Let me just say that I feel like I’m going to be super absent now that t-ball season is here.  I took last Friday off to get stuff done, and it is Sunday night and I am just now sitting down to be able to write this post that I usually write Saturday night or Sunday morning.

But, t-ball might be the best thing ever in the history of the world, so it’s totally worth it.

I seriously can’t remember the last time I laughed so freaking hard.  Holy crap, these kids are funny!

One little boy on the other team refused to run to first base after he hit it; he just pouted himself right off the field.  A boy on our team spent about 4 minutes hitting, finally connected with the ball, and halfway to first base, grabbed his crotch and said “I have to go potty”.  The same little crotch grabber was standing on third base waiting for the batter to hit.  The ball was hit right past third base, and rather than run home, the little guy jumped on the ball and tried to tag himself out.

Jack’s team bats in numerical order based on their jersey number.  Jack had chosen #3 (after Russell Wilson), so he got to hit first.  His first whack at the ball knocked over the t (tee?), but his second hit went clear out to right field, rolling to the fence.  I knew the t ball scouts were paying attention to that one.  Then, his team took the field, he was in the “pitcher” position, and the team we were playing would only hit right to the mound.  The second crack off of the t was a low pop fly, and like something out of the tball World Series, Jack jumped and caught the ball in a flying leap and landed on the grass with the ball still in his mitt.  Where that came from, I have no idea because during their one practice, he couldn’t even stop a grounder.  I knew then, the scouts were REALLY interested.

He then proceeded to stand up, look around, and quickly realized he had no idea what to do with the ball.  So, like any self-respecting five year old “all star”, he began to dance like a monkey.  Right there on the pitcher’s mound.

I have a hacking (five packs a day sounding) cough right now, and was acting as the left field coach.  I started laughing so hard and couldn’t stop and was so doubled over trying to catch a tiny bit of air.

It only improved from there, and I pretty much am in love with tball.

Want to know the coolest thing ever?  When Jack and I went to sign him up for tball, some time back before Christmas, there was a little girl who came in as we were leaving.  She was clearly uncomfortable and didn’t want to be there.  I crouched down and said “are you here to play tball?  I played tball and it’s best thing ever.  You’re going to have so much fun.  And you know the best part about tball?  You can kick all the boys butts”.  Her mom smiled at me, and then we walked out.

Well, we show up to the first practice, and the see the little girl there and her moms.  Not only is she on our team, but one of her moms is the coach!!!  Her mom that was with her at sign up said “hey, that’s the nice lady who is responsible for you being here today”.

Now here is the best part of this story.  While I was standing behind the little girl as a base coach on Saturday, I heard her say to no one in particular “this is so fun”.  Made my whole year right there.  No one is keeping score, half of the kids didn’t want to run to the base, and no one knew the rules, but they were having fun.  Love it.  Tball convert over here.

I came home on Monday, and Troy and my father-in-law had done this: 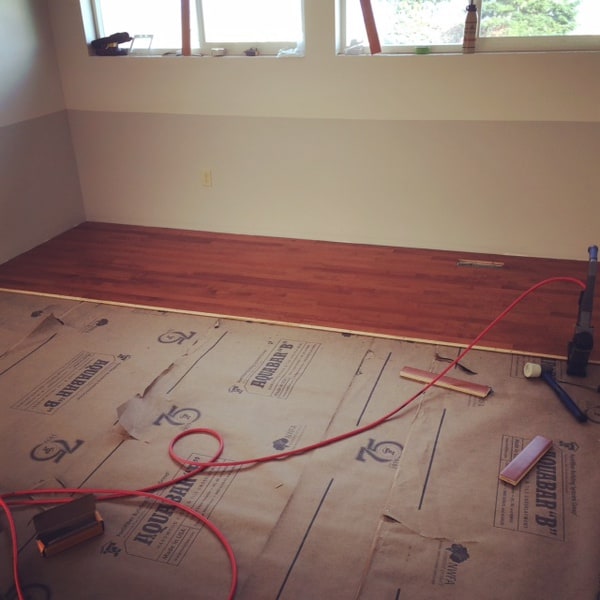 And then Tuesday afternoon they had done this: 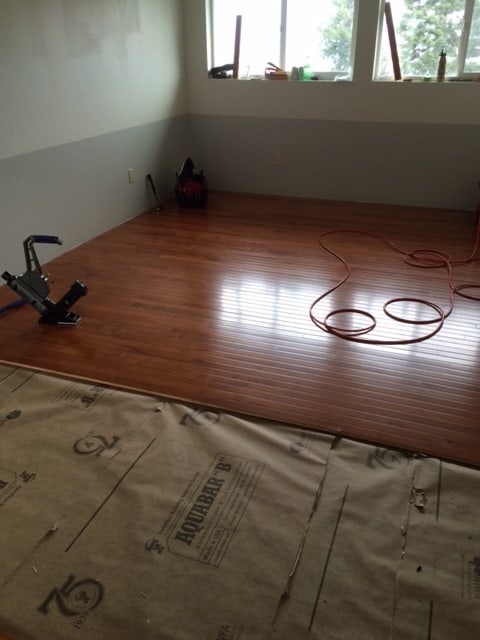 And then Wednesday afternoon, I did this:

At long last, our room is done!  They (Troy) still have to finish our closet, but the room is livable!!!  We hosted Sunday dinner at our house to bribe people to help us move out of the cubby to a legit bedroom.  We needed the bribe, because we have the world’s heaviest, most awkward mattress.  I’m not lying, it is likely trying to move a giant duffel bag full of 15 Andre the Giants.  We got it all moved, and the family earned their grilled chicken and homemade garlic bread.

The closet isn’t finished, so half of our stuff is still in bags (most of it is actually in the attic), there are still boxes of hardwood in there, there is trim work to be done, the windows don’t have windowsills, and some of the windows don’t have curtains on them yet.  So, no “big reveal” at this time, but just know that I love it more than I could ever imagine.  Troy and his dad did excellent work, and I’m sure they’re looking forward to doing the rest of the upstairs.  :eyerolling, vomiting emoji here:

Meal plan time!  I’m too tired to also do a Grocery Challenge update tonight, so I’ll do another post later this week.

Wednesday:: Arroz con pollow, frozen peas (we’ll heat them up, don’t worry), and black beans (this didn’t happen last week as we had to make an evening run to Target for a rug)

Thursday:: Dinner at my in-laws

Saturday:: Popcorn, and then off to a late night glow-in-the-dark Easter egg hunt.