You should see my fridge right now.  I’m pretty sure I have over 100 eggs in there.  The milkman deliver my normal order (3 dozen) even though I cancelled it.  I didn’t realize this until AFTER I went to the farm where I get our milk and also picked up eggs.  Given all the eggs, you’d think I would be having eggs every since night for dinner this week?  Not necessarily so!

We do however have a frittata on the menu.  That damn frittata shows up every week and never gets made.  Why?  Because I keep putting it on a Friday.  Come Friday, I never want to actually cook, so Jack and I make popcorn, and have popcorn and fruit on the couch and watch a library DVD.  Going forward I’m just scheduling popcorn for Fridays!

Here is what we’ll be eating this week:

Wednesday:: Pasta faguoli (I never know how to spell that) in the crockpot, paninis, and salad

This week I spent $41 on groceries (holy hell matzo meal is expensive!!!!) and $18 on raw milk and eggs.  $4 of that was for eggs for my aunt and uncle.  I accidentally also spent $12.98 on eggs delivered from the milkman.  Whoopsie. 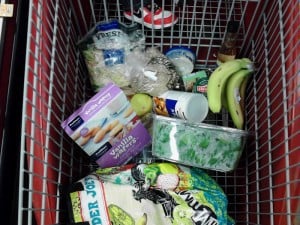 Someone Troy works with did a huge favor for us.  As a “thank you”, Troy told him that I’d make him his favorite dessert.  The guy said he likes pie and vanilla wafers and Nutella.  Not a lot to go on there!  I put the vanilla wafers (pictured above) in a food processor to crumb them, and slowly added melted butter until it became a dough.  I pressed that in to a pie crust, and filled it with this recipe.

Perhaps one of the unhealthiest things I’ve ever made.  But, when you give me a list of random things you like, I have to get creative!  Did you notice the EIGHT egg yolks that recipe called for?  Good god!  I couldn’t let those egg whites go to waste, so I made these last night with the leftovers.