Phew, there is a special kind of smell when it comes to tonsil surgery.  I’ve been sleeping in Jack’s bed with him since Wednesday, and once he falls asleep, I crank up the Kindle and get some reading done.  I recently finished Gone Girl (downloaded for free from our regional library).  Whoa.  Just whoa.  Crazy book!

Anyhoo, Jack is great during the day, but spikes a low-grade fever every night (normal after this surgery) and gets really clingy.  Friday night, he spent from 10 pm – 1 am sleeping on my chest crying on and off.  His breath is so stinking rank right now.  He is feeling up for brushing his teeth, but the scabs from the surgery smell like what I am assuming a diaper filled with rotting fish would smell like.  It ain’t pleasant.

We bought Jack’s big boy bed because it is a twin daybed.  The thinking that two twin beds would come in handy.  Somehow, with us each having our own twin bed, I still find myself on the very edge of the bed trying not to fall off.  How in the world do kids do that?  How do they sleep sideways??

The snoring has pretty much stopped, but the heavy breathing continues, and I’m guessing will continue until everything is healed up.

I think Jack will be in for a shock after he has recovered and is no longer allowed to lounge on the hide-a-bed couch and watch TV all day. 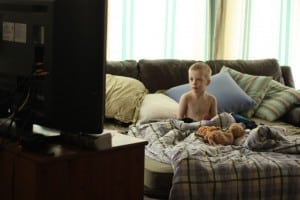 So you know how sometimes you wish something would happen, and then it does, and then you’re like “oh crap, I didn’t REALLY mean it”?  Yeah, that was me Saturday morning.  You may remember my rant about our piece of crap side by side fridge?

Thursday, I made some chocolate ice cream, and put it on our un-used ice shelf in our freezer to harden.  Two hours later, it was almost liquid.  Friday night, Jack’s throat was hurting, so I went to get him a popsicle.  I thought it was weird that it was so mushy.  Saturday morning, I put my candy thermometer in our milk, and was a bit dismayed to find it was 60 degrees.

Of course I wanted a new fridge.  But I didn’t want it on these terms.  We were saving for a potential fall purchase.  I wanted the time and luxury to pick out exactly what I wanted.  I wanted free delivery so that they would haul the beige beast away.  I did not want to find myself running in to Lowes saying “which ones do you have in stock RIGHT NOW” in panic mode.

I did NOT want to throw away $7 of raw milk, $15 of delicious Tillamook cheddar, and other miscellaneous items.  Balls.

I found a french door stainless steel fridge that was lovely and everything my dreams were made of.  It was waaaaaaay out of my price range.  However, I noticed a “discount” tag on it because of cosmetic damage.  A scratch on the side, and a ding in the back brought the price down $600.  For scratches.  Sheesh!  The local energy company threw in a $50 rebate, and Lowes is sending us a $120 giftcard.  Still not exactly how I wanted to do things, but it is what it is.  Some people may be able to live without a fridge, but I am not one of them. 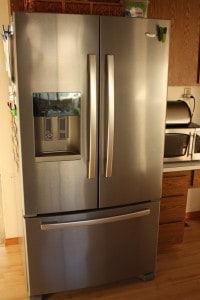 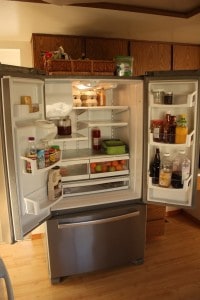 My meal plan this week isn’t much of a plan.  I’m only working one day this week, and I’m just kind of winging it.  Dangerous.  I’ve been eating quite a few dinners of scrambled eggs with a slice of toast.  Without having to plan for leftovers for lunch the next day, I’m not feeling creative.  Plus, Jack gets whatever he wants for any meal until he is 100%, so I’m left fending for myself.

I do know we’re going to have crockpot french onion soup (I could easily eat this twice a week for life and be a very very happy girl) with no knead dutch oven bread, and salad.

We’ll also clean out some soup in the freezer because I am pretty sure the quart jars are down there breeding.

We’re eating at my in-laws one night, and if Jack is up for it, we’ll try out the return of popcorn for dinner.  It’s popcorn, leftovers, cheese slices, fruit, and cut up veggies.  Everyone gets as much as they want, and no one leaves hungry.  I adore popcorn dinner because it is the easiest night of the week for making everyone happy!

Thanks to my 65,701 whole chickens in the freezer, we’ll be having a roasted chicken as well.

I also have grand plans to make a crockpot full of chili at some point this week.  Though, doesn’t that kind of counteract my desire to de-soup the freezer?

I don’t want to add up the groceries we have to replace during our Costco trip this afternoon.  Le sigh.  So much loss.