March came in like a lion, and we’ll just have to see if it goes out like a lamb!  We had snow on the ground at the start of this month.  It was beautiful, but disappeared very quickly!

Here is what we’ll be shoving in our foodholes this week:

Monday:: I’m working very late, but we’ll enjoy Shepard’s pie that I made this weekend.  It will be paired with dutch oven bread if there is any leftover from Sunday dinner at my parent’s.

Sunday:: dinner at my parent’s. 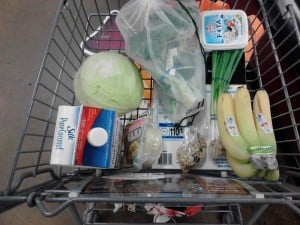 We also hit up Costco and spent $106. 74 on Tillamook cheddar, mozzarella, wild caught Alaska salmon, pecans (walnuts were on the list, but they jumped a huge amount in price and were more expensive than the pecans), organic carrots, frozen blueberries, and pineapple.  The entire bill was paid for using a Costco giftcard.