Ok, so as promised, here is my total spend on groceries last week:

We also spent $15.59 for a liter of the cheapest vodka on earth, but since we aren’t drinking it, I didn’t include it in the grocery total.  It’s for a batch of homemade vanilla extract for Christmas gifts, so the price came out of our Christmas budget.

If you follow me on Facebook or Instagram, you’ve already seen the photo of the three female peacocks that were grazing for bugs in my yard last week. 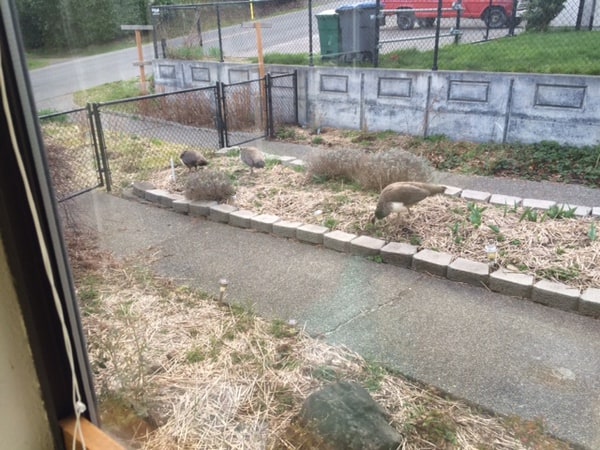 The momma and her ex have been mainstays in this neighborhood for probably 15 years.  Last spring, the momma showed up with three little ‘cocks (hee hee), but some time last summer we noticed only two babies were left.  Sad day.  They weren’t around too much in the winter, but now that the sun is shining often, we’re seeing the momma and her babies out and about more and more.

The peacocks are excellent for pest control, and never damage the crops so they are welcome additions to my micro farm.  If only they would pull some weeds while they’re at it.  Do you see all those green spikes by momma peacock’s butt?  Those are tulips that are usually coming up at the end of March/beginning of April.  My dad carpet bombed the garden with bulbs and wildflower seeds before he and my mom moved out in 2007.  Every single year I pull out all the tulip bulbs after they’re done blooming, and declare it “at last the end of the tulips”, and BAM the next spring 20 more pop up in the exact same spot.

I’m not anti-tulip at all, and would actually plant some myself in the fall if I wasn’t so lazy by the end of the harvest season.  I just hate these tulips because only about 20% of them actually have flowers.  The rest are just leaves that are total teases and look like weeds.  You know, because all the other weeds currently living in my garden would get jealous.

Can you see the strawberry plants in the background?  I planted 25 bare root strawbs last spring, the chickens got about 10 of them, and the rest of them have totally grown and covered that part of the garden in a strawberry carpet.  I can’t wait to see what June is like in our yard!  We’ll probably still have to go to the u-pick farm this year to get enough for jam, but the fresh eating should be excellent on the “upper 40” of the micro farm.  As in the upper 40 feet.  Cause this place is small!

I worked yesterday from 6:45 am – 4:45 pm.  It was a gorgeous 60 degree sunny day, and I was stuck inside being resentful.  Troy and Jack had boy day, and when I got home, Jack said “daddy gave me three fruit rolls (natural fruit leathers from Costco), two root beer suckers, and a chocolate milkshake.  My day was AWESOME”.  He then acted like a cracked out meth head for the rest of the night.  He had a total breakdown at bedtime because he wanted the Seahawks pillowcase off of his pillow to just sleep with the bare pillow. He is a total sweatball and loses about 3 pounds of sweat every night.  We told him he could, but then five minutes later he was sobbing because he wanted the pillowcase back on because “I need a decorated pillow mommy”.  Oy, I’m not good with these erratic mood swings.  Most days I feel like I actually did birth a little girl.  I have no idea where this drama comes from.

Saturday:: My nephew is spending the night and has requested popcorn and pizza (but don’t tell him we’re only making popcorn).  We will then take him to church the next day and he will spend 60 minutes yelling “I am WHISPERING AUNT SARAH”.

Sunday:: Family dinner at my parent’s.  This week I am contributing dessert; an apple crisp.  I have the canned apple slices downstairs, and will just do a topping of oats, brown sugar, cinnamon, and butter.

I’m a bit annoyed at the amount of meat we’re having for dinner this week.  I typically like a mix of meat and meatless meals, but I feel like this week is a bit meat heavy (that’s what she said).  But honestly, I did some piss poor pre-planning this week, so it is what it is.