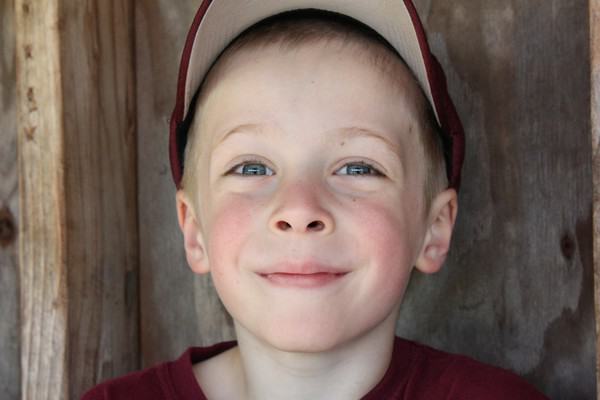 Playing with his nasty loose tooth 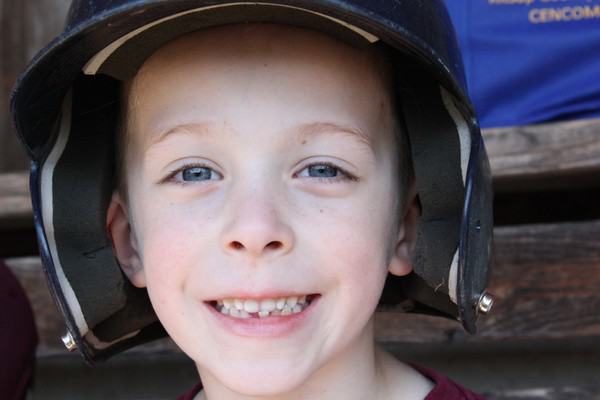 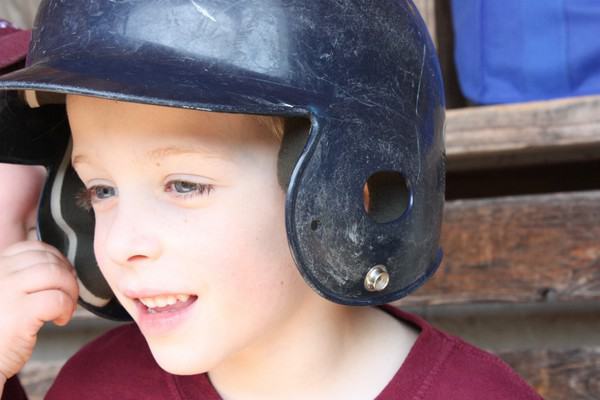 I wish I could share photos of him batting, but they include other people and show the name of his team.  Just picture a really great pro stance, on the body of an albino twizzler with a giant head.  Also, Jack hit the ball over the fence for a t-ball homerun!

We were in-charge of snack this weekend, so I decided on “Cracker JACKS” minus peanuts because of a team member’s allergies.  Not loving corn syrup and all the crap that goes in to caramel popcorn, I used this recipe and it was super easy, and freaking delicious!  To sub in for the missing peanuts, I used yogurt covered raisins from the bulk section of the grocery store.  And satsumas because the kids on our team go nuts over fruit (love that!).  See those little boxes which make me look like that mom who has her shit together?  They’re from the dollar section at Target.  My goal is always to look like I am overachieving, while totally phoning it in. 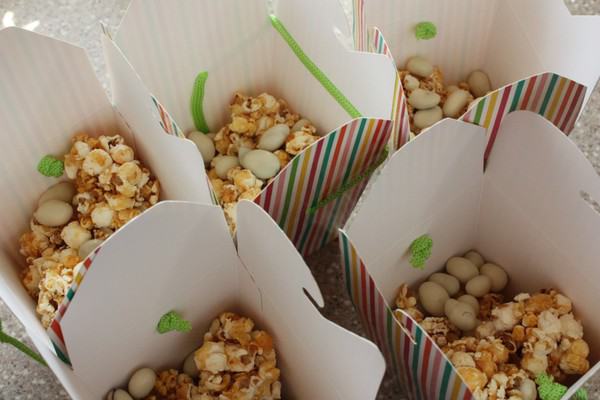 In “parental units living with us (or us living with parental units)” news, I’m not sure if we’re all just being polite and on our best behavior, but things are going well!  My dad recently lost 80 pounds by starting with Nutrisystems which helped him jumpstart his healthy eating habits.  He eats a separate meal from my mom, but has eaten a few meals with us, and a few on his own.  Mom is enjoying the homemade stuff and the lack of microwaved meals.  She came at a good time, because it’s asparagus season in the Northwest.  Delicious stinky pee season.

I was off on Thursday and Friday, because my dad headed out on his bi-annual fishing trip so I hung with mom.  On the way to Target (cray adventure girls!) she said “we need to start paying you for the groceries I am eating”.  I laughed and said “um, not even a chance”.  Mom said “seriously, yes” to which I said ” you don’t eat that much food, so I’m not buying extra food.  We live in your beautiful house for reasonable rent, so shut up and eat your damn asparagus”.  She laughed and we’ve settled THAT matter!

Mom is not someone who gets out too much, but already a week in to living with us, and she’s been to Target, and we strongly encouraged her to come on a “walk” with us.  It was a gorgeous day, and we had a leisurely stroll down to the library and Jack rode his bike while Mom rolled along.  It was so beautiful day, and I think she was thrilled to be out in the sunshine.  The grass doesn’t grow under my feet, and I’m always on the move.  And she’s coming along for the ride!  🙂

Meal plan time! Just a reminder, I only plan dinners, because we have leftovers for lunches the next day, and breakfast is usually something simple like yogurt and fruit.

Monday:: Homemade pizza from the freezer (leftover from Jack’s birthday party) and salad.  I’m working late, so my mom and aunt are chilling with Jack.

Tuesday:: My dad made meatloaf, so the boys and mom will have that along with salad.  I’m working late.  Again.  I’m super thrilled.  And a damn liar.

Friday:: (t-ball night, so no movie night) sandwiches and salads, shoved in to mouths on the way to the game.

Saturday:: Eating out for an early Mother’s Day with Troy’s side of the family.

Sunday:: Family dinner!  No idea what is on the menu, because I am not cooking.  Woot!