When I was 30 weeks pregnant with Jack, my OBGYN ordered an ultrasound for me, telling me that my baby was way too small, my fluid was low, and something was probably wrong.

As a first-time mom, I spent the days between hearing those words and the ultrasound freaking the freak out.  Troy was working the day of the ultrasound, so my sister was kind enough to go with me.  It was nice to have witness there when the tech told me that not only was my baby totally fine, but he was actually large and had a giant head.

And 10 weeks and 4 days later, Jack was born at 8.5 pounds with a 99th percentile head healthy as crap and strong as hell.  Like STRONG.  As in push ups on my chest strong.

At that time, my OB declared I must just be one of those tall women who carries their baby “long” instead of “out”.  Oh and I have a really long torso and a high belly button (seriously, it’s weirdly high) which throws off the measurements.  Well, thanks so much for that information after you scared me shitless lady.

This pregnancy, I went with a midwife.  A woman who schedules hour long appointments instead of five minutes max, and has a less “freaking your out” bedside manner.

So, when two weeks ago, my midwife asked me to get an ultrasound because I was measuring small and my fluid “felt” low, I didn’t even blink an eye.  And for the record, she wasn’t an alarmist and even said “you don’t even have to get the test if you don’t want to”.  I said I would get the ultrasound, but had a “been there, done that” kind of attitude.

I didn’t mention this last week because of those select douches out there who like to judge pregnant women for gaining too much or too little weight during their pregnancy.  Because every single person is textbook and carries their babies exactly the same.  Coughbullshitcough.  I hadn’t yet had the ultrasound during last week’s meal plan/weekly wrap up post, and honestly dealing with any snarky comments was not a game I was interested in playing at the time.

Well, the ultrasound was on Thursday, and all I can say is that this child is taking after his big brother in every single way.  Currently he measuring two weeks ahead, head is 96th percentile, fluid looks perfect, and surprise surprise, I’m just one of those tall women who carries their baby “long” instead of “out”.  And nary a second was spent freaking out about it. And I got to see Bennett one more time before the big event.  He looks like Jack did at this point, and like I am assuming every baby looks like via ultrasound in their third trimester – a perfect mix of cute and freaky alien-like. 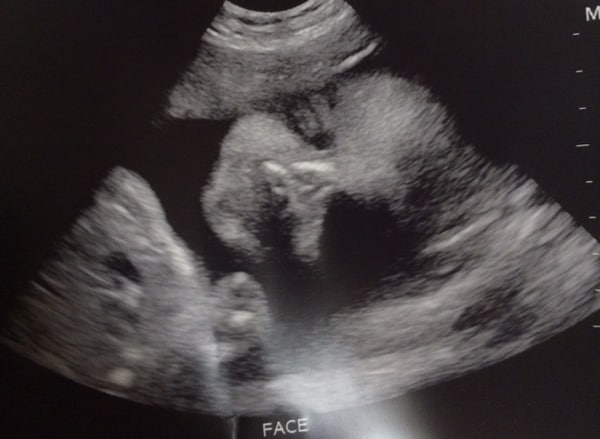 Hey, remember that time that I fought off a raccoon with a sword while Troy watched naked and helpless from the bedroom?

No, you can’t remember that because that isn’t actually what happened.

The actual truth is that two weeks ago, Troy was getting ready to take a shower, and happened to look out of the bedroom window to see a raccoon in the chicken’s yard.  We know we have a few raccoons around here, and honestly they have never bothered the chickens before.  I’ve seen a family of them walk by the chicken yard and not even glance twice at the occupants.  But a raccoon IN the chicken yard was a different story.

Troy, being indisposed, was not an option for chicken defense, so I threw on my Boggs (crazy comfy gardening and chicken boots that I keep on the front porch), grabbed a weapon that was nearby (golf umbrella), and ran out to defend my fluffy butted protein machines.

They were doing an excellent job of scaring the crap out of the raccoon and were flapping and screaming at him, but no doubt that he would have eventually overcome that fear and had a delicious free-range chicken breakfast.  I rushed him with the umbrella and scared him away.  About 10 minutes later, he was back.  Now, instead of letting the chickens out in the morning, we have to keep them locked up until late morning.  If Troy isn’t home for the day, they stay locked up all day while I am at work.  They have plenty of room (our coop is pretty much a chicken palace), but I know they want to be outside hunting and scratching.

But the important part of this story is that Troy and I need to discuss why he is standing in front of the window naked.

Troy and my father-in-law spent six hours on Friday putting in trim and molding around the doors and floors.  I came home on Friday and said “we no longer look like hobos with nice floors.  We look like adults”!  They’re going to finish the job up tomorrow, and then Troy “gets” to caulk around the top.  It’s strange because the beautiful white trim makes our very white walls look like they are a light tan.

Friday night, Jack spent the night at my in-laws, while Troy and I went to dinner and to see Spectre.  Well, Troy had dinner.  I was that chick who just ordered a salad.  I hate those chicks.  We had a big lunch at work on Friday and I just wasn’t feeling 100% at dinner, so I thought something light would be just the ticket.  I planned to eat gummy worms and popcorn at the movies. Because I like a balanced meal.  Three gummy worms later and I was done.  I spent the rest of the night feeling gross and like I was car sick.  It took about 24 hours to go away, but blech I felt rough. 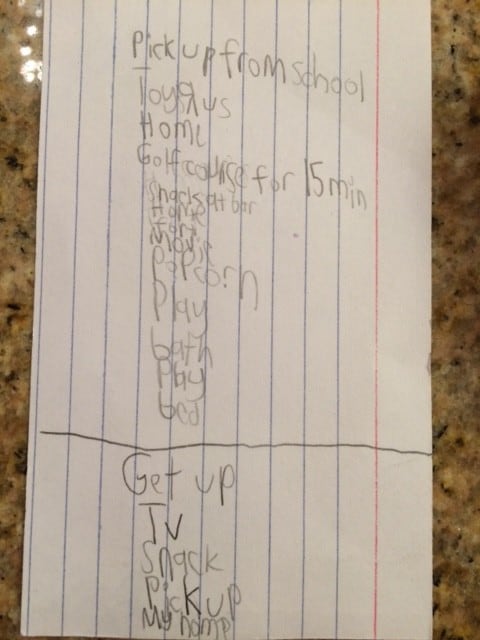 And then my mother-in-law sent us this photo: 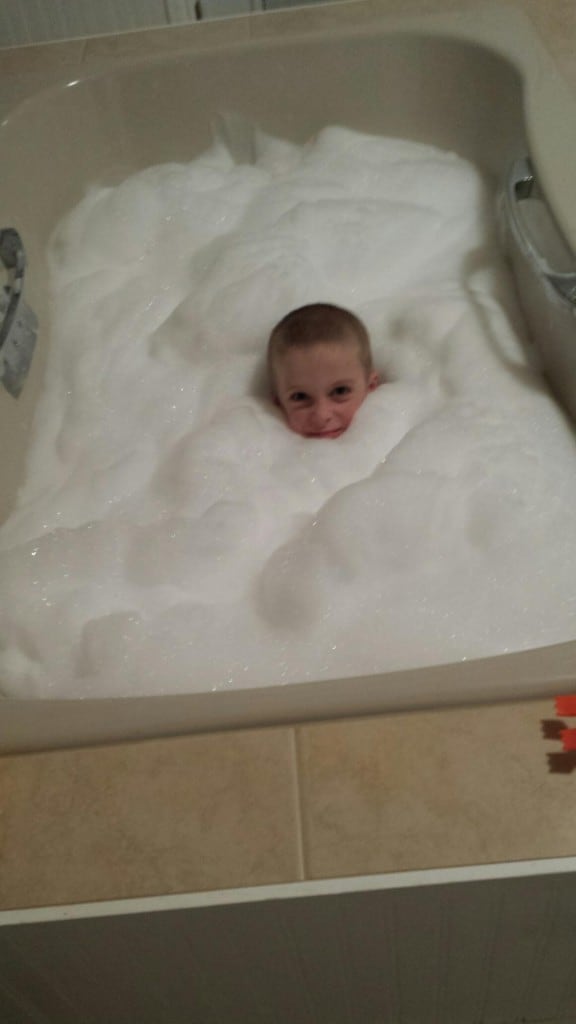 Apparently after his giant bubble bath, they transferred all the bubbles to their big shower, and he made bubble snow angels and took a shower.  My father-in-law said he used the entire tank of hot water.

After the sleepover, we met my sister and nephew for flu shots.  Always a good time.  My nephew has asthma, and can’t do the flu mist.  Jack decided to be a kind cousin and get the “pokey” instead of the mist in solidarity with Parker.  I was so proud of his kind heart and love for his cousin.

Meal plan time!  Lots of potato dishes this week, because Fred Meyer (grocery store) had 5 lbs of organic potatoes on sale for $1.99; usually $3.99!

Monday:: I’m working late, but Troy is serving up baked potato soup that I am making tonight, along with salad.  I was going to make this on Saturday, but I felt kind of crappy, so we just had popcorn and watched a movie.

Thursday:: Taco bowls and salad.  I really don’t like salad.

Saturday:: To be determined