This post almost didn’t get written for two reasons.

1) We were sans power for almost all of Saturday.  It was crazy windy in the Puget Sound area (if you’re looking at a map of Washington, the Puget Sound is that weird chunk missing in the left part of the state), and the power went out in the morning.  In a mile in every direction, homes and businesses had power, but not us.

Jack and I escaped to my sister’s where she had heat, electricity, and a three year old to occupy Jack.  And part of having electricity meant having access to digital music channels.  The preschool dance party was a rager.

2) I was nearly arrested for murder this morning.

I stayed up until past midnight canning 60 pounds of apples (yield: 22 quarts of applesauce) and had a crappy night of sleep.  6:30 am, my phone rings.  It’s Troy.  Ding dong doesn’t have a normal life, and he forgot that I do.  And normal people don’t work on Saturdays.

The phone call woke Jack up, and thus I was up for the day.  He watched some toons in my bed while I tried to fall back to sleep, but it wasn’t happening.  I was cheesed off to the nth degree.

Last week, my newest little goddaughter was baptized.  It was a traditional Lutheran service (think lazy Catholics), and much longer and more formal than our own church.  It was a lovely service, but Jack was pretty tuckered out by the end of it. 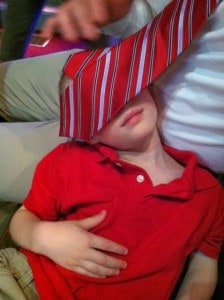 Later, the family and friends met up at a Mexican restaurant for a small reception.  Troy, decided to keep Jack occupied by creating the freakiest tortilla mask that was a cross between The Elephant Man and The Man In the Iron Mask. 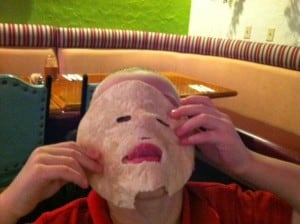 Halloween was a mixed bag.  We were all ready to go out dressed as Hulk, and at the very last second, he decided that he needed to be a Power Ranger.  Thank goodness multiple costumes are always in rotation in this house. 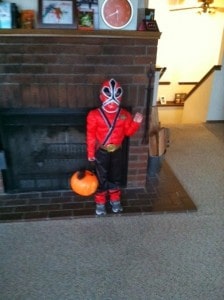 The second house we visited had a large dog that rushed out of the front door at Jack.  Jack is realllllllly nervous around big dogs.  It was a pit bull; something I didn’t realize until I had picked Jack up and he was wrapping himself around my neck.

The woman apologized and said she thought it was her husband.  I wanted to ask her if her husband knocked on his own front door with a tiny fist while yelling “trick or treat”?  If you have a dog, any dog, and it’s a day when kids come to your front door, take care of your damn dog.

After that, Jack was scared of most of the houses, and we had to call it a night shortly thereafter.  So we were pissed.

Someone on Facebook asked me if I would have reacted the same had it been a Jack Russell and not a pit bull.  The answer is yes.  Jack is scared of big dogs, but even little dogs make him nervous.  My sister-in-law’s three poodles still make him jumpy.  So, yes, any dog that comes at my kid and makes him want to stop trick or treating would piss me off.  Pitbull or chihuahua, it doesn’t matter.  Lunge at my kid and you might find my foot in your ass.

When we got home, Jack said “the Candy Fairy will be so proud of me”.  He had a decent amount of candy, and declared it “enough to power Candy City for a long time”.  The Candy Fairy left him some action figures that he had picked out previously and emailed to the Candy Fairy. 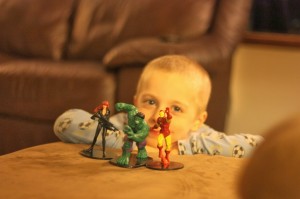 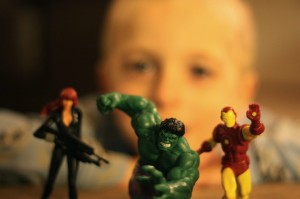 I figure this is the last year the Candy Fairy can probably make an appearance at our house.  Sigh.

Monday:: I’m working late, so I’m going to find something from the freezer later tonight to defrost.

Tuesday:: Quiche, and Brussels Sprouts.  Random combination, but it works.

Friday::  Popcorn dinner.  Yes, seriously we eat popcorn for dinner.  It’s popcorn, leftovers, cheese slices, fruit, and cut up veggies.  Everyone gets as much as they want, and no one leaves hungry.  I adore Fridays because it is the easiest night of the week for making everyone happy!

Sunday:: Family dinner at my parent’s with extended family.  The menu gets hammered out via email during the week – my dad makes the main dish, and we each contribute sides.

This week I spent about $35 at Costco, $3.50 for raw milk, and I have no idea how much at the grocery store (though not much is on my list).  I plan to go shopping after church later today.  With not having power yesterday, I didn’t feel the need to buy groceries and then bring them home to a kitchen without a working fridge.

What are you having for dinner this week?
originally posted on November 3, 2013; Updated on November 15, 2018
6 Comments//Leave a Comment »
Categories: Meal Plan
« Previous PostMy Favorite Spices – Let’s get spicy!
Next Post » Jesus’ Thank You Note