After two long months, my Dad’s shoulder is back to normal (as normal as he’ll ever be)! He is back to assisting my mom with wake up and bed time stuff.  It frees me get more done at night (see below), but the big winner is probably my mom.  She no longer has to adjust to my wonky ass schedule, which over the course of the last two months has entailed: getting home past 8 pm because of work, having to get up much earlier than she would prefer so I can go to work, and trips out in the evening over 10 days to take care of a friend’s doggy while they were on vacation.

Normal is good for everyone these days.

Speaking of having a bit more time in the evenings, the first night my dad said “we don’t need you anymore”, I did this: 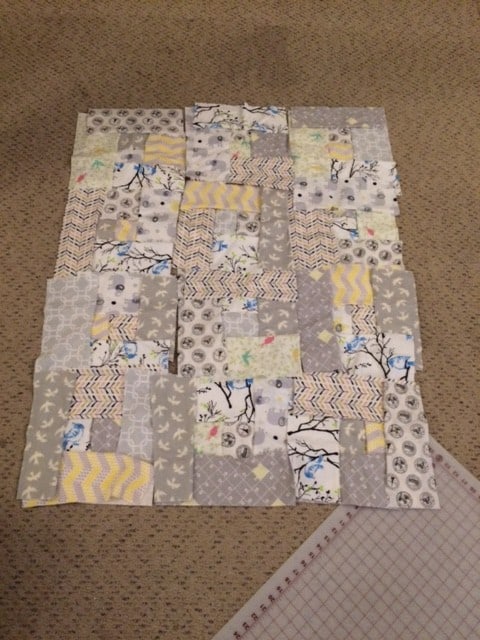 Love our super stained carpet? Yeah, me too…

It’s just pinned right now, and I’ll have to sew the fabric on to the squares (doy), and then the squares together (duh), but I got it done in one night!  It’s a surprise for friend who is due on Veteran’s day.  She told me the colors of her nursery, and I went and got the fabric.  To me, it’s kind of a snooze, but it sounded like it matched her theme.  The night I pinned the quilt, she sent me a belly shot from her own bedroom, and I almost fell over because all the fabrics I picked also matched her room exactly.  Nailed it!

Today, Troy and my father-in-law will be ripping up all the rest the carpet in the house.  The end is in sight, and I can taste the sweet sweet fact that we’ll have all wood floors upstairs by the end of day Wednesday.  That’s right – WEDNESDAY.  After a long 10 months of installation, following a long 12 months of construction on the house.  Troy has been scraping popcorn ceilings like a mo’fo, and thankfully that job is done.  Fun fact: after you scrape popcorn ceilings, your house smells like a wet dog for at least a month.  Delicious!

This week he’s off for five days, and will finish texturing the ceilings (just normal wall texture…not more popcorn) and then painting them.  After the floors are done, the fun details begin – trim along the floors, trim around the door in the dining room (that has been ripped off for over a year now because of the deck needing to be redone before my parents moved in, and looks horrible), and new doors for the rest of the rooms and the bathroom in the hallway.  And one of these days, we need a door for the bathroom in our bedroom.  Because yelling “I’m in here, stay out” when you hear footsteps is getting old.

To sum it all up: Troy hates me with a passion right now.  And wants to go live in a tiny house where he doesn’t have to fix anything.

But if he was gone, he would have missed the fact that we got a new chicken yesterday! 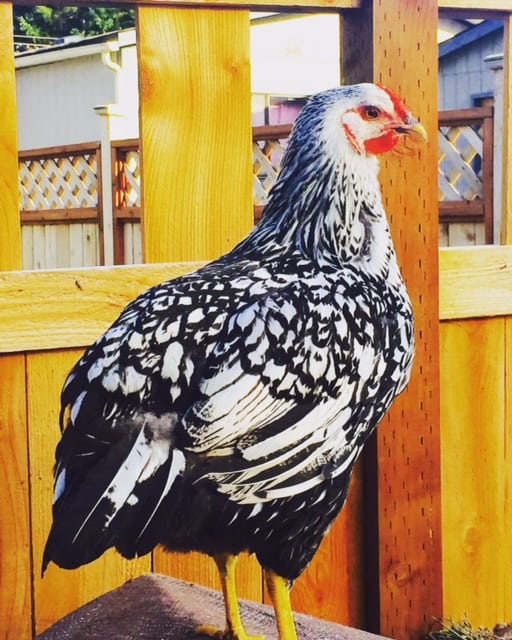 She sure is a beauty, huh?  I mean, for a chicken.

Troy’s cousin owned her, and posted on facebook that they needed to get rid of her because the rest of their flock was picking on her.  We’re hoping she fares better with our girls.  For one thing, our coop is a bigger, so there is more room for them (closed quarters makes chickens more likely to get “cooped” up and bitchy), and our girls have a large run.  Right now, Big Dot is quarantined from the rest of our flock in the coop.  Troy built her a nice little wired off section (more projects for Troy…) with a roost, her own water, and food.  She’ll live there for a week or so while the other girls get used to her, and then I will sneak out there one night and put her on the roost with the others.  That is how we handled adding our two new girls last year, and fingers crossed it goes as well this time.

I ended up taking my new computer back last week.  I just cannot handle Windows 10.  It is literally the worst.  It caused the mousepad to zoom around the screen on a moment’s notice and f up everything you are writing.  I wanted to throw the computer out the window about every 12 seconds. I know it is a Windows 10 thing, and not a computer glitch, because as soon as I upgraded to Windows 10 on my old computer, it started happening.  After a week, I uninstalled it, and the problem was miraculously solved.

I returned it and got a slightly more expensive one that had more bells and whistles (that I didn’t care about), but only had Windows 8 on it.  It was heavily discounted from where it should be because it was running the old version of Windows.  Hell, I’d love if it had Windows 7 on it instead of all this weird icon tile crap on the screen.  But, the zooming and zipping mouse problem is gone.

Monday:: Gnocchi and salad.  Jack is no longer hating every single kind of pasta I put in front of him, and as long as I market gnocchi as “little dumplings”, he is good to go.

Tuesday:: Beef stew in the crockpot, and dutch oven bread.  Here is something weird about me.  I like soups and stews with meat flavoring in them, but honestly could do without the meat.  A chunk of beef in there for flavor and the removed before I gorge on the beefy potatoes and carrots is my idea of heaven.  I’d rather leave the chicken out of chicken noodle soup, and just enjoy the flavoring from my homemade broth.  Troy of course would have none of this.

Thursday:: Breakfast for dinner.  Because by Thursday, I’m totally phoning it in.

Saturday:: We’ll either go out, or clean out the fridge.  Depends on how motivated I am to put pants on.  Truth.  Priorities.

I have not yet gone grocery shopping, because Saturday was too jammed with a haircut (for me), a doctor’s appointment (which is what I call getting a massage since insurance is paying for it), and chicken adopting.  My list is very small this week, and I am thankful for that since I totally went overboard last week!