I’ve received a few emails from my dad since last week’s big garage clean up.  He can’t find things that I organized, so I get asked where things have moved to.  This was a recent one:

“The only other things I can’t find are all my trophies.  I had a bunch of them all over the place.  There were hundreds, all field dressed and ready to be displayed on the special Brazilian hardwood I ordered.  They are small and black with wings.  Those skins were very labor intensive to tan and any stuff”.

What in the world did I throw away?  I couldn’t remember anything like that!

My response: “I never saw any trophies, let alone hundreds of them”.

Dad: “The “trophies” were the bugs.  Your mom didn’t get it either”.

Well, it is plain to see where my “humor” comes from.  Pfft.

Last weekend I went and got a few garbage bags of apples off of freecycle.  I finally canned them Friday night and got seven quarts worth.  It isn’t the tastiest applesauce I’ve ever made, but as Troy once said while eating some ice cream that I made that wasn’t great “hon, you know what my favorite kind of ice cream is?  Free ice cream”.

Wednesday morning, I showed up to my aunt and uncle’s house (they take care of Jack while I’m at work) at the usual time, only to find a completely dark house.  Right at that moment, I realized my worked hours were adjusted for that day, and I wasn’t supposed to be to work until an hour later than normal.  I wanted to cry.  I had gotten up at 4:30, but could have slept until 5:30!

Also, I now had an entire hour to kill.

Jack and I decided to go to breakfast, and I can’t even being to explain to you how gleeful he was. 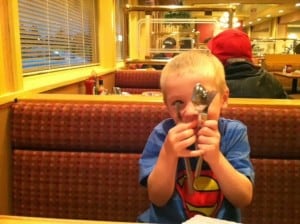 Saturday, my nephew and sister came over for the day.  My brother-in-law has been hunting for a few days, and my sister gets stir crazy like I do without enough adult interaction.  The boys had a blast, despite the fact that my kid spent half the visit in time out.  The rest of the time, the two were wrestling and being freaking crazy three and four year olds.  I swear, I will never understand boys.  What compels them to just pummel each other for extended periods of time?

Saturday also found me up to my elbows in chicken shit.  I decided to spend what was rumored to be a nice sunny day (a lie) deep cleaning the coop.  Everything I’ve read said this should be done about twice a year, and we’ve had the ladies for going on almost six months.

During the clean up, our biddy hen, Poo Poo Sandwiches, is a freaking brat.  She spent about half the time all up in my grill and was being really aggressive.  Usually, a nudge or two from my boot keeps her away, but dang, she was relentless.

Let me tell you, there are few things in life more satisfying than spraying a naughty chicken in the butt with a hose.  She kept her distance after that.

Saturday:: I’m going to force Troy in to making his delicious burgers.  They’ll be served with sweet potato fries and salad.

Sunday:: Family dinner at my parent’s with extended family.  The menu gets hammered out via email during the week – my dad makes the main dish, and we each contribute sides.

What is on your menu this week?