The floors are done.

I repeat, the floors are DONE.

I left a house locked in the 70’s on Wednesday, and came home to a modern abode.  If you ignore the fact that there is no trim yet,our stuff is everywhere (shoved in to the nursery, which you got to see if you follow me on Facebook), and chaos still reigns.  We’ve been living in construction/remodel mode for 18 months now, so what’s another few weeks (god willing)?

The space was a total mess after the install; sawdust, scraps, and just little things everywhere.  I got out my beloved Shark vacuum, and using the hardwood floor attachment (it’s like a long wand with almost a mop head on it and a microfiber pad.  It has a little hole in the front to suck up debris, and the microfiber pad buffs the floor.  It’s magic, and my floors always look so sparkly and shiny afterward.  If you click this link, there are photos of the vac, and the third one shows the hardwood attachment. It’s funny because as much crap was on the floors, the vacuum canister barely had anything in it when I was done.  Compared to when I would vacuum the carpet, and there would be so much dust and dirt sucked up.  #carpetisgross.

We had bought a new couch from Costco months ago, and was storing it (in three giant boxes) in my in-laws basement.  We gave away one of our other couches to Troy’s cousin, and sold one to the creepiest guy ever on Craigslist.  It was the weirdest phone call when he rang asking about it, and I sent Jack downstairs to be with my parents (Dad was on the alert.  Two stomps meant “get the shotgun”), and Troy and I stayed upstairs.  After he left, Troy pulled a screwdriver out of his pocket.  You can never be too prepared apparently. Troy and our friend went over and got the new couch on Wednesday night, and we were so excited to set it and stop sitting in camping chairs.  Klassy.

Jack of course was excited about the boxes.

When we bought the couch this summer, we knew it would be longer against one wall that our old couch.  When it got set up, I um…hated it.  I love the actual couch; it’s super comfy and the color is lovely, but…it was just so big on one side and small on the other.  That’s what she said.  We had looked for something that was going to be long under the two huge front windows, but nothing was available in our price range.  But the current layout makes the room look disjointed to me. 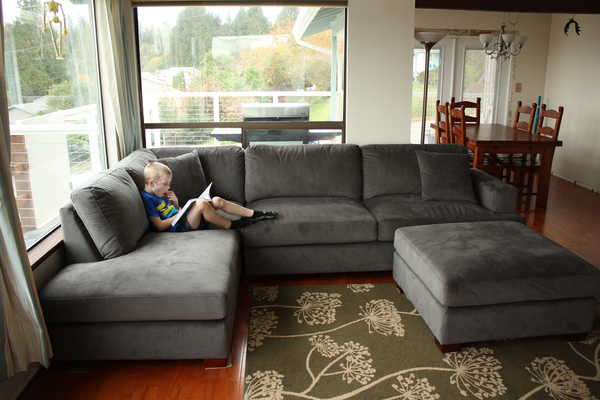 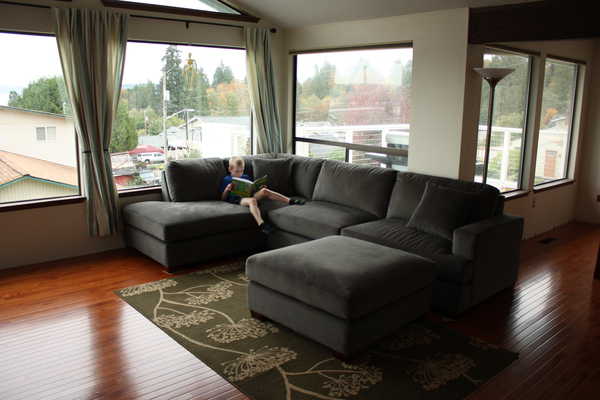 Total first world problems, right?  New couch was too big in my living room on my new floors?  Shut up Sarah.  I know, I hate me right now too!

Knowing that we had looked for months, and that was the only couch we had found in our budget that we liked and was comfortable, I resolved to just shut my damn mouth and live with it.

Then, the next afternoon, I walked up the stairs after work and it HIT me like a ton of bricks.  The solution.  No, not how to solve the Middle East crisis.  I’m talking about important things people!  With most sectionals, they have these little metal clamp thingies that connect the two pieces together.  My idea was to buy some of those clamps and attach (well, let’s be honest, Troy is of course going to do the work) the ottoman to the end of the short section of the couch to make it seem less “off balance”. 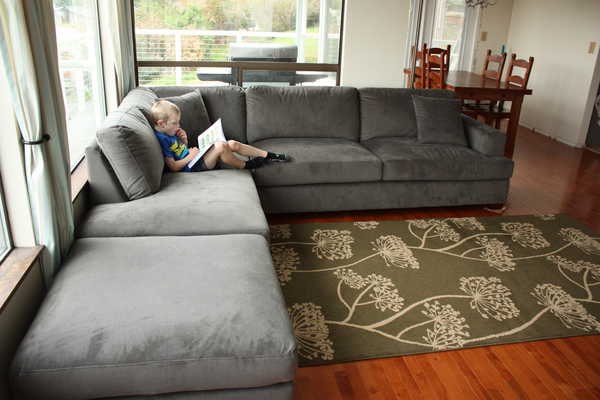 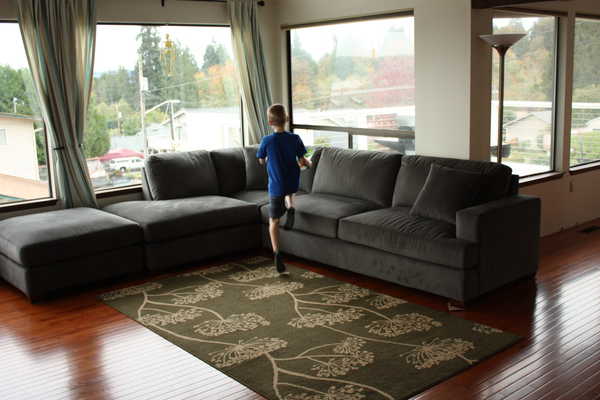 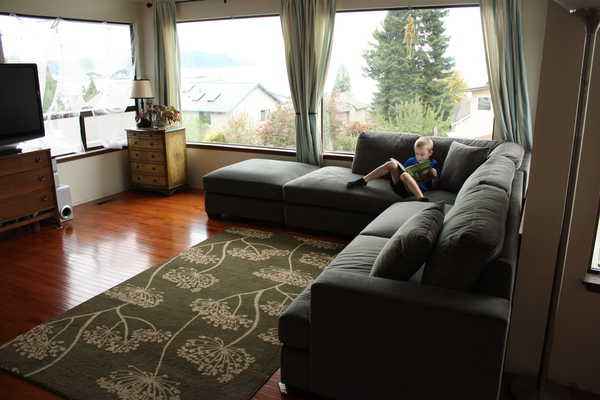 And then, we’ll find a smaller storage ottoman from somewhere (Home Goods, TJ Maxx?) and put it where the ottoman used to be for the couch.  I am very anti coffee table, but I can get on board with a storage ottoman.

We brought up that rug from its home for the last four years in our basement shower.  We had it in our last apartment, but it seemed silly to put a rug on nasty carpet in our new place, so it has been hiding, just awaiting its triumphant return to a non-spider infested black hole.  At some point in the distant future, I’d like to get a different rug; something with more color.  Something fun. But, you can’t beat the price of this rug (free), and so it stays.

However, you can see the “problem” right?  The curtains look terrible with it, and without the couches in front of the curtains like they used to be, you can totally tell the curtains are “high-waters”.  We just so happen to need four curtain panels in other areas of our home, so I’ll use these in another capacity, and will be on the lookout for some 96 inch curtains that are: fun, not dark, light-blocking/thermal.  Someone go ahead and find those for me, m’kay?

The generic throw pillows that came with the couch are super comfy, but so so boring, so I’m going to get some fabric and make pillow slip covers.

Shut up about the damn couch you say?  Roger that!

Our sweet new foster chicken has laid three eggs since moving to our coop; Downton Eggy.  She was picked on at her last home, and so far we have had her separated from the rest of our flock so that they can get used to each other.  Operation IntEGGration took place last night, and we’re hopeful that she will be accepted, or at least tolerated by the rest of our fluffy-butted protein generators.

After eating lunch in my office for the last week with my pants unbuttoned, I declared yesterday was “find the maternity clothes in the attic” day.  This is about the time I transitioned to the cozy clothes while pregnant with Jack.  After climbing in to the attic and retrieving everything, I quickly realized how freaking dark my taste was seven years ago.  I have one white shirt, and one pink shirt, and everything else is grey, black, or navy.  Snoozefest!  Many of my dresses that I wear to work are stretchy, and can work as maternity clothes, so thank the lord for some color.

Yesterday, we had one of the coolest parties ever at church.  Jack’s best friend since we started attending church again, is a 77 year old man who has MS and is in a wheelchair.  Jack invites him to his birthday every year, and they’re just total buds.  Well, he moved to an assisted living facility a few months ago, and hasn’t been able to come to church with his wife.  They were talking with his family and healthcare team to identity what is important in his life.  He said: family, faith, friends, church, fun, and food.  So, while his health is relatively stable these days, they decided why have a party after he passes when he can’t get to be around to enjoy it.  Saturday was in a way a “living memorial”, and an excuse to have a fun party with people he loved.  The fellowship hall was PACKED, and I would guess almost 150 people showed up to laugh, tell stories, share memories, sing his favorite songs, and eat a ton of food.  He is a die-hard Washington State Cougar fan, so everyone was requested to wear crimson and grey, even our UW graduate pastor (who looked pained to not be in purple and grey).  At one point, all 150 people were signing the WSU fight song and clapping, and the whole thing was just magic.  Whatever happens next with his health, I cannot imagine a better afternoon celebrating someone who means so much to so many people.  May we all be so lucky to impact so many. Amen.

Tuesday:: I have to work late, so the boys are making paninis and salad.

Wednesday:: Breakfast for dinner, then off to church for Trunk or Treating.

Saturday:: Homemade pizza and veggie sticks before we head out for trick or treating.

This week I spent $3.50 at the farm for raw milk, $13.67 at another local farm for 9 pounds of organic honey crisp apples (not certified because of cost, but all their practices are organic), $38.16 at the grocery store, $8.12 at the local butcher for ground pork for the meat balls, and $78 at Costco.