Yesterday was my 32nd birthday.

Last year, I spent the day making other people smile.

This year?  This year was alllllllllll about yours truly.

When I realized Troy would be gone for my birthday, my wheels started a turnin’.  My sister and brother-in-law took Jack Saturday afternoon for a sleepover with my nephew.  I went and got a massage using a giftcard that I received for my LAST birthday.

I came home and put the garden away for the fall.  I gleaned all the remaining tomatoes that might ripen in the next week or so, and pulled the pumpkins and cleaned up the vines.  Last year I planted three pumpkins and those three vines combined produced as much as the one vine this year.  I’ve said it before and I’ll say it again, this was a fabulous growing summer! 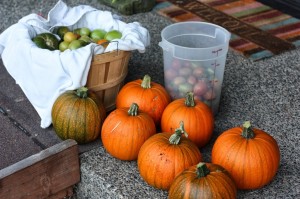 I also hacked the raspberries back about halfway to the ground.  We have ever-bearing raspberries, so as opposed to cutting down the canes that produced this year, all canes get a nice hair cut so that they will produce new growth next year.

After that, I took a shower and went and got Japanese takeout.  I brought it home and sat on my ass watching high-quality TV (Project Runway, Sons of Anarchy, Modern Family) alllllll night.  It was the freaking best!  I also enjoyed some homemade cheesecake that my lovely husband made for me before he left for work.

I was off on Friday, and went to IKEA with my sister-in-law and mother-in-law; we had the best time.  I got a new duvet for our bed and a bunch of other things I didn’t really need but did really want.  Including a bag of Swedish Fish that I porked out on Saturday night.  Also, while we were there, we were informed that it was National Cinnamon Bun Day.  We had to do our part.  We had to celebrate.

Monday:: Meatless Monday – fresh tomato soup and grilled cheese.  I made the soup on Friday, but this jar didn’t quite get full enough to can.

Tuesday::  Weeknight chicken parm, and green beans (the last linger ones from the garden).

Saturday:: Not sure yet.  Jack and I are spending the weekend at my mom’s while my dad is fishing, so we’ll see what strikes her fancy!

I haven’t gone grocery shopping yet, so I have no idea how much I’ll be spending.

What are you having this week?
originally posted on October 6, 2013; Updated on June 10, 2018
9 Comments//Leave a Comment »
Categories: Meal Plan
« Previous PostConfessions, October
Next Post » Underneath it All