Plus, I keep staying up late to can, which isn’t helping me getting quality sleep.  Last night I turned these “urban harvested” apples in to 8 quarts of a beautiful pink applesauce.  That will keep Jack occupied for all of a fortnight.  It always seems like so much work for just a few jars.

Yesterday Jack and I were scouting the neighborhood taking a leisurely walk and I noticed a pear tree in someone’s yard.  How I have missed this tree before is beyond me!  The tree is in the yard of a house that is for sale; no one lives there.  The only real way to access it is from the yard behind it.

I knocked on the door of the people behind the pear tree house, and asked permission to pick them.  The man (Billy) asked me my name since he didn’t want to give strangers permission to pick his neighbor’s fruit.  HA!  We agreed that I could come pick them next week.  I don’t know what kind of pear it is – which seems to happen all the time when you’re gleaning from random trees – but they’re red and gorgeous!

Jack and I also picked another 2ish pounds of blackberries.  I thought the season was over, but I’ve found that if bushes are in the shade for most of the day, they are still producing ripe berries.  It is the bushes that have so much sun (they’re the ones who produced so much earlier in August) that have the dried up berries on them.

Here is a lie that I tell myself each and every year.  “I’ll just buy this one more pack of canning jars, and then I’ll never need any more again”!  I’ve already used more jars this year than I had all of last year.  And I haven’t done the lion’s share of applesauce yet, not to mention I haven’t put up one single pear which hands down are our favorite canned items.  And I’m dreading October which is when I put up our tomatoes.  Last year I had 8 plants and canned a ton of tomato soup and diced tomatoes.  This year I have 14.

Jack and I ran a ton of errands yesterday (my kid is seriously the best shopper in the world.  Much better than his father), and our patience of hitting up multiple Goodwill stores was rewarded with this. 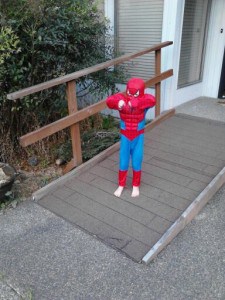 He’s been asking for a Spiderman costume for months.  Target has them for $20, and online has them for a little more.  This sucker set me back $7.  He has been wearing it non-stop since it came out of the washer and dryer.  Yes the dryer.  My little man could not wait for this thing to air dry, and honestly can you blame him?  We are currently debating whether or not this is church appropriate.  I’m sure you can guess my position in that conversation.

So, enough verbal diarrhea.  You are here for meal plan stuff, right?  Ok, here we go!

Tuesday:: Tomato soup (I found 2 more quarts that I canned last year while I was rearranging my Zombie Pantry), quesadillas, salad, and fruit.

Friday:: Mom’s favorite dinner of the week – popcorn, veggies, fruit, and cheese on the couch while watching a library movie.  This week’s selection will be Ratatouille.

Saturday:: Homemade chicken nuggets, some veg (whatever is ready to harvest in the garden), fruit, and pot stickers.  Yeah, I know that doesn’t mesh well, but I’ve been craving pot stickers.

Sunday:: Dinner at my parent’s.

This week was a stock up week for me.  Jack and I headed to fancy pants Central Market (a 45 minute haul for us, but always worth it.  They give out huge snickerdoodles to kids, hence Jack’s fantastic shopping cooperation.  They have the best bulk section, and I stocked up on spices that I’ve been using for canning (pickling spice, dill seed, and star anise) that were pennies compared to buying them in jars from any grocery store.  Central Market also has fantastic tortillas, and I bought 3 packages for the freezer.  $52 at Central Market.

$38 at Trader Joes for things like their salsa, juice (for water kefir.  Blackberry is our favorite flavor, and the juice comes from TJ’s.

We’re hitting up Costco after church and on the way to my parent’s.  I’m guessing it will probably be about $45.

What about you guys?  What are you dining on this week?