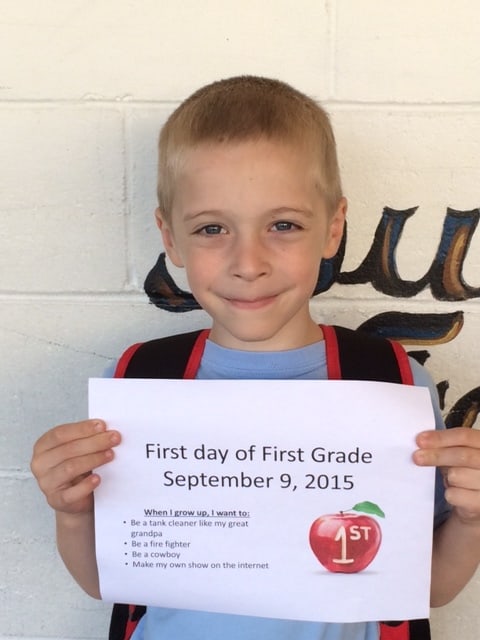 No one in our family has been a tank cleaner. We’re not quite sure where that is coming from…

We have officially survived our first week of first grade.  By this time last year, Jack had been on red at least twice (on the behavior chart).

Oh, what a difference a new teacher can make.

I received this email from his teacher Friday afternoon, responding to an inquiry I had sent her about the number of snacks I should be providing for him per day. 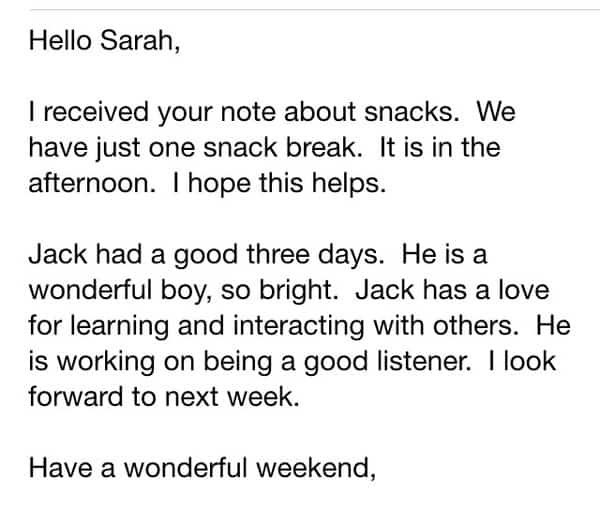 The “working on being a good listener” is such a positive spin on an area for improvement.  Feeling very blessed so far this year!

I had a midwife appointment this week, and I’m back up to my pre-pregnancy weight!  Which means I am crushing it in the nightly ice cream diet.  🙂  Speaking of ice cream, those of you who follow me on Facebook and Instagram have already seen this, but I made homemade fudge sauce last week!

Troy was at the store, and we had the following exchange: 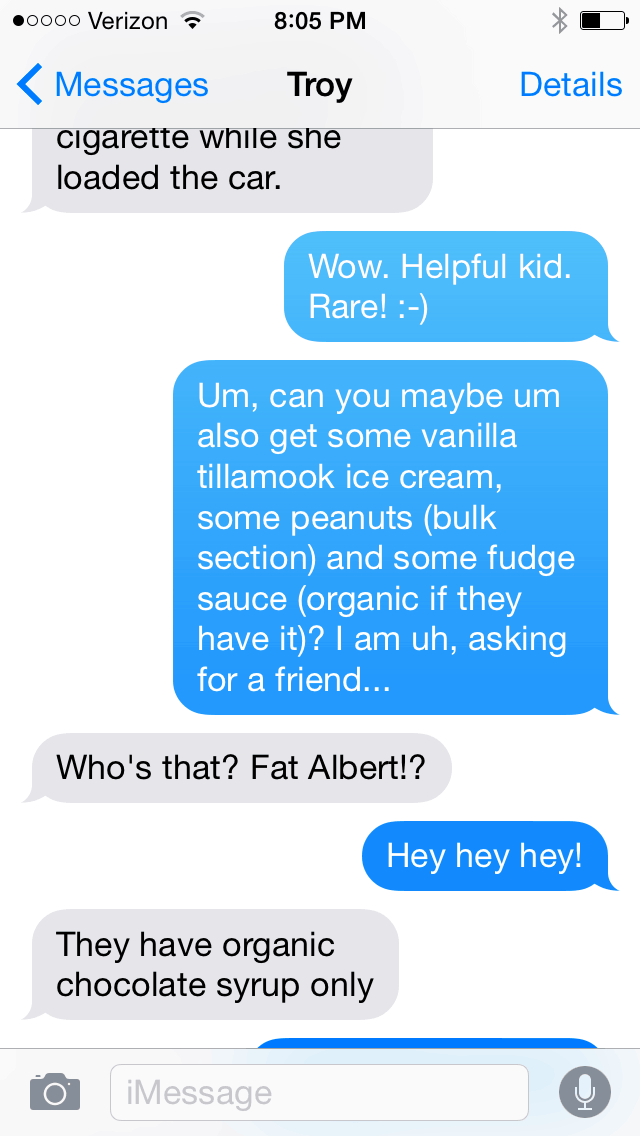 Sadly, there was no organic fudge sauce to be had.  There was organic chocolate sauce, but this girl didn’t want chocolate sauce.  Only FUDGE would do.

I had a recipe for fudge sauce in my homemade recipe book for years, and had never had a pressing reason to make it.  That ended last week. I used this recipe, but made a few slight tweaks based on what I had on hand.  I used a mix of semi-sweet and milk chocolate chips, half-and-half instead of heavy cream, and much less powdered sugar than it called for. 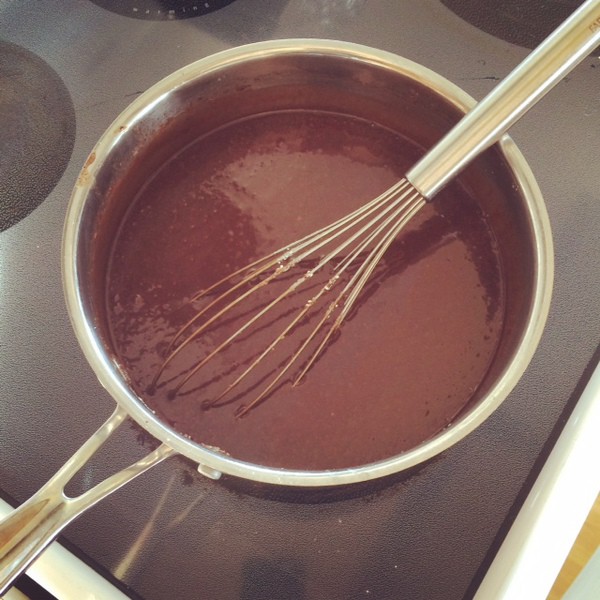 We had our 20 week ultrasound on Friday, and it looks like everything is healthy, and parts are where they should be.  He is measuring a few days ahead, but his head is about 1.5 weeks ahead.  Just like Jack.  This kiddo has short legs and big feet, so we’re finally convinced it is indeed Troy’s.  The ultrasound tech was very introverted and quiet, or else I would have asked her to measure his calves.

I’ve been working on a project since last weekend, and I think it is slowly coming to an end.  I’m painting a bedframe, and since it was bare wood, I’m going through the mind numbing process of priming it, then two coats of paint on each side of the panel.  Given my wonky schedule, there are days in-between some coats, so it is dragging on longer than I would like, but whatevs.  Once the bed is put together, Troy and I are cooking up a special project for it.

Oh ewwww, get your mind out of the gutters pervs.

I hope to be able to show you the finished masterpiece (?) in a few weeks.  I know I for one will be thrilled to have the project behind me.

FYI, if you’re offered a free upgrade to Windows 10; don’t take it!  I downloaded it about two weeks ago, and it’s TERRIBLE.  Typing takes about 40 times longer, because the cursor jumps all over the page like a humming-bird on meth.  I tried everything to decrease the sensitivity on it, but I finally just gave up and reinstalled the old version of Windows.  Life is better now.

Not sure if you remember me talking about Jack and his giant feet?  Well, here is photographic proof. 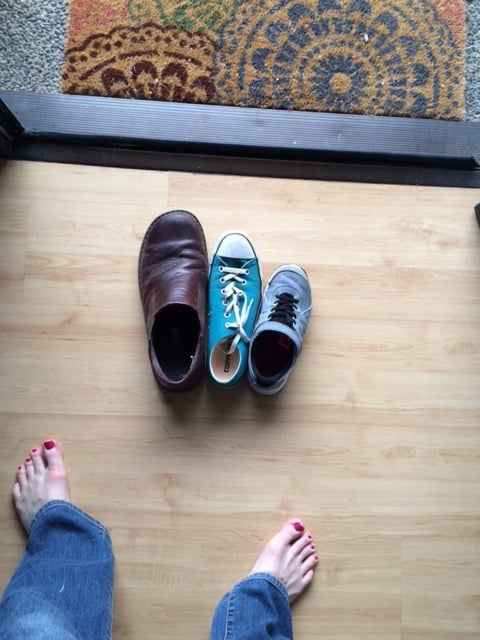 Mom, Jack, and I took a walk last night and I had to take a step back and capture the moment because it did something powerful to my heart. 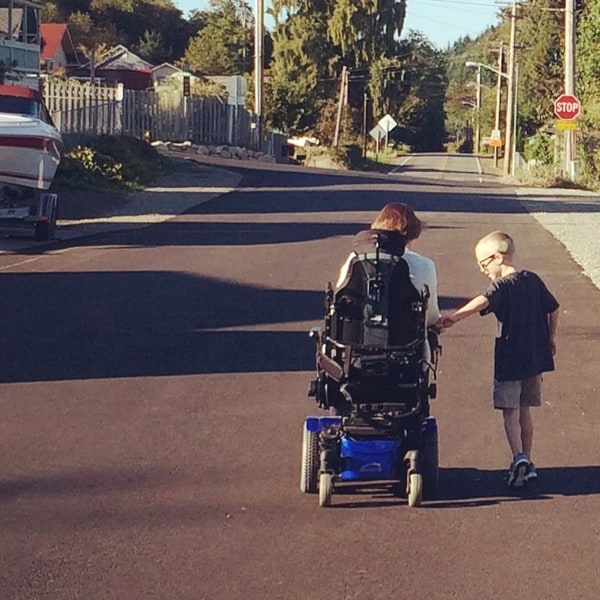 Meal plan time!  I’m working late this whole week, and Troy is taking a class for work Monday through Friday, so that means five days of daycare pick up and drop off by me (Troy usually is able to take him to school or pick him up a few times during the week), and a whole week of make ahead meals.

A quick note about “drinkable salads” below.  I haven’t thrown up in a few weeks, but I still cannot stomach most veggies for some reason.  The top of my hit list is anything salad related (spinach, kale, lettuce), zucchini, and cucumbers (but homemade pickles are fine for some reason).  I think the zukes and cukes are too similar with the seeds and I um, had a bad night with them around week 15.

So it is a real challenge for me these days to consume most veggies, especially at dinner.  I’m sick of putting salad on the menu, putting it on my plate, taking one bite, and dry heaving.  Last Thursday, it was hot and I knew I needed some veg.  I decided that smoothies with double the spinach in them would be “salad enough”.  I’m apparently three; I’ll consume veg if I can’t see it.  It was a huge hit, and Jack sidled up to my mom and said “Grandma, are you going to finish your smoothie”?  Voila, drinkable salads were created.

Monday:: Reubens (with slaw instead of sauerkraut), drinkable salad.

Tuesday:: Pizza (homemade from the freezer), and regular salad (I won’t be home, so it can be eaten outside of my presence).

Thursday:: Breakfast burritos, this hashbrown potato thing that has been in my family for a few years.  There is no real recipe, but you mix shredded potato with sour cream, salt, pepper, paprika (smoked, obvs), diced green onions, and bacon (which I usually leave out if serving with something that already contains meat), and top with a little cheddar.  Then you bake it and it’s good for a few days in the fridge.

Friday:: My nephew is spending the night, and we’re having popcorn and movie night.