September is such a tricky month.  The leaves start to change, the spiders come out (:shudders:), and I start using the covers again at night.

Then, we get 90 degree weather for two days and I’m sweating my balls off (right off apparently!) all over again. 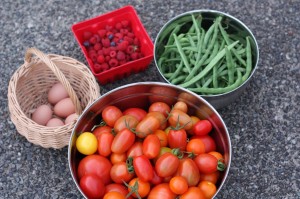 And then in February I’d be begging them to just eat us because we’d be so hungry.

This week, The Homegrown Collective sent me their latest box, and it is all super foods (like chocolate!) and detoxifying.  There are so many yummy things in this box that I practically licked it when I picked it up at the post office.  It included tea, chocolate (CHOCOLATE!), a fresh pomegranate (yum), finishing salts, epsom salts, a sprouting kit, and other awesome things for getting your cleanse on. 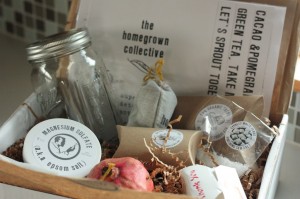 I canned five pints of Marinara from the book Food in Jars (thanks mom for the Christmas present!), and continued to pick lots of fall raspberries each night.  My child is a berry monster, and I’ve even managed to freeze an entire gallon of them.  I’ll turn them in to jam later in the fall when the idea of standing over a hot boiling pot of water isn’t so frightful.  And perhaps some raspberry pancake syrup?  I’ve only ever done blackberry, but I’m thinking raspberry might be on the agenda for this year.

Thursday:: it is my mother-in-law’s birthday, and we’re heading over to their house for din din.