Ok, ok, last mention about this in a post for at least a month, but ahem: 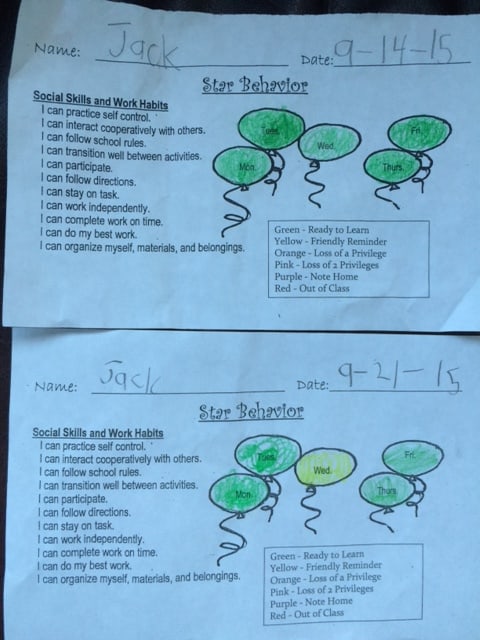 Jack told me that yellow looking “Wed” is actually “light green” and not a yellow.

I wish I knew how to do backflips, so that I could take a video of myself doing it.  And then post the video.  Because back flips are awesome.  And so is first grade.

Anyone have a “thing” in their house that makes them cringe to clean?  Something that is so heinous you often just let it go because you know you can never really get it clean?  For us, that is our master shower.  I don’t have any photos of it, because it is so shameful and horrid.  It is a basic shower with beveled glass doors that no force on earth can clean.  We don’t have hard water, but the doors were always so crusty.  We’ve removed the doors before, taken them outside and scrubbed them down with every kind of cleaner ever made.  We scraped the caulk off and recaulked around the doors because within 45.2 seconds of cleaning, it would be covered in mold.  The tracks that held the doors were my constant enemy, and I spent hours with a skinny grout brush, tooth brushes, and Mr. Clean Magic Erasers just trying to get the grime out of there.

It was a losing battle.

I couldn’t get even.

Finally, I stopped trying to win the battle and get even.  And I won the freaking war.

Troy removed the doors and the tracks last week.  He plugged the screw holds (from the metal frame) with these cool little plastic things. 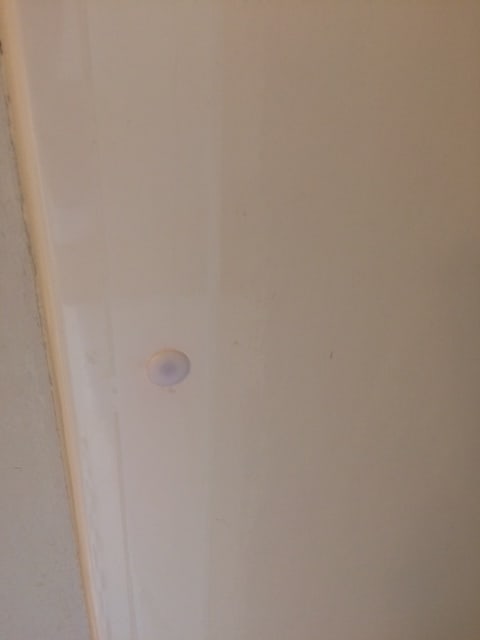 And then hung a curved shower bar, which is amazing.  And because we are trying to keep it light in there (it’s a little shower and the glass let in lots of light), we’re sticking with just a basic white curtain for now. 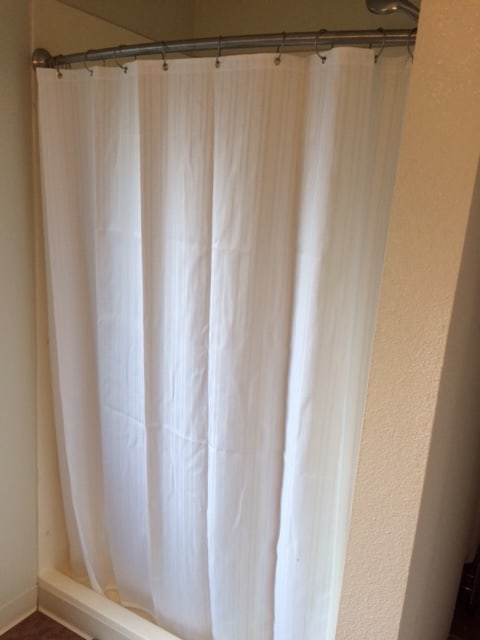 I feel so free.  I can get in the shower now and not feel tied to the constant scrubbing.  We’ll still of course actually clean it, but it will no longer be an exercise in futility.  We still need to put up hooks for towels (old doors had a towel bar, and then we just usually put my towel up and over the frame).  The walls by the shower are very small, so we’re just going to hope for the best in terms of drying conditions.

A quick note about the tiny little “lip” of the shower floor.  So far, so good in terms of no water coming out of it.  The first shower curtain we got was only temporary, and was very light weight, and spent the duration of the shower attacking our legs like rabid bunnies…but still no water ended up outside the shower.  We replaced it with a white heavy duty fabric one, which is better, but still has a little bit of “leg” creep. We’re probably just going to weight it with some heavy duty magnets we have.

We were incredibly lucky this year to be gifted tons of free apples.  I’d venture to guess about 60-75 pounds of them.  Someone I work with has 30 trees (30!!!!!) and gave me a few boxes. My sister’s in-laws moved to a new house with a nice handful of trees, and they were kind enough to give me some as well.  All of the free apples were a bit tart, so I stopped by my favorite small family apple farm yesterday and picked up about $22 worth of really sweet saucing apples.  I mixed them in with the freebies, and the resulting brew wasn’t too shabby.  It wasn’t the “oh my gosh this is like candy” sauce that I usually make, but Jack loved it and that is all that matters. 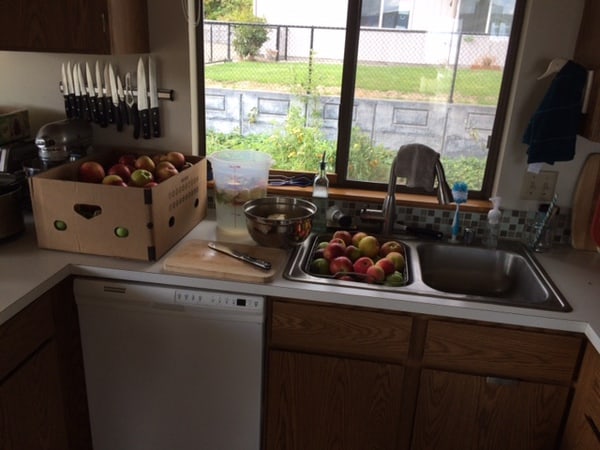 Speaking of Jack, he and Troy were big helpers when it came time to make the squish.  I usually make applesauce on weekends after Jack is in bed, and end up staying up until 1 or 2 am to get it all done.  The boys were in charge of all the squishing (“Mom, look I can make the apples poop”), and I did the cutting, cooking, and canning.  Their help was invaluable, and easily cut down the process by about two hours.  Which is lovely, cause by the end of it, my dogs were a’barkin (my feet were sore). 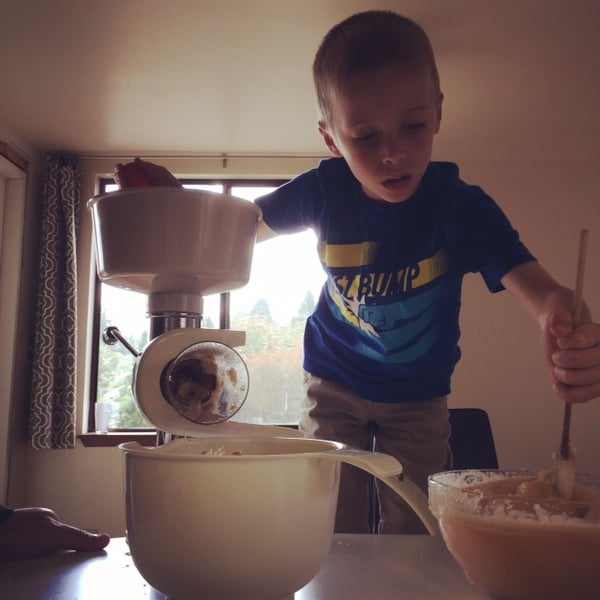 Yes, he looks like a giant in my tiny kitchen, but actually I was on the floor taking this photo so the perspective is wonky as hell. We have these horrible dark fake oak upper cabinets in the middle of the kitchen that suck all of the light out of the room and were right in the line of the photo, so I squatted.

We ended up with 16 quarts using about half of the apples.  I’m hoping they’ll be as willing to help next weekend too…

Meal plan time!  I feel like this week is such a quintessential “American” menu plan.  But some weeks it comes easily, and some weeks you spend 45 minutes surfing websites just trying to find one more meal.  On a Friday night.  When you’re watching Scandal on Hulu and realize you’re really sick of other people’s drama, and constant desire to wear white fancy coats.

This week I spent $15 at the local farm for raw honey (went up $4!), $21.86 at a different local farm for apples.  It was fun to see the couple who run it.  I may have bought a lot of apples last year, cause when I walked up they’re like “soooooo good to see you again.  How have you been”?  I’m fairly certain I made between 80-100 quarts of applesauce last year, so yeah…

I spent $75.12 at Costco, but only $56.13 was for groceries.  Troy wanted some Kirkland white shirts.  Anyone out there have a dude in their life who lives in plain white cotton t-shirts?  Troy insists that Costco’s are the best. And $30.86 at the grocery store, though $15.84 of that was for a coworker.  My grocery store sells her husband’s favorite kind of cheese at the deli, and she lives an hour away.  I pick some up for her on occasion, and she returns the favor by bringing me specialty favorites from a fancy grocery store near her.

originally posted on September 27, 2015; Updated on June 11, 2018
13 Comments//Leave a Comment »
Categories: Meal Plan, Scattered Sundays
« Previous PostMeet the Youngling
Next Post » The Damn Pound Cake. On Why You Can’t Win Them All