The rain came back this weekend.

I can’t really complain because this summer was A-MAZING.

Other than getting a pedicure with my sister (so fun) and grocery shopping, we spent the day hunkered down in front of the fire place playing and just chilling in general.  I can’t remember the last Saturday that didn’t have us running around like crazies.  It was nice. 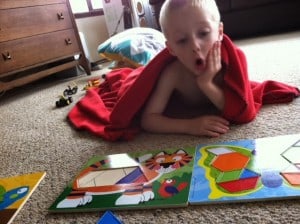 It was also really wet, and really cold.  It was not a fun day to be a chicken.  I let them out of the coop, and they looked at me like I was shit ass crazy.

When I was inside doing puzzles with Jack, I heard quite a commotion from the chicken yard.  I ran out to find them huddled in a clump against the far side of the coop, because “Girl Girl” (named by Jack) the neighborhood peacock was trying to eat their food.  Peacocks are pretty mean, and she was screaming at them and they were pretty much crapping their pants.  Well…feathers.

I chased her off with Jack’s toy rake, and then I prayed that they weren’t too scared to lay me some eggs.  I was concerned, but practical.

This week also found Troy with not one, but two man colds.  Lawd have mercy I have zero patience for infected vaginas man colds.  A few weeks ago I had made some elderberry syrup based on this recipe, and have been shoving it down Troy and Jack’s throat on a the daily.  Troy has said that once he feels the cold coming on, he takes it more often and it actually does work to reduce the duration of said man cold.  Jack had what seemed like a cold coming on earlier in the week, but it never really took hold and was gone within 24 hours.  We’re official converts to the elderberry syrup church!  I purchased the dried ginger from Azure Standard, and the dried elderberries from Amazon.  Everything else I had on hand.

Monday:: I’m trying this garlic chicken recipe, Lazy Lady Skillet potatoes, and green beans from the garden.  For the garlic chicken, I’m going to make DIY Italian dressing and add a crapton of garlic to it.  I’ll use that to dredge the chicken instead of plain olive oil.

Saturday:: It’s my birthday, and I have a special meal planned.  I’ll tell you more about it next week!

This week I spent $3.50 for raw milk from the farm and $16 at the grocery store.  I have a full freezer, full cupboards, and a full pantry.