Early October is usually busy around this micro farm.  As long as we’ve been in this house, we’ve have terrible weather in June which delays everything from growing in a timely manner.  As such, the tomatoes don’t start ripening in mass until early October.  I always seem to spend my birthday canning tomato soup.  Except for last year!

This year we’ve had an AMAZING summer, and the weather has been fabulous.  I do believe that September now might be my favorite month. 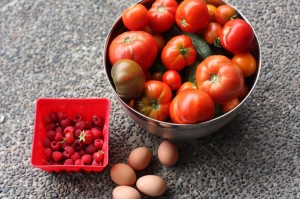 This is what I have for lunch almost every day, along with a hunk of bread.  YUM.  I wait all year for this. 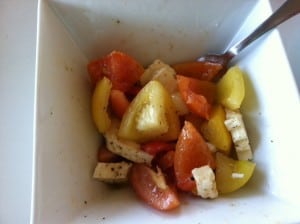 Last night, I sold a dozen eggs to our neighbor.  It was only for the cost of the feed, i.e., I didn’t make a cent from it, but it was still pretty cool to think someone wanted to buy something that “we” (as in the chickens) produced.

Saturday Troy was around all day (shocker of all shocks), so I got to run errands by myself.  I dropped off the bread at church for communion, hit up the fabric store, the fruit stand, the grocery store, the farm, and Goodwill.  Goodwill was a boon, and I found two mason jar drinking glasses to add to our collection.  I fell in love with these things recently, but they’re SO expensive to buy new.  I’ve found them (usually) one at a time at various thrift stores, and we even have two tiny ones for Jack.  I don’t even know if we have regular glasses anymore, because we all fight for these ones.

We also finally moved the new TV cabinet from the garage up to the livingroom.  Old Man Bitch Back (Troy) hurt his shoulder right after we got this thing, so it’s been languishing in the basement.  The new cabinet actually set off a three room remodel (post and photos this week) that took ALL day.  Poor Jack was basically ignored all day and told to go find something to do.

This week I purchased two LunchBots from Amazon for our family.  They’re pretty cool, and I think they will be great for lunches out and about.  I really wanted them because they’re stainless steel, and are good for portion control.  I’ve drawn a line and think Troy needs to exercise some portion control Troy has made the intelligent decision to exercise portion control.  These will be helpful in that endeavor.  The cost was a bit much, but thankfully I did have some Amazon giftcards that I earned via Swagbucks, so that price wasn’t as hard to swallow.

Tuesday:: Enchiladas (I use the Pioneer Woman’s recipe), rice from the freezer, and black beans from the freezer. Or possibly a chicken tinga recipe I found.  Ok, here is what I’ll do…I’m make the enchiladas tonight to freeze, and then I’ll make the tinga for Tuesday.  Go team!

Wednesday:: I have to work late, so freezer pizza it is.

Saturday:: I have absolutely no idea.  Let’s see what tickles my fancy over the week, shall we?

This week I spent $4 at the fruit stand for a giant watermelon, $3.50 at the farm for raw milk, and $55 at the grocery store.  Sheesh, that grocery number seems high to me, especially compared to previous weeks.  I think it was all the stuff for the enchiladas.

One comment on “Meal plan for September 9th – 15th”