As much as I decry the society of the selfie (I honestly don’t care what you look like while you’re seated in your car), I have to say, Jack’s selfie style might change my mind.  This is what happens when you turn your back on your phone while manning the waffle iron. 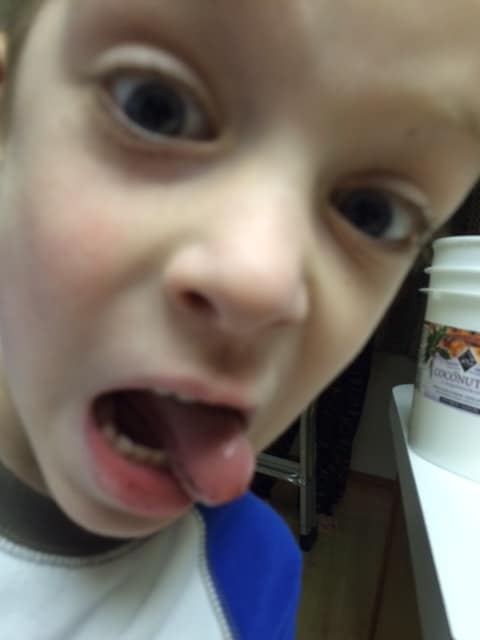 In case you’re interested, the giant gallon of coconut oil in the background was for my Whole Wheat Coconut Oil Waffles recipe.  Do yourself a favor: make a double batch and freeze them for a wicked quick work/school day breakfast.  The whole grain goodness will keep you full until lunch.  Slather some almond butter on there, and you won’t even have room for lunch.

At afternoon pick up on Friday, Jack’s teacher told Troy that she was nominating Jack for the school’s gifted program.  I was under the impression it wasn’t open to kids until third grade at least, but I appear to be mistaken.  We don’t have any details yet, as they’ll be forthcoming from the school in the next few weeks.  She said his reading is “off the charts” and his writing is “really taking off”.  Apparently the class was discussing a book about some animal that was singing and the teacher asked the class how the animal was feeling.  Most of the kids said he looked happy, another child said he was smiling, and his teacher said Jack piped up with “he looks ecstatic”.

Yesterday, we signed Jack up for t-ball for spring.  We wanted to do it last year, but I think he just wasn’t ready socially.  And he said he didn’t want to do any activities. I think it’s great to make sure kids are involved in something at some level at some point, but forcing a (then) four-year old to play a sport seems beetle headed. He has matured so much in the last few months, and I think he can finally manage it without getting himself choked out by the coach.  We shall see.

Troy was off a few days this week and started painting our new room.  I went to the hardware store and asked for their most popular white for the ceiling, and the lady appeared to be new and said “we have a lot of whites”.  I have zero patience for picking out colors, so I stretched my imagination and chose one called “ceiling white”.  Seemed like a no brainer to me. 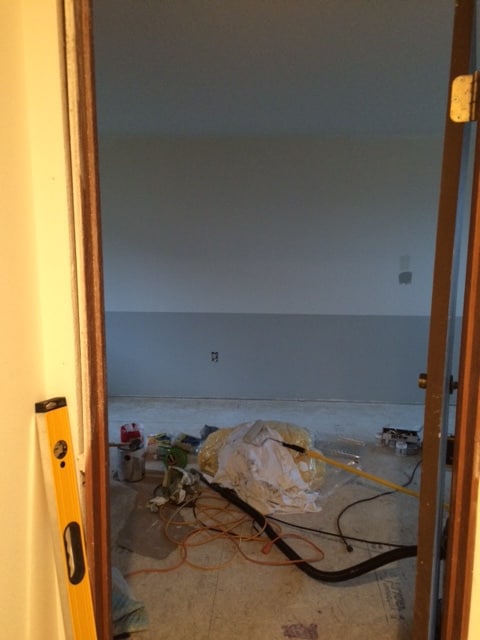 That giant lump in the middle of the photo above is our enormous winter comforter that is smashed down in one of those giant Space Bags things.  Let me tell you, they work.

We’re doing a chair rail in our master, and Troy did a great job taping everything off. I wouldn’t have the patience for it; half the wall would be level and the other half would have “oh fuck it, chair rails are dumb” spelled out in grey paint.  We don’t have lights in that room yet, so painting is limited to daylight hours only.  Even without the bulbs in the ceiling, the color is looking very pretty.  It’s a lovely grey blue that looks very warm.  He still needs to paint the upper part of the wall (a whiteish grey), and then install the chair rail.  Again, not a job for me.

Troy was looking at the room tonight and said “I like it, but I just want to make sure it’s not too grey in here”.  My response was “you know how to fix that?  Let’s not install the grey carpet and do wood floors in here”.  I think based on his huffing and slight stomping out of the room, I hit his official limit for how much hating on carpet he can take.

Did I mention how much I HATE carpet, and how much I want nothing to do with it in the bedrooms?  I have so many plans for the bedrooms (Jack’s needs a total redo/updating), and none of them include stupid icky nasty carpet.  Pfft!!!

This week in remodel news, some company came and blew insulation in to our attic.  Our living room is always the coldest room in the house in winter, and the hottest in the summer.  Once the insulation went it, Troy and I looked at each other and both said “I’m hot” with the heat set to our normal temp of 67.  The head contractor said our attic was about R-16 before, and is now at R-42.  Ahhhh, such a nice change to be extra insulated.  If we had one billion dollars, it would be nice to replace all our giant old windows.  It’s on the “if we win the lottery” list (along with remodel our 1970’s kitchen).

Ready for our meal plan?  I sure hope so, cause I’m ready to share it with you!  Just a reminder that I only plan our dinners for the week.  For breakfast we tend to eat the same things (homemade Greek yogurt for me, a sandwich for Troy, and whatever Jack’s heart happens to desire that morning), and lunches for the grown ups are leftovers of what we had for dinner the night before.

Monday:: I’m working late, so Troy and Jack are going to make grilled sandwiches, salad and grilled veg (ha ha, like that is going to happen), and fruit.

Wednesday:: I’m working late again (:confetti:), so the boys are making pizza, salad (that ain’t happening.  We all know it), and fruit.

Thursday:: Chicken teriyaki bowls, lumpia from the freezer, and fruit.

Friday:: Best night of the week – popcorn and movie night!

This week I spent a whopping $63.34 at the grocery store, $3.50 at the local farm for raw milk, and an unknown amount at Costco because I lost my receipt.  I know the total was $122ish (gulp), but that included $30 for razors, $16 for toilet paper, and I think something else non-edible.  My cart was about 80% fruits and veg, so that felt pretty balanced to me.  Their frozen organic fruit has found a new fan in this girl.  Jack eats the frozen blueberries by the bowlful, and I am packing away a bag of their cherries in two weeks.  I put them in my mason jar and top with homemade Greek yogurt, and by the time I get to work, the cherries have melted and the yogurt is still cold.  It tastes like probiotic sunshine.

What are you having for dinner this week?
Do you think Troy should let me have my way and agree to wood floors in the bedrooms?  If you don’t, feel free to keep your comments to yourself.  🙂