Rice cookers work better if you put the lid on.

Right now I am surrounded by sick boys.  I seriously need some other tough lady genes in this house.  Maybe I should bring the chickens inside just to incorporate some “get over it” estrogen pumping.  Jack has the sniffles and Troy has had a temp ranging from 101-103.5 for the last two days.  With Jack feeding off of Troy’s flu, he is trying to convince me that his sniffles are the flu.  While I try to convince him to sack the hell up and take it like a girl.  Tis a losing battle I fight.

Yesterday my sister and nephew joined Jack and I for a trip to see my 90-year-old grandma.  Side note: Jack currently has THREE 90-year-old great-grandmas in his life.  Is this little dude lucky or what?!  The boys were really good despite having to be in the car for 90 minutes, and then forced to be quiet and not crazy at “great-grandma’s hotel”.  Jack had decided he too would like to live in a retirement community, until I told him they didn’t allow Nerf guns.  Whump whump.

While washing my hands in my grandma’s kitchen, I saw a little thing (what is the official name of a cross-stitch project?  They can’t all be “samplers” can they?) above her sink.  I think I know where I get it. 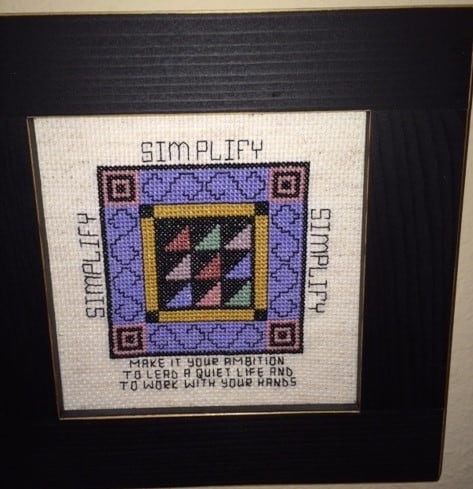 For those of you who can’t read it, the sampler (?) says: “Simply.  Make it your ambition to lead a quiet life and to work with your hands”.  From my grandma’s hands to your eyes, some very wise words for us all.

I mentioned that I got a Jawbone Up for Christmas, and holy smokes I am loving it!  It has totally changed how I spend my work time, and has inspired a forthcoming post about incorporating exercise in to your life even with a desk job (there was a 6 month period where I could literally hear my ass growing.  Literally.  Literally).  This is from last Wednesday.  The idle time was some craptastic traffic I sat in on the way home.

Crushing it!  Loving my Jawbone! That 2.1k calorie burn kind of makes me want a milkshake.  It brings all the boys to the yard.  Any better and I’d have to charge.

Last night officially ended Troy and my run of watching all the Harry Potter movies.  I started “reading” (audiobooks) Harry Potter last summer during my commute.  Back then Jack was commuting with me, so I had a whopping 10 minutes a day to work my way through the Hogwarts adventures.  Combine that with long wait times to download the audiobooks for free from my library, and it added up to seven months to get through all the books.  After I finished “reading” each one, we’d reserve the movie from the library and watch it.  Well, Troy would watch it and I’d just grumble and say “that wasn’t in the book” and text my friend Anne who is a giant Potterhead and we’d bash the script writers together.  Anne’s standing response was “there is so much good stuff in the book, why did they have to make stuff up”?  I must say I concur.

Anyone else thing Voldermort is kinda hot?

And just because I’m cleaning up my photo albums, here is a photo of Jack’s first time at the hookah bar.  I think that visit we got him breastmilk flavored tobacco.  He took it like a champ. 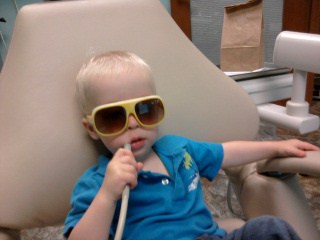 Wait, actually I think that is when we dressed him like Hunter S. Thompson for Halloween.

Wait…nope, that’s not right.  Just his first time at the dentist.

Monday:: Taquitos, salad, and fruit.  Yes we were supposed to have that last Saturday.  No, that didn’t actually happen.

Tuesday:: I have a big ole ham in the freezer, so we’ll have some of that, roasted root veggies (cut up and seasoned like this recipe), served with Whole Wheat Red Lobster knock off biscuits.

Wednesday:: Ham, my MIL’s cabbage thing (minus the bacon), salad, and fruit.

Friday:: Popcorn night.  Best night of the week for sure.

I haven’t spent any money on groceries this week because I’m not going shopping until tomorrow.  I know I need raw milk from the farm, some veggies, baking spuds, some spices, and a new yogurt to use as a starter for my homemade yogurt.  After about eight(ish) batches, it gets too tart to keep reusing the homemade stuff to start the new batch.