I feel like there is something in the ether that many people have weighing heavy on their minds, but no one is willing to discuss it.  We are a society of people who just let things eat away at us, because we’re all too afraid of discussing hot topics.

How in the world do you all wear those super cute athletic leggings that I see everywhere, without giving off massive camel toe?

I snagged a pair that I thought would be nice for walking (I’m not a yoga pants during the day kinda girl), but because Bennett was with me, I couldn’t try them on at the store.  I got them home, and before I even had them pulled up all the way, I started laughing because, NO.  It was like wearing a giant sign with a blinking arrow pointing at my crotch shouting “vagina here”.  So, friends, what sort of magical underwear are you wearing to prevent a massive moose knuckle?

We had Bennett’s baptism last Sunday, and it was pretty dang lovely if you ask me.  My bestie Anne and her family flew in from Colorado, and my other bestie Megan and her family came from over an hour away, with four kids (one being a newborn), and were on time for probably the first time since I met her in 2002.  I can only imagine the amazing feat that enabled that to happen.  If you follow me on Facebook, you’ll know that about a week before the baptism, I decided to hack up my wedding dress to make Bennett a baptism outfit.  I’ve never sewn clothes before (other than a few Jedi robes), so what could possible go wrong?

There was a lot of swearing, some super stupid mistakes (I had to cut the two pieces for the front FIVE times), and there were loads of errors (near holes in the armpit), but I did it, I worked super hard, and I was really proud of it!  To add a bit of color, I did a decorate stitch in blue thread around the collar.  I’m not very good with the decorative stitching, so the spacing was off, but Bennett is so wiggly, no one noticed. 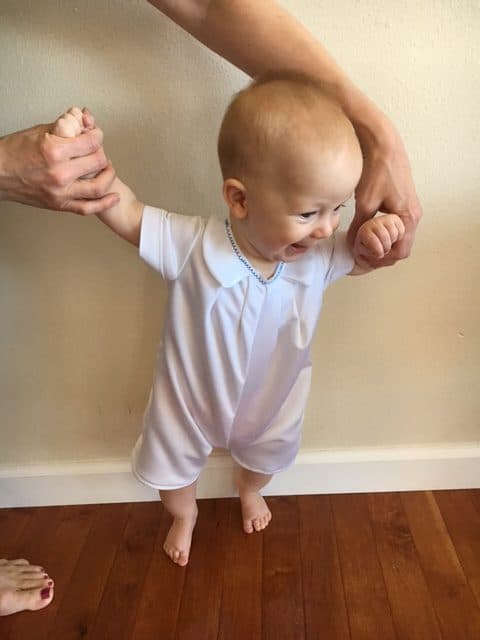 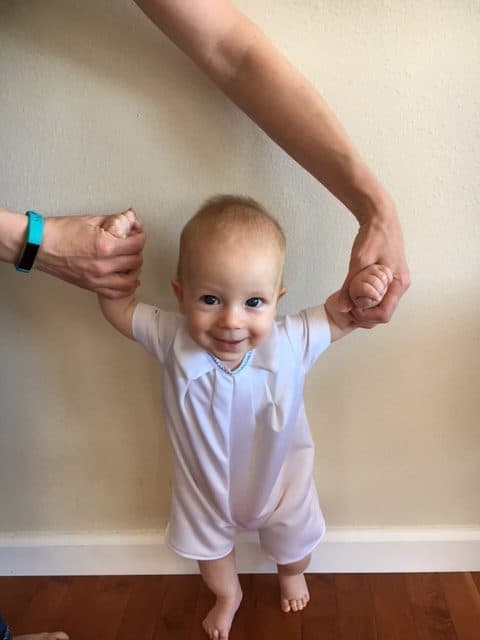 The baptism went extremely well, and B only cried the tiniest bit until his favorite person in the world (Jack) wiped his head with the handkerchief.  While we were all standing up there, B was in my arms, and spent about a minute alternating between patting, and slapping Jack on the head. I was giggling for about 50% of the ceremony. 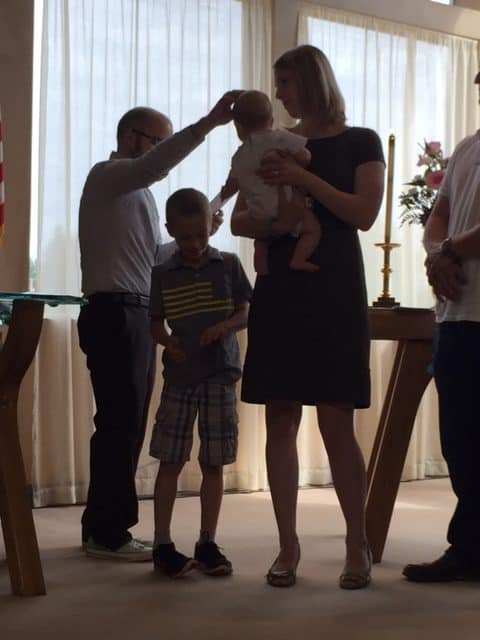 Troy was there too; just no great photos with him in there (our church is notoriously bad for lighting).

While Anne was here, we did a day in Seattle with everyone.  We went to Pikes Place, rode the monorail and the ferry, and saw The Art of the Brick at the Pacific Science Center.  It’s an art exhibit where everything is made from Legos.  It was so amazing!  The pieces were terribly staged for taking photos, and I wish I could have shared the experience with you all live.  It was unbelievable! 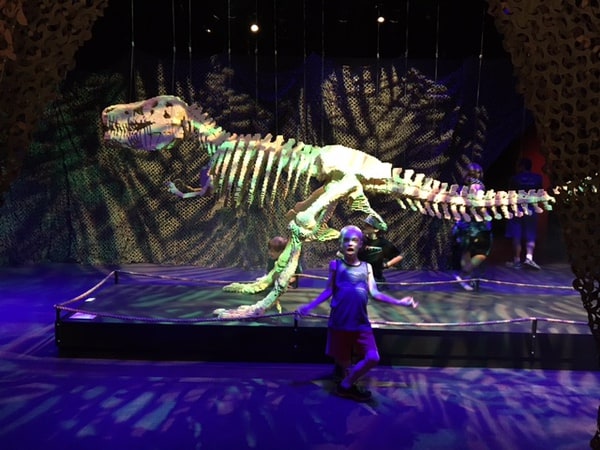 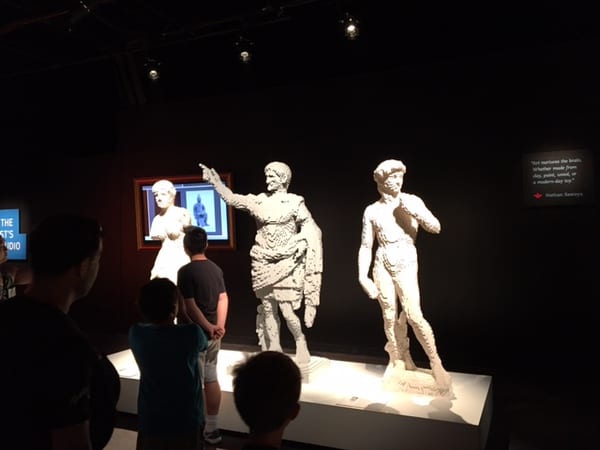 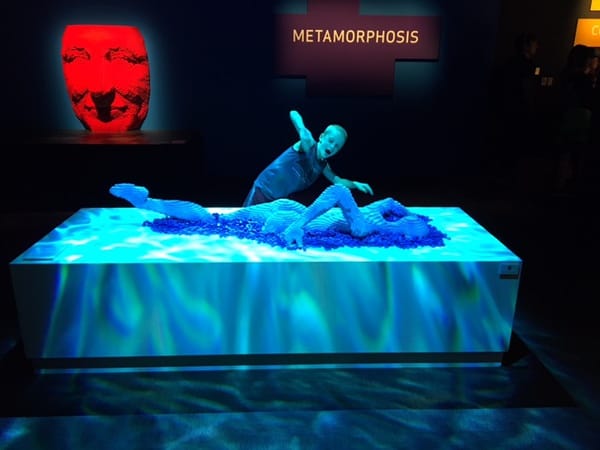 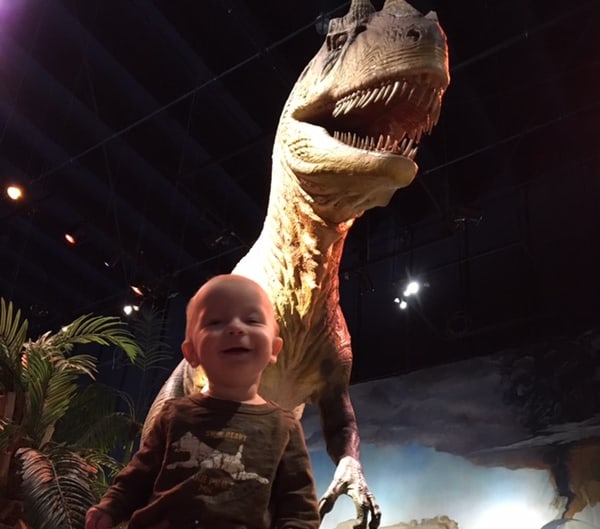 Not Legos. Just a photo that makes me laugh 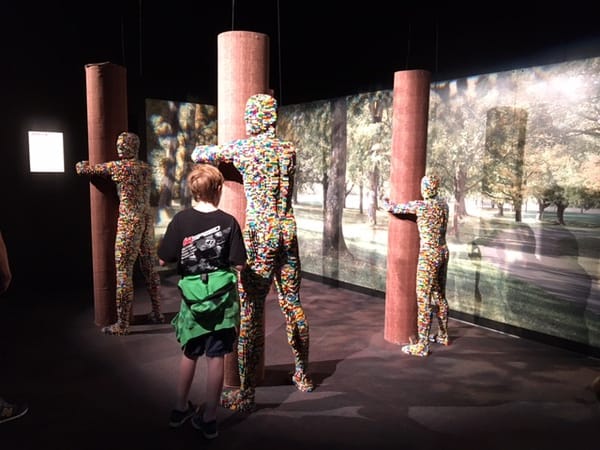 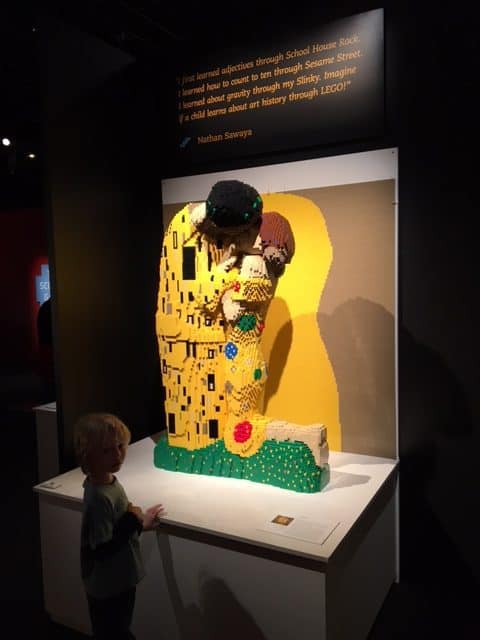 After everyone left town (sigh), we spent all last week getting ready for a garage sale this weekend.  If we averaged out how much time we spent on it, compared with how much we made, the return on investment was very low.  We pulled in $220 over two days, but holy crap, is our garage sparkly clean.  We thought we didn’t have a TON of stuff to sell, but we ended up having a decent amount, and my sister and our friends also joined us.

Jack and my nephew sold lemonade as well as their own toys.  I have to say it was the easiest bedroom clean out I’ve ever had with Jack. I told him he could keep whatever money was made from the sale of his toys.  He wanted to sell everything he owned, because he is very financially motivated these days.  People were so kind with buying lemonade, and many people tipped him and my nephew, and even allowed them to keep their change in many cases.  The boys learned a lot about customer service, and Jack learned about what it means to have a staff.  It was his lemonade stand, but my nephew helped, so I made Jack pay him a commission at the end of each day.  Between toys and lemonade, Jack pulled in $56 before expenses. 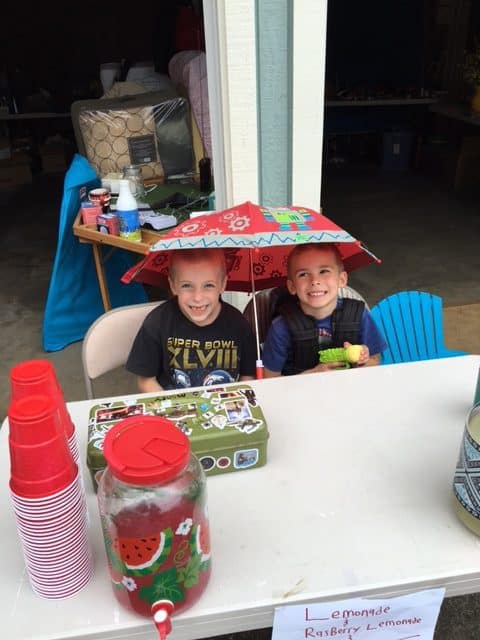 A few goals of the garage clean out was to remove some shelves that run horizontal to my car on my side of the garage.  They were installed years before we moved in, and are quite wide.  Getting in and out of the car on the driver’s side was a bit of a tight squeeze.  Not only did we clear off everything on those shelves, but we organized and downsized so much on the other shelving section we have.  We were able to create a little “parking spot” for our stroller, and get it out of the way.  Our friend who was with us at the sale said it was the cleanest garage she had seen other than people who had moved out. 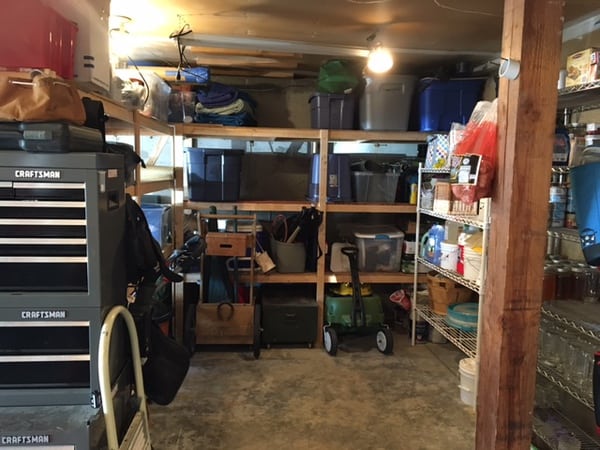 While getting ready for the sale, I came across this gem.  What is his secret???  That he swims with his clothes on? 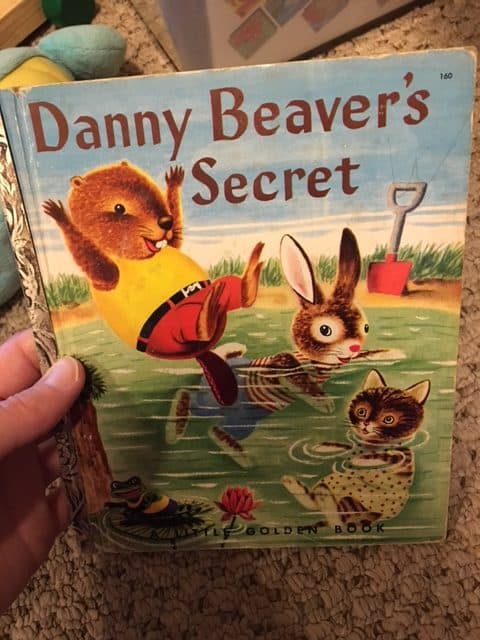 As to our “riches”, we’ll be using some of it for a rental car for an upcoming trip, and some for a new project that was inspired by the clean up. Stay tuned!

Meal plan time!  This week it’s going to be hotter than two rats humping in a tube sock, so we’re going with a meal plan that requires zero use of the oven.  Thankfully, my garden is doing well and we have some great produce options at our finger tips.  I’m excited to see what the garden looks like when the “heat wave” (a Seattle heat wave is laughable to the rest of the country) breaks.

Thursday:: A new pasta dish I am going to try out.  I created it in my mind, and we’ll see how it plays out.  Green beans on the side.

Saturday:: Clean out the fridge, or we’ll go out.  There is about 15% of me that just wants to have ice cream for dinner.  I did that once about two years ago, and Jack still talks about it.  It’s not lazy parenting; it’s creating memories.