You know when you’re growing up and you have dreams about what your life is going to look like when you’re older, and what you are going to be?  And then of course those plans evolve over time and you make new dreams. I have something in my life that I am aiming for, and I just don’t think I’m going to be able to obtain it, no matter how much I would want it.

I really wish I could be one of those people who looks cute in those exercise skirts.

I know, lofty goal, right? It’s hard to fathom trying to achieve such a thing, but I will keep trying.

If you’re not following me on Facebook, you missed some amazing life hacks this week!  Such as Troy and his cupcake frosting invention of making a cupcake sandwich to prevent frosting from getting all over his face. 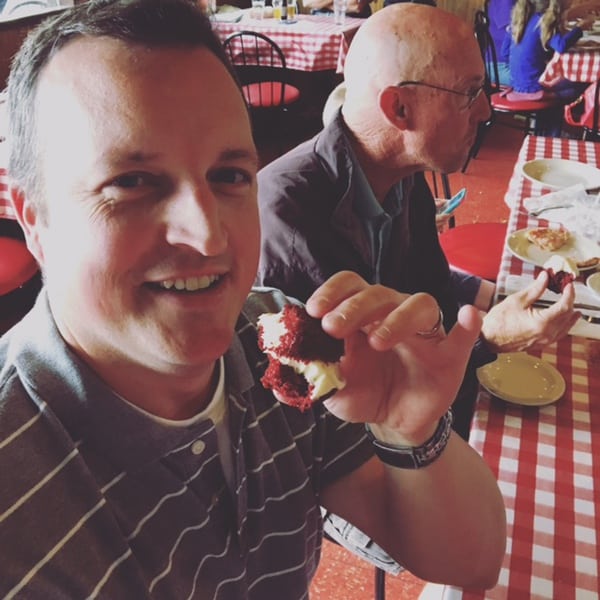 Or the fact that homemade Pop Tarts are a thing!  These bad boys were made in honor of Troy’s birthday on Thursday.  I had made them once before when Jack was really young.  Take it from me, making the dough the night before and then rolling, filling, and baking the day of, is much much easier. 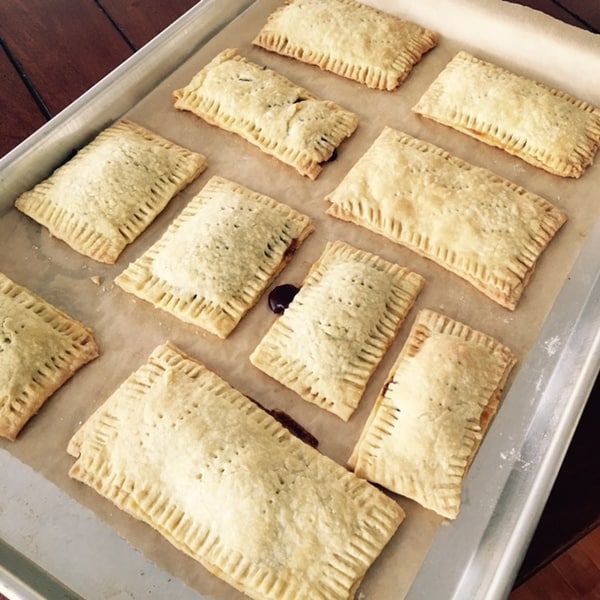 We finished up baseball this week, which is always bittersweet.  It’s lovely to get two to three days of your week back, but Jack has such a great time and loves it so.  I won’t be sad to see those treat tickets go though.  Last year for T-ball, the parents all agreed to take turns and bring group snack each week, and most of the time everyone did well providing healthy fare.  His team this year never even discussed the option, so we had to shell out $15 so that after each game, the kids could go pick the sugariest thing ever to eat right before bed.  Neat!

While I like healthy foods and prefer Jack eat better things than three feet of licorice, I’m not going to deny him the experience that the rest of the team gets.  I just hope and do my best that he eats well as much as possible.  And when all else fails, I can tell him this happened because of all the sugar. 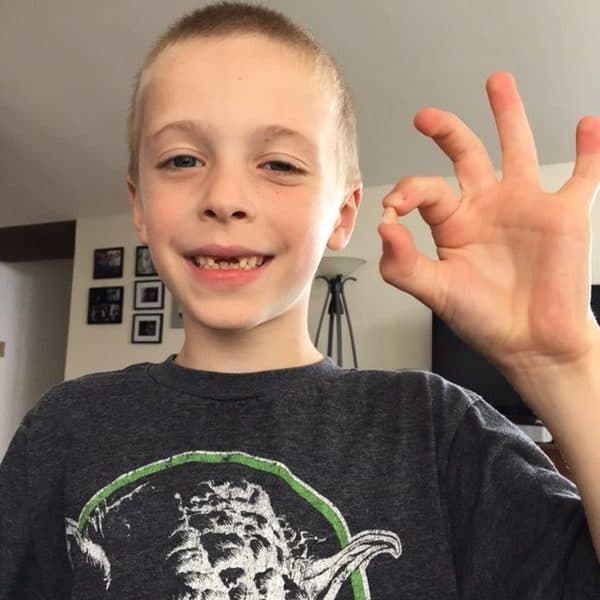 I kid, I kid, I never said that.  Those teeth have been loose as a mo fo for weeks now, and I’m so glad that horrible and disgusting habit of flicking the twisting the loose teeth is behind us for at least another month or so.  He lost one on the floor of Bennett’s bedroom 10 minutes before we had to leave for baseball, and the other one came out during music when he was at school the next day.  The tooth fairy has been busy around here. Jack said he felt self-conscious about only having one front tooth left (false: he just wanted attention), so he asked his friend Elizabeth at school if he looked weird.  She told him he looked even cuter.

Back off harlot.  He’s only seven.

Last week while we were driving to pick strawberries, my mother-in-law was telling me about this amazing almond butter she found.  She said she bought it, and it wasn’t until she got home that she realized it was like $12 for a jar.  I told her to send me a picture of it when she got home, because I’d look on Amazon to see if I could find a better deal.  She said something along the lines of “don’t worry about it, I can just pay what I paid because it’s so good that it is worth it”.  While keeping my eyes on the road, I still managed a “bitch please” look, and said “I don’t think we’re speaking the same language here”.

Turns out it was Barney Butter, and I did find it on Amazon for a much better price (it seems to have gone up $7 since I originally found it, but I know the price fluctuates on many things). She gave me a jar, and holy hell, what have I been missing my whole life?  Have you ever tried this stuff?  It’s like crack on a spoon!  I left it in the pantry overnight, and it mated with the Nutella, and a genius crunchy almond, cocoa, and hazelnut baby awaited me in the morning.  And yes, that is pretty much what I eat every morning at 5:50 am for breakfast.  And I’m hungry about two hours later, because, breastfeeding.  Half of a bagel with a slice of Tillamook cheddar, two scrambled eggs (with garlic salt of course), whatever fruit we have on hand, and half of a croissant with nutella on it.  The pink trashy cup is 1/3 cup of organic orange juice (Costco has it!), and the rest is sparkly water.  The glass with the straw is decaf iced coffee with chocolate cashew milk…because calcium? 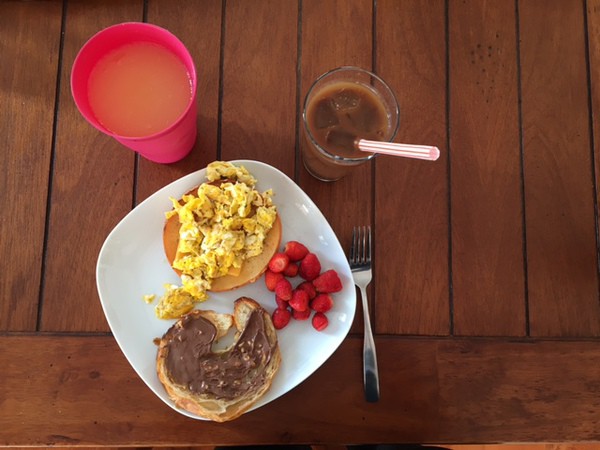 We had Jack’s kid party last Sunday when it was 90 degrees out.  It was 84 in our house, and as much as we poured cool drinks down the kids throats, and provided shade from the sun, one little boy almost overheated!  We had hit sit on an ice pack, and then fed him cake because obviously.

I’m one of those people who loves to cook and loves to entertain, but I hate to actually “entertain” people.  Come over to my house, eat my food, but don’t make me come up with an activity to keep you occupied.  Especially kids.  We have a billion Nerf guns in the house; I shouldn’t have to help you have fun.  I’ve gone to kid parties where there are elaborate scavenger hunts, huge games, and other planned activities for the rug rats.  And that’s totally fine if it is your jam.  It is NOT mine.  So, I decided a month ago that we’d have the kids make their own mini pizzas. It is a perfect solution; an activity to kill time, and it feeds them.  What I didn’t plan on was the fact that heating my oven to 450 degrees would likely render us to the outer realm of hell.

In seeing the temps predicted to climb, I made and baked the crusts the day before at 5 am, so we were basically melting the cheese after the kids made their own creations.  It was so hot that the lemonade and fruit was a bigger hit than the pizzas, but the kids seemed to have fun either way.  Pro tip: give each kid their crust on a piece of parchment with their name written in Sharpie.  Then simply transfer to a pizza stone, and you won’t have to figure out which pizza belongs to which kid. 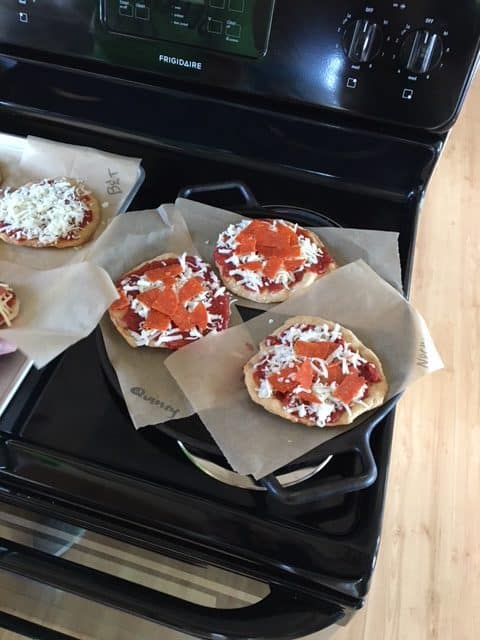 The only planned game we played was “Pin the Photoreceptor on BB-8” (Jack’s creation, and Troy drew it), and yes, this thing is still hanging in my living room. 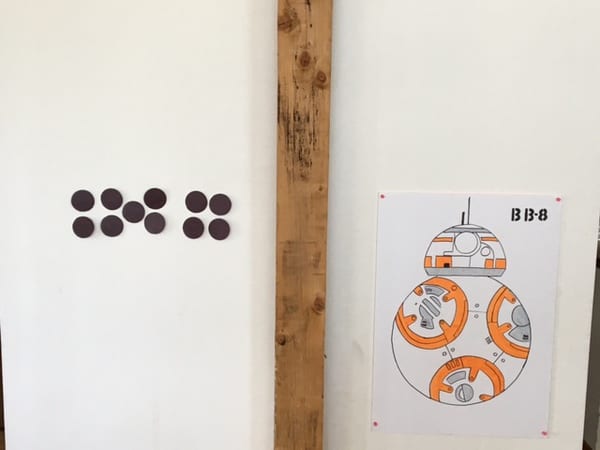 The temps have dropped almost 30 degrees since Sunday, and we go back and forth between sun and rain.  I love the rain and am glad for it, but it’s starting to make the strawberries kinda mushy.

Monday:: Troy’s famous burgers, asparagus (you knew it was coming), and oven fries.

Tuesday:: The weather is supposed to be drizzly, so perfect for homemade stew, bread, and asparagus.  I’m making the stew because of the weather, and NOT because I found a bag of soft potatoes in the garage…

Saturday:: Clean out the fridge/leftovers.