Jack has become obsessed with comic books of all kinds in the last year.  Since March, his interest has bounced back between Calvin and Hobbes (I’m pretty convinced he is actually  Calvin…a crazy, hyper, blonde, only child) and Garfield.  Whatever keeps him quiet and occupied is tops in my book.

On Thursday, Jack and I took a road trip to pick up our new chickens.  You might remember that one of my clients was raising two chickens for us until they were “coop-ready”.  She has about 40 chickens, and was adding 12 more to her flock this year.  Troy’s allergies prevent us from raising chicks in the house, and only two chicks in a brooder seems kind of cruel anyway.

The poor birds rode around in an Amazon box in my backseat, and then promptly scared the freaking shit out of my chickens when I brought them in to the coop.  Troy had sectioned off a small part of the coop with some chicken wire to give the “newbies” an isolated portion so that the older ladies can get used to them.  By “getting used to them”, one of the chickens flew over the fence that is so high they have never even attempted to fly over, and then promptly got herself cornered in a hole.  I used a bendy garden stake to make a loop and “hooked” her out of there.  I felt like I was pulling a vaudeville act off of the stage.

The “old” girls just spent about an hour screaming their beaks off until I bribed them to shut the hell up with a custom batch of popcorn.  The new girls were upset that night because I didn’t think they actually needed a roost yet.  They ended up snuggling on an overturned Amazon box with a piece of a 2×4 perched on the top.  I’m sure they spent the night discussing their new trashy digs.

I am pleased to introduce you to, Garfield and Odie, our two newest ladies.  They’re blue Wyandottes. 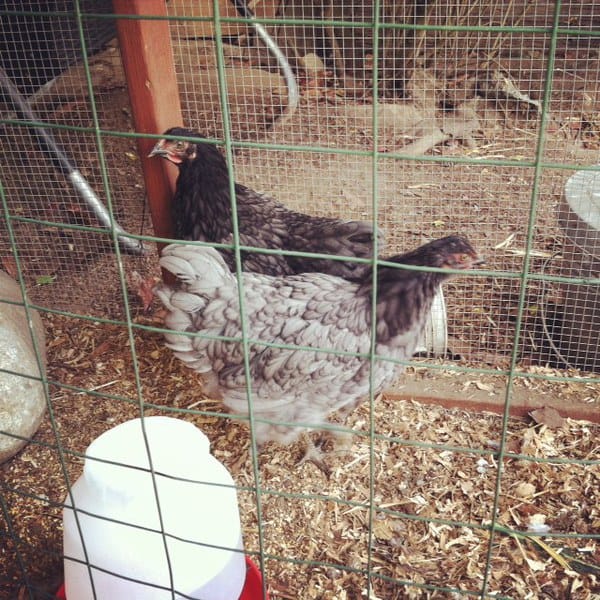 Today to celebrate Father’s Day, we’re headed to my parent’s house for dinner.  I made lasagna and a red velvet cake (Troy’s favorite), and my sister and aunt are bringing bread and salad.  Jack and I made this present for the special day: 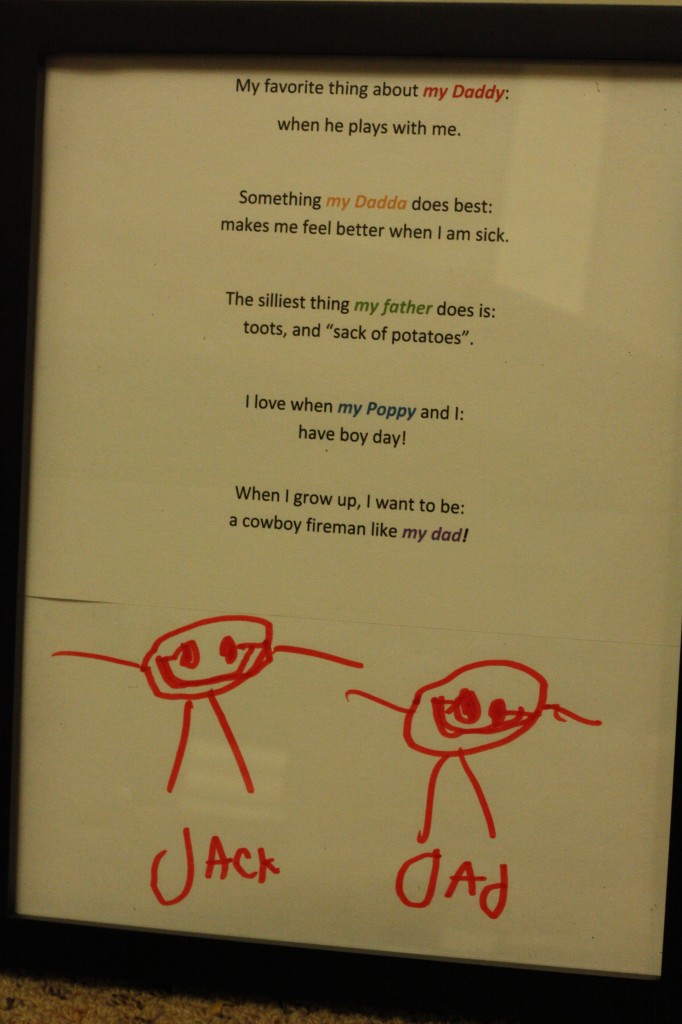 FYI, “sack of potatoes” is when Troy wraps Jack up in a blanket/towel after bath, and then carries him around the house saying “mommy, have you seen this sack of potatoes I have here?” and then he purposely (lightly and VERY gently) bonks Jack’s head in to doors and walls.  Jack laughs his crazy little head off the whole time.

Meal plan time!  Reminder, I only plan dinners.  My breakfast of choice is homemade Greek yogurt with tons of cut up fresh fruit (or fruit I froze in the summer), and a homemade granola bar crumbled on top.  It’s delicious and keeps me completely full and satisfied until lunch. Lunches are always leftovers.  We rarely eat dessert during the week, and our dinner drink of choice is water kefir soda.

Monday:: DATE NIGHT!!!!  I’m off on Tuesday, as is Troy, and Jack is spending the night at my aunt and uncle’s.  Troy and I have gift certificates for dinner and a movie.  Can’t wait!

Tuesday:: Our local produce stand opened up this weekend and I’m super duper excited!  I picked up some squash, and we’ll (Troy…I don’t grill) grill them up with some sausage I got from our local butcher, asparagus, and sweet onions.

Wednesday:: Salmon cakes from the freezer.  Yeah, this so didn’t happen last week.  I had scheduled to have them on a day when Troy wasn’t going to be home.  Total rookie mistake.  I had zero desire to try to force Jack to eat a salmon cake on my own (“mom, why is there fish in CAKE”?), so instead, we had peanut butter, apples, cheese, peas, and strawberries.

Sunday:: Family dinner at my parent’s, where they are celebrating their 40th wedding anniversary.  FORTY YEARS people.  Damn.

This week I spent $3.50 at our local farm for raw milk, $21 at the produce stand for squash, asparagus, and cherries (I think I’ve made myself sick by eating them), $31 at Costco, $21 at Trader Joes, and $31 at the regular grocery store.