I am so freaking over strawberry season right now.

Don’t get me wrong, I love strawberries.   I’m happy to eat them, cook with them, and make ice cream out of them, but for the love of Pete, I’m done processing them.

When I made jam last week in “jamcademy”, I didn’t get nearly enough to keep us in jam for until next June.  I was off for most of this week, so I went back to the u-pick strawberry farm to pick 30+ more pounds of strawbs. 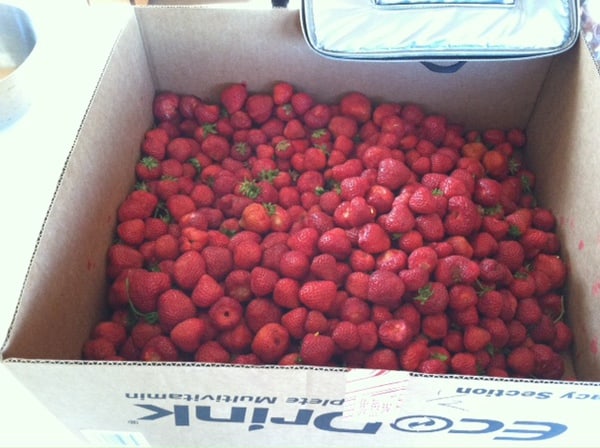 and before you can say “Jack do you want to watch Toy Story”, I produced this: 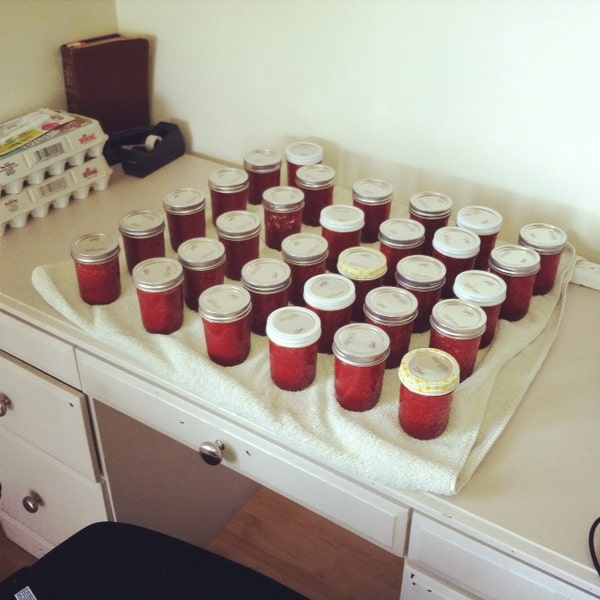 What, you guys don’t keep egg cartons and the bible on your computer desk??

I feel comfortable in saying that if I can just keep Troy and Jack down to one jar a week, we’ll be safe until next spring.

Friday, I made eight loaves of sandwich bread, and then Jack and Troy promptly consumed half of a loaf and a jar of jam.  So, go ahead and ignore what I said in my previous sentence.  We’re screwed six ways to Sunday in terms of having enough jam.  :sigh:

I sent this photo to a few of my friends earlier this week with the caption “don’t adjust your phones, my legs are really this white”.  Awesome.  They actually glow a bit, don’t they? 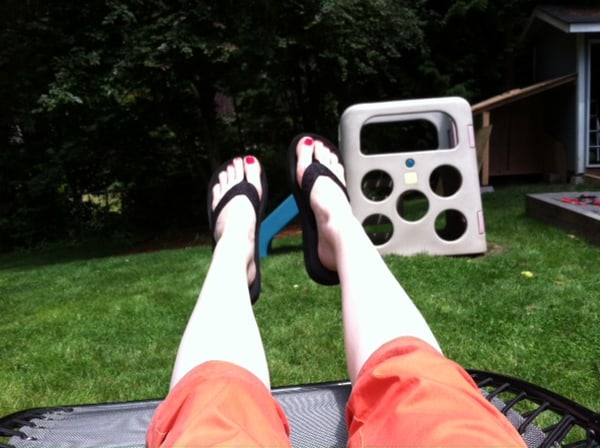 Thursday was Jack’s last of preschool, and I’m going to miss the shit out his teachers.  They were amazing with him, and I’ve never seen him sit so still for so long as when he was in the classroom.  Those  women were magicians and could actually keep my boy, who resembles a hummingbird that has been shot up with black tar heroin, calm and focused.  They ditched his preschool curriculum long ago, and were letting him do all the work the kindergarteners were doing.  They pushed him, they challenged him, and they kept him from significantly injuring anyone during his time there.  Since I can’t afford solid gold bars and unicorns, I wrote each teacher a really heartfelt card and gave them a potted plant that took me three fucking days to complete. 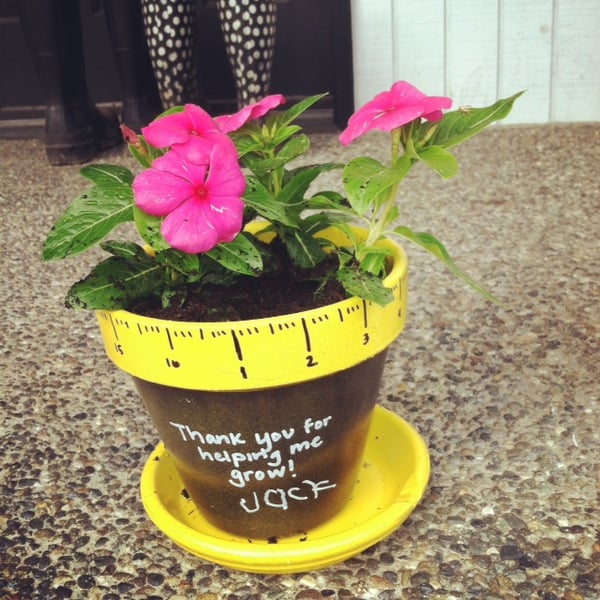 My friend Michelle made the same flower pots for her son’s teachers and inspired me to try my hand at it.  Hers look way better.

Meal plan time!  Reminder, I only plan dinners.  My breakfast of choice is homemade Greek yogurt with tons of cut up fresh fruit (or fruit I froze in the summer), and a homemade granola bar crumbled on top.  It’s delicious and keeps me completely full and satisfied until lunch. Lunches are always leftovers.  We rarely eat dessert during the week, and our dinner drink of choice is water kefir soda.

Wednesday:: I again let Jack pick what he wanted for dinner, and again, he chose “a bowl full of candy”.  Again, we compromised, so again I’m making homemade pizza and stir-fry pea pods.

Thursday:: Dinner at my in-laws.  No idea what it will be, but it is always freaking a-mazing!

Friday:: Fourth of July BBQ at my in-laws.  It’s like Christmas for your mouth.

Sunday:: Dinner at my parent’s!

This week I spent $3.50 on raw milk at the local farm, $9.48 at our local produce stand, $42 at the grocery store, and a whopping $105 at our local butcher!  I ordered a box/flat of chicken breasts from them a few weeks ago, and they were finally ready.  Because I purchased an entire box, they took $.20 off per pound, so $3.09 a pound for local, free-range delicious chicken breasts.  My freezer is full and happy!