If you were currently in a Lutheran church, the pastor would follow that statement with a calm (Scandinavians don’t like to shout or make a big deal out of things) “He has Risen”, to which one-third of the congregation would reply “He has Risen indeed”.  The other two-thirds would look blankly because they only come to church on Easter.  Lutherans. We’re a fair-weather religious people.  🙂

I hope whatever this day finds you doing, it is filled with love, laughter, family, friends, and chocolate eggs.

Last weekend and the start of the last week was a bit of a challenge in our house.  It started on Friday the 18th with me feeling pretty dizzy.  I had been dealing with what I thought was the start of spring allergies, a dry cough, runny nose, etc.  Assuming the dizziness was related to the coughing, I thought nothing of it until I woke up on Saturday on my ass.  Vertigo had struck, and at a horrible time.  I missed Jack’s opening ceremony for baseball, and spent most of the day laying on the floor with Bennett.  Thankfully I carry his food with me, so I didn’t need to crawl around to make him any meals.  Just lay there, unsnap my bra and try not to throw up from the spins.  The vertigo continued until Tuesday, and just made the week start off in a “meh” kind of way.  Holding on to walls when walking is not an efficient mode of transportation.

Thankfully, I’m feeling much better and am back to normal.  I received some great advice on Facebook about upping my protein to prevent the vertigo from returning.  The day before I started feeling better, I had an English muffin with peanut butter and honey right before bed.  No clue if that actually helped or not, but I’m always down for trying to heal with food.  Especially delicious peanut buttery goodness.

I’m infinitely grateful that we were blessed with another child.  I never once take that gift for granted, and Bennett is loved, and was prayed for over the course of a year. He is truly the missing piece of our family.  That being said, I’m about to say something I never thought, nor ever wanted to say in my life…Bennett is a worse baby than Jack.

Fuck, I know.  That’s saying a lot, because Jack was a BAD baby.

I was a horrible baby.  As in, if my aunt and uncle hadn’t already been pregnant with my cousin when I was born, they would have never had kids.  That bad of a baby.  My sister however?  Angel baby.  A freaking dream child.  Based on what I hear, she pretty much slept through the night the second she was born, and probably wiped her own ass to save my parents the trouble.  That is how it is supposed to work.  You get one shitty baby, and one perfect baby.  If you had told me a year ago that Jack would be my good baby, I would have laughed and then punched you in the face.

It kind of came to a head on Friday.  Bennett was fed, fresh diaper, and warm and cozy clean clothes.  And he was crying for the 30th hour that morning (I can do math) for no fucking reason!  I turned to Troy and said “I just don’t like him very much”.  Troy of course was confused and worried about it, but I explained it as “he isn’t likeable right now”.  Do I love him?  Yes. I would do anything for him.  I would destroy anyone who ever hurt this child, and I would go to the ends of the earth to make him happy.  But NOTHING is freaking working to make him happy.  We get smiles and coos about 2% of the day.  The rest of the time it is just crying, screaming, or being a royal pain in the ass.  I told Troy “if he is going to be this cranky, I’m eating some damn cheese”.  Giving up dairy hasn’t even touched his punky attitude.

He was born with clogged tear ducts that will likely clear up by time he is one.  With him catching my sniffles and cough, the discharge (gross word) that was coming out of his eyes was milky and gross.  I took him to the pediatrician on Friday to make sure he didn’t have an infection or anything.  I also used the time (hey, I already paid my co-pay) to talk to the doctor about Bennett’s overall piss poor attitude.  I told her he’s always angry or fussy or crying about something.  He was laying on my legs when I was talking to her about it, and she smiled and said she knew what I meant.  I looked down and saw this. 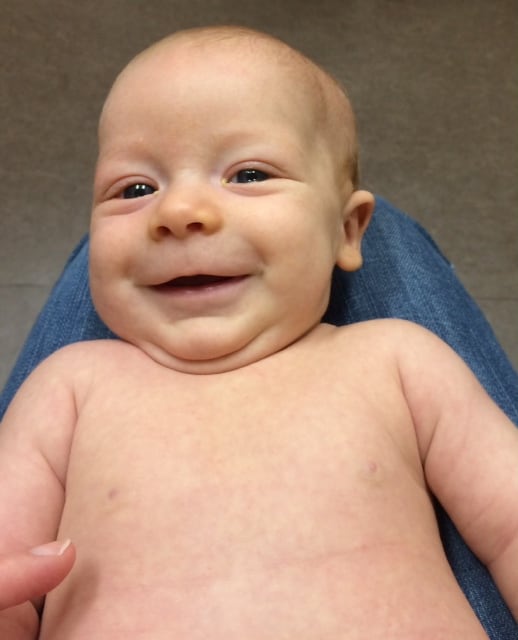 He loves making me look like a damn liar!  Sadly, she didn’t have any suggestions that we weren’t already doing, so I feel disjointed and stressed about him.  I refer to him as the Hurt Locker; we’re never sure when he’s going to explode.  That’s an exhausting way to live, and thankfully I know if he is like his brother, he’ll eventually grow out of it and become a really kick ass big kid.

File the above and below photo under “my kids are twins”.  This is Jack at eight weeks (and yes, that is a tattoo on an infant): 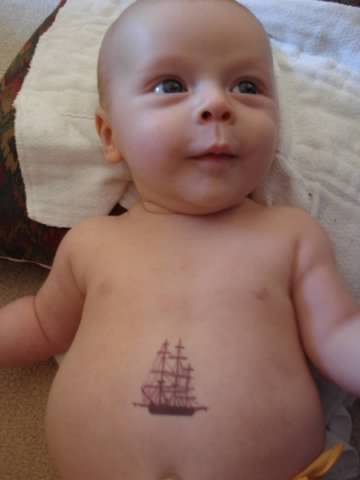 Please don’t fret for my sanity or my mental health.  This is nothing more than frustration at a situation I didn’t expect. Please don’t discount the real problems that women who deal with post partum struggles go through by suggesting I have something along those lines.  This is not that.  This is wishing I had a way to fix my boy and keep a smile on his face for more than five minutes a day.  We all deserve joy; even the littlest among us.

In a rare moment of calm for Bennett, Troy snapped this photo and then had fun on memegenerator.com 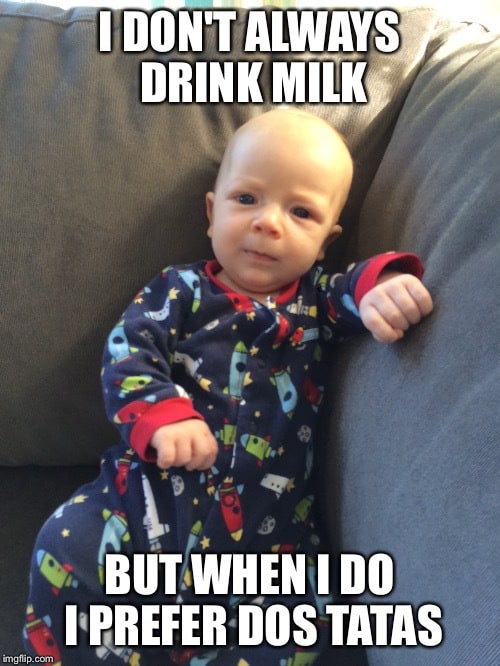 And we were lucky to have another peaceful moment at church’s Easter egg hunt yesterday to snap a brothers photo with the Lutheran Easter bunny.  Anyone else notice that Jack’s skin is the same color as the bunny’s fur. Note to self: stock up on more sunscreen. 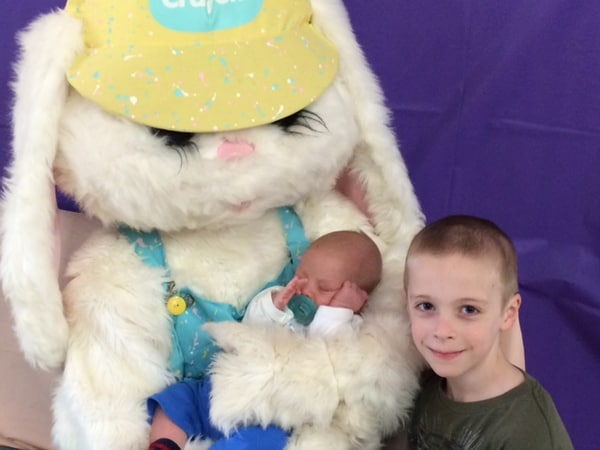 Spring has returned to the Pacific Northwest, and thankfully the chickens received the message as well, and they are starting to crank out eggs again.  Spring, you were missed and your return is welcome. 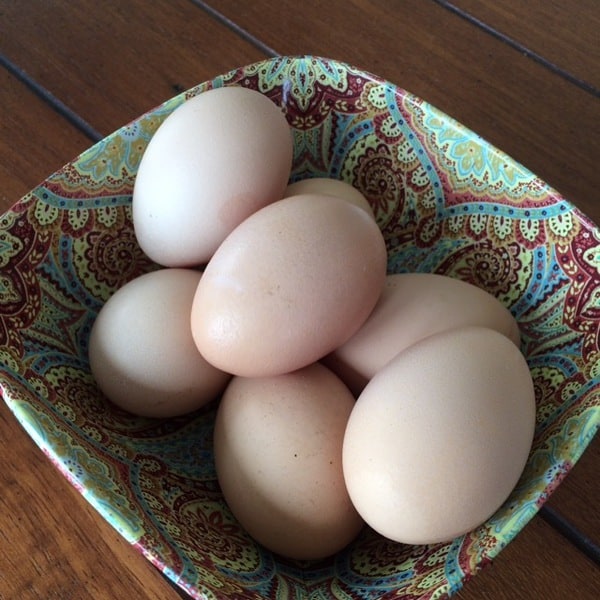 With Mother’s day coming up, if you’re at a loss at what to get that special someone in your life, may I suggest this gem that I happened upon the other day?  Both are such fabulous choices and you can’t go wrong with either. 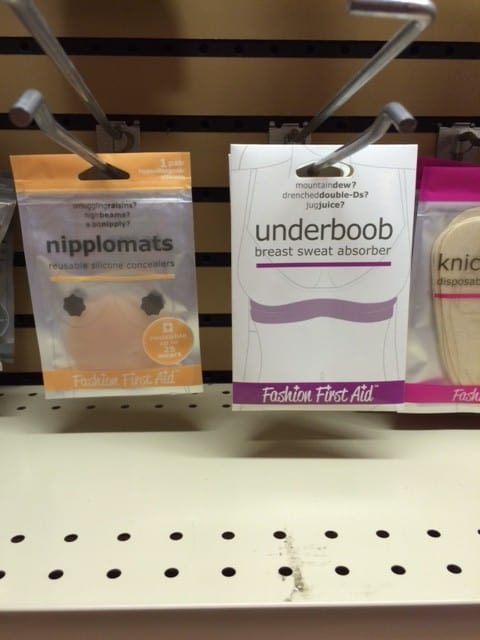 Meal plan time!  We don’t have any baseball this week, and that means more flexibility for dinners.  They don’t have to be scarfed in a matter of minutes, and the time to prepare them is more generous.

Saturday:: I would very much like to go out for dinner.  We’ll see.