I fear we may have some copyright infringement issues going on in our house.  It appears that we make carbon copy kids around here.

Jack at three or four months 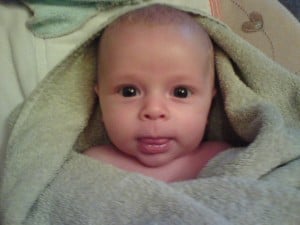 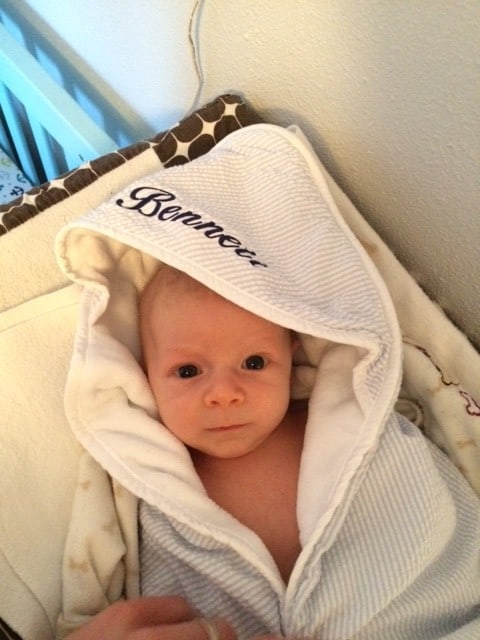 Hopefully the lawyers don’t come after us too aggressively.

One of the things we’ve tried really hard to do since Bennett came along, is have one on one time with Jack.  It doesn’t always happen, but we do try.  Randomly about a month ago, he wandered out to the livingroom while Troy and I were watching Jeopardy (nerds).  He got one of the questions/answers right, and has been hooked ever since.  The new rule is, he has to be in bed at the same time as always (7 pm), and he can read until 7:30 pm, and then can watch Jeopardy with us until 8.  He used to be allowed to read until 7:45, so technically he is going to bed later than I would prefer, but he’s having such a good time and learning a lot too.

Well, randomly, on Friday, he decided that he was obsessed with chapter books, and started carrying around whole series that we have had on his bookshelf for a while. 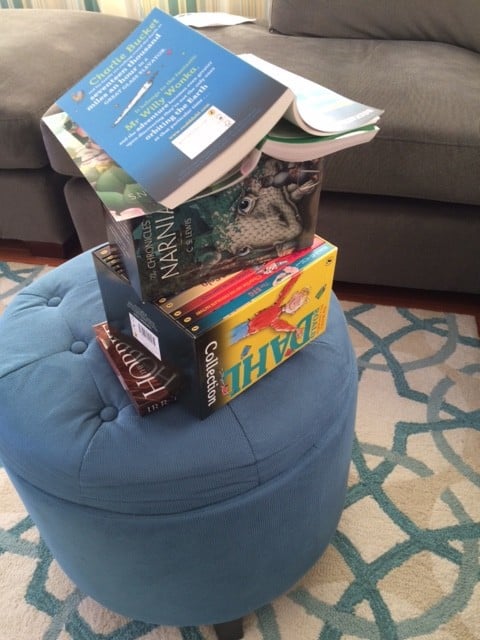 He brought all those books out Friday night and wanted to read while watching Jeopardy.  This multi-tasking nerd momma has never been prouder!  He finished Charlie and the Great Glass Elevator in about 18 hours, because I allowed him to bring it to church today (God forgives I believe).  At first Troy and I thought he was just skimming the pages to try to look cool about reading chapter books, but while quizzing him during our nightly snuggles (we talk about the best part of his day, and the part he wished had gone differently), he could tell me the entire plot!  He has declared his wishlist for his upcoming seventh birthday to be “chapter books, Legos, and Star Wars stuff”.

In Bennett’s world, the new reflux meds have started to kick in.  He’s not 100% yet, but we can tell he is feeling better, because the days are fewer tears and less screaming, and more of these: 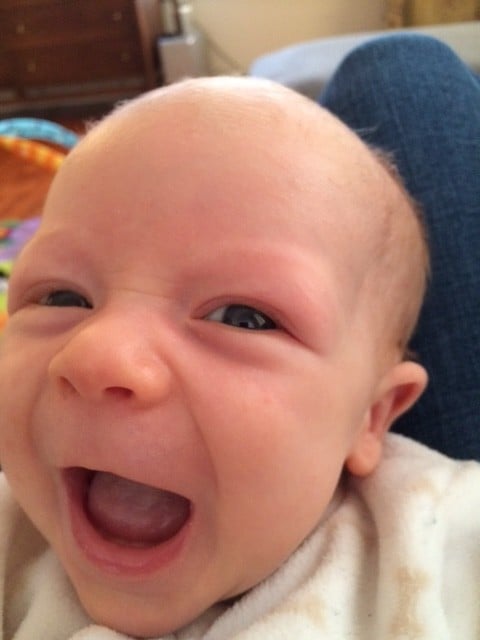 Troy went back to work this week, and it is also the week that we started watching my nephew before and afternoon school.  It is a perfect arrangement since the boys go to the same school and have the same schedule, and they have a blast together.  Plus, Jack and my nephew were at the same daycare that my sis and I weren’t totally thrilled with (but it was the only one in our school’s boundary), so this gives my sister a better option. My sis and her husband are building a new house that should be done this summer.  One of the features of the home will be air conditioning, a decision that was made after last summer being the hottest on record in Seattle, to the point where our boob sweat had boob sweat.  For the first month I am watching my nephew, I am earning their old portable a/c unit.  Praise the lord!  Plus, Jack and my nephew enjoy “entertaining” Bennett. 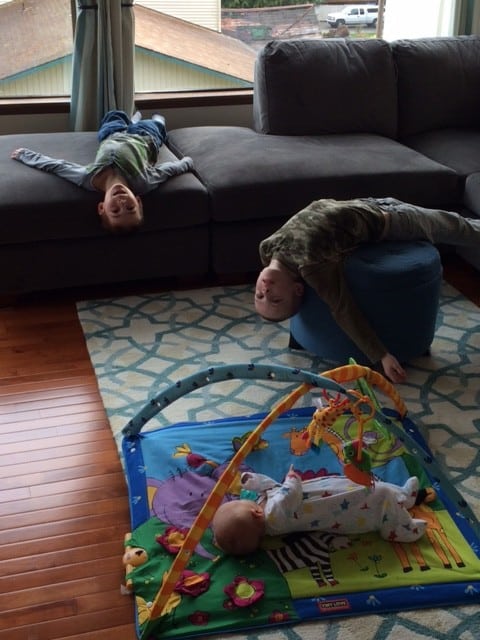 The first day Troy was at work and I had all three boys to myself, my former “get a lot of stuff done” self kicked in to high-gear, and I was able to feel productive for the first time in a while.  I sent this text to Troy:

In addition to Troy working, he was also not feeling well on Saturday (he told me he has mastitis), so I braved a solo zoo day with both boys.  Bennett is not a fan of the stroller, so we did a two hour circuit of the zoo with just the Ergo and a diaper bag.  I realize it’s not like the most courageous thing ever, but I felt pretty accomplished taking them by myself. 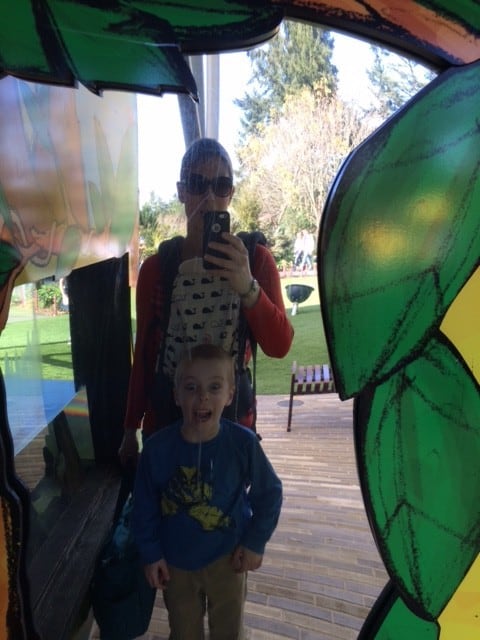 I’m not totally sure, but I believe that Jack has gone through a wee bit of a growth spurt.  Here he is on December 4th: 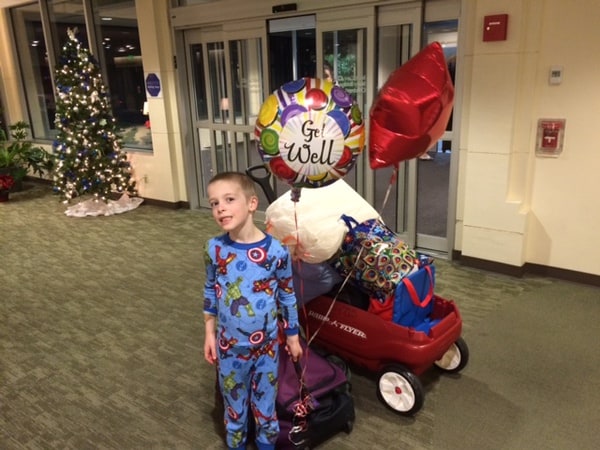 Here he is March 4th. I may need to stop feeding him to get this to slow down a bit. 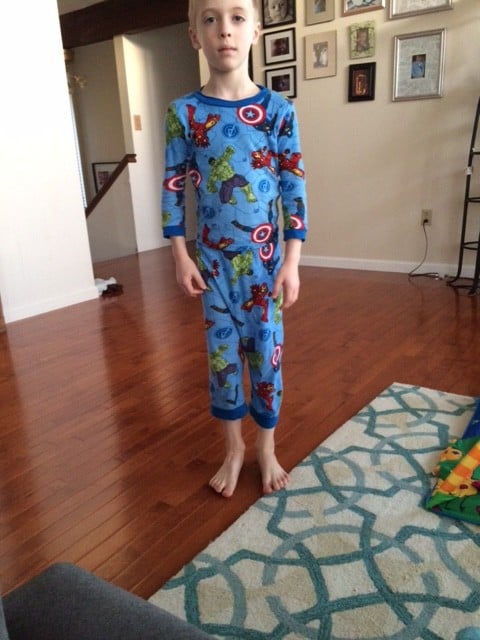 As I was writing this post, I had to keep getting up to go calm Bennett down.  Homeboy was NOT ok with the idea of a nap.  We’ve been doing fairly well getting him to take at least one solo nap a day, but he was fighting it today.  At one point I came back to the table, and found this: 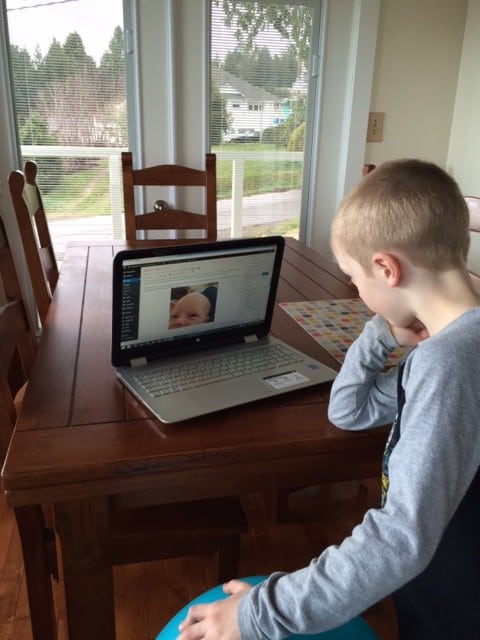 So now Jack knows I have a blog.  🙂  He said he liked the photos and wanted to sit with me while I wrote more.

Meal plan time!  Jack starts baseball practice this week, so it is going to mess with dinner plans a bit.

Monday:: Chicken and dumplings, salad.  I used this recipe as the base, but pretty much tripled the veg, amped up the spices, used chicken breasts (for some reason, chicken thighs creep me out) added fresh garlic, and used three quarts of homemade chicken broth.  I like a brothy soup yo!

Saturday:: My nephew is spending the night, so we’ll probably go out.  Or have popcorn again.