So my boy hasn’t been in trouble (on red) in the whole month of November!  I’ll share a few things we’ve been doing that I think have led to this “success” for any other frustrated parents out there.

I was off on Friday and took Jack to school.  The kindergarteners go to the library first thing in the morning, and the librarians walk them to their classroom after the bell rings.  I popped in to his classroom before it was full of the germ filled amoebas (kids) to drop off some new books I got at Goodwill.  His teacher asked us last month to bring in interesting books for him so that when other kids are doing their sight word homework, he has something to keep him occupied.  He then has to do a “book report” on what he read, by writing six sentences and drawing a picture.  If he writes more than the six sentences, he gets to read his report to the class.  It has proven pretty effective, and I was there to replace his dinosaur encyclopedia with some nature books, and kids version of an anatomy and physiology book.

His teacher happened to be in the class, so we talked about his progress, etc.  She said he is doing much better overall, but especially in his tattling.  Last week I received an email from her that he didn’t tattle once all day.  She said that she has a very competitive classroom this year, and already much of the class is reading better than expected at this point in the school year simply because they are trying to compete with Jack.  She reported that last week was the first time Jack struggled in any assignment, and it was writing “sh” words.  I wanted to laugh and say he probably didn’t realize there were actual words that started with “sh” because all he hears from me and other adults is “shhhhhhhhh, stop talking”.

She did warn me that even with the improvement there would likely be some “2’s” on his report card as areas for improvement.  I told her that wouldn’t phase or surprise me, but what really mattered to me was that he was improving in his behavior, and not being disruptive.  His teacher acknowledged he is trying so hard to make good choices (and I certainly hope she is also telling him that…) and to be a good overall kindergarten citizen.  She then said “and we don’t like to put labels on kids, but he does have some tendencies that kids with ADHD have”.  Having heard this one before from many people, I very politely responded “yes, I know why you don’t like to put labels on kids, because it’s actually illegal, but all the doctors we have spoken to said he doesn’t have it”.  We talked a little bit more, and I left with a very civil “I’m glad to hear he is improving, and I know he’s working hard.  My main goal for him is to learn, be productive in the class, and not get his soul crushed by only hearing negative feedback”.  I didn’t say that last part in a bitchy way or anything, but I hope it drove home the point that all the positive changes we have seen in the last month are the result of focusing on the positive!

In home remodel news, the contractors have been so freaking busy this week.  Insulation, drywall, and additional framing took place.  I’ve never lived around construction before, but they were doing something this week that made my whole house smell like burnt sugar.  I recently gave up sugar for a month (except for Thanksgiving, and my once a week coffee treat), and that smell has made it extra hard!  From what I understand, they’re “mudding” and patching next week.

This used to be our rinky dinky little linen closet.  The house is a decent size (3 bedrooms, 3 baths), and I always thought this closet was so inadequate. 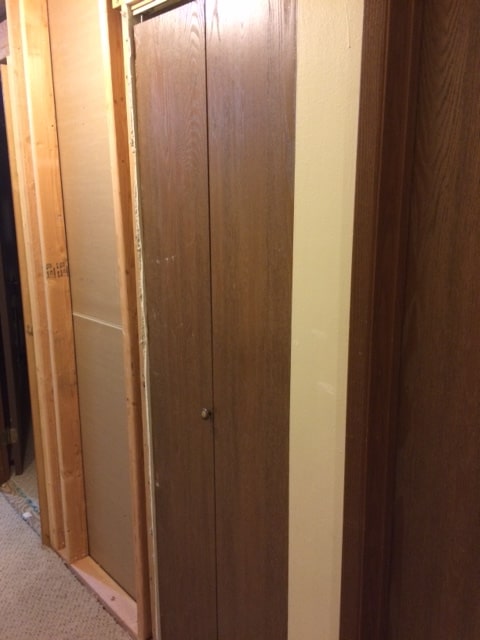 Here is where they cut in to the temporary framing they made out of our master, which is now our extra bedroom that we are bunking in until the new master is ready.  It was sure romantic to have half of your bedroom open to the hallway for a few nights.  It’s a good thing Jack is a heavy sleeper… 🙂 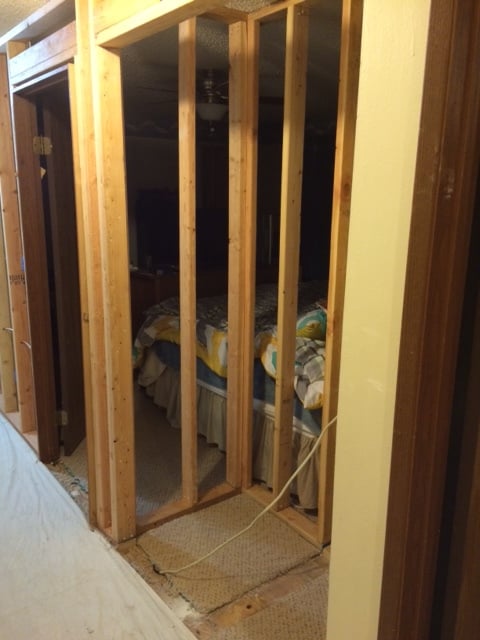 And here is my new mondo linen closet that has been framed out!  It’s much bigger in person (that’s what she said), but I can’t stand in front of it to take a photo and have it all fit in the frame, so this is taken at an angle. 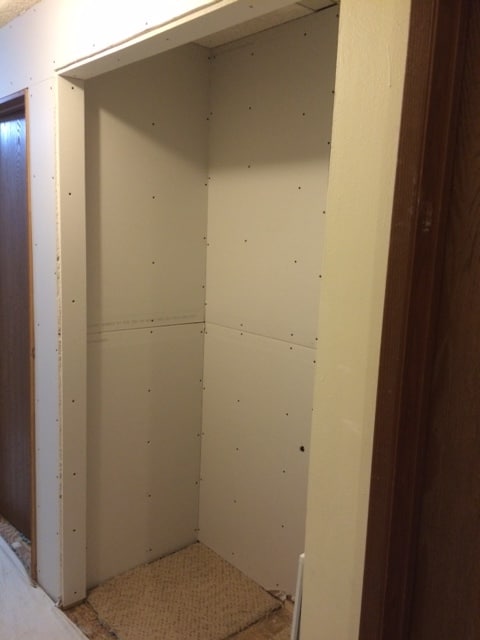 The door from our old bedroom and closet in to our master needed to be closed up to the hallway.  In the future, we’ll access those rooms from our new bedroom.  There was a lovely large closet in the master bathroom that has been torn out to make for an entry in to the bathroom, so the new linen closet will serve as both towels, linens, toilet paper, and bathroom stuff storage.

Here is the door to our master bathroom (taken from the little cubby hole we’re currently sleeping in) as they started the framing. 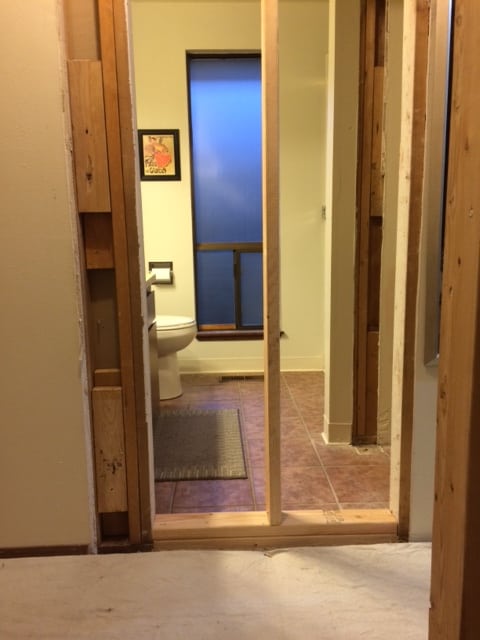 And here is what it looks like now. Isn’t the old 80’s wallpaper border amazing?  It’s like a trip back in time to the Golden Girls set. 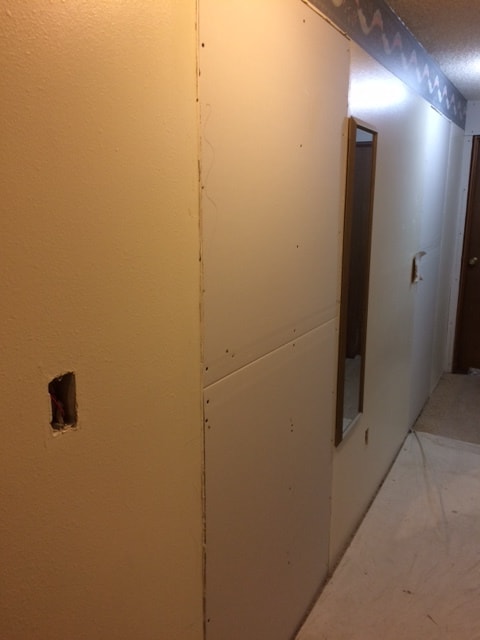 Here is a quick little video of our new master right after insulation and drywall was put up.  The black hole at the end is our closet, and the pass through to how we will get in to our master bathroom.  But it’s dark because I couldn’t remember where the electrician put the light switch, and we have heavy moving blankets in the bathroom doorway to keep it from being freezing cold in there.  Oh, and the sound isn’t of me farting a bunch, but of the guys working downstairs using a nail gun.

Monday:: Quesadillas, tomato soup I canned last year, and chef salads.  Yes, that dinner WAS on the menu last week, and no, it didn’t actually get made.

Tuesday:: Spaghetti, salad, and peas.  I’m trying to tidy up my freezer, and have a ton of frozen peas.  Jack doesn’t like noodles of any kind, but I just felt like having spaghetti for once.  I think the last time we had it was over a year ago.  I still have the same package of whole wheat noodles to use.

Thursday:: Turkey day at the in-laws!

Saturday:: Homemade fried chicken tenders, coleslaw, and something else (any suggestions? It would need to be light and healthy to counteract the chicken)

Sunday:: Turkey day with my side of the family!

This week I spent $3.64 at the local butcher (ground sausage for the spaghetti, because Troy can’t understand spaghetti without meat in the sauce, while I prefer it meatless), $3.50 at the farm for raw milk, $51 at the grocery store (groceries for this week, and for our contributions to two Thanksgivings), and $6 at Costco.