For those of you who follow me on Facebook and Instagram, you’ve seen many of the photos in those post.  For everyone else, maybe you should follow me, and not be late to the party (or don’t be tardy for the party…).

Let’s start off with a Jack update, shall we?  Last week, he had an 80% report of “great day!” overall.  Tuesday was a little bit of a challenge, but in the grand scheme of things it was really small.  Jack and Troy had a big discussion about when tattling was “tattling”, and when it wasn’t.  Troy gave a few examples when something isn’t tattling, and wouldn’t you know it, those situations happened at school on Tuesday.  So, Jack told the teacher, and then was told he was tattling.  Talk about one confused five year old.

He has also developed frequent urination to the point where he is going almost every five minutes.  We’ve taken him to the doctor, and there is no physical reason for this to be happening, so the best we can figure out with his medical team, it’s psychological and related to anxiety about school.  His teacher lets him go to the bathroom as much as he needs to, but on Tuesday he was being really disruptive about it.  Saying bye to everyone every time he left the classroom, etc.  We tried to tell him that no one needs to know (except his teacher) when he’s leaving, blah, blah, blah, but what finally clicked was when I told him that he needs to be a bathroom ninja and sneak out of the classroom without anyone (except his teacher) noticing.

The problem has not returned since then.  🙂

His “FOCUS” sign seems to be helping, and is the basis for his daily reports from the teacher.  He told me on Monday that “I was about to make a bad choice Mom, and then I saw my sign”!  Troy is going to take him to school on Tuesday, and put a bungee cord around his chair legs.  Something along those lines was suggested by a few of you lovely readers, and I got the go ahead from his teacher on Friday.  In the education world, they’re known as “fidgets”, and help keep movement oriented kiddos focused on their task, because you’re essentially giving them a tool for directed fidgeting.  The bungee cord will allow him to bounce his legs, all while keeping his hands calm enough for his work.

Speaking of emails (and FB private messages), I promise I’m not ignoring you, and have a goal to respond to everyone by the end of this week.  I received so many kind and helpful suggestions last week, that I can’t simply respond to everyone right away.  With my work schedule being what it has been, I’m only able to get to about two or three a night.  I’m really going to try harder this week, so if you emailed me, I swear I’m not being a giant douche.  I will respond!

I was off on Friday, and went to IKEA with my mother-in-law to pick up our new chairs for our new table.  About six months ago, I bought a dining room table on Craiglist for $60.  My uncle, who builds beautiful wooden boats, kayaks, and paddle boards, raised it up about five inches. 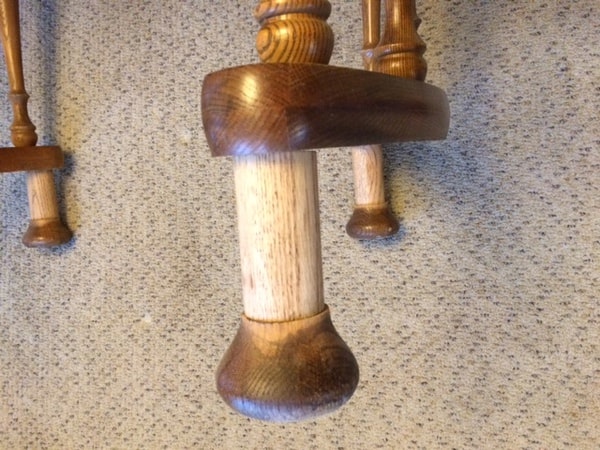 The addition doesn’t look so light in person. You can barely tell anything has been added on.

We needed it higher so that when my parents move in, my mom can just roll herself right up to the table.  Also, my dad, is a notoriously anti-social table sitter-atter (that’s a thing), so I wanted to not give him an opportunity to cop out at sitting with us by saying the table is too low (my dad is 6 ft 7 and has a fake leg, so getting low is bad news).  The table has beautiful legs, but some asshat decided to put a piece of laminate on top of it.  It’s so ugly and looks like it belongs in a 70’s porn.

I went to IKEA with the idea of getting padded bar stools, but fell in love with some padded chairs they had.  Sadly, the chairs were too short, and the bar stools were too tall.  I ended up buying four of the stools (but only two chair covers because while IKEA had 21 stools in stock, they only had two chair covers on the shelves…), and then Troy spent a really fun Saturday afternoon cutting the stools down to table height.  A fabulous way for him to spend about five hours on a weekend.  We’re going to get more chair covers, and I have fun plans for the stools, so stay tuned.

Before the stools were put together, and then cut down, we enjoyed a lovely Halloween dinner feeling like Edith Anne at the high table on our short folding tables. 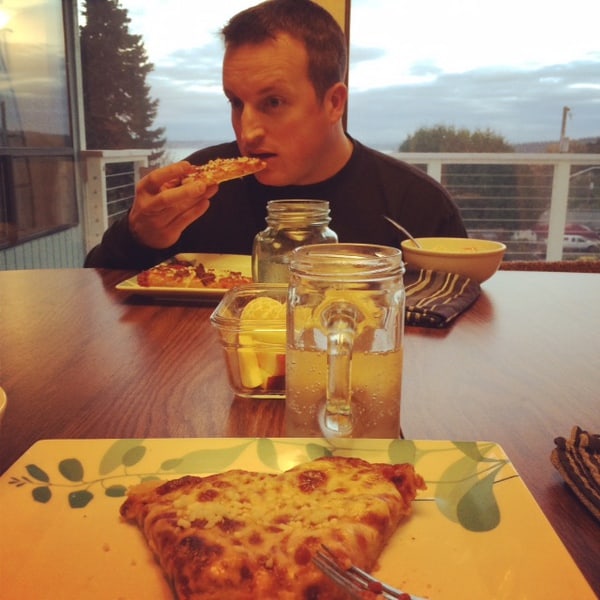 Speaking of IKEA, I’m on the hunt for area rugs for our living room.  We’re going to be putting in wood floors early next year, and I want something fun, bright, and timeless.  What do you all think of the one in the middle?  I like the one on the right, but need something with color. 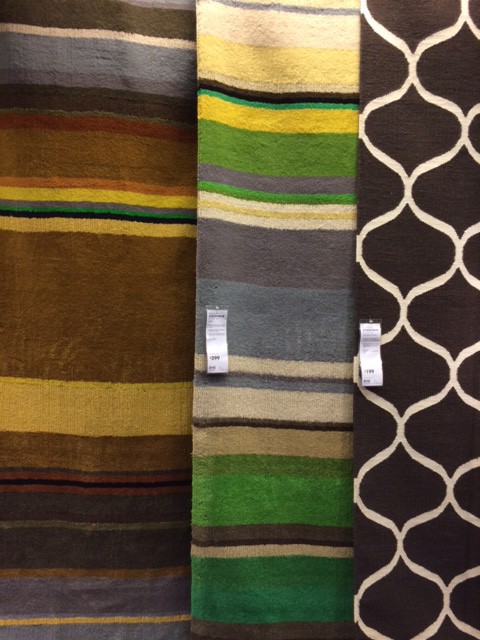 Troy and Jack carved their pumpkin Thursday night, and well, it’s such a “boy” pumpkin. 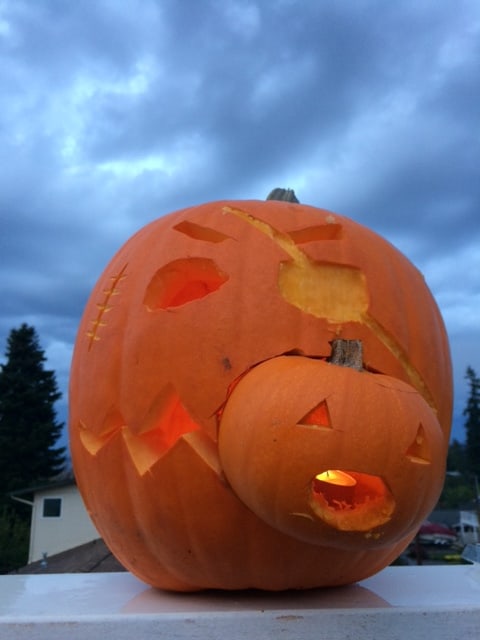 How was everyone’s Halloween?  It had been pouring here all week, and all day on Friday, and then just stopped around dinner time.  What a blessing (hi Anna) to not have to try to work an umbrella in to the costume.  Jack went as an “army” guy, and freaking cleaned up on candy.  We live in a very safe neighborhood full of single-family homes, and back in the day, the streets were teeming with kids.  You had to buy multiple bags of Costco candy to avoid running out before the kids stopped coming at 9 pm.  The neighborhood is very hilly, and parents used to drop the kids at the top of the hill, and pick them up about two hours later.  It was bananas.

Now?  You’re lucky to get about five trick-or-treaters.  My sister pointed out that kids today are too lazy to climb steep hills to get candy.  But, all the houses still buy like it’s the 80’s and 90’s, and end up dumping fistfuls of candy in to each kid’s bucket.  One lady was giving out brand new Hot Wheels cars, and other lady gave Jack an entire bag of candy corn.  Like a big bag.

Jack traded most of his candy to the Candy Fairy, and requested glow sticks as a trade.  We turned out all the lights, and had a huge glow stick battle. 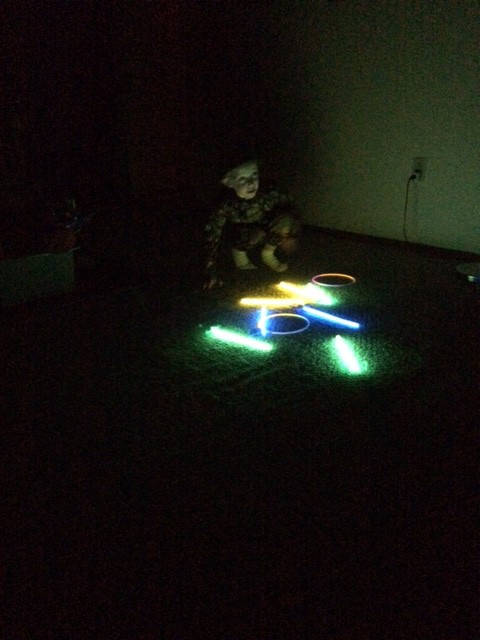 Saturday I went grocery shopping, and Troy and Jack made a video of all candy he kept.  It’s almost eight minutes long, and nothing but Jack talking about candy, but it still cracks me up.

And just because, here is a text that does not qualify me for wife of the year. 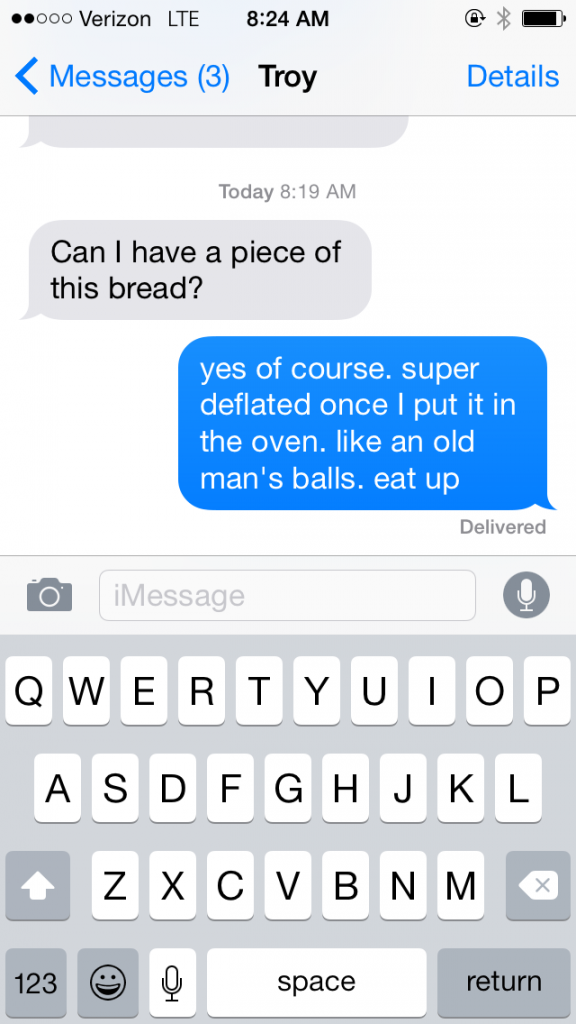 Ready to talk meal plans?  November is going to BLOW for me.  It’s just terrible, and I’m already dreading it.  I only work four days this month where I have normal hours.  Every other day is working late, or some weird ass schedule.  I’m looking forward to December 1st coming along, and pretending this whole stupid November didn’t even happen.  As a result of my stupid schedule, this week is a week of homemade “convenience fast food”.  By the time I get home each night, it will practically be Jack’s bed time.  No time for more complicated fare.  Cause ain’t nobody got time for that.

Monday:: Chicken tortilla soup in the crockpot, sandwiches, and fruit.  Nothing like putting dried beans, a few other items, spices, and frozen chicken in a crock in the morning, and having homemade soup when you get home.  I need to do an actual post on this soup soon.  It’s too easy not to.

Tuesday:: Sweet potato cakes (will do a post on these too.  I created them last year, and they’re tasty and crazy easy), and chef’s salads (spinach, hard boiled eggs, sliced ham, cheese, turkey, and avocado), and fruit of course.

Thursday:: Troy’s fabulous burgers (yes they were on the menu last week.  And yes, we are having them again), sweet potato fries and roasted Brussels sprouts, and fruit.

Friday:: Popcorn and movie night.  Best night of the week!

Saturday:: We’re dining out with my sis and nephew.  It’s my gram’s 90th birthday party, and we’re carpooling to have lunch with her.  Playdate in the afternoon, and a meal neither of us have to cook.

This week I spent $8.93 at the local butcher (for burger), $51.12 at the grocery store, and $3.50 at the farm for raw milk.  We’re headed to Costco on the way to my parent’s, and we’re getting: satsumas, cheese, organic sweet potatoes,  and Italian seasoning (dried). 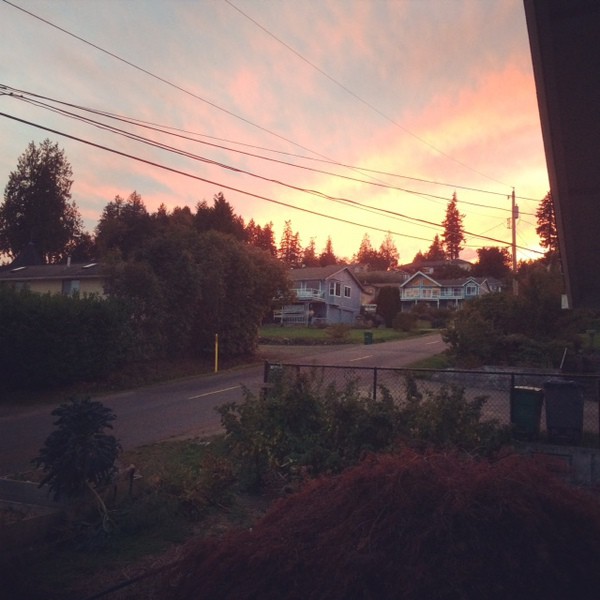