Well, we’re back from Denver/Anne’s wedding and it was amazing. Fabulous. Gorgeous. Fun. And perfect. Everything they are as a couple.

It’s not my place to post photos of someone else’s wedding, but Anne was stunning, and her new husband looked handsome and so happy. It’s always nice to see great things happen to great people.

Anne did happen to take a timely photo shortly before the ceremony. B gave me a nice punch on the chin as his present to me that day. 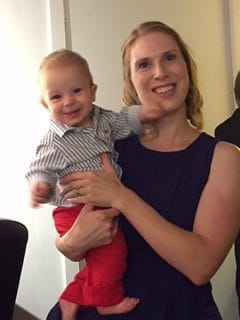 The day before the wedding, they had a huge rehearsal dinner for out-of-town guests, complete with a two-story bounce house for all the kids. It was set up at 10:30 am that morning, and Jack didn’t really come out of it until after dinner. He was covered in rug burns, bruises, and sweat, and had never been happier!

For all the cloth diapering people out there, Amazon has my absolute favorite diaper detergent 15% off now (you click on the coupon and they apply the savings at check out). When we had a normal top loader washer with Jack’s diapers, we loooooooooved Rockin Green, but I cannot get a good clean with it in our HE washer. After trying so many different detergents, wash cycles, and prayer, I finally found that Dropps is the detergent for us. As with any new detergent for diapers, it is better to strip your diaps first (this is hands down the best product I have used for stripping diapers) before introducing a new cleaning agent. We use two pods for the wash cycle, and I’ve never had my diapers look and smell so clean. A tub has lasted us over three months.

We have been working on a big remodel/redesign project this week, and had to store some things while everything gets shuffled around. As I was unpacking other boxes, I came across a photo of Troy and I around the time when we first started dating. 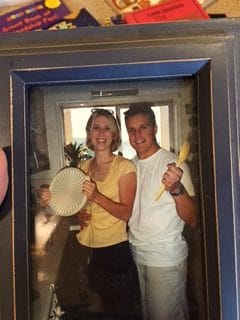 It’s funny, because that photo was on a bookshelf in our LA apartment, and every time I passed it, I cringed at how flabby my arms looked. Now, I look at it and all I wish is that they were still that toned!

Part of the remodeling we are doing, found us sorting through a lot of Jack’s old toys for Bennett’s current/eventual use. He has had access to them all week, and yet, his favorite thing to play with for the last few days has been a personal sized watermelon. Kids. 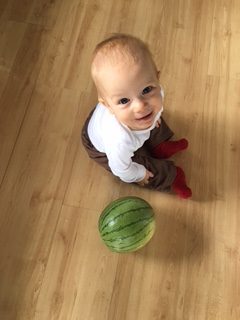 Jack had his first soccer game ever yesterday. He has played at recess for a few years, but always insisted he never wanted to play on an actual team. Constant running, being outside, and kicking things is right up his alley, so we did lean on him a bit thinking he would love it. Finally, last year in October he said he wanted to play, but of course it was too late to sign him up. We weren’t too sure how it would go, but it turns out he rocked it, and scored four of the five goals for his team. I wish I could share photos and the video, but I’m so leery of showing team names, and I don’t have permission to show any of the other kids of course. He had a big smile on his face the whole game, and we celebrated with spicy hot cocoa after the game.

I’m embarrassed to admit that I have had a lovely new customized blog header for a few weeks now, and never thanked my friend Kat. I have known Kat for eightish years now, and the vast majority of Jack’s birthday invites have been masterfully created by her. She has designed loads of other things for me as well, so when she emailed me in summer saying “so, you’re header, yeah…” I knew I could just sit back and trust her and she would make me something awesome. When she showed me the proof, I was awestruck, and then I laughed because it took me about 10 minutes to realize the mason jar in the logo was sitting on a quilt I made for one of her twins a few years ago.

So, thank you Kat as always for your talent and your friendship. And per our agreement, there will always be a place for your family in our house once the zombies attack.

This week and the next finds me back to work a few days to train my replacement. It’s always a bit of a shuffle to get there between helping out my parents at home, Bennett, Jack, Troy’s work schedule, and my nephew getting to school. It works ok for a few days at a time, but is a great reminder of how thankful I am that full-time work is currently behind me. It just doesn’t mesh well with our current lives and responsibilities.

So, let us get down to the brass tacks (I have never understood what that really means, but let’s go with it), and talk meal plan.

Tuesday:: Chicken and veggie lo mein, and potstickers (the organic ones are back at Costco and on rebate! Stock up!)

Saturday:: Fridge clean out, or out to dinner