Saturday, my sister and I headed to the Mother Earth News fair.  We met up with my aunt and uncle, but they had different things that they wanted to do, so we didn’t see too much of them throughout the fair.

Going to the fair was my Mother’s Day present, and I’m totally asking for it again next year.  I had SUCH a great time, and it was so fun to hang with my sister (or lesbian blogging partner according to one cookbook author!) all day.  Minus the kiddos.

I haven’t had a day alone in over two years.  Yes, I realize I was hanging out with my sister, but we’re so exactly alike that it’s pretty much hanging out with myself.  You think I’m joking?  We had to plan what we were wearing because left to our own devices, we would show up to everything wearing the exact same outfit.

We attended talks, workshops, and cruised booths for free stuff information!  We also ate Puyallup Fair Scores (legendary), and used every ounce of willpower we had to resist the gyros that smelled like angel tears and unicorn breath.

My sis, my aunt, and I listened to Will Allen talk about his work in the inner-cities of Wisconsin.  He turns vacant land in to mini farms and gives jobs to local kids.  His organization also “flower bombs” vacant lots and parking strips where there is a lot of crime.  They roll up, dump a ton of compost, plant flowers and gardens, and shortly thereafter, crime is reduced in those areas because residents are now outside more and that makes the drug dealers and car thieves conspicuous.  He has a TV show coming soon, but I didn’t hear when or what channel it would be on.  Hopefully I can get it on Hulu since we don’t have cable.

While listening to Will Allen, I looked over to the side and there was Bob, from Bob’s Red Mill!  He turned his back before I could get my phone camera out.  Bob is a bit of a hero of mine.  When we were dealing with Jack’s gluten and dairy issues, I knew I could always count of Bob’s stuff being high quality. 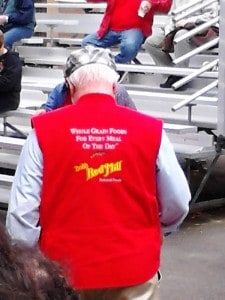 Then, we left the Will Allen talk, and who did I see standing in the hallway?  Ed Begley Jr.!  When we lived in LA, Ed’s show on cable (don’t remember the name or the channel) is what inspired me to “go green”!  For me, seeing Ed was like seeing the hippy Elvis.  I asked him for a photo, and he was SO patient while my sister, who apparently hasn’t operated a cell phone camera since 1999, took blurry photo after blurry photo.  I believe this was the fourth try, and he was beyond kind during the process. 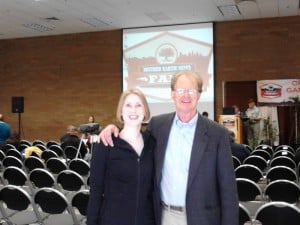 Also, the casting agents for Twilight called, and they want me as an extra for the next movie.  They said they usually have to put actors in the make up chair for six hours to make them look as pale as I am naturally.

I think one of the best “happy accidents” we had was stumbling on a canning talk by Sherri Brooks Vinton.  She was talking about preserving and was so funny and engaging that both my sis and I bought her book Put ‘Em Up and then had her sign them.  She was beyond hilarious and was kind enough to let me take a picture with her. 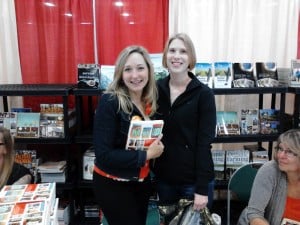 I told her I was a food blogger and she nodded to my sister and asked if we wrote the blog together.  I explained we were sisters, but later in the car it kind of hit me that I think she though we were life partners. HA!

Something I thought was super cool was that the Publisher and Editorial Director of Mother Earth News, Bryan Welch was walking around during the whole fair taking pictures and talking to people.  We were in a SUPER long book buying line, and he came up and was engaging people in conversation.  This little boy (I think his name was Simon) in front of us, gave Bryan a picture of some horses he had colored.  Bryan was wonderful and talked to the kid for about 5 minutes about the picture, and was so gracious in thanking him, etc.  It was pretty cool!

My only complaint about the fair was that almost all of the speakers were from the mid-west or the east coast.  I’m sure they were all fabulous and people learned a lot, but I know there are west coast (and Washington!) speakers who could have done a fabulous job with fewer air miles.  It seemed like they were outsourcing speakers when we have such a huge pool of local talent.

We also found out that if you bring a cell phone to turn in, you get a free ticket.  And if you volunteer for a one hour shift, you get a shirt and free admission.  I think we’ll sign up to volunteer next year because it seemed cool!