Our experience with cloth diapering

Today’s topic is inspired by a blog reader that I know through my friend Elaina. Jenny emailed me a few weeks ago with this question:

Hi there!  How’s it going up in the PNW?  It’s been raining more here than usual, feels like real weather in LA and I love it!

I thought you would be the best person to ask about cloth diapers since you are the only other brave soul to use them I know of.  People I work with are so negative and say things like “well that won’t last long,” or “it’s not realistic.”  I figure it wasn’t for them but for us I think it will work out fine.  I added gift cards to the site GroVia to my registry because I had read good things about them on a couple blogs and they have a “hybrid” system we thought about starting with since Brian isn’t as keen on cloth diaper washing right now.  I thought we could start with those and move toward real cloth diapers after he’s more comfortable using them.  Have you tried these hybrids?  Any recommendations or advice with this?  I would appreciate any advice you have.
I need to set three ground rules before starting this post, because it will be long. The three things I am so sick of hearing and will debunk are the following:
1) Cloth diapers? Gross, I don’t want to touch poop!
2) Cloth diapers? Gross. That will never last. Good luck (eyeroll and douchey smirk).
3) Cloth diapers? Gross. They are such a waste of water.
Even after having two kids in cloth diapers over the last (almost) eight years, I still hear those things. Nope, it will never last. You’re right. That’s why I am still totally doing it.

Let’s quickly talk diaper basics. I don’t claim to be a cloth diapering expert, but again, this isn’t my first fluffy butt rodeo and I think we have it down pretty well at this point. There are so many kinds of cloth diapers, and I’m sure tons more have been added since I did all the research before Jack was born. At the core of diapering “systems” you have:

Prefolds
These are the flat rectangle pieces of absorbent cloth that most people think about when they hear “cloth diapers”. They are the ones we wore as kids with safety pins and rubber pants. They haven’t changed that much in the years since I was doing some business in my own diaper, but the securing tabs are much better and you no longer need safety pins. For the covers, you can simply use a water resistant cover that looks basically like a diaper. You put the prefold on the kiddo, secure it with some tabs, and then put a cover over that. 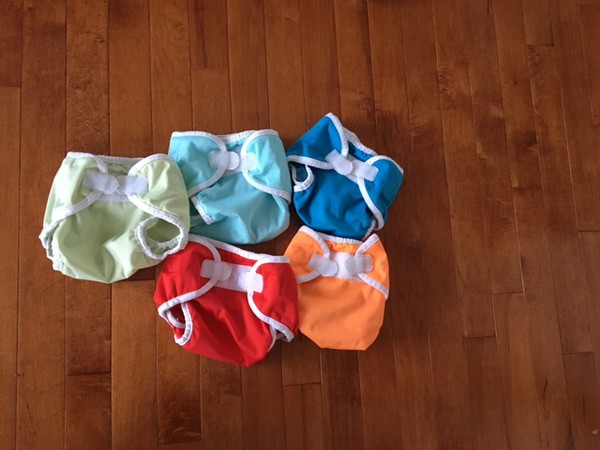 Prefolds were not for me, but they were a super cheap investment to find out that I didn’t like them. And with Jack’s GERD, we used them all day long for months on end as burp rags. I purchased Jack’s through Green Mountain Diapers, and they have held up well after all these years. Prefolds are the most economical option out there, and some people have great success with them.
Fitted Diapers
Fitted diapers look like a disposable diaper in that they have the securing tabs incorporated in to the diaper itself. It is an absorbent piece of material, but they are not water proof. You still need to put a cover over them. We used fitted diapers at the newborn stage, and they in turn have been worn by about six other babies in our lives over the years. We have lost one in all that time due to the condition it was returned to us. For covers, we used Thirsties and had good success. 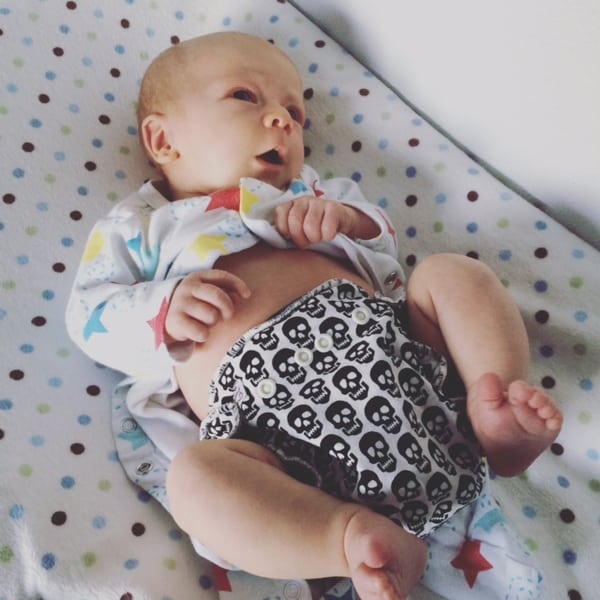 We also had some small and medium fitted diapers that were great to supplement our other pocket diapers (see below under pocket diapers) when the boys were still very little and by the end of the day we couldn’t figure out how we changed 13 diapers in 12 hours. 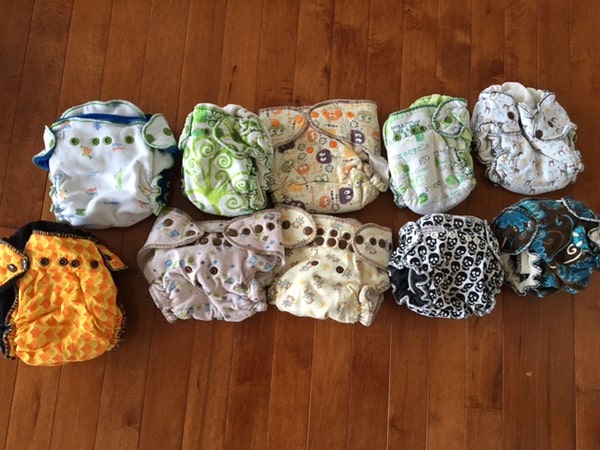 Fitted diapers usually aren’t that expensive, but they generally come in xs, small, medium, and large. That means once your child has grown out of one size, you need more diapers to fit your needs. Some fitteds have sizing that grows with your child.
Pocket Diapers
Pocket diapers seem to be the most popular type of cloth diapers used today. You have a water resistant cover with a soft piece of thin fleece on the inside. You stuff an absorbent insert (usually microfiber) in-between the cover and fleece. Moisture is wicked away from the baby’s skin and “stored” in the insert. One of the benefits of pocket diapers is that you can stuff in multiple inserts, thus making them more absorbent as needed. 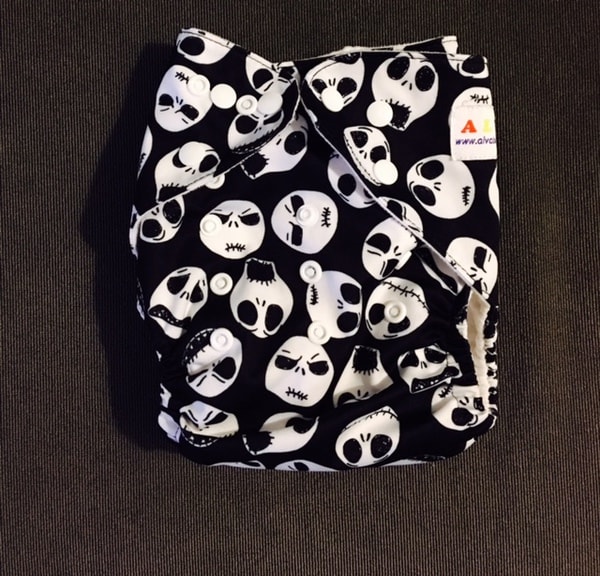 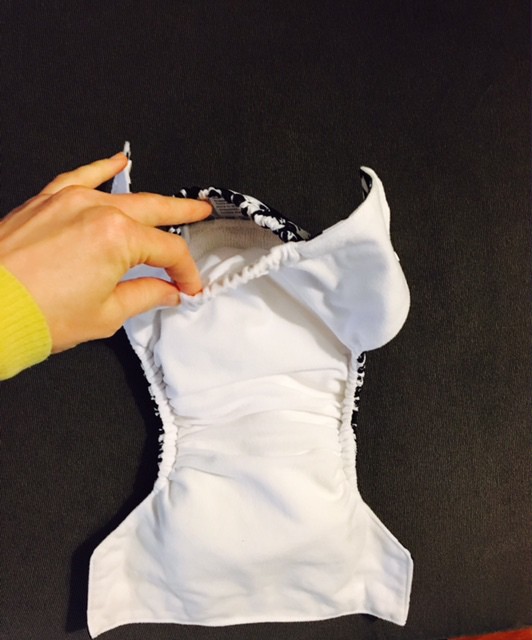 The options for securing pocket diapers are either a velcro system, or snaps. Velcro tends to wear out and needs to be replaced after a few years. They also get linty over time. I have always preferred snaps, but Troy is a velcro fan all the way.
Most pocket diapers will fit a baby from about 10 pounds and above. They have snaps down the front that allow you to adjust the size of the diaper as your baby grows and should last you through potty training.
Popular pocket diapers are Blueberry, Bum Genius, and I’m loving Alva Baby after they were recommended by a few blog readers on Facebook.
All-in-Ones (AIO)
AIO diapers are when the inserts are basically attached to a water resistant cover. You don’t need to remove the inserts for washing or stuff them after they’ve been cleaned. We have a few Bum Genius AIO from Jack, and they’ve held up well. I feel like the rise on them (how far they come up in the front) isn’t as high as other diapers, but they work fine. They are the thinnest fitting diaper we have, so they’re good when Bennett wants to feel slim and trim. 🙂 They make great diapers for the diaper bag because you don’t need to remove the insert before putting them in wet bag (more about wet bags below). 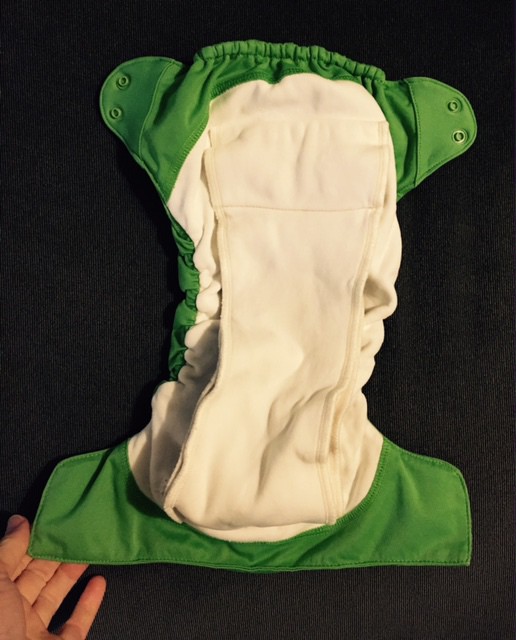 The reason I didn’t use more AIO diapers for our boys is that (at least back when I purchased them), they were more expensive than pocket diapers…and they take forever to dry. Forever. How long? F-O-R-E-V-E-R.
Like pocket diapers, most AIO diapers have adjustable snaps down the front to grow with your child.
Hybrid diapers
These I know the absolute least about. Poor Jenny, those are what she wanted to know about. From what I understand, they have a reusable cover, but either a flushable liner or a liner you throw away. There are many different systems out there, and I have heard mixed results, but for everyone who loves a product, there is always someone who doesn’t. It may be the best diaper for you! 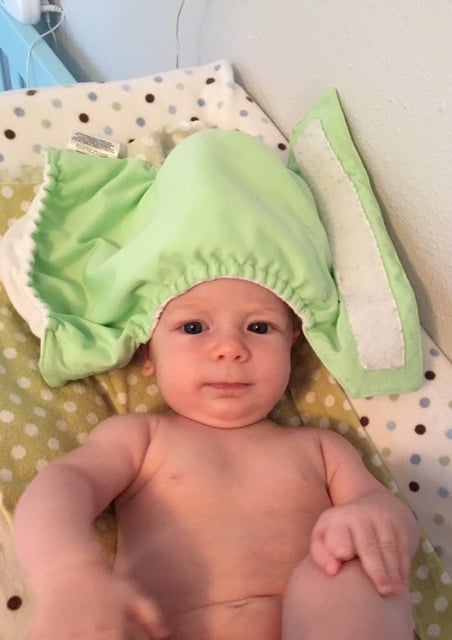 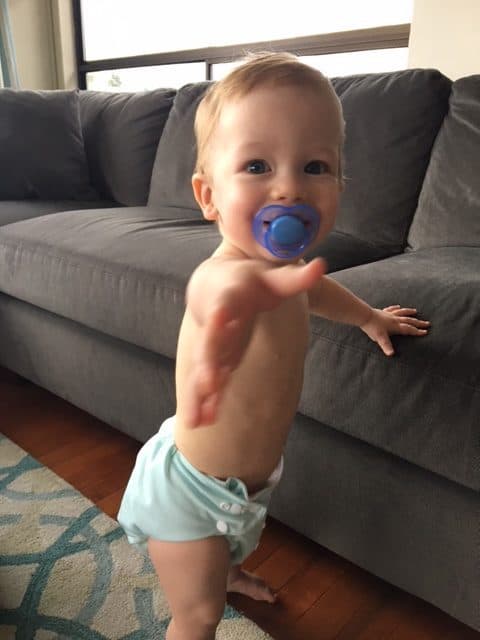 9 comments on “Our experience with cloth diapering”