I got off early from work last Friday because of a bunch of overtime I worked earlier in the week.  My plan was: get Jack from daycare, drop off the Take Five Bars at church for the bake sale, and then head to the fabric store so that Jack could pick out the back for his Christmas quilt.

So, with all that to do, inevitably he fell asleep in the backseat almost immediately.  We’re talking drool down the front of his shirt snoozin’.

We headed home, and I was annoyed that I didn’t get all the stuff done that I had planned.  He woke up when I got him out of the car, and I assumed he’d want to go play, or read a book.  Surprisingly, he kinda wanted to snuggle – a very rare occurrence with my busy boy – as I carried him up the stairs.

He was still snugly upstairs, so I sat down on the couch with him, and he continued to stay against me.  I laid down on the couch so that he could get comfortable, and I was amazed that within a minute, he was sleeping away on my chest.

The part of me suffering from a sinus infection said

Ohhh, I should close my eyes too, and take a snooze.
The part of me that can’t stay still and doesn’t understand how to not multi-task said
I wish my phone wasn’t in the car.  Then I could make a to do list or something on it.
The part of me that is always thinking about the blog said
Too bad there isn’t some paper and a pen nearby.  I could be writing up some posts!
The part of me that really hates to not be productive said
Can I reach that magazine with my toe without waking him?
The part of me that never gets to sit and relax said
Man, I wish the remote wasn’t 3 feet away.
The scheduling part of me said
I need to wake him up now or he’ll never fall asleep tonight.
The worrying part of me said
Man, this kid can snore.  I wish we didn’t have to wait another two weeks to get the results of his sleep study back.
The mom part of me said
All of you other parts, shut up and don’t wake my baby big boy.
It has been 11 months since he last fell asleep on me (Christmas Day).  My boy does not give away snuggles very cheaply, and it is rare for him to slow down long enough to even think about it.  How many more times over the next few years will I get a chance for this opportunity?  One?  Two?
I swear I just had this child last month, and yet here we are, with him closer to four than he is to three.  Life moves fast, and my child moves even faster.
So, I quieted the louder parts of me, and put my cheek against his soft little head.  I looked out at the water and rain, and saw boats enter and leave the marina.  We laid there until it got dark.  My baby boy and I. 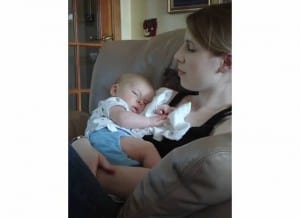