In 2005, I had just moved to Los Angeles, and was loving my job.  I was working for a fabulous company as an assistant to four managers.  I was also working full-time for the same company in another capacity as a recruiter.  I was filling in for someone who had left and was trying to get/keep the job because it was perfect for me.

I was stretched to the max.  I was working like 75 ish hours a week.

Then the office manager came to me and told me that a manager from another office was transferring to Los Angeles, and I was being assigned to her.

Because at that freaking moment, I needed more work to do.  Oh meerkats.

Turns out to be one of the best things to ever happen to me.

After a few months, I permanently transitioned from being an assistant to the recruiting person full-time.  They hired another assistant, and I handed off my managers and focused on my new role.

Even with all that new stuff, I was lucky to hang on to something from my “old” life.

Anne was that manager who transferred from another office. Transfered herself right in to my heart she did.

What a lucky girl I am to have this amazing person in my life.  We have been through some crazy stuff, and despite it all, she won’t quit me.  Laughter, tears, babies (her youngest son came early, and Jack was scheduled to be her birthday present), stress, and more laughter.  You know how you can wake up overwhelmed, and think of one good thing, and then everything is ok?  For me, that “one good thing” is usually my friendship with Anne.

She’s a good egg that lady.

She is also impossible to buy for, since she is such a great shopper she usually has anything she could possibly need.  This year, I tried my best to kick it up a notch.  My girl likes bright colors, and she claims she likes homemade stuff.  This year’s present had two goals: 1) show her how much I love her and value her friendship and 2) burn the ever loving crap out of her retinas. 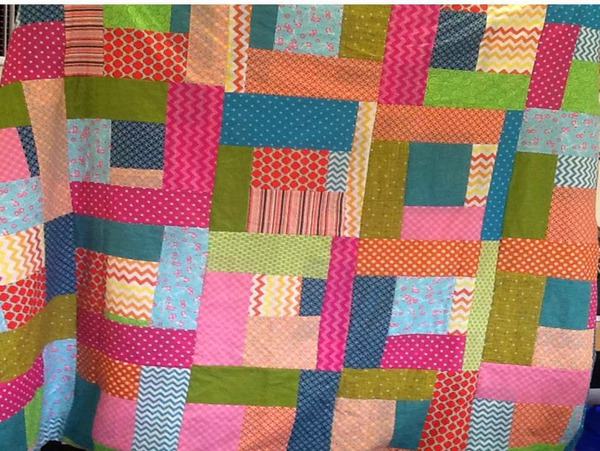 The quilt is based on Patchwork Style and is one of my favorites because it is so easy to customize, and your measurements don’t have to be exact (cause mine never are).

The quilt is one of the biggest I’ve ever done (that’s what she said), but I supposed after nine years of friendship, the hobag is worth it.

Happy birthday Anne, I love you.  You’re the best friend a girl could ever have in her life.  I love you more than I love my boobs pre-breastfeeding.

And that’s a whole lot.

PS, Anne’s actual birthday was Tuesday, but knowing that she REFUSES to open birthday presents when they arrive (hag), HATES having present surprises ruined, and had a busy day scheduled, I delayed posting the quilt until today.