I need to start by saying I recovered these chairs like seven months ago, but forgot I took photos of it until I was rummaging around in iphoto.  So that is why there are a few missing “steps” in the “tutorial”.

Our apartment in Los Angeles was so small that we didn’t really have a table to sit at for eating.  We had this tall pub table thing, but it was so tight in the kitchen that we just ate on the couch or outside.  When we moved back to Washington, my mother-in-law gave us their old dining room table that they had replaced a few years back.  The table had been her father’s, and used to be black but she painted it white.

Something you need to know about my mother-in-law, is that she LOVES bright colors.  She calls me “little Miss Earth Tones”, and I like to joke that going in to her basement with the bright walls and decorations, burns my retinas.  So it was no surprise when she later gave us the matching chairs for the table, that one of them looked like this: 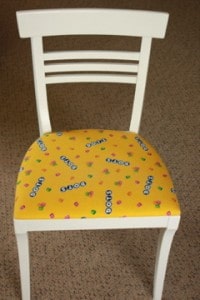 The others were in this grungy forest green material that needed some updating.  After months of looking around on Craigslist, garage sales, Target, etc., for new chairs, I had a light bulb moment of just replacing the fabric on the chairs we already had.  Armed with scissors, a staple gun, a screwdriver, and some encouraging words from my crafty friend Mary (“oh it’s not that hard.  ANYONE can recover a chair” which implies that if I couldn’t do this, I was an idiot),  I got to work.

1) I removed the old seat by the way of four screws in the chair.

2) I quickly realized that my mother-in-law must have had a staple gun fetish when covering these, because the seats were positively douched in staples.  It took me over an hour to remove the staples from all four chairs.  Removing the old fabric, revealed red pleather covers. 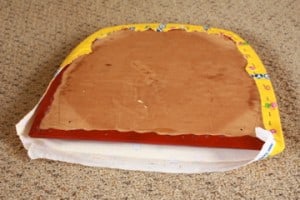 3) After removing the old cover, I laid it on top of my new fabric as a guide.  I’m not one for measuring, so I love being able to trace things. 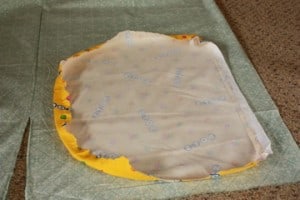 4) I cut out the new fabric, and laid it “right side up” down (i.e., the pretty side of the fabric was facing the ground), and put the seat on top of that. 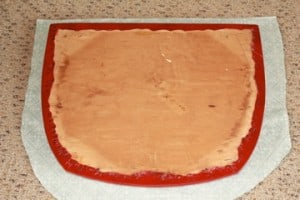 5) Here is where the photos kind of got lost.  I started by folding the fabric up and over the flat side of the chair, and with my knee in the middle of the seat, I stapled it down from end to end.

6) Then, like you’re wrapping a present (which I am HORRIBLE at by the way), fold one the sides over the cushion, creating a nice tight hold, start stapling your way around the whole cushion.  Keeping your knee on the cushion, and pulling tightly before stapling helps keep things tight and prevents ripples on the cushion.

7) Screw the now finished cushion back on the chair, and voila, you go from eye-searing to calming and “beachy”. 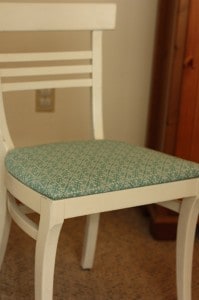 Total cost for this project: $7 in fabric.