I don’t believe the word vacation applies to actually relaxing if you have kids with you. We need to collectively come up with a new word to accurately describe what is really happening. Saying “being exhausted and annoyed in a different location” seems a bit wordy. 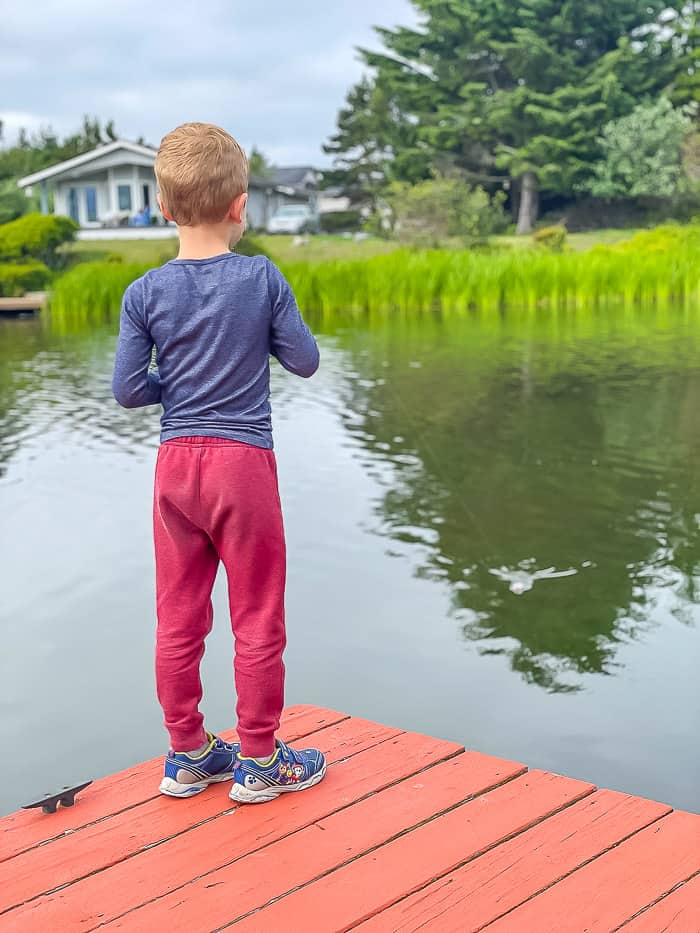 The first morning on vacation, I heard both boys scurrying around like mice at 5:15 am. They claimed they were starving, despite never ever attempting to eat this early at home. I was already awake because my brain is fundamentally broken.

When Jack was a baby, my friend who had a kid at the same time, told me about how she and her husband traded off getting up early with the baby on the weekend.

We tried that. For about three weeks. And quickly realized that only Troy was benefitting from this arrangement.

For one, I was the one with boobs to feed Jack. And two, once I am awake, I am awake. My body does not do the whole “roll over and go back to sleep” thing. It’s simply not a thing I can do.

I remember one Mother’s Day when I tried to stay in bed past 6 am. Little Jack, so unaccustomed to seeing Troy, and not me first thing in the morning asked Troy with panic in his voice, “is mom dead?”.

Since then, I basically have been on the morning shift. I usually wake up to work between 4:50 and 5:15 am. Both boys get up fairly early, but for my own sanity I do not allow them to start their day until 6:45 am.

If you give kids an inch, they’ll take a mile. If I let them get up early one day, they’ll ask to get up early EVERY day. And if I say yes one morning and then no another morning, I’ll get the whole “but that ONE time you let us get up early” fight and I’m not here for it. The 6:45 am “leave your room” rule is for me. Not them.

If Jack gets up early, he just reads in his room. We use this Ok to Wake clock for Bennett. It glows when he is allowed to leave his room. If he is awake before that (he usually is), he’ll color or read in his room. Occasionally I’ll hear him playing with his (stuffed) kitties in bed.

So, on the first day of vacation, I did let them get up early to have a small snack. Keeping two noisy AF kids quiet in a small house while Troy was still sleeping was not my favorite way to start the day or vacation.

As I was packing up the food on Tuesday so that we could leave for the ocean, one of the cooler bags fell off the counter. I didn’t think much of it and just kept packing. Welp. When we got to my in-law’s place, I opened up the cooler only to realize that bag had contained our carton of eggs.

Three had survived but sadly, the rest were a total loss. I texted a friend who also has chickens and told her I was going to have to buy eggs. From a store. Pfft. I cannot tell you the last time we needed to purchase eggs. My chickens are annoying, but they dutifully poop breakfast. 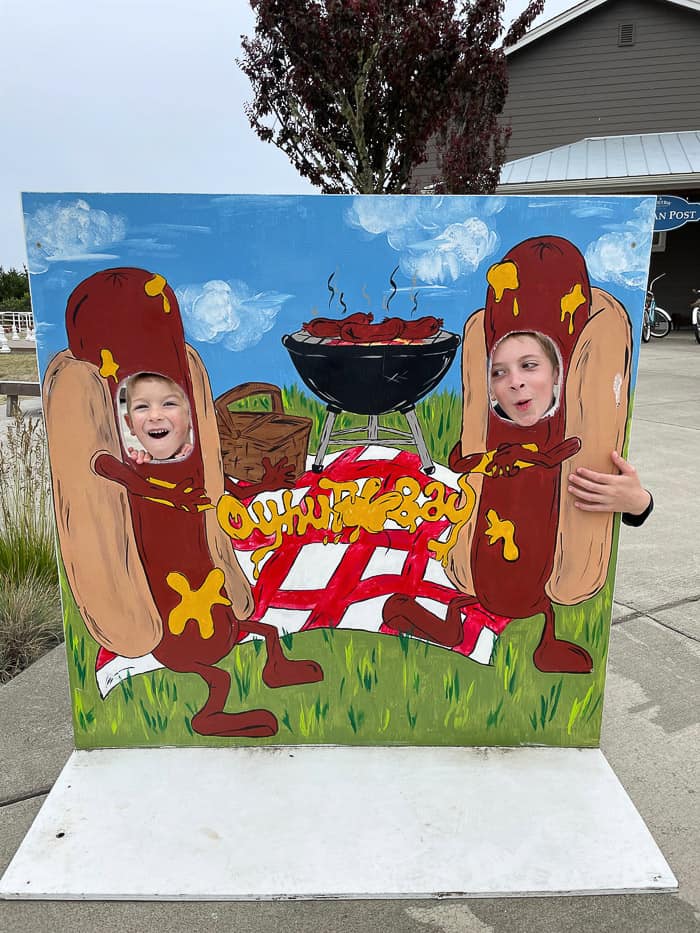 The weather back home became sweltering on Monday, and culminated with 100+ degree temps yesterday. This is pure banana pants for our area, especially this early in the summer. Normal temps right now are about 75-78 F. We typically get our two weeks of gross hot weather at the end of July. This week we broke records across the board for hottest regional temps.

Most people in our region don’t have ac, so 10+ days of temps over 85F gets pretty gross, especially for the older population. We choose to live here so we don’t sweat our faces off during the summer, but this year the weather had a different plan…and it was full-on Operation Boob Sweat.

The temps at the ocean were gloriously cool and the skies were overcast for hours and hours each day. My friend Kylie from Midwest Foodie just moved from the Midwest to Portland. On a hot day they trekked out to the ocean and I giggled when I saw her Instagram story about starting the drive for a fun beach day. I knew exactly where this was heading.

The next story was basically “why is it so cold and cloudy at the ocean” and I laughed and laughed. The Pacific Ocean is cold, wild, and not remotely “beachy” until you hit central California. This old TV ad from a PNW insurance company nails our beach days.

The heatwave is scary for our region, especially because the nighttime temps were too warm for a true cool down. It looks like it is finally going to break on Wednesday or Thursday of this week. If this is the indication of what summer is going to be like, you can have it. I’m a hard pass.

On the plus side, our ocean trip was nice, if not remotely restful. Because, kids. We took lots of bike rides, rode some go-karts, ate ice cream, eye snuggled the heck out of baby deer, and make and ate s’mores. 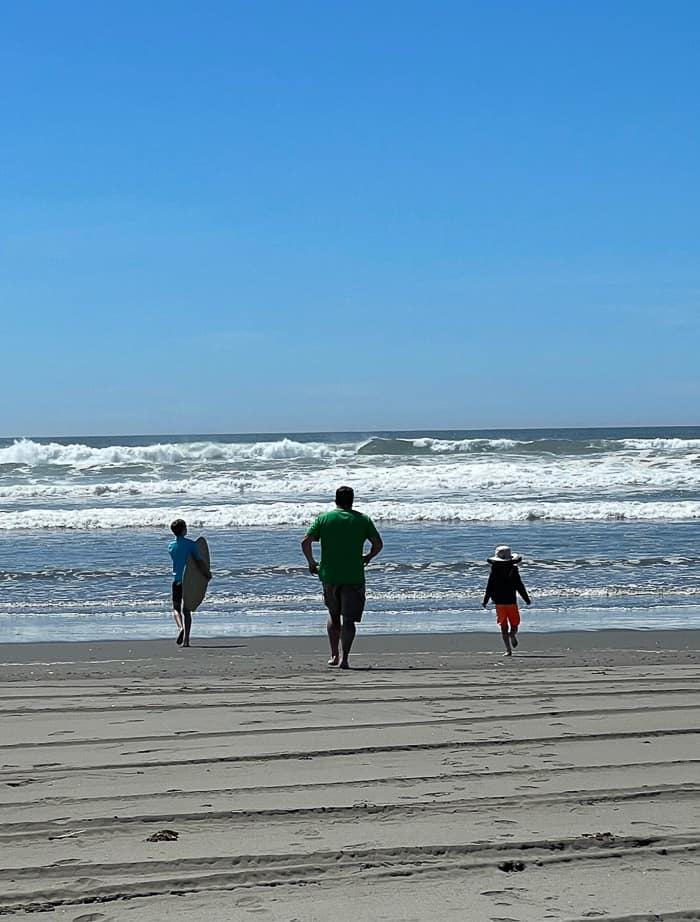 I hate them in the water SO MUCH

During the trip, both kids invented their own new game. Jack’s was called “Spike Ball” and it is a cross between pickleball and racquetball. He hits this spiky (squishy) plastic ball against the garage door with a pickleball racket and then you have to return it with your racket.

Bennett’s game was called “Battle Kitties”. I was assigned the rank of Sargent Snuggles, and Troy is Major Meowser. No one quite knows how to actually play, but it usually involves sneak attack hugs from Bennett. And I’m here for that.

On our first night there, Bennett was hard at work on a picture at the dinner table. He held it up to me and I started laughing. And laughing. And then I realized something was wrong because he began to cry.

My side of the story: I thought Bennett drew a picture of a momma deer farting in a baby deer’s face. Which is 100% on brand for Bennett. 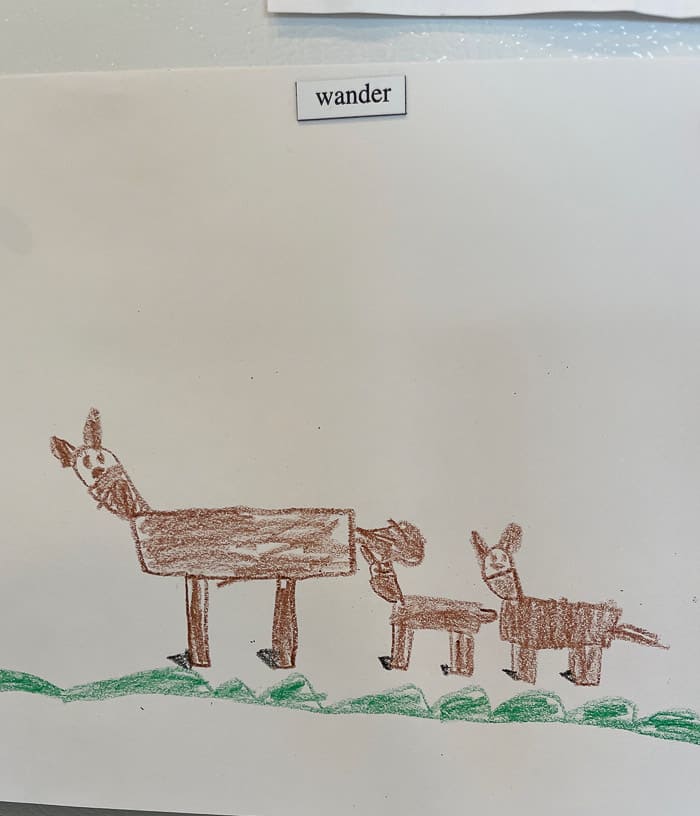 Bennett’s side of the story: He worked super hard on this photo and then like a jerk I laughed in his face over it.

I apologized and explained why I was laughing, but I think his feelings were still pretty hurt after that. I felt awful…but I mean, c’mon. You see it too, right? Right?

On the final night, we were there, I had a super restless sleep. My mouth hurt and I kept thinking I somehow had a sunburn on my mouth. I woke up Saturday morning to see that my bottom lip was twice the normal size! Either I was having an allergic reaction or someone gave me really horrible lip injections in my sleep. 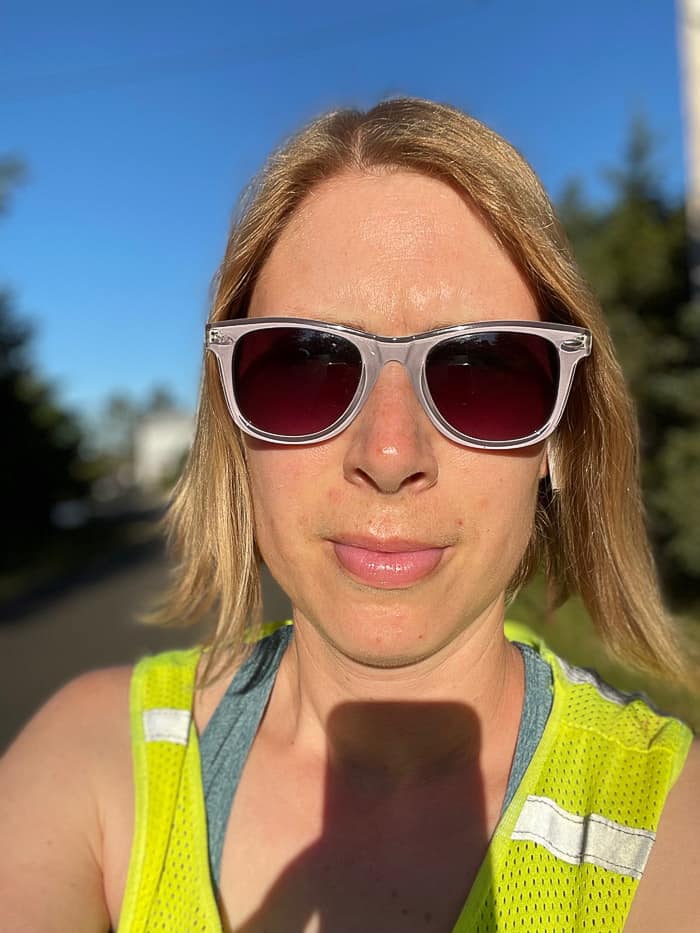 I realized years ago that I have a sensitivity to most conventional toothpaste. Within two days of using them, the tip of my tongue goes numb; it’s so weird.

The boys had a grand ole time and we’re headed back later in the summer as final hurrah before school starts. Having a free and lovely place to stay makes family getaways much easier. It’s a gift that I never take for granted.

In the Garden This Week

I can tell you that the garden LOVED the heat. We came back from four days away, and I swear everything pretty much grew ridiculously fast. Except for our red lettuce. That doubled in size and bolted in a hot minute.

We’re picking strawberries, raspberries, and blueberries on the daily. I should be better about picking the snow peas every single day, but they make themselves impossible to find. So rude.

Hard to believe it, but it’s almost time to start thinking about the fall garden. As soon as I get the garlic harvested (probably in another month or so if this weather holds up), I’ll be putting in carrots, beets, and more greens.

Typically, the end of summer is warmer for us, and summer temps can last into early October. Assuming we don’t get early rains to ruin the berries, we can be harvesting raspberries for another few months.

During our trip, my Figs scrubs pants were a constant wardrobe staple. I worked out in them, wore them around the house, rode bikes in them, cleaned, and chased after the kiddos. And yes, I washed them!

With SO MANY POCKETS, they are the best-ever universal pant. I first bought them because I couldn’t find any joggers that were long enough for me, and Figs come in short, regular, and longs. They are my absolute favorite around-the-house pants and you can get $20 off your first order here. 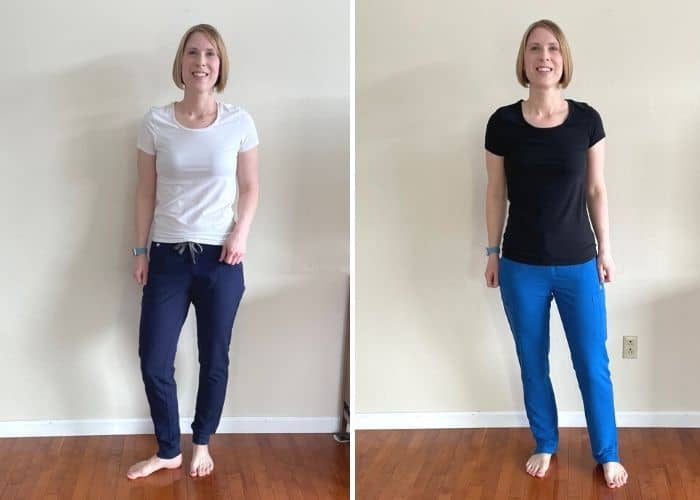 I started Troubled Blood this week, the fifth book in the Cormoran Strike series. I found the first book, Cuckoo’s Calling, years ago as an audiobook through the library and just loved it.

And yes, I know who the real author is. And yeah, she has been problematic of late. I’m not quite sure how to balance that with how much I love these characters and want to keep reading about them.

I did a lot of reading on the trip, but still only got through 58% of the book. Each book in this series is always SO long. I’m in it for the long haul, so I probably won’t be able to start anything new for a very long time.

Freaking delicious. Even my 14-year-old zucchini-hating child loved them. Seriously – so good. 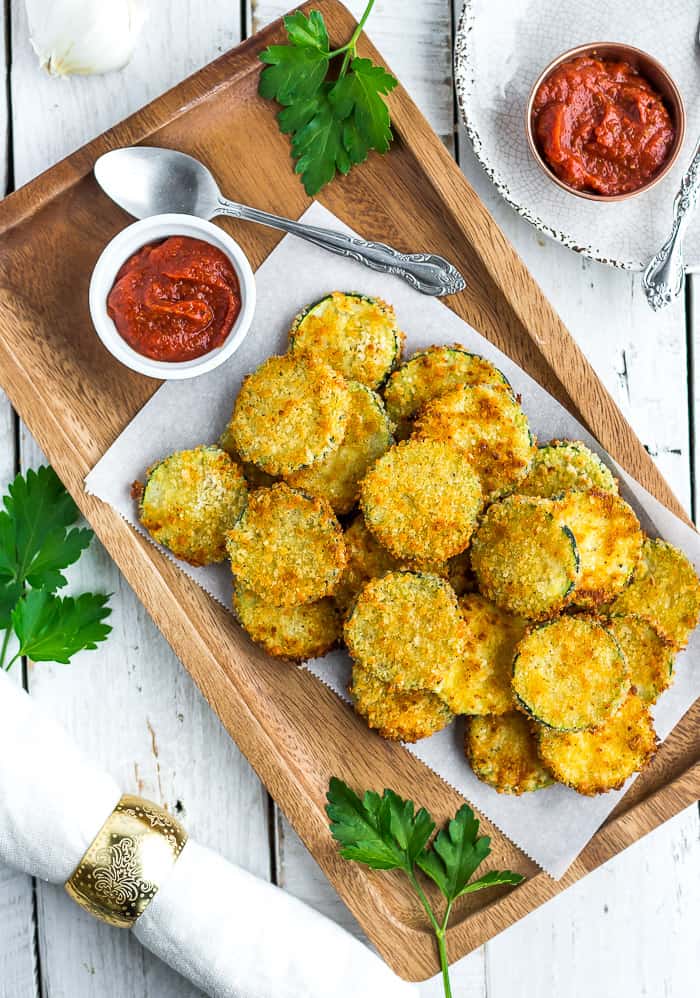 Air Fryer Calzones – These delicious Air Fryer Calzones come together in just a few minutes with a few simple ingredients. Perfect for fast dinners or snacks, they’re also easy enough for kids to make on their own. {Pin this recipe} 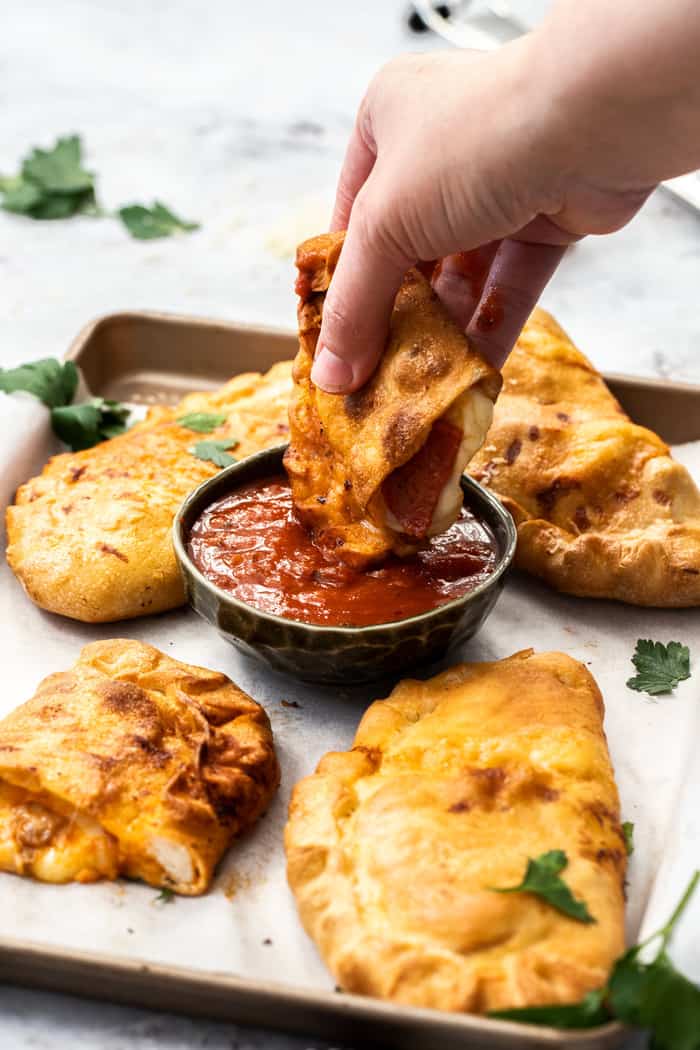 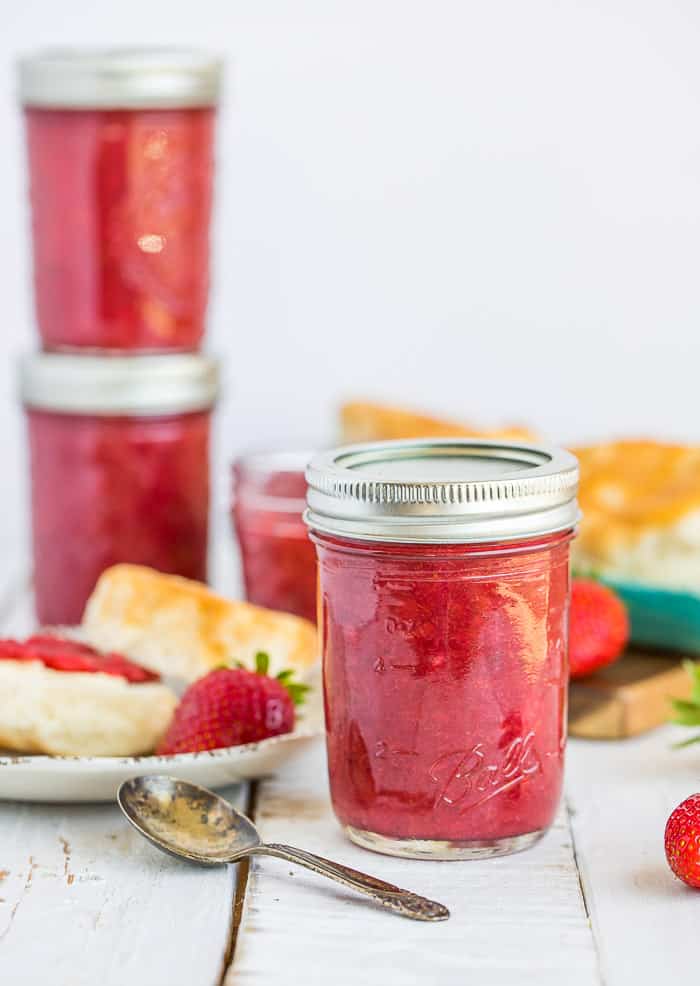 What to Eat, Can, and Preserve in Summer – Fresh produce in summer is abundant and incredible! You can’t go to the farmer’s market without being overwhelmed by the amazing options. Learn what to can, preserve, and eat in summer, as well as delicious recipes for seasonal produce. {Pin this list} 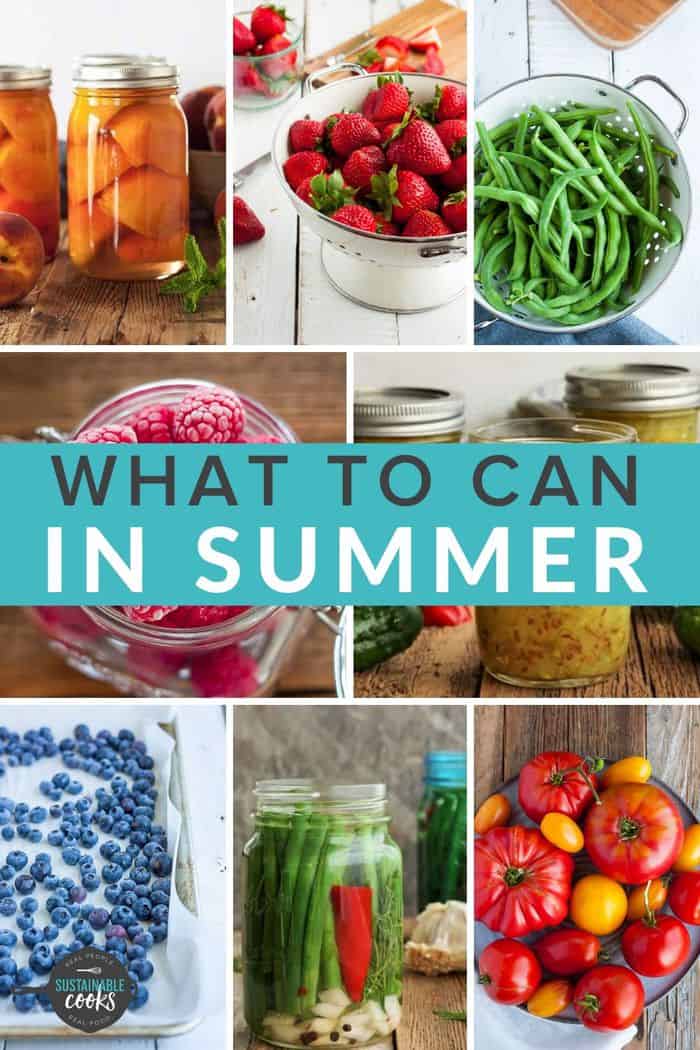 Monday:: It’s going to be hot as balls tomorrow and honestly, I don’t want to make or eat anything. My kids would be thrilled if I declared it an ice cream for dinner situation. Instead, we’ll do chef’s salads and stovetop garlic bread.

Tuesday:: Troy wants to try pizza on the BBQ. We’ll use my whole wheat dough recipe and some of our homemade pizza sauce that I have in the freezer.

Wednesday:: Korean BBQ chicken in the Instant Pot with some Garlic Butter Rice and stir-fried snow peas from the garden (if any survive the heat between now and then).

Saturday:: We’re having non-family over for dinner for the first time in 16 months! Troy is making his famous burgers, we’ll also have some grilled veggies, and fruit.

Sunday:: TBD. We’re not doing the giant BBQ at my inlaw’s again this year. So honestly, we’ll probably have leftovers or grill something.

posted on June 27, 2021
25 Comments//Leave a Comment »
Categories: Meal Plan, Scattered Sundays
« Previous PostWhat to Can, Preserve, and Eat in Summer
Next Post » Confessions