Last Sunday we hit up a pumpkin patch with some friends. I mean, I guess there were pumpkins, but right away we found a baby goat and pretty much stayed there for most of the visit. I’m pretty sure we would have fed it grass until it popped.

One of the families had asked if I would take a few photos of them during the visit. I let them know I would be happy to, but since I only work with food, they needed to stop me if I began to sprinkle parsley on them. 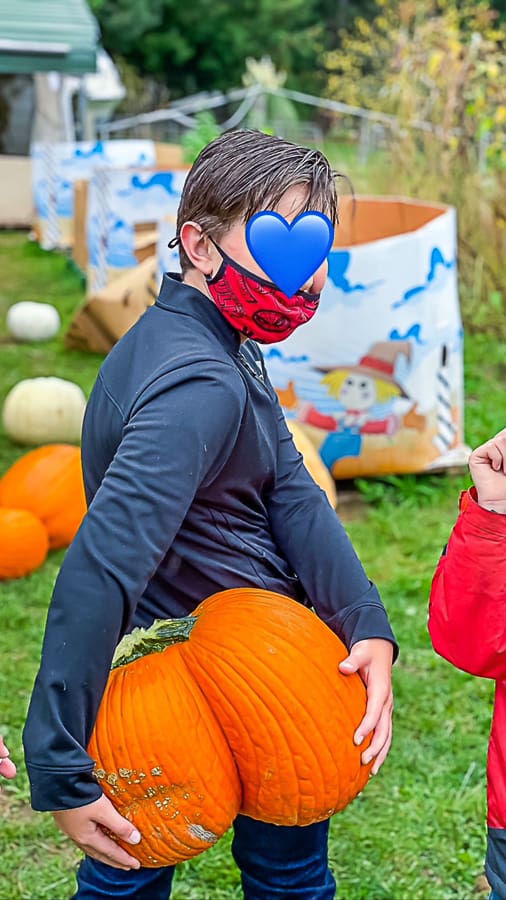 Jack had track championships this week and it was a lot of fun, but also a very long afternoon/evening. Of the 16 kids in his event, only three were 7th graders – the rest were in 8th grade.

Some of those 8th graders look like grown men. I think a few of them drove themselves to the meet, are registered to vote, and recently got drafted into the Army. Jack said the kid who took first in his heat had a full-grown mustache. Ha!

Going into the race, he had ranked 13 out of 16 based on PRs (personal records) from previous race times. So, we had gently been setting his expectations for the week leading up to the meet. Reminding him almost all the kids were older, had been doing this longer, and had faster times. We kept reinforcing the experience of it, and how it will set him up to be really prepared for next year.

They ran two heats based on previous times, and Jack was in the second heat.  Well, he came in second in his heat! I was losing my damn mind. Seriously. I sent the video I took to a few friends and they said they had no idea that the voice on the video belonged to me.

Right after the heat ended, they went to the next event so we never got to see the overall scores or placements. I had to look them up the next day on a very antiquated website that the middle schools use. It’s almost impossible to read, but it looks like he got 9th overall. I was so impressed with his progress, and he is excited for next year! And right now, I’m excited that track is over. 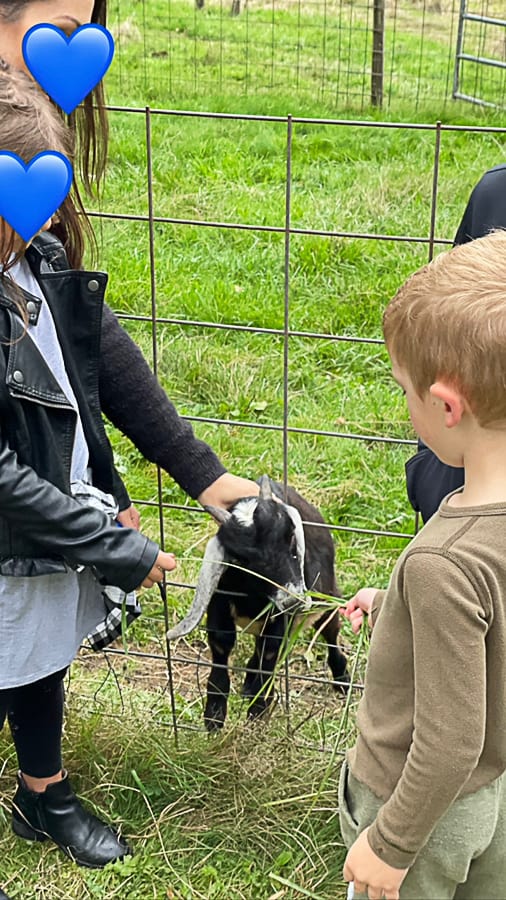 We were giving that baby goat 1 billion ear scratches; I promise we were NOT holding her by the neck!

Good news on my foot! I got the x-ray back on Monday and there was no fracture seen. Yahoo! That being said, it did note that I had “mild arthritis” in my (insert looooooong medical term here that I had to google) big toe.

It’s a true testament to the quality shoes I insist on wearing that I had no idea anything was up with my toe. My family has always had a grip of foot problems, so, from the start, I have been willing to invest in good shoes for my hooves.

My foot had started feeling better last Sunday, but I decided to wait until the x-ray was back before getting back into the swing of things for walking/exercising. On Monday afternoon, I took a 1.5-mile baby walk and it was fine.

I tried another 1.5-mile walk on Tuesday and took a 3.25-mile walk on Wednesday. Then on Thursday, I accidentally took a wrong turn on my normal route and ended up doing 4.6 miles instead of my planned 4.

So far, so good and I feel like I’m basically back to 100%. I’m going to keep up normal activity at the start of this coming week and I might attempt a short 1-2 mile run on Thursday or Friday to really test the waters.

Also in the good news category, my mammogram results came back and those were all good too. It was a smashing success…

Every doctor/specialist seems to have different recommendations for how often you’re supposed to repeat that test. It appears that our local center recommends yearly, so that is what I’m going to do! 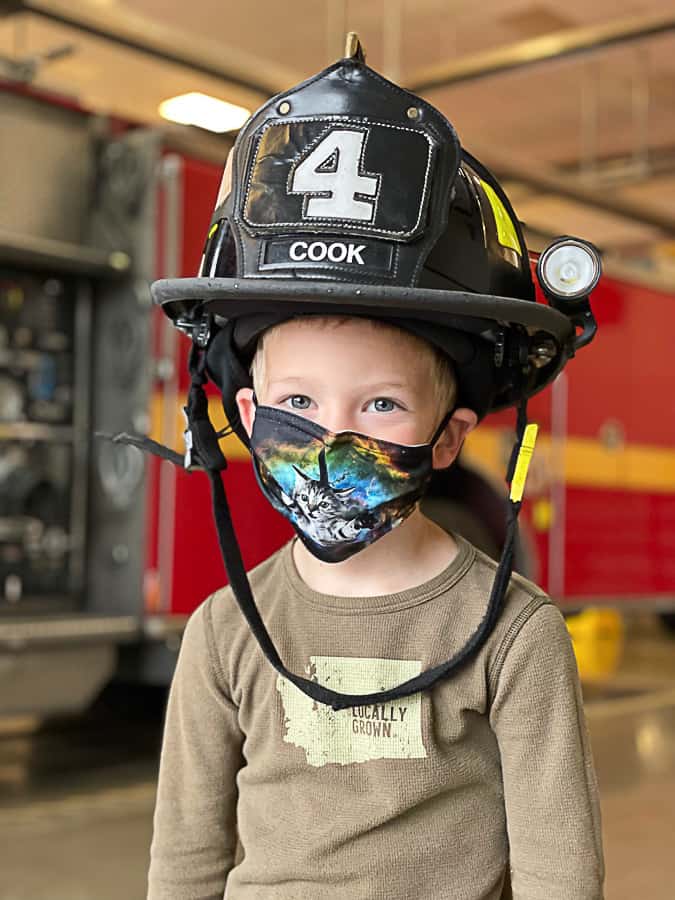 My little soccer team (aka the drunk cats with laser pointers) officially has the yips. They basically gave up a few weeks ago and have not recovered. It’s super frustrating to see and at one point last weekend, I was kneeling down, hugging all five kids on the field because two of them were sobbing.

Why were they sobbing? Well, for one thing, we were getting stomped on. And also, the other team told my team that they were “poop”. Truly brutal fighting words for the kindergarten set.

Our offense has been mostly fine, but defensively it has been so rough lately. I came up with a new game/drill for practice this week. What did I do? I engaged the kids at their level…I turned soccer into a game of Minecraft. 🙂

Now, I don’t have great Minecraft knowledge, and a few of the kids told me that I wasn’t being accurate, but whatever…you kids can’t tie your own cleats. I told them all they were villagers, and the goal they were defending was the village. It was up to them to protect the village from the creepers. Nothing is funnier/more concerning than 5 and 6-year-old boys yelling “attack the creepers” as they run onto the field.

Each time they subbed in/out during the game yesterday, I told them I was upgrading their armor and attack modes. Listen, I was totally making stuff up, but I did remember to say words like “iron ore” and “diamond sword”. And it worked!

They played their little hearts out and had a comeback and ended up winning a game. I think it will go a lot way to boost their little egos. Until a bunny hops on the field or a plane flies overhead and completely distracts them again. 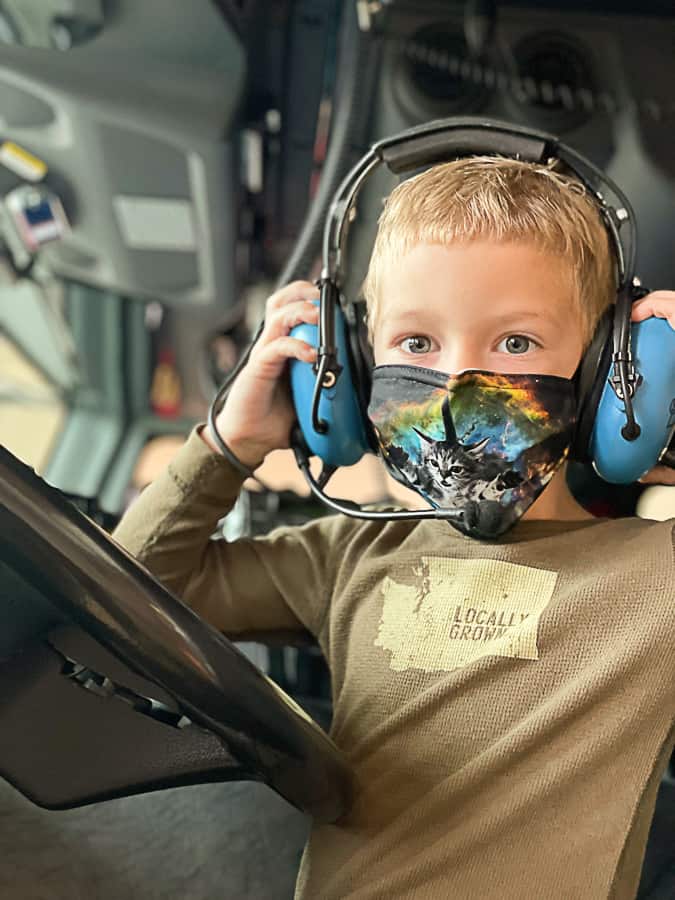 With Covid restrictions in place, the boys and I haven’t been able to visit Troy at the firehouse in over 18 months. We were finally able to go and see him this week, and Bennett the Firecat is officially on the job. He’s ready to go fight fires right meow. PS, his shift would have a 100% mortality rate. That kid is SLOW.

Are you signed up for my email list? Readers on my email list get exclusive content sent (almost) weekly! It’s easy to sign up, we keep it fun, and it’s not remotely spammy. You can sign up here and start getting awesomesauce sent to your inbox.

Years ago I recommended the podcast The Dropout, the story of how Elizabeth Holmes defrauded the world with her company Theranos. Well, it’s back for an updated season as it covers her trial week by week. It’s been fascinating to listen to the details and it is still banana pants to me that she was allowed to lie to really smart people for so long.

I finished Fates and Furies. I think I preferred the first half of the book to the second, but it’s done. As another reader said, “While I can’t say I *liked* it, I did think it was different and interesting”. This, exactly. The writing reminded me a bit of A Gay and Melancholy Sound, which was another super depressing book with interesting writing.

At the recommendation of a friend, I picked up The House in the Cerulean Sea from the library. It’s quirky and reminds me a bit of Harry Potter, a little James and Giant Peach (for a reason I cannot explain), and a few other books that I can’t exactly pinpoint. Either way, it is enjoyable so far!

I made this in the crockpot. It was delicious and full of flavor. Excellent. 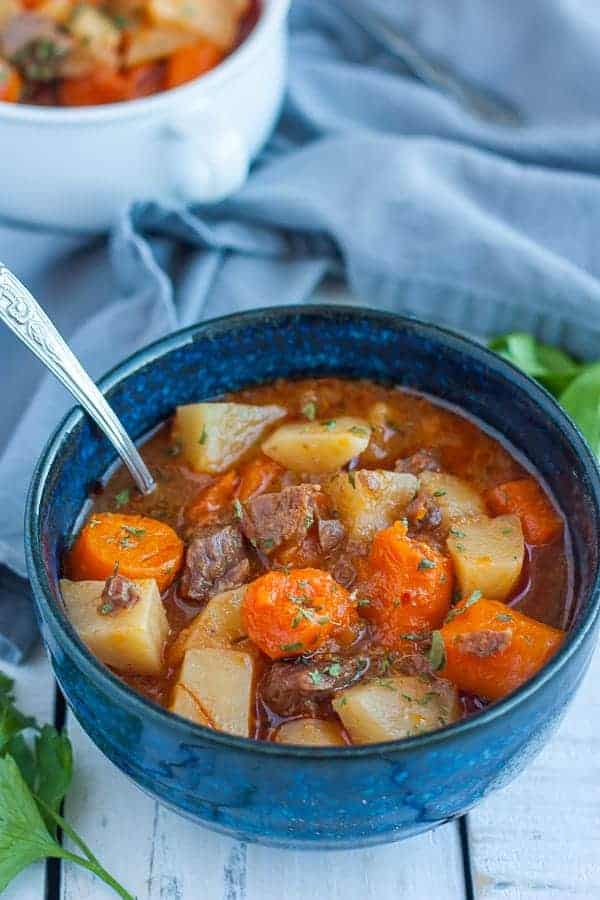 Air Fryer Salmon Cakes – These delicious Air Fryer Salmon Patties have a crispy outside with flaky, perfectly cooked salmon inside and are packed with flavor. They can easily be made gluten-free, and are a tasty freezer-friendly make-ahead weeknight dinner. {Pin this recipe} 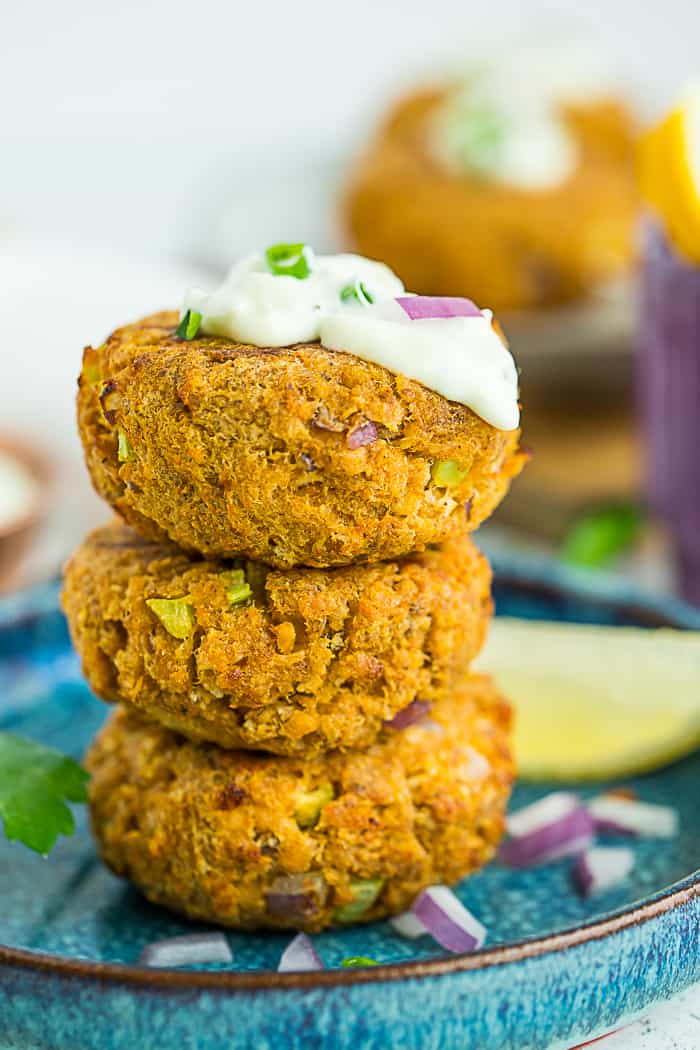 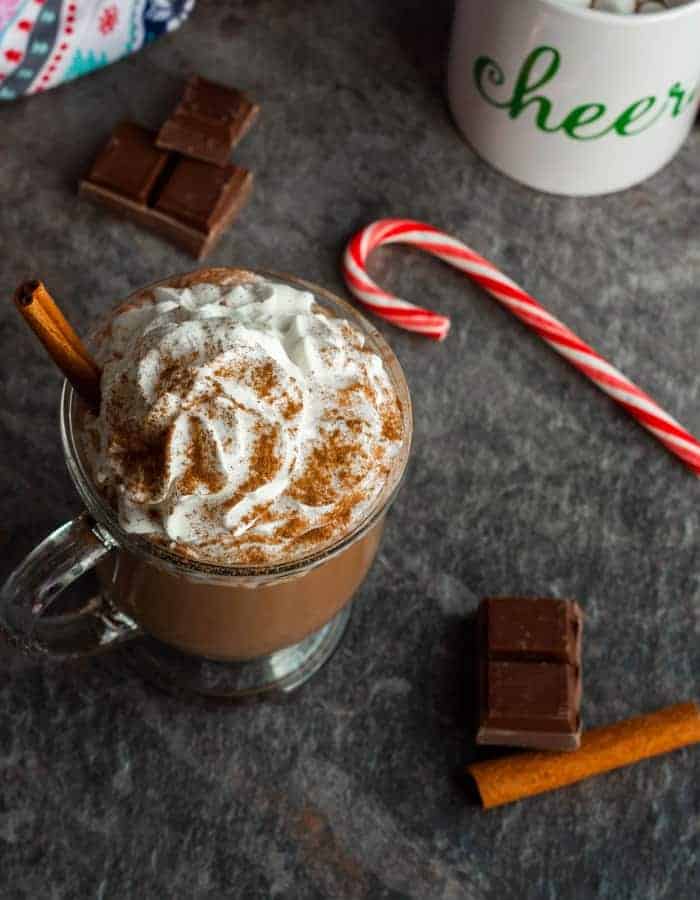 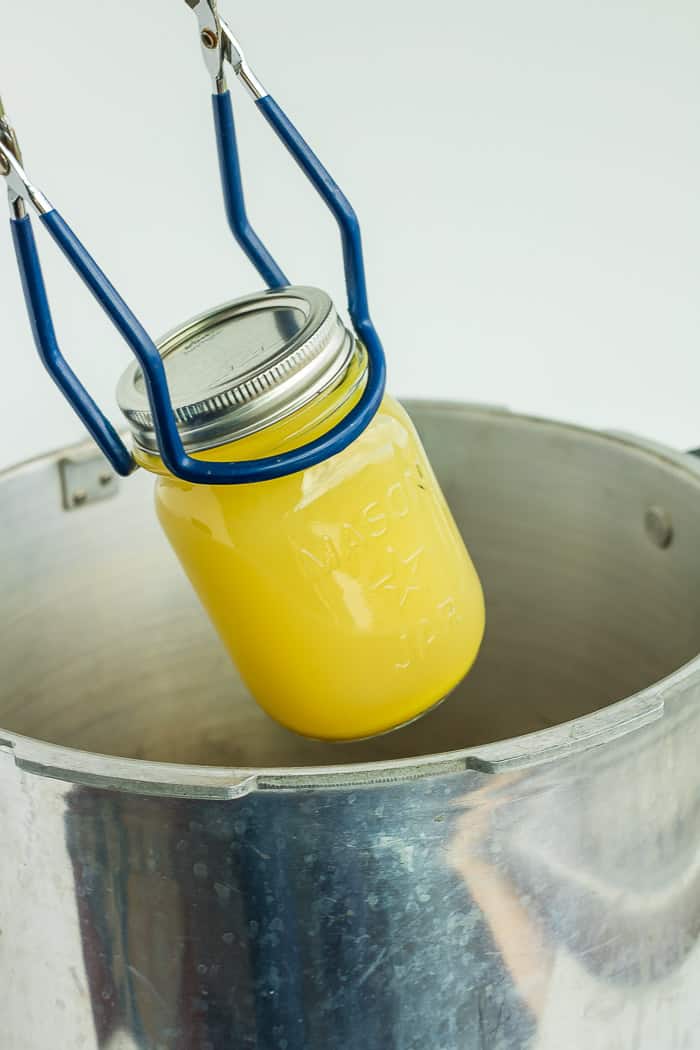 Tuesday:: Instant Pot Chicken Gnocchi Soup, stovetop garlic bread, and salad. This will use the last of my prepped freezer packs of soup veggies. Time to make some more soon!

Friday:: Organic hot dogs in the air fryer, organic tots, and veggies. For the hot dogs and tots, we really like the Simple Truth brand which is the generic organic brand that our grocery store offers. Good price and tasty!

Sunday:: It’s Halloween and our Halloween tradition has been homemade pizza (100% Whole Wheat Dough and Sugar-Free Pizza Sauce) and veggies before we head out on a candy hunt.