The day I have dreaded for the last nine months is here – school is out for the summer! 🙁

Day one we hit up a park with three of their cousins and found a banana slug. So pretty much living our best lives. 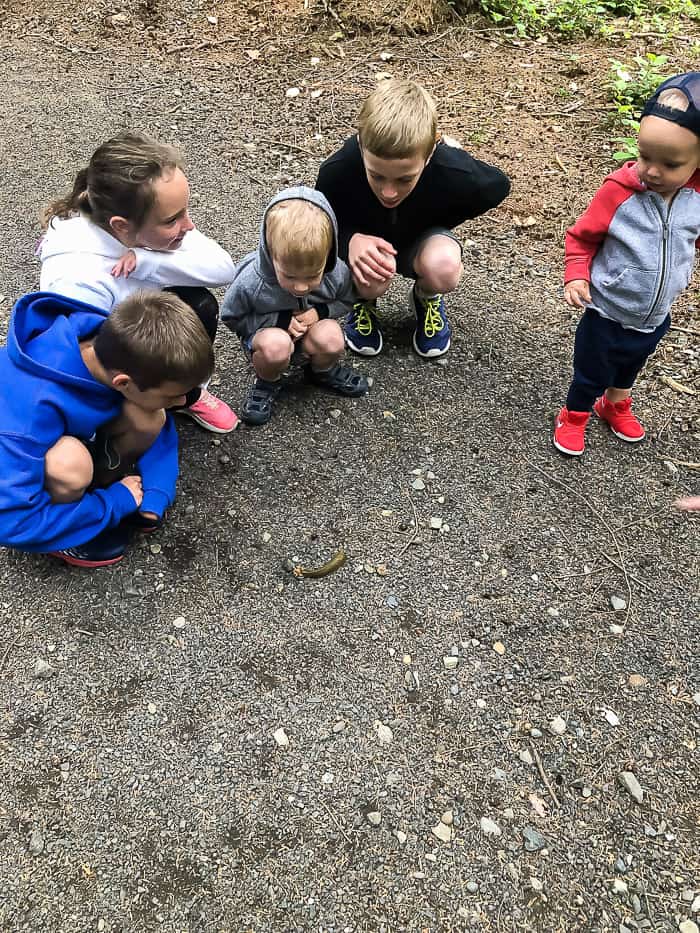 If you work from home and have kids, you’ll know the pain, frustration, and lack of patience that awaits me over the next nine(ish) weeks. My butthole is permanently puckered at this point and for the near future. Maybe I should start a walnut cracking business.

Jack is doing two week-long day camps this summer, and Bennett will be in one more preschool camp (so far. hopefully there are more).  And we’re going to Canada in July to see my blog wife Katie and her family!

The rest will just be pure survival mode I think.

Last week I alluded to something big happening, and now I’m excited to finally share it with you!

Troy and I FINALLY sold our property!

We bought almost three acres back in 2007 at the very tippy top of the market. We were still living in Los Angeles at the time and purchased this property with the idea that we would come home and build a forever home there.

What is it that they say about best-laid plans?

The economy tanked when we moved back to Seattle in 2008. The company I worked remotely for told me they were eliminating the work from home option two months after we moved. Then Troy couldn’t find a job and once he did the industry was so bad he was laid off three times in less than two years.

And then he decided to become a firefighter which was a four-year journey that was so incredibly expensive in terms of finances and emotional capital.

The property was amazing – next to a lake, it had a salmon stream on it, ATV trails, and just gorgeous green belts. But eventually, it became this thing that was a symbol of a direction our life was no longer headed. And we have been trying to unload it ever since.

As I said, we bought at the top of the market and put a ton of money down when we purchased it. Between the down payment and the monthly payments since then, there is no price we could have sold it for that would recoup that.

We tried to sell it through various agents for years but there were no buyers. Finally, early this spring I left a note on the next door neighbor’s home telling them we were going to relist it in April and if they wanted it we would sell it for $5k less if they wanted to do a for sale by owner situation.

You could imagine my surprise when they emailed within a day and said they were interested! As these things do, the process took so much longer than expected, but we closed this week at last.

We lost our shirts on this sale, but sometimes, the most important thing is closing the door to a chapter that is just dragging you down. Onward and forward at this point. 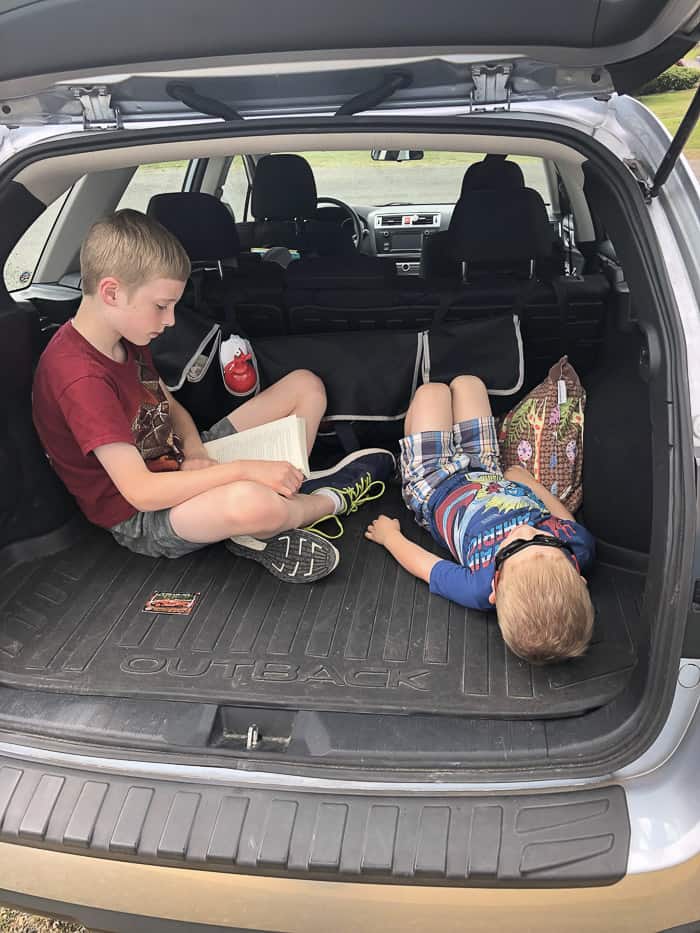 Packing a fire extinguisher and blanket like the good firefighter wife that I am.

With two road trips coming up this summer, I finally buckled down and bought things I swore I would never purchase. Seat organizers with screen holders. If we were sitting next to each other right now, you could palpably feel shame emanating from my body.

We have a very old family ipad that I actually won from my old job for doing the most edits on a company-wide document (yes, I’m a giant nerd) and a six-year-old Amazon Fire (can you believe they used to be $250??) that I bought when Jack had his tonsils taken out.

And with Bennett’s current level of assholeness (it’s off the charts, because #3yearoldsareevil), I think I’m just going to be ok with some screen time in the car. Jack will read books and Bennett is fine too and we got him this no-mess coloring tablet, but the screens are there to prevent me from choking them both out.

Felix, our UPS guy dropped off a box this week that I don’t remember ordering. Apparently, when I was researching this Zero Waste Food Storage post, I put different items in my cart so I could remember to include them in the post.

And during that process, I somehow left these Mod Family silicone lids in my cart and accidentally bought them. Oh well, they’re amazing! I used them on Friday for making communion bread, AKA No Knead Bread. 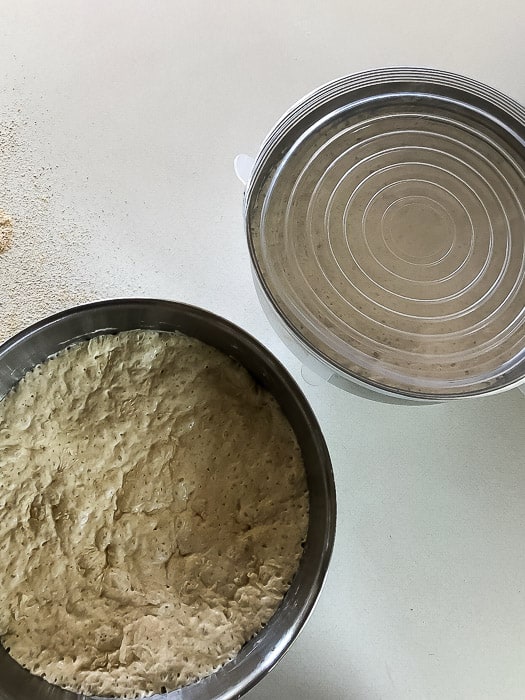 The pantry and freezer challenge is officially on, but it’s not too late to join! We started this morning and it will run through the 29th. Rules are your own to make, and the only goal is really to help you get creative with using up what you have already.

My shameful secret this spring is that I just could not give two craps about the garden. I know!! I’m in a season of business growth and am not interested or motivated by tomatoes.

I finally got tomatoes planted this week, but instead of my normal 18-25 plants, I did 12. I’m not planning on canning (related: Canning Whole Tomatoes) too much this summer and that’s ok. We all have seasons in our lives and this season is just going to be a little less produce-centered for me.

Thankfully, I did have some help with getting the compost spread in the planting areas. And yes, it took 15,917% longer with his “help”. 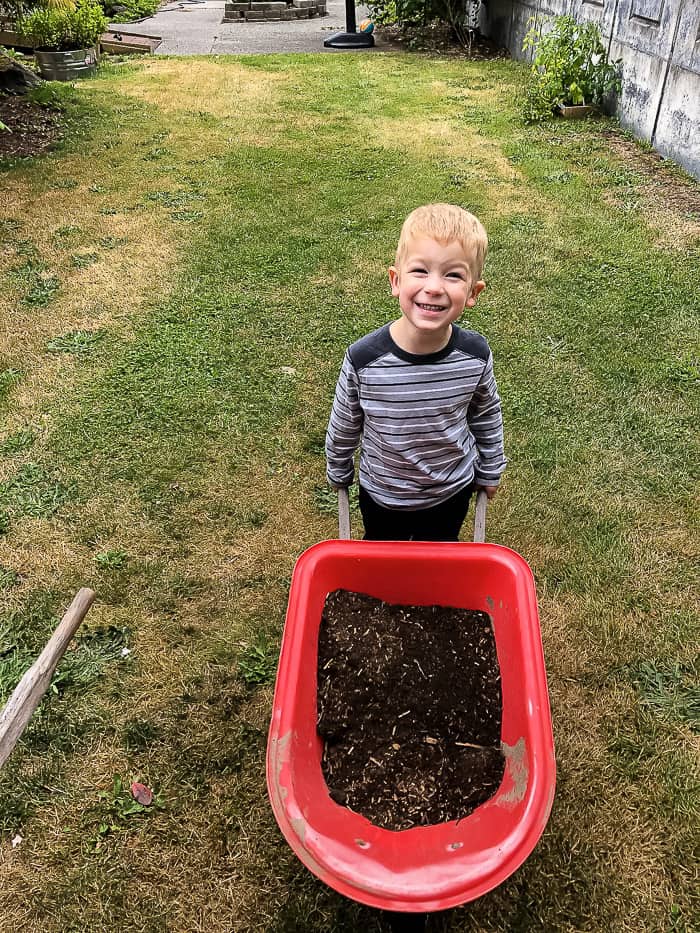 I told both boys last week that once school was out, they were on their own for making their breakfasts. During the school year, we have my nephew before and after school and he eats breakfast at my house. He takes a medication where he never feels hungry, and thus his breakfast needs are different than my kiddos.

I can’t make him a special breakfast and then tell the boys they have to eat something else. And thus, school = me making three separate breakfasts. And swearing under my breath.

But summer breakfasts are all on them! Bennett and I made some Fluffy Whole Wheat Pancakes this week to freeze, and he was pretty pleased with himself for heating his own breakfast up. We also made smoothies to go with his pancake. 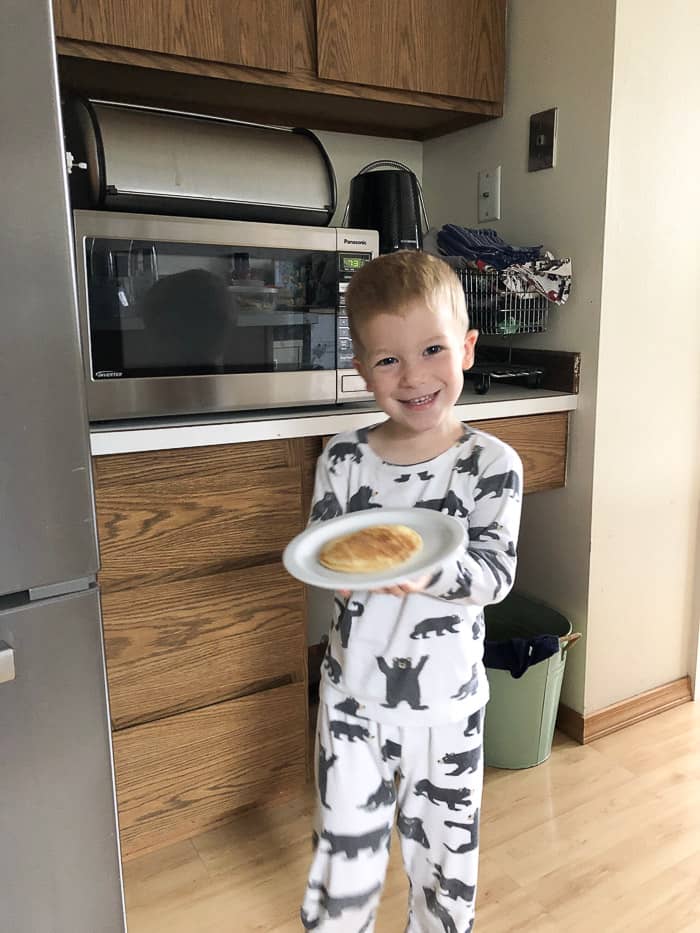 There is always some cooked bacon (related: How to Bake Bacon in the Oven) or sausage (related: Whole30 Breakfast Sausage), and precooked scrambled eggs (related: Make Ahead Scrambled Eggs). Bennett asks me how long to microwave it, so we’re going to go ahead and call it a math lesson too.

Troy had training at work today for dealing with patients with mental health issues who are in crisis mode. All the signals that someone is escalating and the tactics for handling it are all the things that every three-year-old I know does. 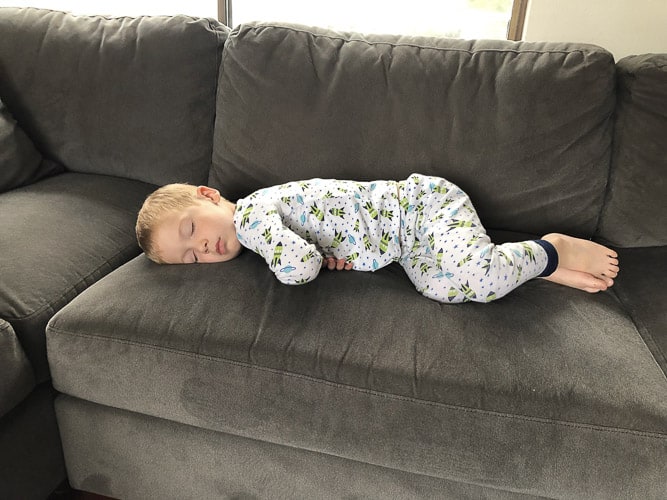 Screamed in his sleep all night, woke up at 5, and passed out 30 minutes before I had to take the big boys to school. NEAT

NERD ALERT! This week I’m listening to Inside Star Wars. This is another great podcast from Wondery (they also did Over My Dead Body and Gladiator)!

Honestly, I don’t love how they tell the story of how Star Wars came about, but the story itself is so interesting that I’m loving this. Apparently, they also have an Inside Jaws podcast that I might check out.

Troy worked in TV and film for almost 10 years, so hearing the behind the scenes stories from major productions is just fascinating. 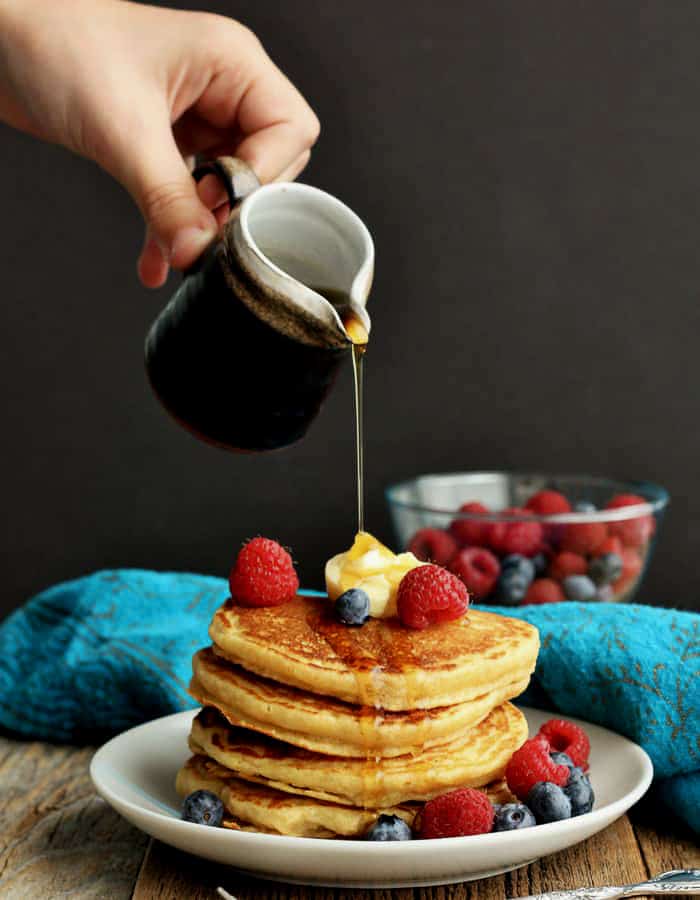 Being a person who’s never been a fan of pancakes, I gave these a try in hopes of feeding the rest of my family a heartier pancake. Because I am also not a fan of cooking more than one meal at a time, I gave these a try as well. I’m not kidding when I say these are in a regular rotation of breakfast for dinner at our house, AND my teenage son requests them for breakfast! I actually prefer them with “fake buttermilk” (milk+vinegar) rather than actual buttermilk. That’s a great thing considering I very rarely have buttermilk on hand. I love making these pancakes “extra” by adding blueberries (frozen ones work great if you don’t have fresh!). These are definitely a fave at our house!

If you follow us on Instagram, you’ll see that Bennett and I actually made a batch of these pancakes on Instagram live. And Bennett very sagely informed everyone that eggs come from “chicken’s butts”.

If you don’t like/care about jam recipes, the next few weeks are going to be very disappointing for you. I published a jam recipe this week AND have two more coming up in the next two weeks. GET READY! 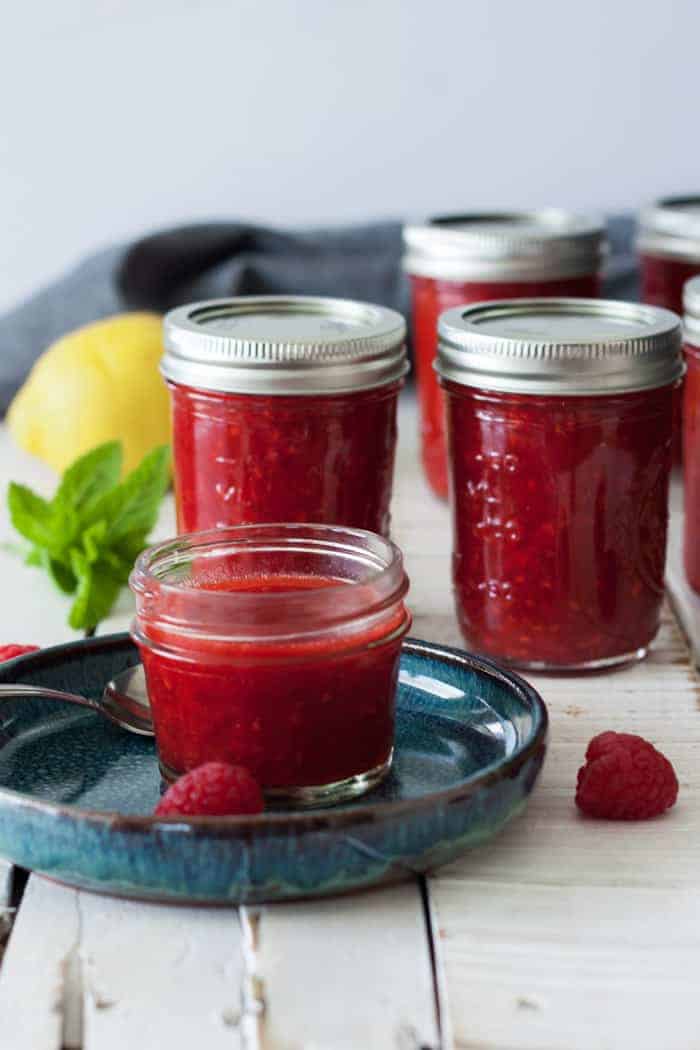 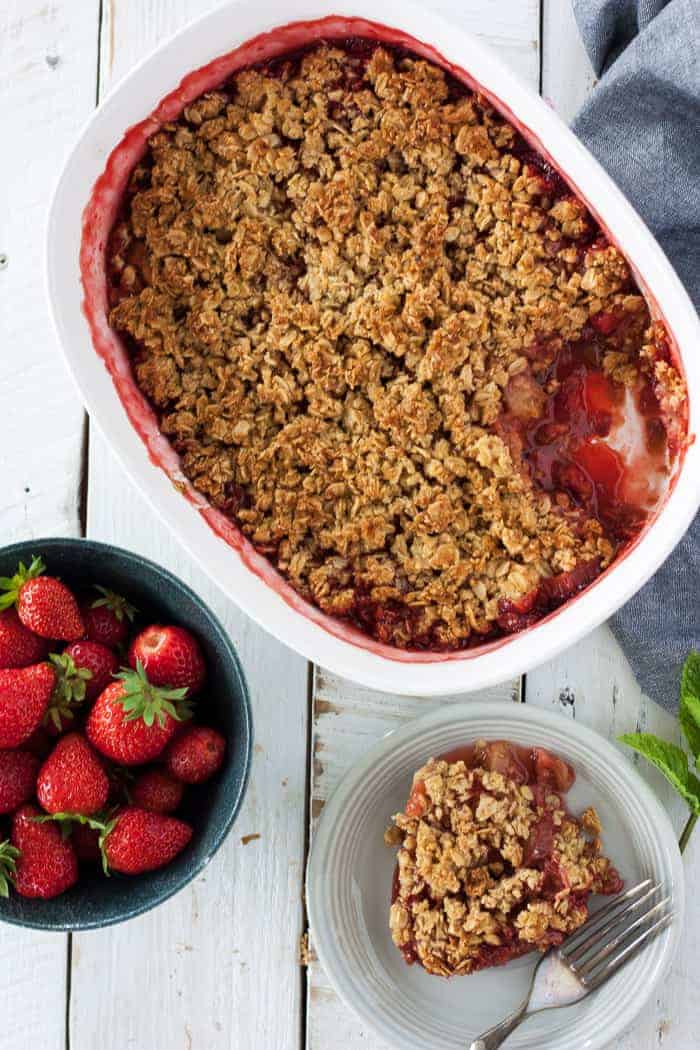 I’m leaving the Virgin Mojito and Trader Joe’s Shopping List off the top five this week because frankly, we’re all sick of seeing them!

Instead, I’m bringing up a few posts that are close to breaking the top five…and three of them involve peaches!

We’ve been testing out Momables and love it! The boys were super happy with all the dinners we have had from the meal plan. Momables emails you a weekly meal plan, shopping list and prep list for $10 a month.  But…this week is the Pantry and Freezer clean out challenge, so we’re not following the Momables plan.

Monday:: Instant Pot Lentil Soup (non-Instant Pot instructions included) and biscuits (savory, not cookies for my overseas readers). This is a perfect pantry clean out kind of meal!

Tuesday:: Rainbow veggie pasta and kale salad (I have kale in the garden thanks to some starts from aunt and uncle)

Wednesday:: Paleo Roasted Chicken, Air Fryer Asparagus, and some skillet fried potatoes. I found a random potato plant in the garden and yanked it.

Thursday:: Paleo Chicken Pot Pie Soup made with leftover chicken from the night before, and Crack Bread (in the spirit of the challenge, I’ll make baguettes instead of buying them).

Saturday:: Homemade Ramen Noodle Bowls because I have everything, including potstickers!