Troy and I finished season two of Killing Eve this week. Man. It.got.weird.

We decided that we needed something a bit lighter after that and I had heard good things about Schitt’s Creek for years. We’re four episodes in and are not convinced. It seems like everything we should love, but we’re just not feeling it yet.

I’ve heard it gets better in season three. Is it really worth sticking around for that? Tell me what to do!

Also, when in the heck did Eugene Levy get so fit? When did that happen? Is it just good tailoring of his suit or did he just get juiced? Am I attracted to Eugene Levy??? Is there a name for a person with a thing for eyebrows? 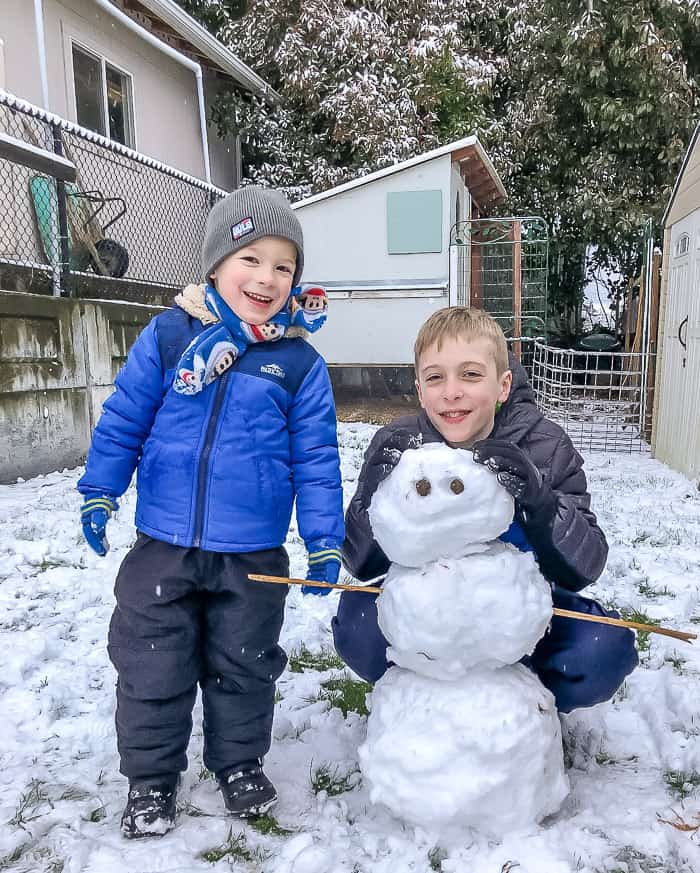 We had two snow days and a two-hour school delay this week. AKA, the week I hardly got any work done and once again can’t believe people live in and travel around in an RV with their kids. 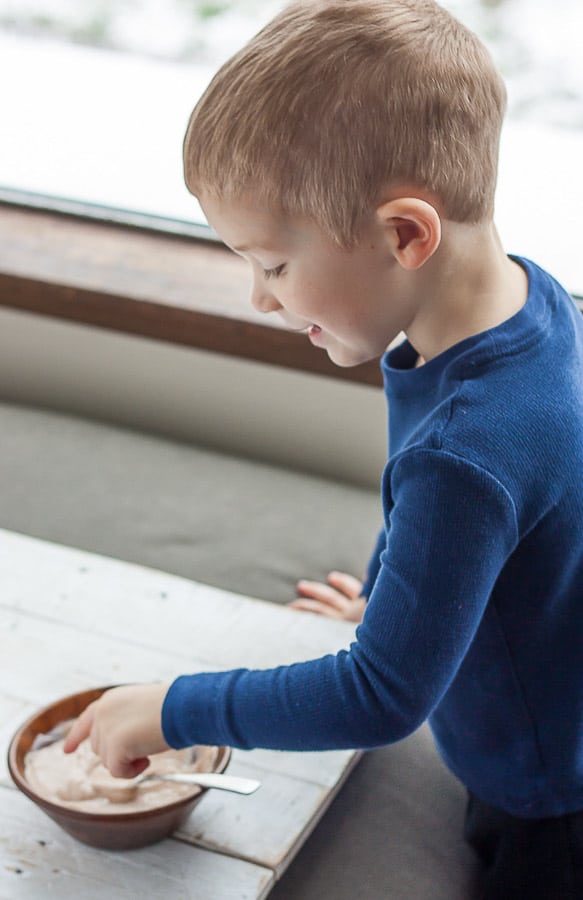 “Momma, take a photo of me touching your photo food. Are you sooooo mad”?

There was not enough snow to sled for more than a few minutes, which was a total bummer. Living on a bonkers steep hill has its perks on snow days, and I’m a sledding addict!

On Wednesday afternoon, I took a walk to get out of the house and there was a little bit of snow falling. By the time I got home, it was coming down hard. Even then, it was still a fantastic walk. So pretty, and the cold air cleared my head and made me walk bonkers fast. 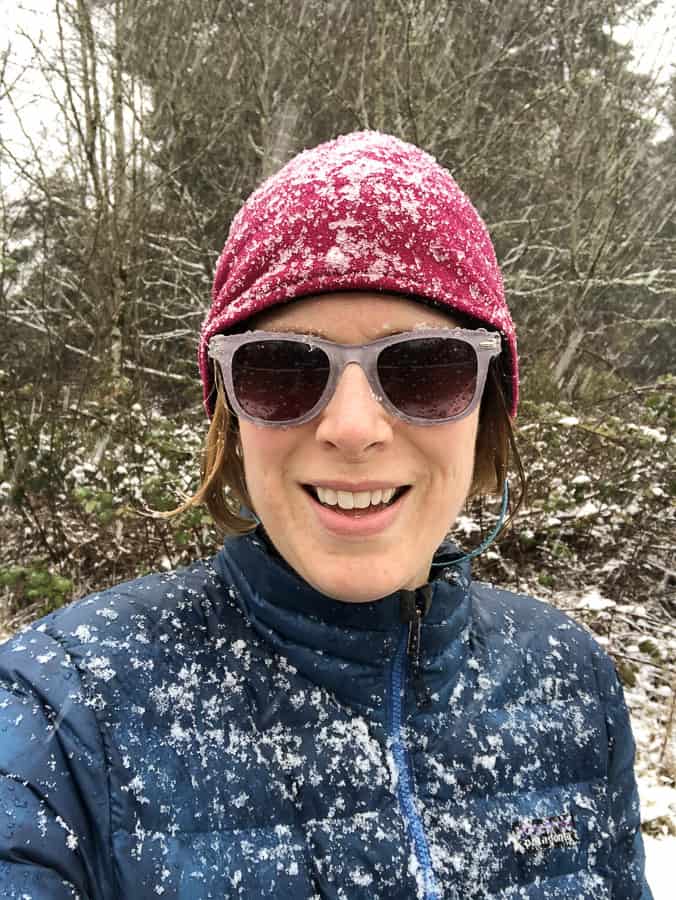 To kill some time (and so I would not kill them), we ended up going to the cheap movie showing of Jumanji with my sister-in-law, brother-in-law, and mother-in-law. The boys liked it (Bennett thought it was too long, but he also had to skip his nap and was TIRED), but the best part was seeing it with my SIL. She has the best laugh and being with someone who just enjoys funny/silly things makes everything twice as good. 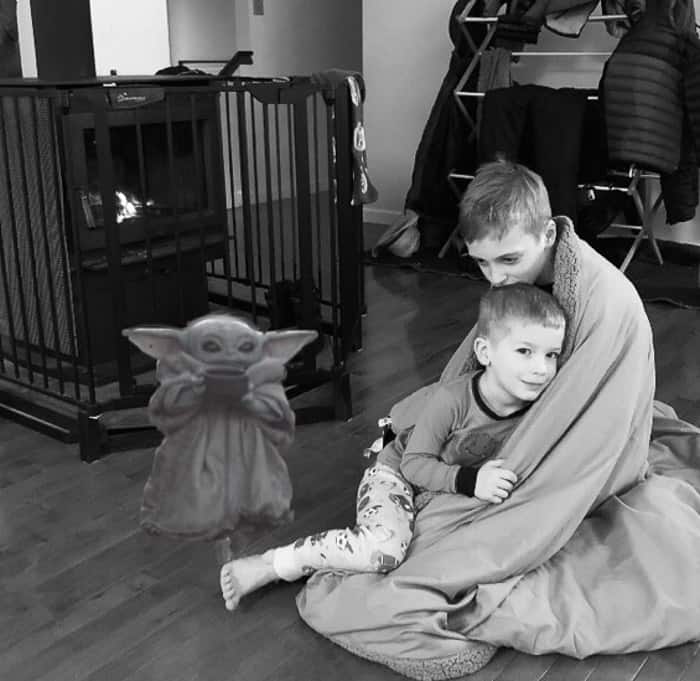 Last year I recommended the Wondery podcast called Gladiator (head’s up, everything I’ve heard from Wondery is great!). It was a really in-depth look at the rise and fall of Aaron Hernandez, the Patriots player who was sent to prison for murder.

Well, Netflix now has a documentary about it called Killer Inside: The Mind of Aaron Hernandez. It seems to be a docu-series because so far they have only released a 45-minute episode. It’s really good and I’m interested in seeing the rest of the series. 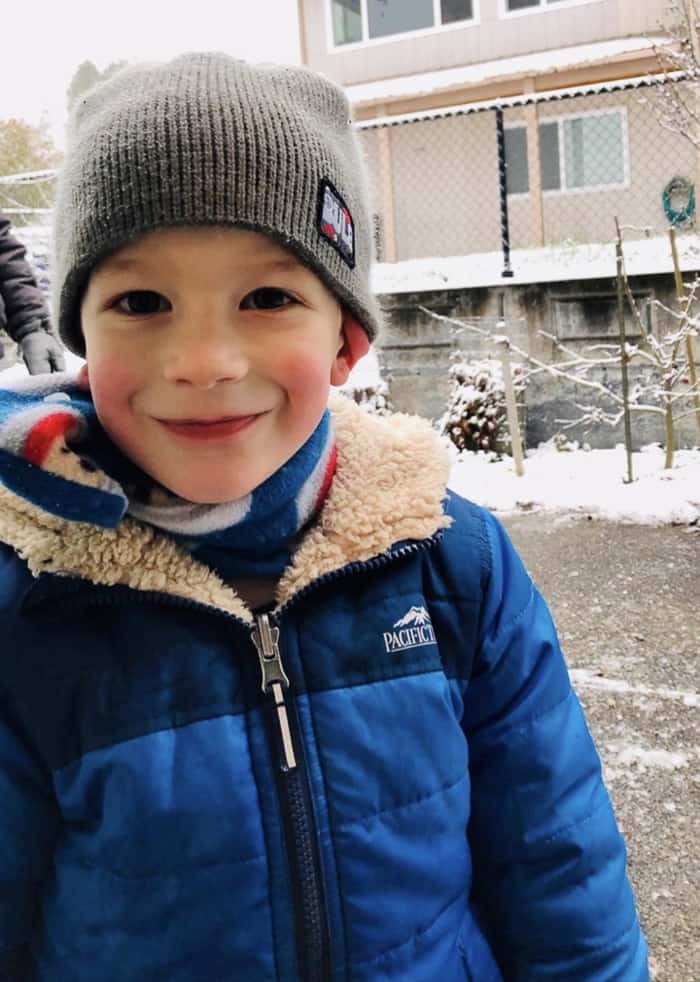 Do you remember in the early 2000s when everyone and their mother had a purse with the first initial of their name on it? I ask because I saw Sharona carrying one on an episode of Monk and had a “whoa, what were we thinking” moment.

Also, how much crank was everyone on from 1997-2005? Holy smokes, the eyebrows on these women. Were we all just issued tweezers on January 1, 1997, and told to go wild? It was a real scorched earth policy with eyebrows.

Y’all (ya’ll? We’ve covered this before and I can’t remember what the consensus was), I’m having an affair with a box of organic Triscuits and Tillamook extra-sharp cheddar. Don’t tell Eugene Levy and his eyebrows. They have jealousy issues.

I’ve been a Triscuit fan for years, and Costco recently started carrying the organic ones again. Three ingredients people! My friend Cassie told me she has never had a Triscuit (c’mon Australia). So, I’m forcing her to get some when we’re back in Utah together in April for a food blogging conference. This is not sponsored by Triscuit (though hit me up people); just pure cracker love.

Jack had a soccer game yesterday and I’m still amped up about it! He plays on a 9/10 indoor team and the coach made the decision to play them up a year. We’ve been playing 11/12 teams the whole time and mainly we lose and lose by a lot. It’s so frustrating to watch and the team is bummed.

Well, yesterday, we played a team of GIANTS. They were all 12, going on 13. They had a few kids that were easily twice the size of our smaller players. I’m pretty sure I saw a few of them shave at half-time. They were signing up for the draft and to vote after the game. They were mammoth. It was like watching the Seahawks play a high school team.

Right out of the gate they were killing us, but we eventually came within a few points of not dying. In the last 8 minutes, we scored a few and held them off from scoring anymore. We tied it up with two minutes to go and prevented them from adding to their score.

We were tied with eight points each and they had a penalty kick on our side of the field with 11 seconds to go. Our goalie (who is awesome!) lunged for it but missed and it hit a wall. The ball was free and 10 feet IN FRONT OF THE DAMN GOAL with no goalie. Their forward kicked it high and from nowhere, Jack leaped up and blocked it. With his butt. Saved by a butt.

And speaking of butts, that game has mine still puckered. Phew! Not sure I am cut out to be a sports parent.

Butcher Box is back with their wings for life promo for a limited time (perfect timing with the Super Bowl). All new Butcher Box customers will receive 3 pounds of organic chicken wings in their monthly order. Get this amazing deal here!

I took a bit of a break from most podcasts this week and am listening to an audiobook from the library called The Traitor and the Spy.

Post-WWII, spying and the iron curtain are totally my jam. I’m not sure how this would be as a book (maybe a little dry?) but I love it as an audiobook. If you’re into this genre, I also highly recommend Child 44 and Edge of Eternity.

I’m still working on King Maybe this week. There was a bit less reading time than I anticipated due to school being closed for two days. Dang it!

Becky left this five-star review for our Instant Pot Tortilla Soup With Rice {Pin this recipe}:

This is the ultimate quick to throw together, one-pot meal! I LOVE step 1: add all ingredients, lock the lid. We didn’t even have to wash the meat cutting board because I just cut the chicken with my kitchen scissors right into the pot.
And, of course, it tastes great! I’d never used Veggie juice in a recipe before but really liked it. Thanks for another great recipe, especially wonderful for a weeknight! Can’t wait to have the leftovers tonight. 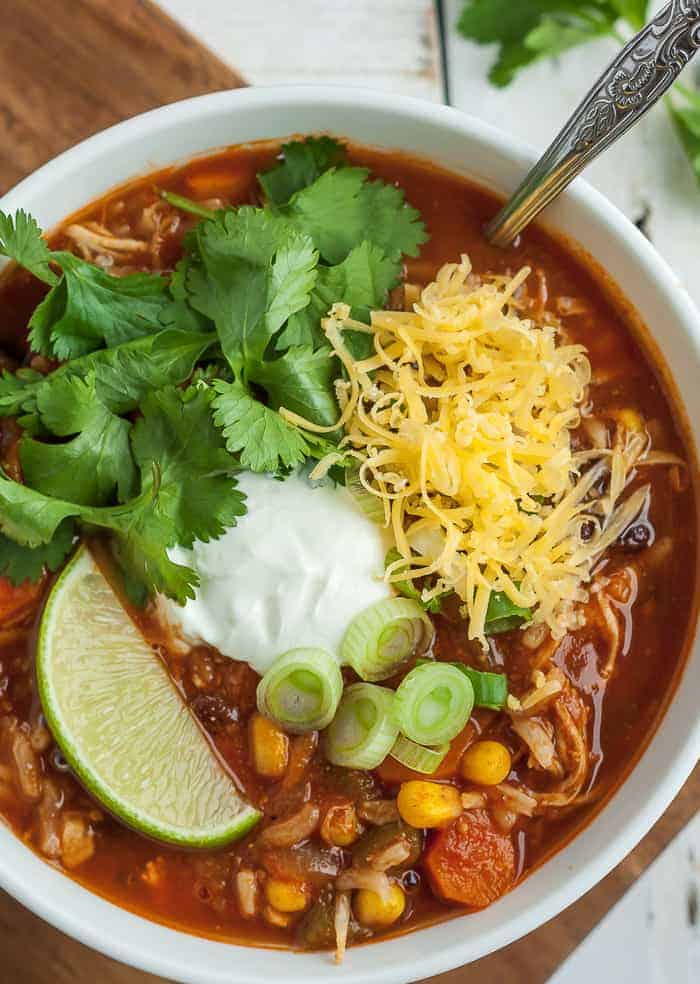 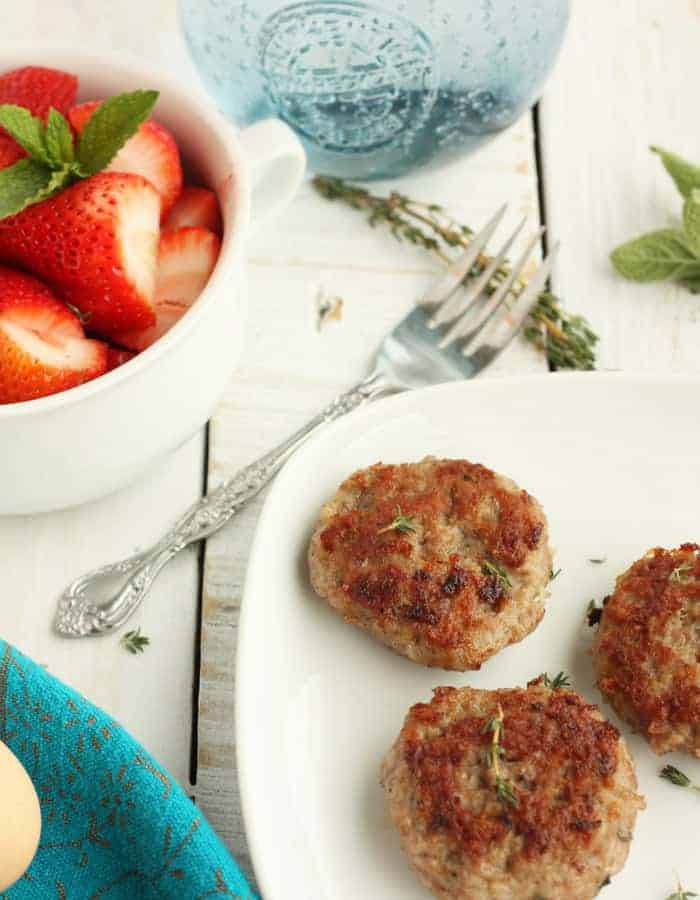 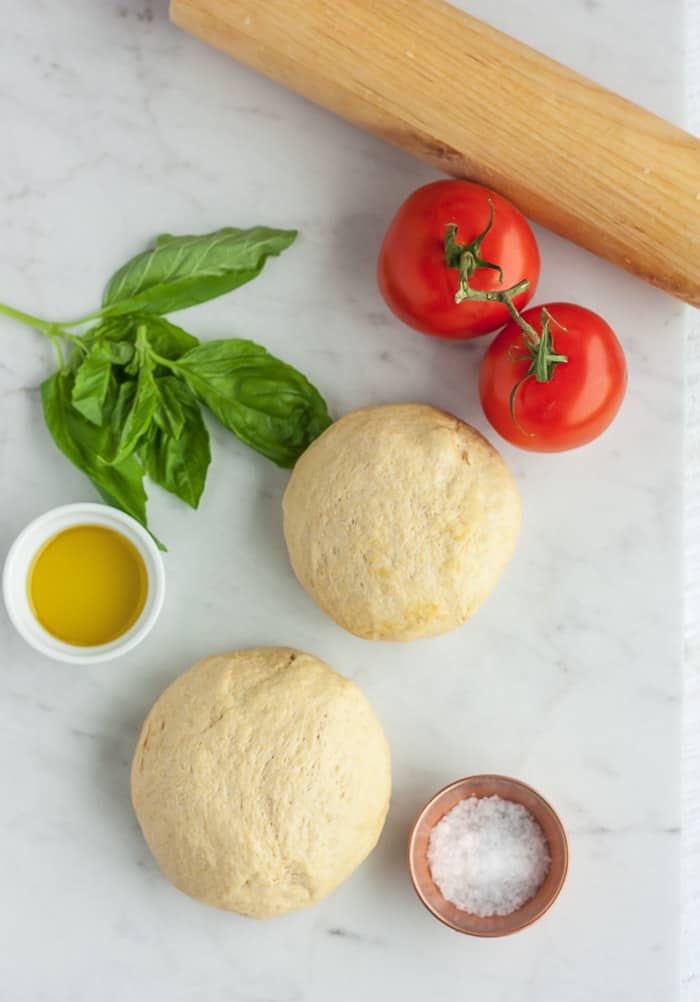 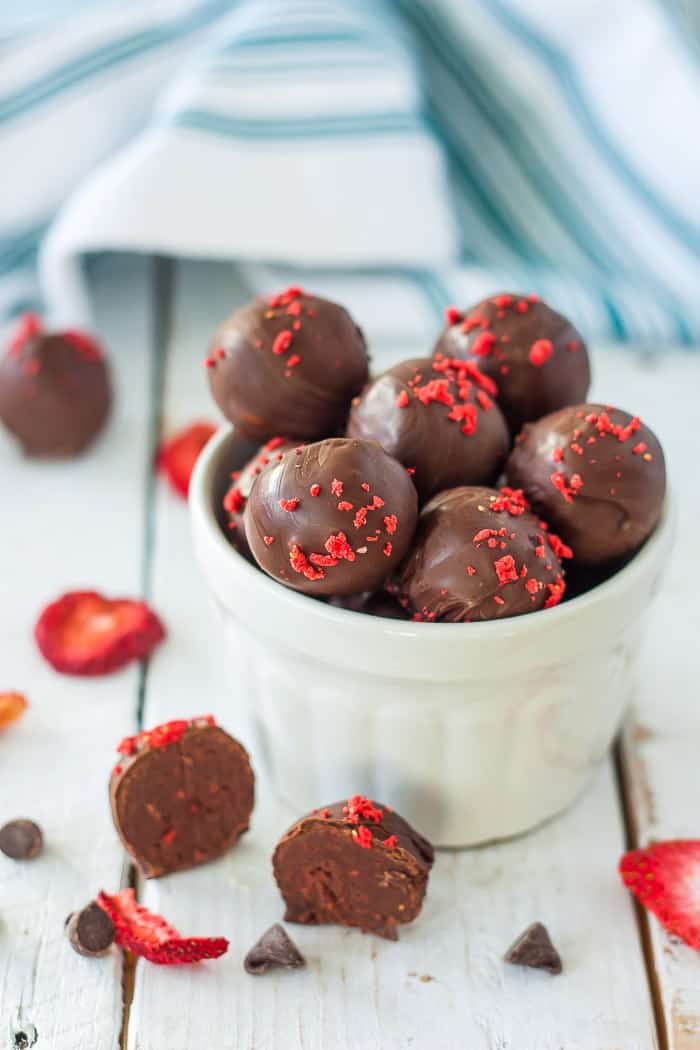 Air Fryer Pretzel Bites – These Air Fryer Pretzel Bites are so easy to make and taste amazing! Chewy, soft, and perfectly salty, you’ll love this pretzel bites recipe for an afterschool snack, game day treat, or anytime you need the perfect party appetizer. No air fryer? Don’t worry because I have oven-baking instructions too! {Pin this recipe} 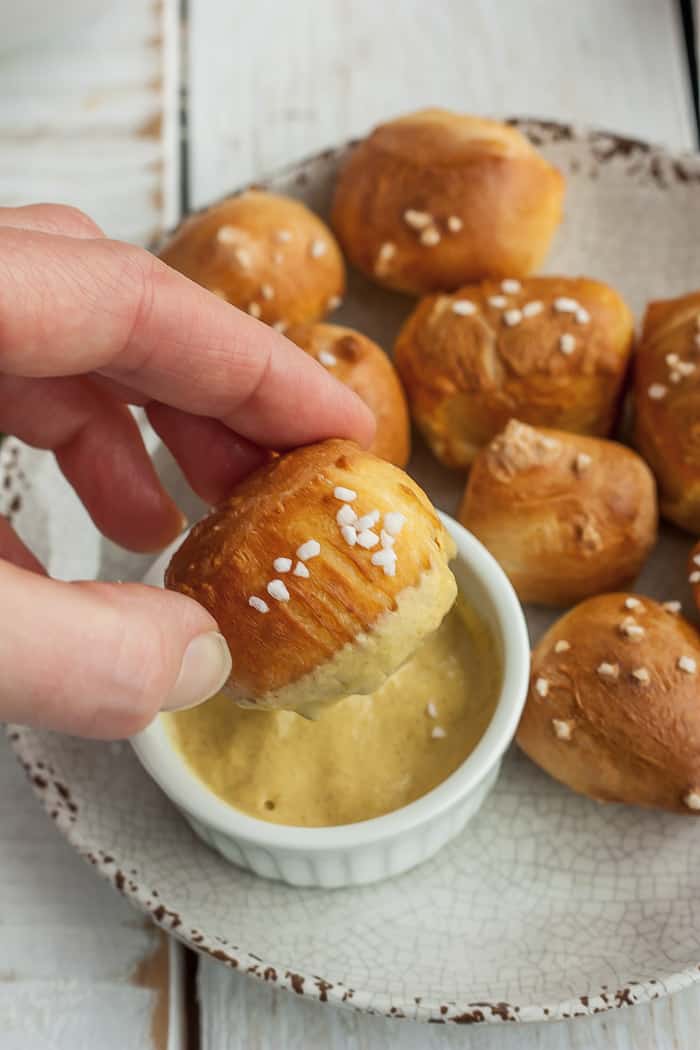 Our Virgin Mojito was still on top this week, but the next five all have something in common – healthy eating and fast comfort food.

Wednesday:: A recipe I’m photographing for an upcoming post

Thursday:: Appetizer dinner because I’m photographing some apps the day before

Saturday:: I’ll be out of town so I have no idea what they will be eating. Troy is a grown-ass man, perfectly capable of feeding two children. Best guess…Subway. 🙂