Good morning (eh) from beautiful British Columbia Canada (eh)! I popped up yesterday mid-day to hang out with my blog bestie and sarcasm twin Katie from Hey Nutrition Lady.

She lives in Sweden but is from the Vancouver area and flew home to surprise her sister and meet her new niece. And in true (me) fashion, I invited myself up to see her. I prefer to see friends who live where there is a favorable exchange rate. 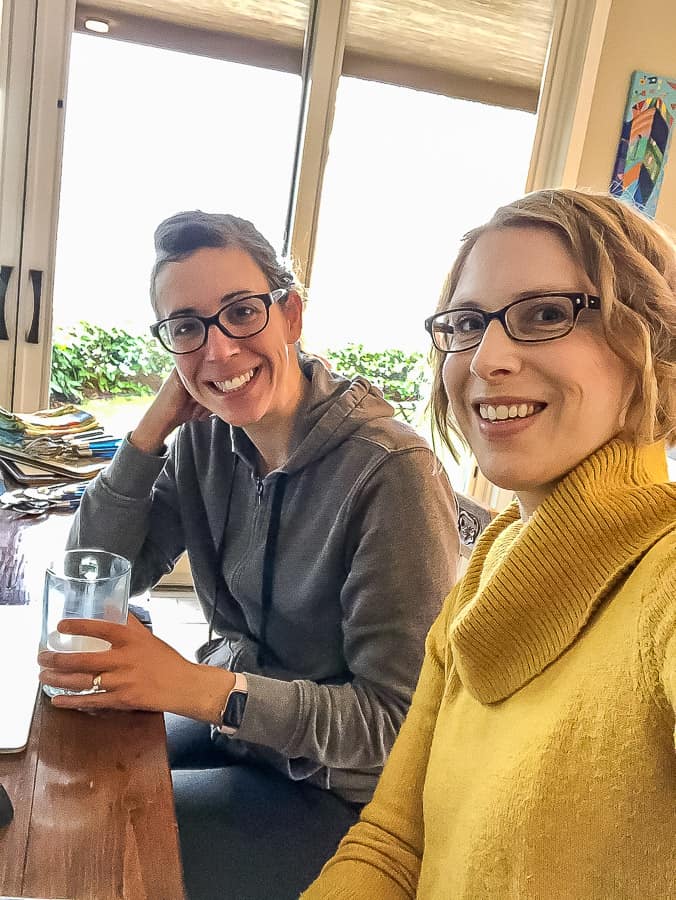 Katie and I met in 2018 in a blogger’s Facebook group. For the record, she picked me up. She has good taste.

We first met in person in December 2018 when she and her newborn flew home from Sweden and I drove up for our first real date. Both my family and hers were convinced that one of us was cat-fishing the other and had the potential to be a serial killer.

Surprise (!!), we’re both still alive and our family actually spent a few nights with hers last summer. Bennett spent some quality time butt-naked on the beach by her family’s house, and Bennett and her son Niko bonded by peeing together under some trees in a park. It’s how preschoolers manage international diplomacy.

For her sister (the new mom), I brought a batch of No-Bake Lactation Cookies because even if you don’t have supply issues, these nutritionally dense cookies really help during those early days of breastfeeding hanger.

I was warned by Katie on Thursday that we were in charge of making dinner for her family and in-laws for Saturday night and I better bring my A-game. No pressure, right?

Katie is a vegetarian but the rest of the family are omnivores, so we went with some roasted chickens (I was on point for that obviously) and tons of yummy sides. Putting two food bloggers in a gorgeous kitchen and giving them free rein is pretty much heaven.

It was also Katie’s birthday this weekend, so it was fun to celebrate that with her. Katie’s biggest blogging pet peeve is when people post photos of recipes with a bite taken out of the item. It makes her skin crawl. So naturally, I made her this birthday card: 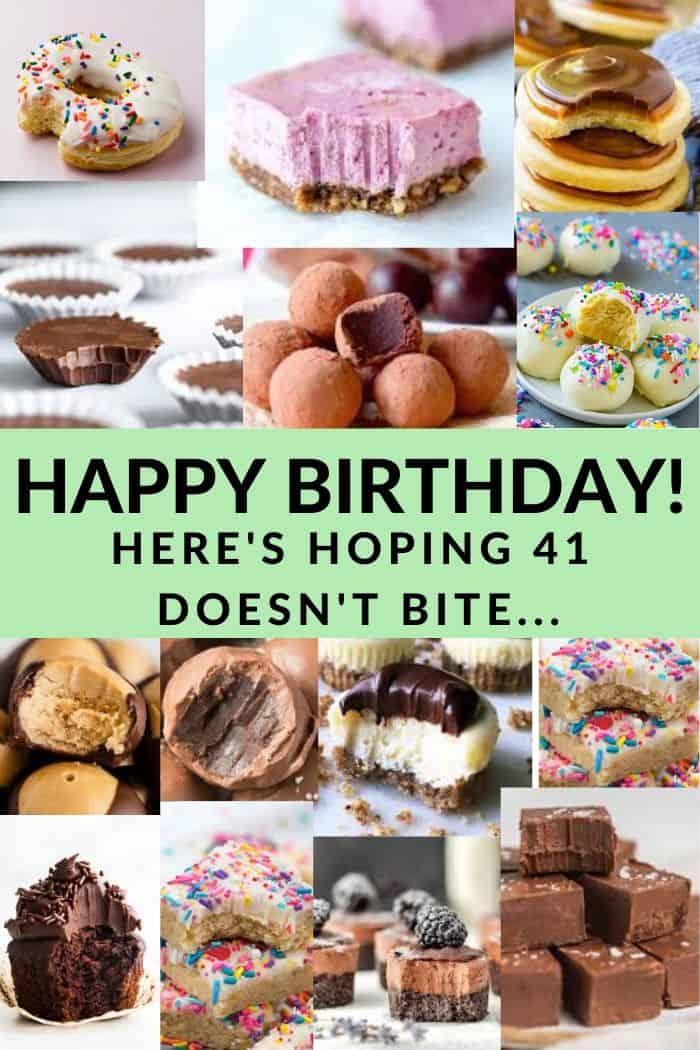 Bennett had a preschool field trip to the Seattle Aquarium. I’ll be honest, I didn’t want to go. I wasn’t required to go. But I felt like I probably should. I never got to do that stuff with Jack because I was working outside the home and commuting.

When I told Jack I was going on the field trip, he said “that sounds awful. A whole bunch of little Bennetts and crazy three-year-olds”! This kid gets me.

It ended up being fine and I’m mostly glad I was able to go. After our snow days last week, I’m still behind on work and trying to play catch up. But in five years I (probably) won’t be thinking about missing that one workday, but I’ll (probably) remember getting to go on a field trip with this little guy. 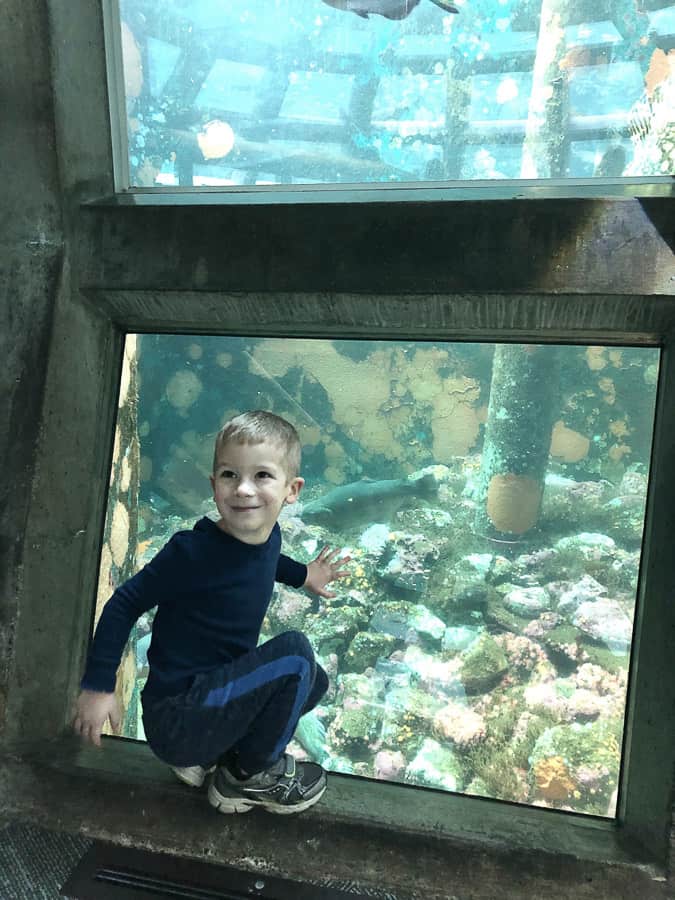 Jack heads out to fifth-grade camp on Tuesday! The end of January isn’t what I would call the nicest time of the year for camping, but whatever. He’s super excited and a bit nervous I think.

He said that during the “what to bring” discussion in class, a bunch of kids asked if they could bring their weighted blankets. He was pretty surprised that almost half his class had them and wanted to bring them.

I’ve written before about how his weighted blanket has completely solved his nightmares issues…which in turn has improved MY sleep. I think it’s great that so many of his friends have them so he won’t feel like he’s singled out for having one at camp. But I think that school bus is going to weigh a solid 300 pounds more than they expected. 🙂 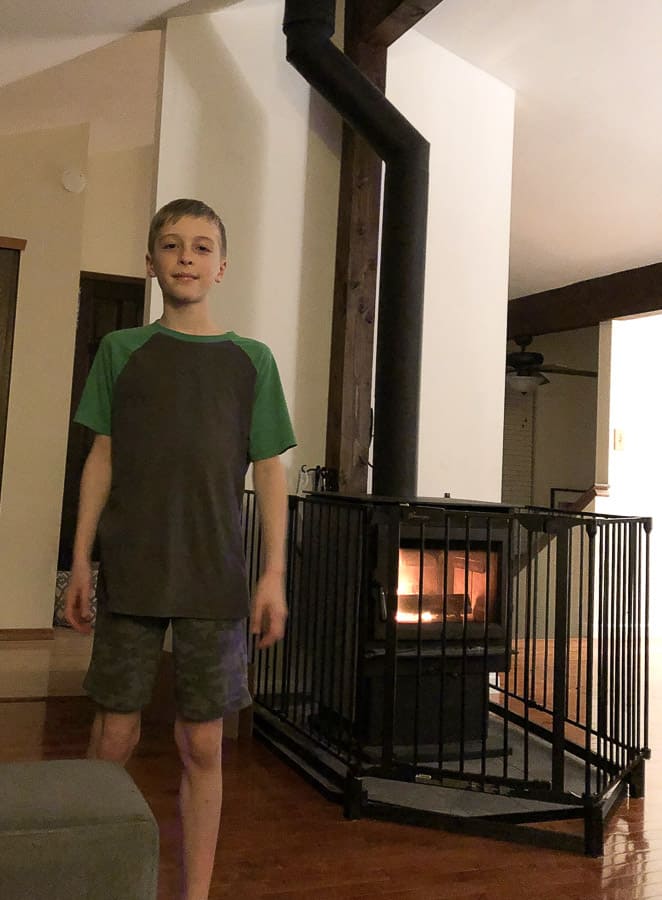 Overnight he started looking like a mature giant to me.

On Tuesday, Mr. Bennett turns four! Surviving his three’s has been a goal since last January, and for the most part, I think we’re on the upswing of preschooler insanity. 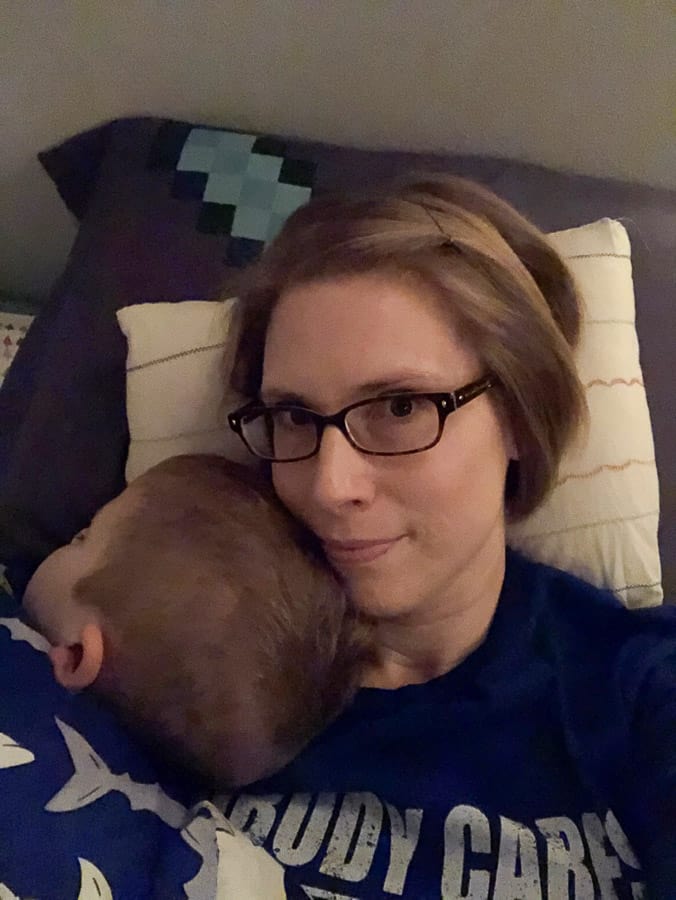 This little chicken is hilarious, artistic, crazy, and despite wanting to do everything his beloved big brother does, he’s very much his own person. 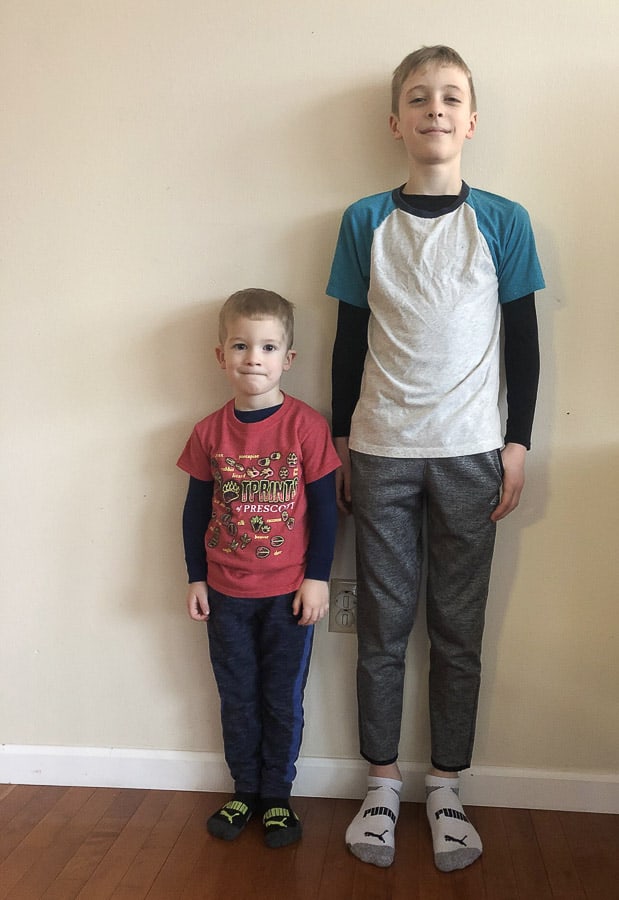 At this age, Jack was obsessed with superheroes, sports, and winning at everything. Bennett, who marches to the beat of his own drum selected a sloth theme for his party. It made Troy and I laugh because it’s very on-trend for this kiddo who wanted to be the evil nun for Halloween when he was two and has previously selected birthday themes of “peacocks and ferry boats” and “me riding on a shark”. 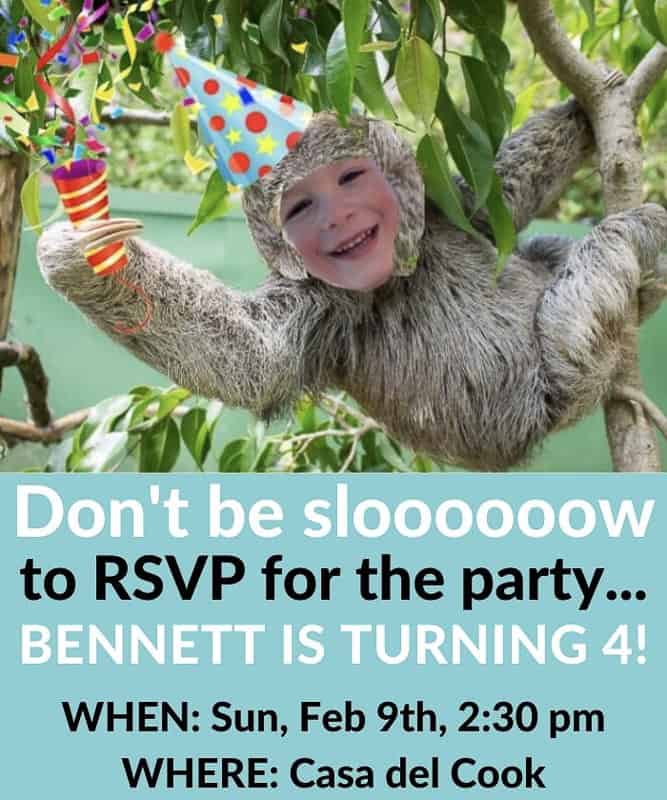 For anyone who has been reading this blog for the last four years, you’ll remember he was born eight hours after his due date because I begged him to stay in until noon on January 27th. That was the last time he ever listened to us.

I had been working on a brutal project for over a year at work with two other coworkers and it had to be presented to visiting accreditors January 25th-27th. They left at noon on the 27th, I went home at 3 pm, obvious labor started at 6 pm, and Mr. Bennett was born a little over 12 hours later. 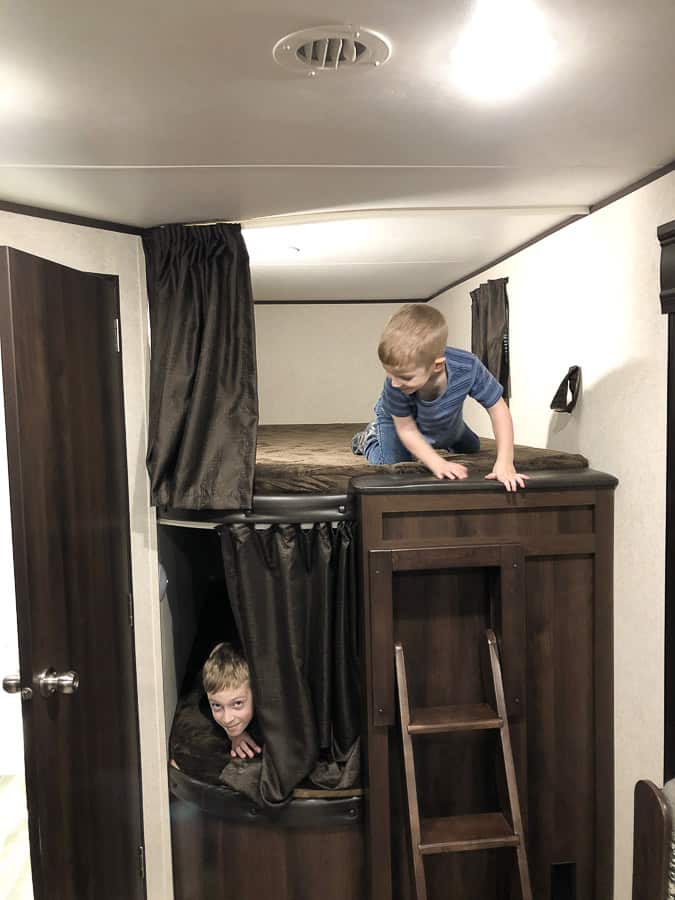 Last weekend we went to the Tacoma RV show. No, we aren’t looking to purchase an RV…my kids just LOVE to look at trailers and campers. They are also obsessed with checking out garden sheds at hardware stores. Cheap entertainment.

We spent almost four hours going in and out of motorhomes, campers, and fifth-wheels. The boys were having a blast even though Bennett was cruising right through nap time.

On our way out, we stopped by the Smith Brother’s booth (they are the milk delivery company we use) because the boys know a Smith Brother’s booth always means free chocolate milk. And what I love about the people who work these events is that they provide paper straws (even though I carry reusable straws in my purse, they gave us paper ones before I could say “no thanks”) AND they always give the parents Tony’s Organic cold brew. What’s not to love about that?

If you’re in the Puget Sound area, we highly recommend Smith Brothers and have been customers for 10 years. Click here to sign up and take $20 off your first order. 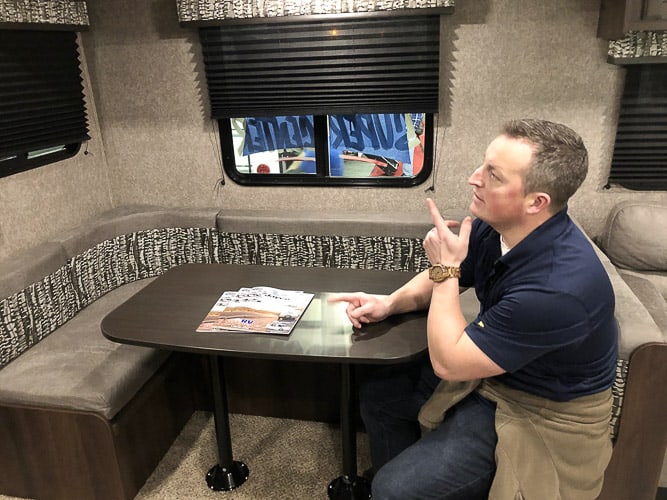 This RV model comes standard with an annoyed dad who was officially over your crap.

This week, I was excited to be included in a round up with other bloggers over on Sip Bite Go for a great article on Why Food Blogs Fail. If you remember, mine totally almost failed and I came super close to shutting everything down in 2017. If you’re interested in the business of blogging, this is a great article.

Trying to eat more veggies or plant-based meals this year? If so, I’m excited to introduce you to the Green Plate Club. The Green Plate Club is a subscription service that costs just $6 for one month, $15 for three months, or $50 for an entire year of weekly flexitarian, vegan, or vegetarian meal plans.

If you use the code HNL at checkout, you’ll get $5 off of an annual subscription. So that’s an entire year’s worth of meal plans for just $45. Disclosure: I’m not making any affiliate from this amazing service, so I have nothing to gain from encouraging you to try this out. Other than readers who are less stressed by meal planning! Check out the Green Plate Club today!

I’ve been a long-time fan of the Pop Culture Happy Hour podcast from NPR, but I’m not sure I’ve ever shared it with my readers. The revolving panel of three main hosts plus a guest host, discuss books, movies, TV, and music.

I finished up King Maybe this week during soccer and started the next book in the series, In Fields Where They Lay.

The setting for this series sounds bananas cheesy (a burglar who inadvertently becomes a private investigator), but the writing it SO good, so clever, and whip-smart!

I received my grain mill last weekend. A neighbor had given me some fresh stone-ground whole wheat pancake mix. I have never tasted anything so fantastic. we always eat whole wheat in our house, and it mostly tastes bitter to me. Not this, it was almost sweet and sooo delicious. That sent me on the quest for a grain mill. I made these muffins using my freshly ground ww flour and they are pure heaven! Honestly people, this is the way to go! 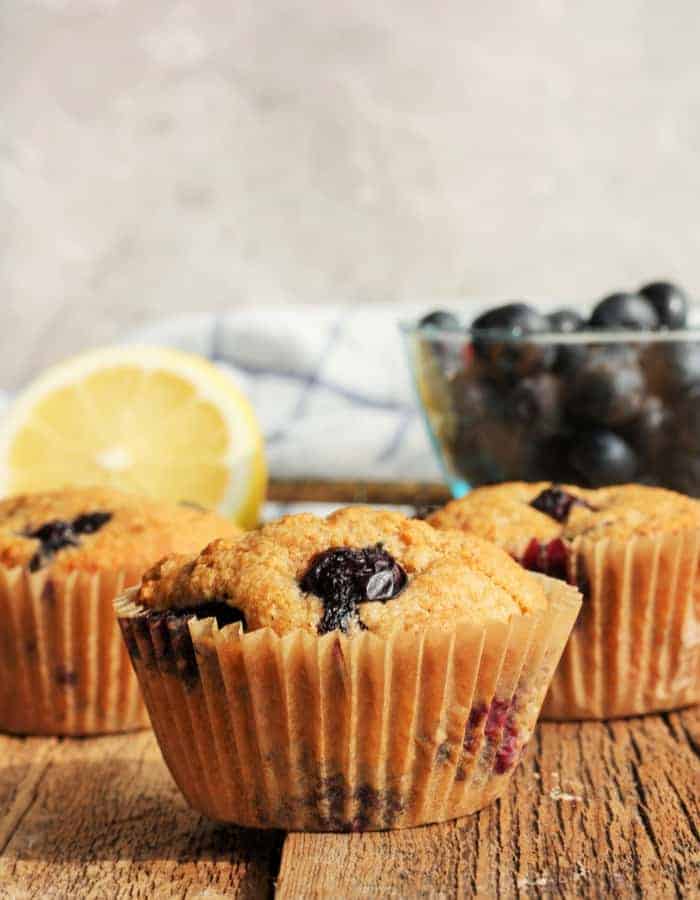 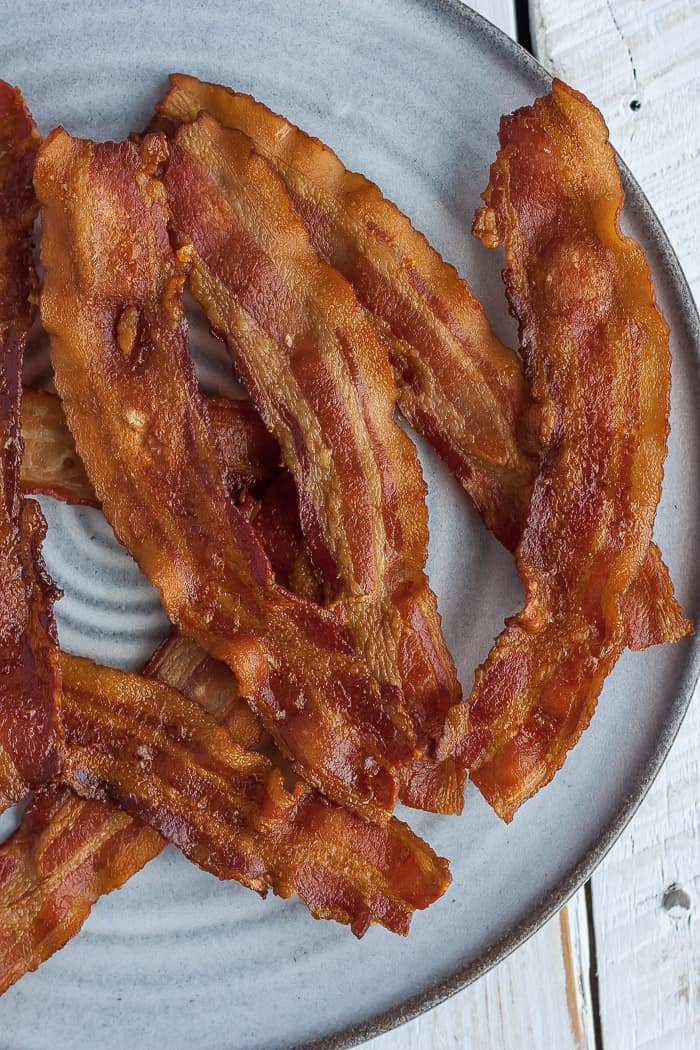 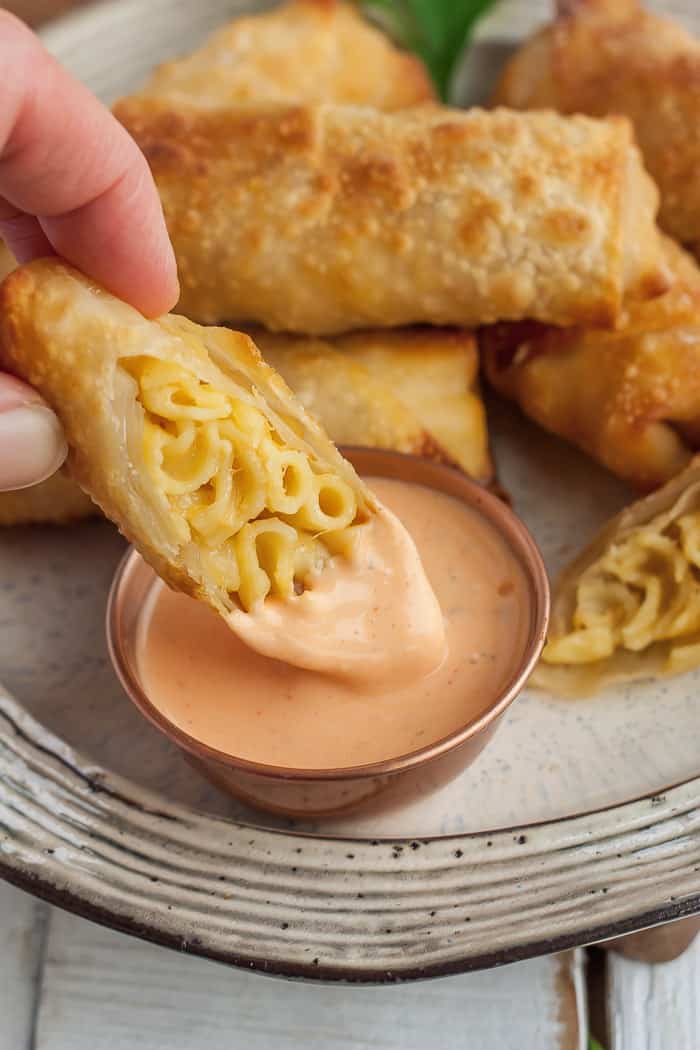 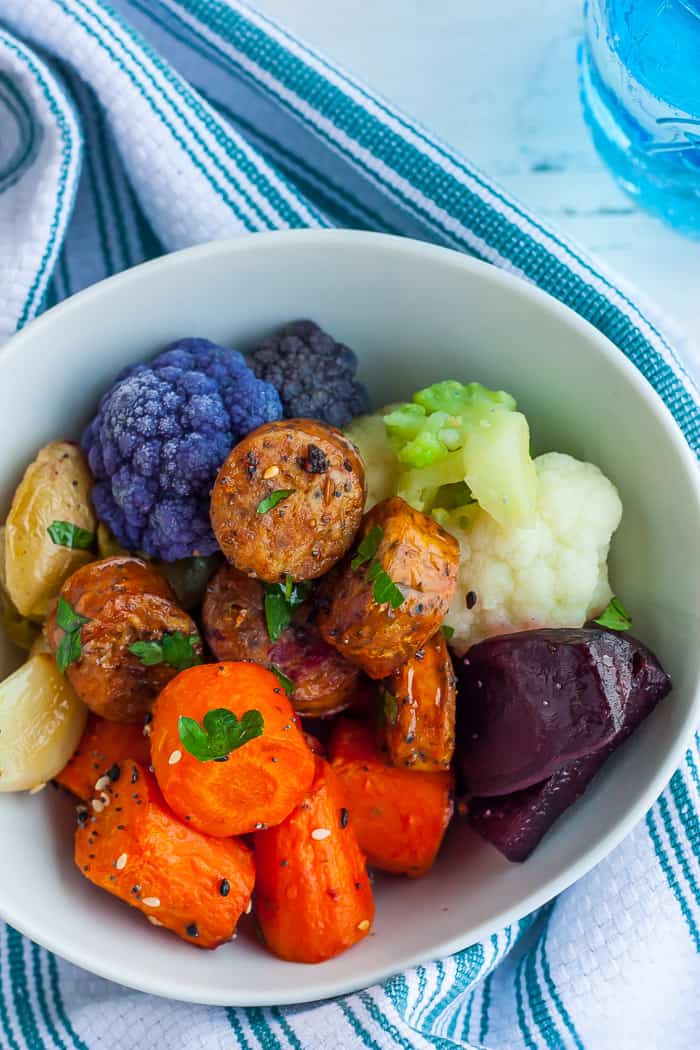 The Virgin Mojito is gracing the #1 spot again today. Here are the rest of the top six:

Monday:: It’s Bennett’s 4th birthday tomorrow but Jack will be at camp so we’ll take them out early. I think he is angling for seafood.

Tuesday:: Instant Pot Beef Tips and Gravy with rice and a bunch of veggies on the side.

Wednesday:: A new Instant Pot recipe I am photographing during the day

Thursday:: Appetizers (from a recipe I’m photographing the day before) and leftovers.

Sunday:: Super bowl – aka, all the appetizers! Jack has requested: organic hot dogs, Air Fryer Pretzel Bites, Air Fryer Egg Rolls (but he randomly calls them potstickers), fruit with fruit dip (I use plain Greek yogurt with a little bit of homemade brown sugar and ground cinnamon), veggies, and chips and salsa. Bennett wants homemade hummus, and “to eat a dead crab”. One of those is doable.

Thrive: $75.04 (savings of $33.44 from conventional stores) – most of the cost was toilet paper. One of the weird things about working from home vs. in an office is you don’t realize that you’re going to have to buy more toilet paper since no employer is subsidizing my tiny bladder. 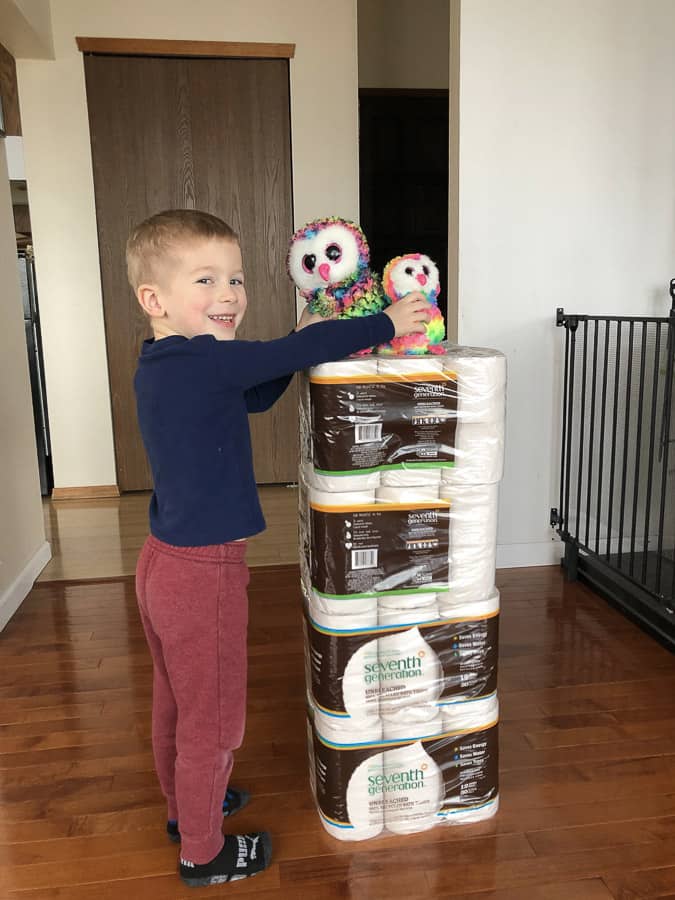 Interested in trying out Thrive for yourself? Join today for a risk-free 30-day trial and take an extra 25% off your first order. If you are a teacher or are in the military, you may qualify for a free membership. 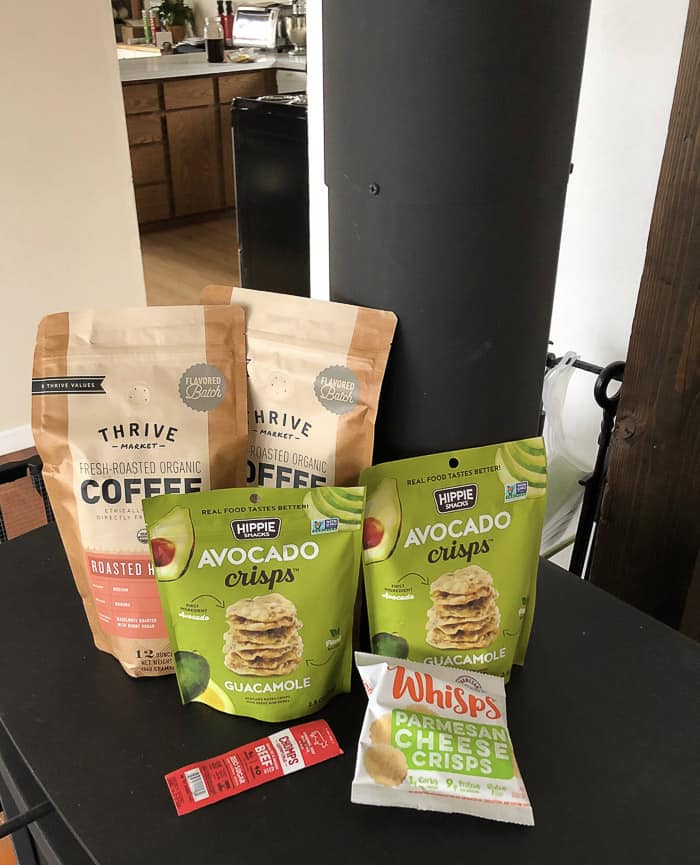 The Whisps and Chomps stick were free samples.

Costco: $53.20 – Bundaberg ginger beer is back!! It’s our favorite ginger beer (it’s non-alcoholic and like really intense ginger ale) and they didn’t have it for a few months. We’re stocking up each trip while supplies last. We each drink one a week on movie night. 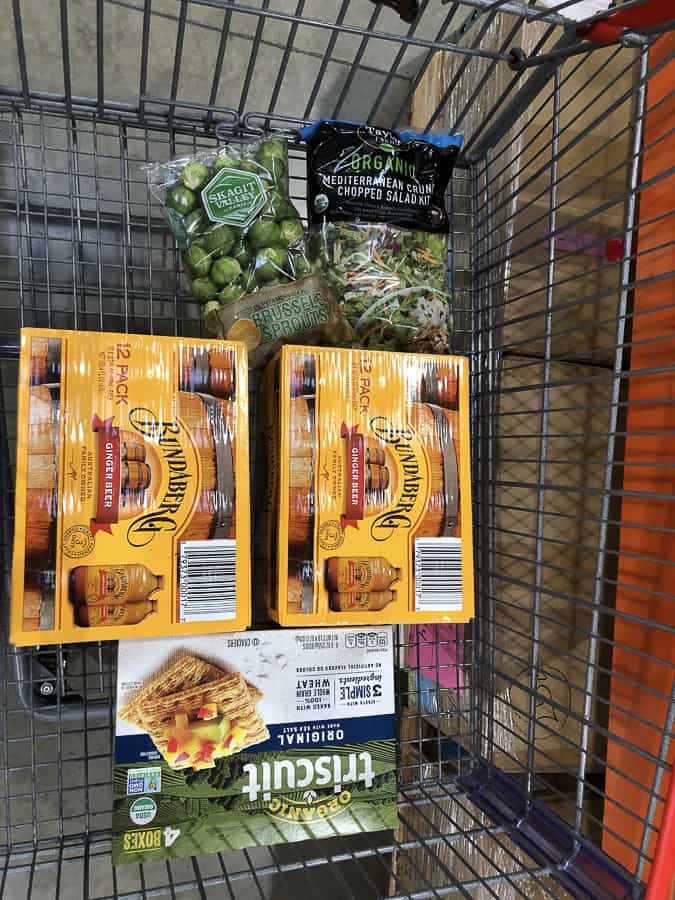 Fred Meyer: $31.03 (shoes and paper came from a different budget category. Those are the next size shoe for Jack and were on clearance for $14.97!) 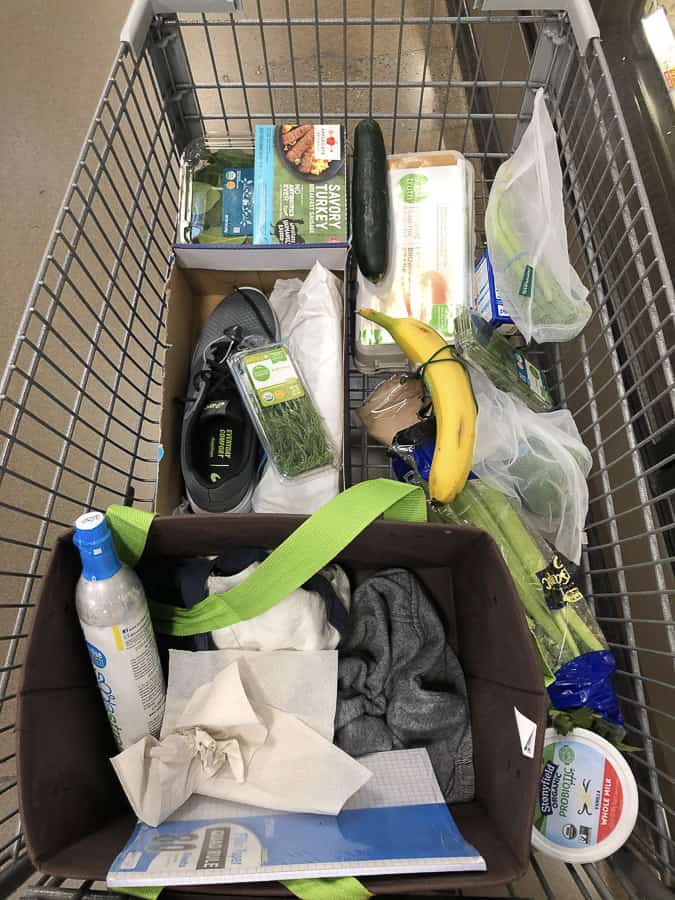 Trader Joe’s: $50.83 – lots of road snacks for me and a few things to bring up to Katie’s mom. The big red jug is vegetable juice that I use in Whole30 Beef Stew and Instant Pot Tortilla Soup With Rice. It adds great flavor and more veggies to lots of dishes. I divide it up into quart jars and freeze them (wide-mouth only jars and leave 1 inch of space at the top for everything to expand when it freezes). 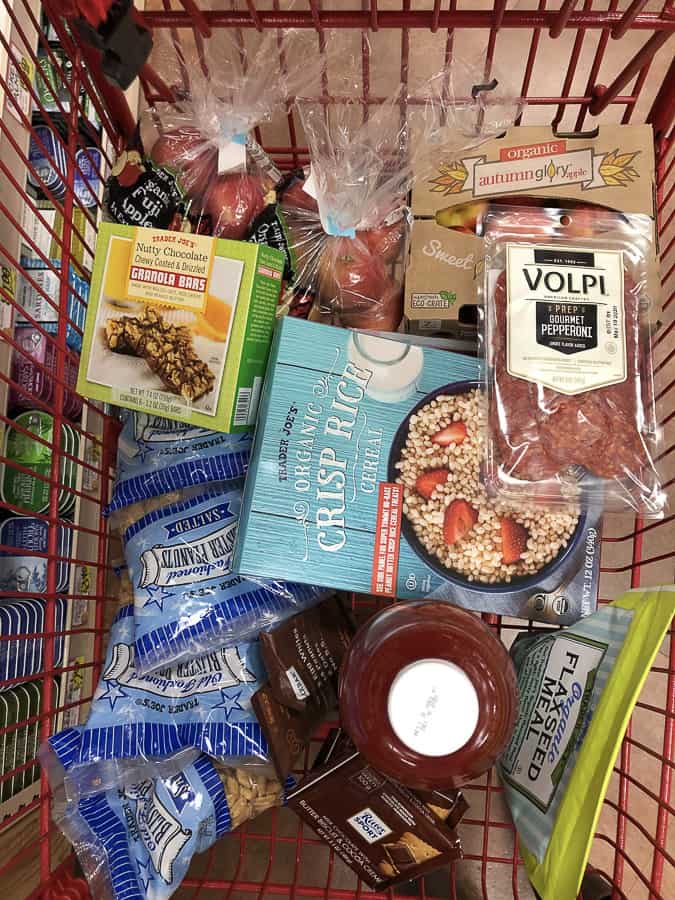 How to Freeze Fresh Produce