Snowpocolypse has ended, but the effects of Seattle’s biggest February storm system in 70 years lingers. The snow started on Friday the 8th and our (very steep) hill wasn’t plowed until Thursday the 14th. Everyone is working around the clock to clear the snow, but no county or city around here simply has enough infrastructure to handle this load.

The kids were home all week from school. All week. ALL WEEK.

The first few snow days started out fun with sledding, snowman and fort building. By Wednesday, I realized that Jack Nicholson’s character from The Shining was simply a misunderstood parent. 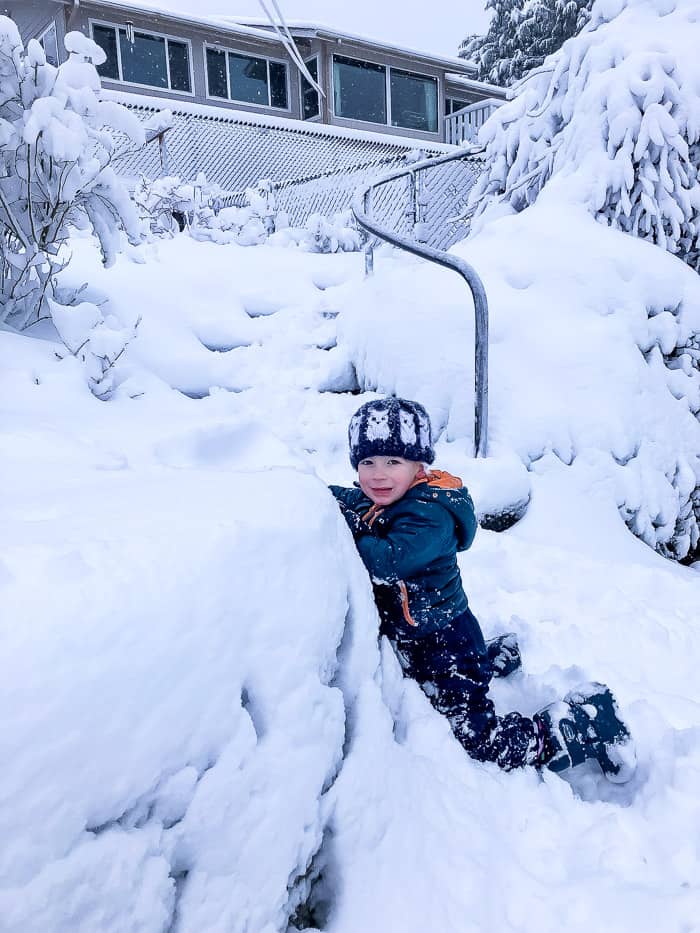 I have an amazing snow vehicle and Troy has a 4WD truck, but man, hills are no joke in the snow. The city tore up our road last summer for a new stormwater system and when it was repaved they put 4-inch berms on each side of the street. The berms are necessary to stop homes from flooding because when it pours, water rushes down our hill so fast and it overwhelms the system.

But let me tell you, those berms were my nemesis in the snow. I ran out to get chicken food (#priorities) and a few grocery staples one afternoon and even though streets and parking lots weren’t plowed, my Outback did great. I made it up my icy hill just fine but it all went to shit when I stopped on my hill to wait for the garage door to open.

After it opened, I tried to turn into my driveway and could not get up and over that berm. Couldn’t do it! And then suddenly, my car started sliding backward down my hill and my brakes were essentially worthless.

I went to school is very snowy (but flat) Eastern Washington and delivered pizza in that snow in a Honda Civic. I’m very comfortable driving in the snow. But I’ll tell you, when my car finally stopped sliding, I was picking my cloth seat out of my crack.

My car did a thing where it spun a bit and then I did a 3-point turn and got it pointed downhill. I was able to head down the street and then went up and around other streets to come down my ski slope of a hill. My car did great and I was able to finally get home. Phew!

Our neighbor grew up in Buffalo, NY and has a Jeep that he takes off-road. And even he was pretty overwhelmed by driving the hills. It took him two hours to get gas for their generator when the power went out.

The boys kept complaining about snow on their necks and in their coats (a valid complaint), so one morning I whipped up these little fleece collar things. When I used to ski, we called them “turtle furs”. No clue what the cool kids these days call them. You can wear them as a hat, neck warmer, and face guard. 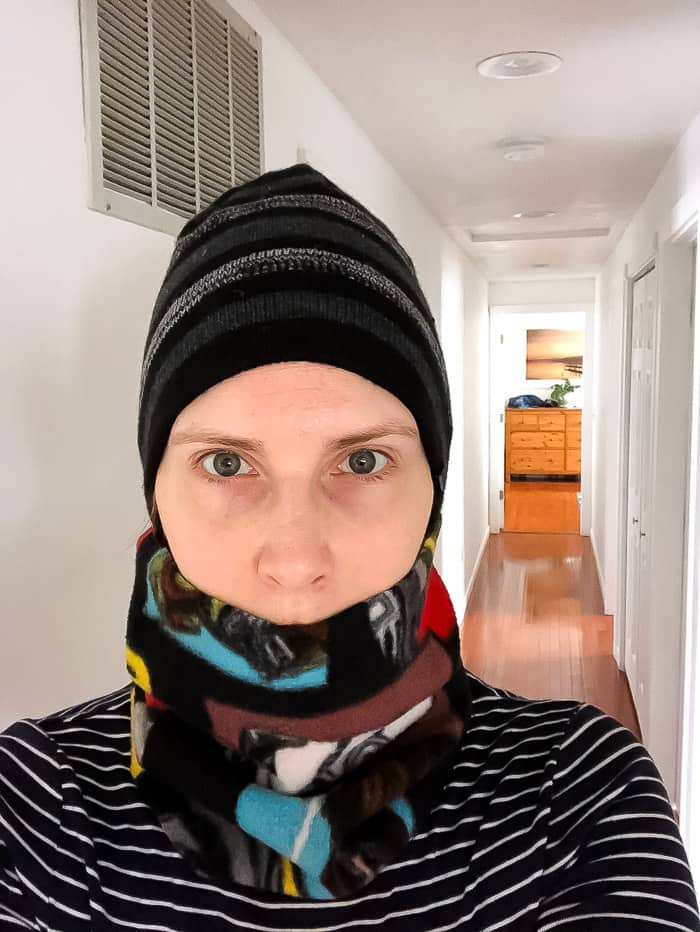 These are the dead eyes of a mother who lost her soul to her children during a snowstorm.

The blizzard fleece was leftover from a quilt I made Jack years ago, and all together they took about five minutes for four of them. I think if we lived in a place where it was cold more often, I would probably double the thickness or even put a thin and flexible piece of quilt batting between the layers.

Through it all, we had plenty of food, supplies, and wood for our wood stove. Our kids were annoying (sooooo annoying) but well-fed and warm.

By day two of no school, it started really weighing heavily on my heart thinking about the families who rely on free and reduced lunch in our district. My mom and my mother-in-law taught at the two lowest income schools in our district, and I know that population well. There is no safety net for those families. And the communities are so rural that they are probably still waiting to have their neighborhoods plowed. Running to the store even if they had the means was simply not an option.

When we got the “school is closed on Thursday” message on Wednesday afternoon, I swear I was going to cry. I couldn’t imagine having kids home that were also hungry. I ended up sending our superintendent an email asking how we can help those families. I was highly impressed by a response that came almost 20 minutes later.

The school district was arranging meals and they were going to be distributed at our local food bank. Our super let me know that they needed volunteers. I called, thinking it was a great cause and an awesome opportunity for Jack and my nephew to give back and have their privilege checked.

Sadly, they didn’t get back to me. But I told Jack about it and he said he wanted to help anyway. So, we’re going to look into volunteer opportunities for him.

I know our school district teams up with our library system to provide sack lunches during the summer. Churches and community groups in our district provide to go bags of shelf-stable food for kids to take home for weekends that are meant to supplement the food they might get over the weekend.

But I feel like extended surprise absences like this need some sort of game plan. Does your school district have any plan in place for feeding kiddos during extended absences? I really feel called by this and am motivated to act.

Not much else happened this week since we were pretty much at home most of the time. I did take advantage of Jack being around during the day and forced him to do some hand modeling (you’ll see those photos later this week). 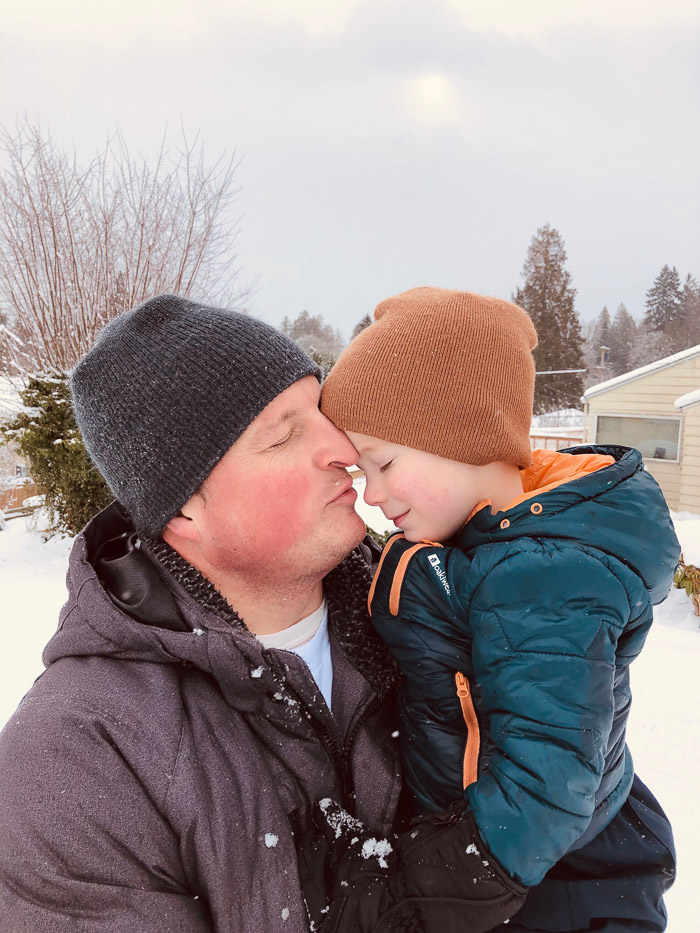 Reality check: Bennett is whining in this photo because I wanted him to give his dad a kiss for the picture. I just happened to capture a pause mid-meltdown.

My friends who made it to Costco and other grocery stores between storms said all the parents were stocking up on booze. There was quite a bit of day drinking happening in the Seattle area this past week. I don’t drink, but I made up for it in carbs and sugar. There was a near constant supply of Slow Cooker Hot Chocolate on tap. We made it dairy-free for Jack using Califia Farms, my favorite almond milk (I buy it at Target).

Oh, my, do I feel sluggish. All that sugar and no walks (some sledding) meant I am so out of it. Looking forward to some exercise soon!

I was not above turning to electronics to keep the kids out of my face (we had three movie nights in a row because I was done talking and listening), but there was a lot less TV happening during the day than I expected. A few things we turned to that kept the kids occupied:

Troy and I did our fair share of TV watching when the kids went to bed. We watched Russian Doll on Netflix, The Girl in the Spider’s Web (got it at Red Box), Close – Netflix (if you love action with a plot, this is great!), and started watching Southland (Hulu) from the beginning.

I have loved Southland since it was on TV almost 11 (12?) years ago but when we cut cable I lost touch with the show. I was excited to find it on Hulu and convinced Troy to start it over with me. About 10 minutes into the first episode, he said “ok, you’re right. This is a really freaking good show”. 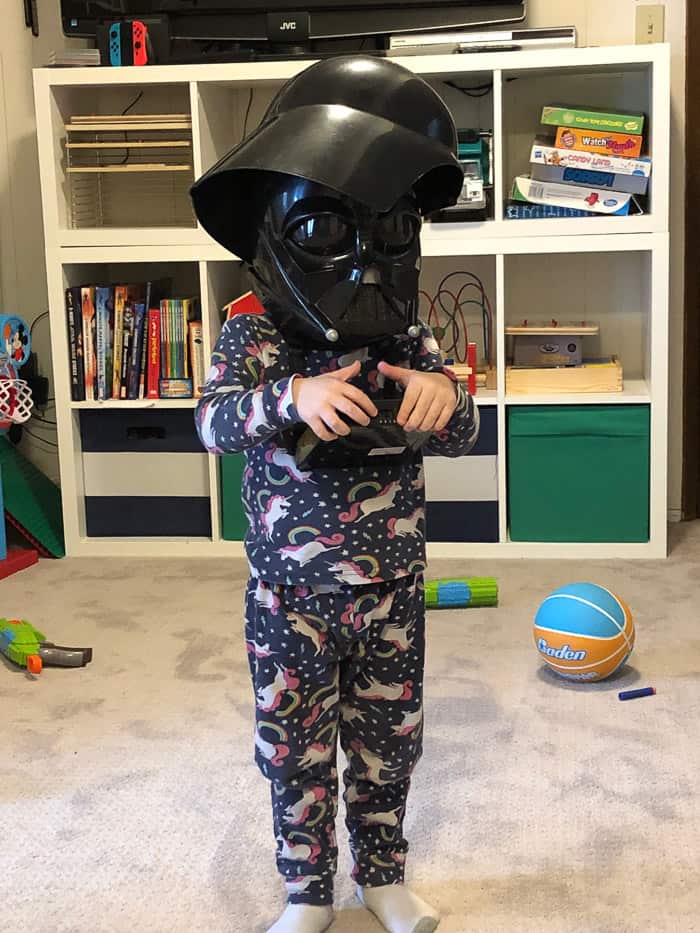 This week’s comment of the week came from Sharon who made our Paleo Salmon Cakes.

I used 2 cans of salmon and dialed back on the other ingredients as well. These are now my go-to salmon cake recipe! I’m now sad I didn’t have more salmon to make a full recipe and have some leftovers. Thanks so much for this keeper! 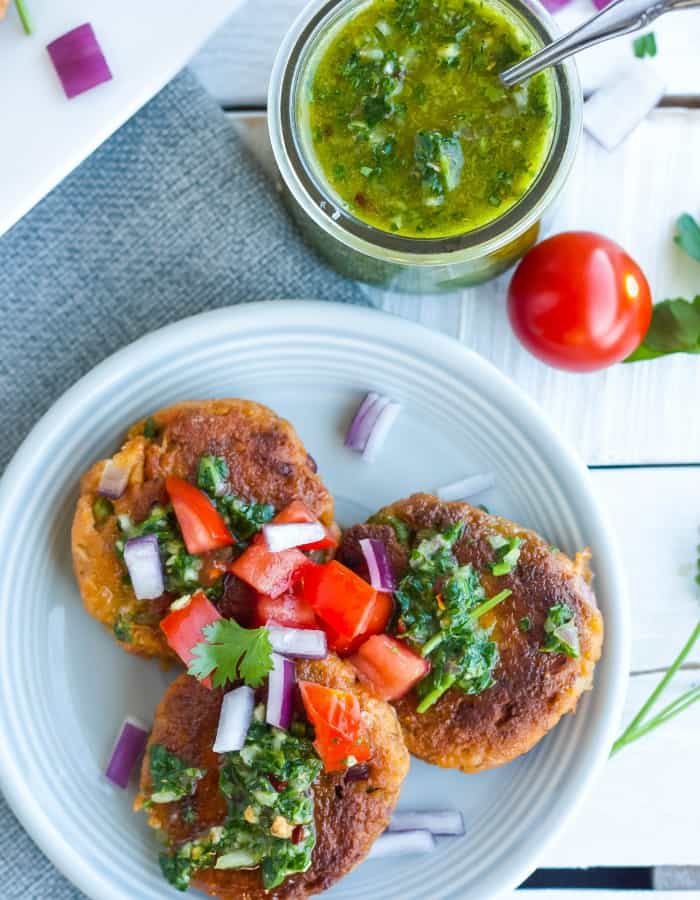 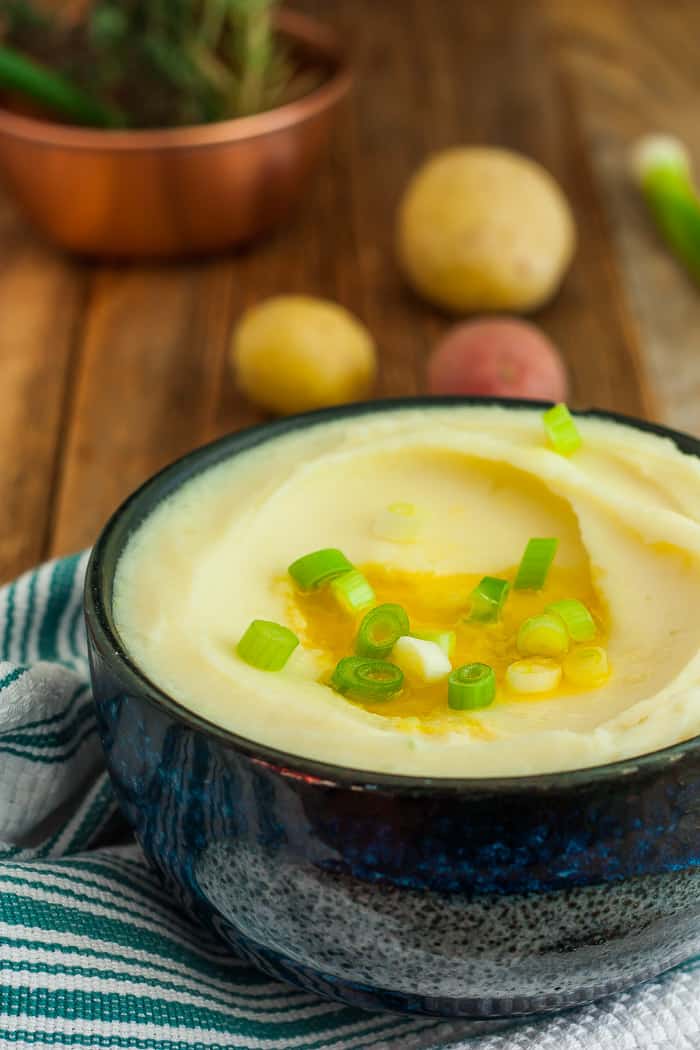 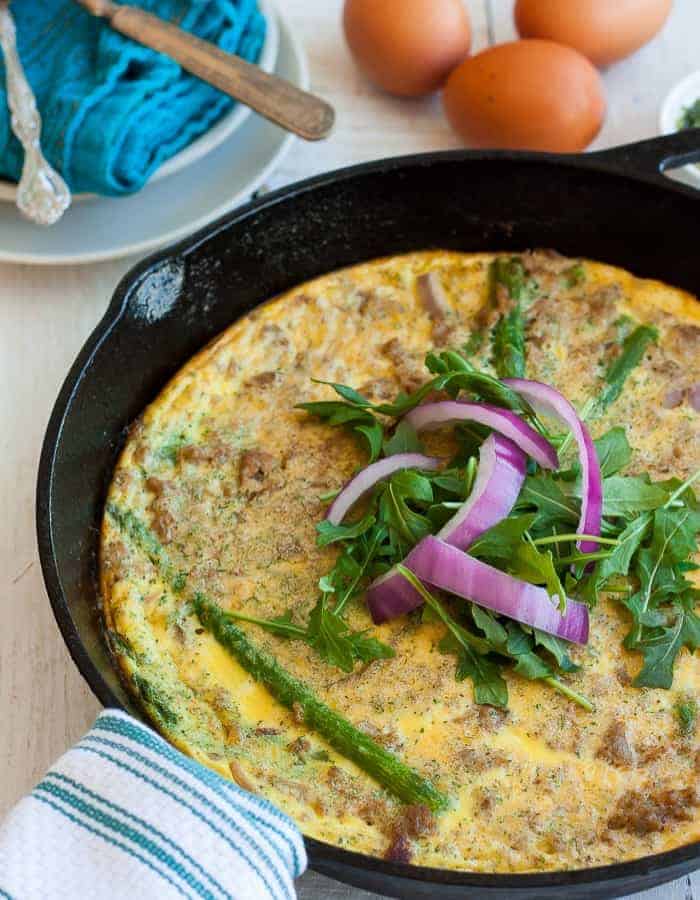 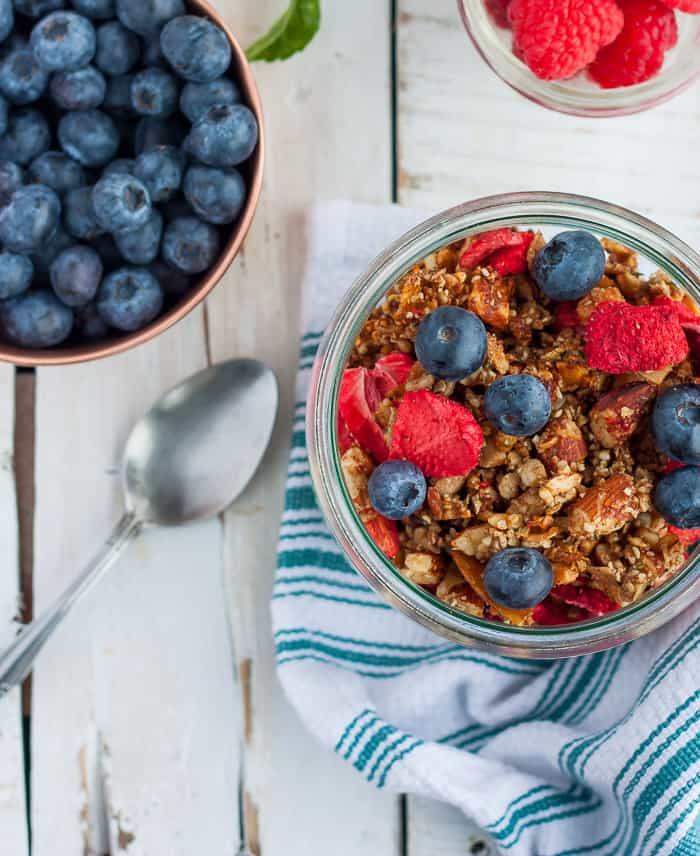 Our milkman couldn’t come this week due to the snow, and we basically ate from the freezer and pantry. Barely made a dent!

What did we eat? I made breakfast sandwiches, Whole30 Beef Stew, a chicken soup that was just odds and ends of veggies, leftover chicken, homemade bone broth, and a version of Crispy Oven-Fried Gnocchi and Veggies with what we had in the freezer and pantry. And because there isn’t already enough soup in this world, I made Whole30 Tomato Soup.