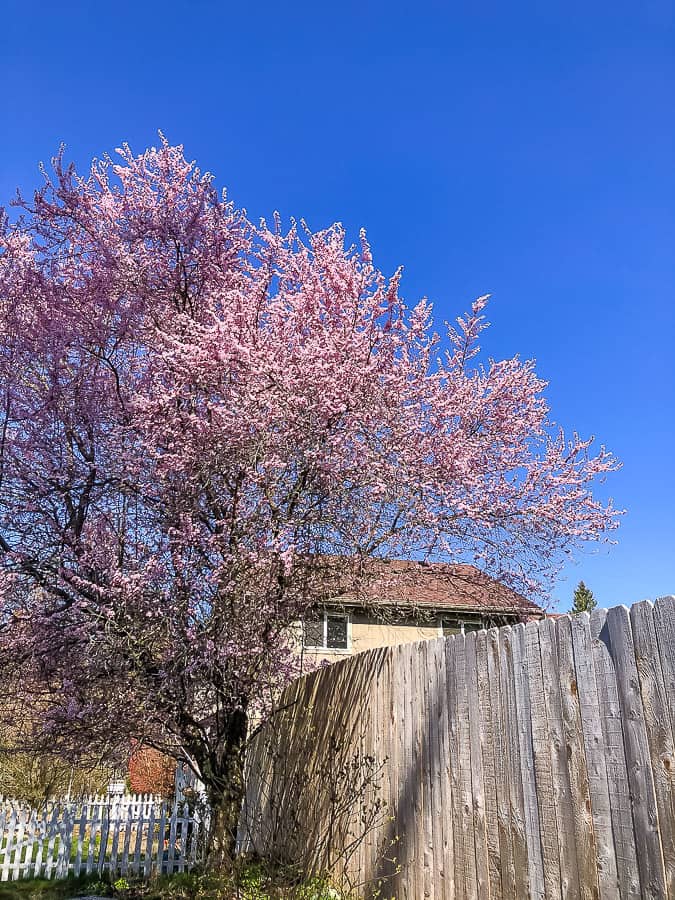 Do you know what this whole self-quarantining situation has taught me? One, I do not understand other people’s buying habits. Have people been purchasing 1-3 rolls of toilet paper at a time forever or something? We always have a 1-2 month supply at our house. Always. It’s how I was raised. We were paper preppers before it was cool.

And two, I LOVE TO TOUCH MY FACE. Holy smokes, touching my face seems to be my favorite thing in the whole world. How did I not know this before? Touch, touch, TOUCH.

What bananas things have you learned in the last two weeks (which actually seems like 400 years)? 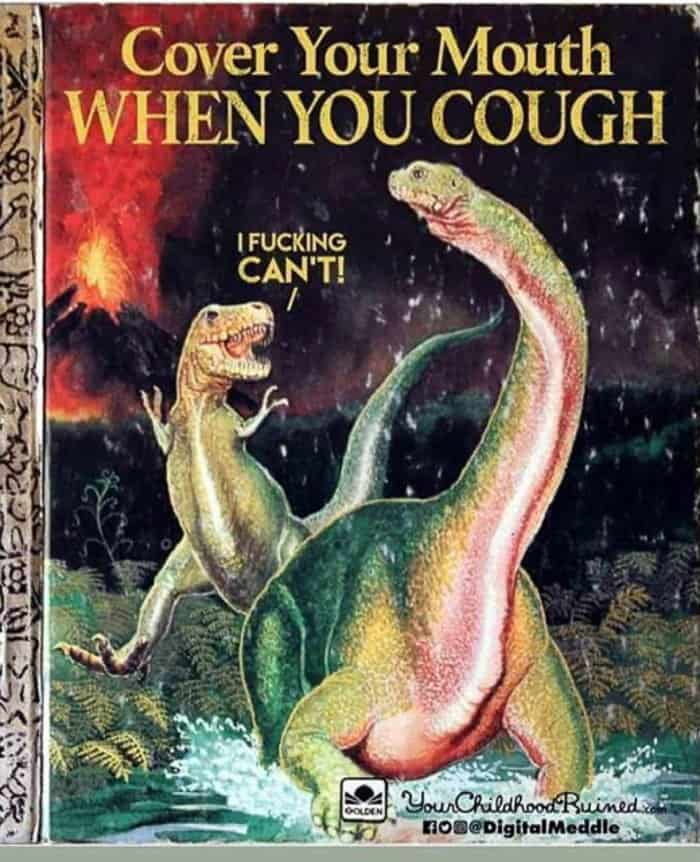 This was week one of working from home with two new “colleagues” on staff. Our HR meetings consistent entirely of “don’t touch your brother” and “are you two seriously fighting over who gets to play with the laundry basket”?

And if this were a real company I would sue for sexual harassment since one of them keeps running into my butt with their head and rarely wears more than a pair of underwear around the office. It’s like working with a pervy goat. And there is sooooo much mansplaining happening while I am trying to work. 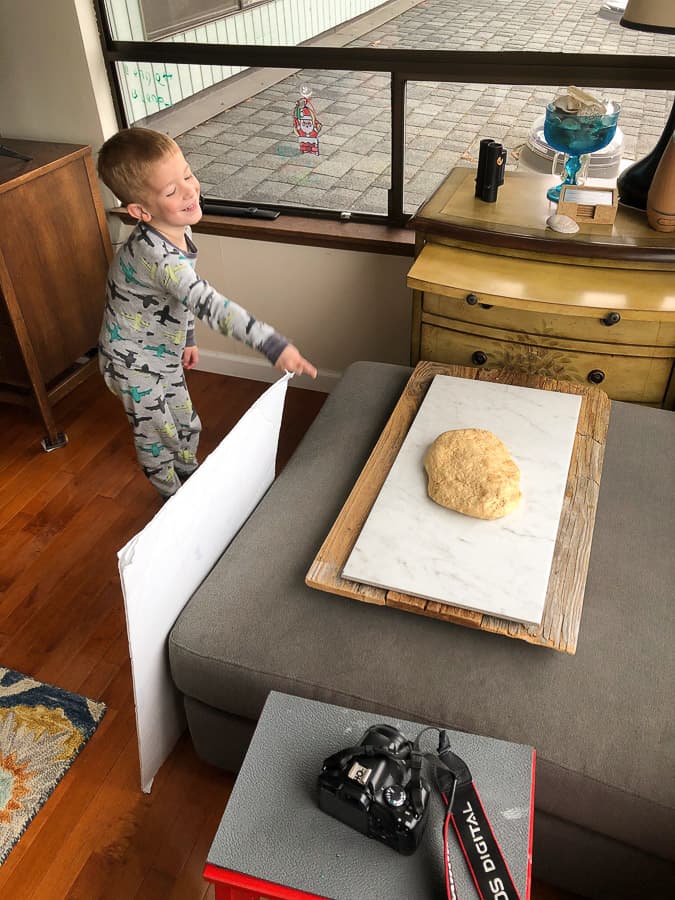 As we don’t have a real curriculum that we have been told to follow, it appears we’re now doing something that could be called “unschooling”. Which I would never ever ever do in my normal life, but 10 days ago normal life stopped for much of the country.

Jack has a math packet that he has already done, and that was all we were provided. His highly capable teacher has sent out electronic packets that we’ll start tomorrow. He is also deciding on an “independent learning project” that will be self-directed. I invested in Kindle Unlimited (first month is free) at the start of the week, and between that and our library ebook system, that child is in book nerd heaven.

Bennett has already chosen an independent learning project. He is learning about hermit crabs, with the end goal of trying to figure out if they poop and what does it look like. He is also doing his best to use up my supply of baking soda and vinegar for daily “volcano experiments”. At least there is one section of my kitchen counter that is VERY sanitized thanks to the vinegar. Four-year-olds are interesting self-guided learners. 🙂

I used to work late into the night after they went to bed, but I am finding having them home all day has worn me out by their bedtime. I’m still getting up hours before they do and finding that work time to be the most productive. On the days that Troy is home, we have set up a “quiet time” zone in the basement. We each get two hours down there uninterrupted to be away from the kids.

Troy installed our Amazon Fire Stick on the TV and takes some much-needed chill time. I take my laptop down and just hammer away as much as I can as time allows. We’re also each taking one hour a day for exercising outside without the kids. 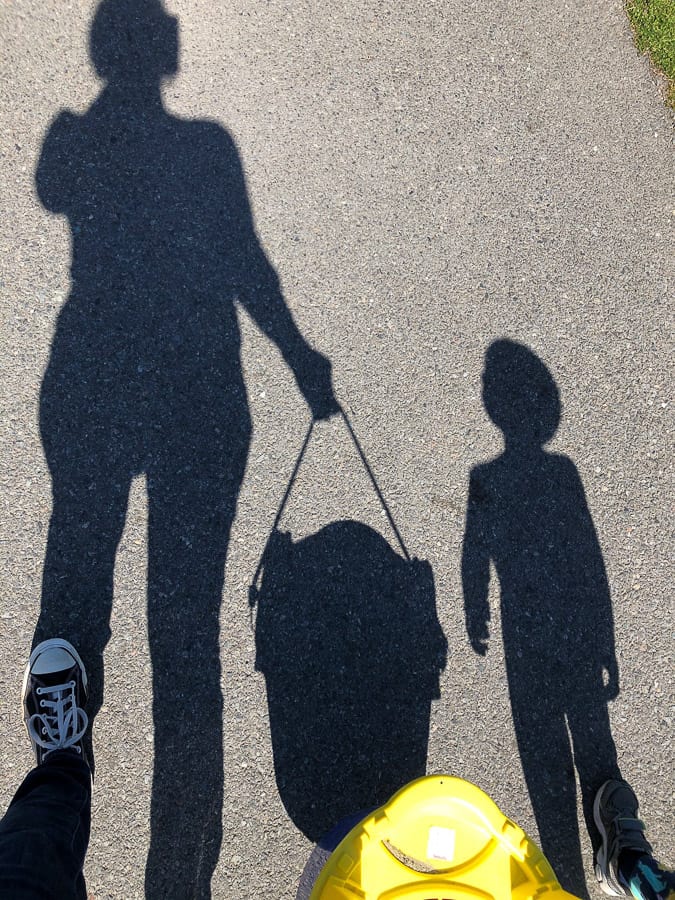 A few weeks ago I downloaded a couch to 5k app and am using that for some simple guided training. Some days I take the boys with me and we “pick up” one of Jack’s friend’s along the way. He’s on our walking route and one of four boys at home. He gets to see new faces, Jack gets to talk with a friend (from a safe distance, of course), and his mom has a 25% reduction of testosterone at home for about 45 minutes. 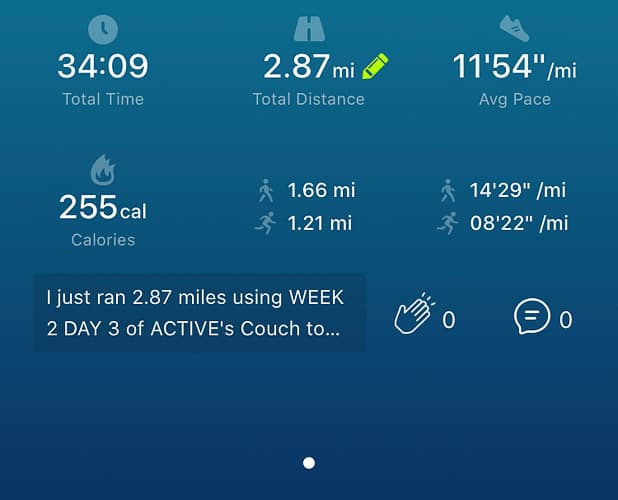 The stroller definitely slows down my total time, but Jack and his friend are the two fastest boys in their school and are definitely giving me some goals when it comes to speed. And then we “drop off” his friend at his house and chat with his mom across their lawn. I think it works well for everyone.

We’ve had to cancel a few planned trips for this spring. Always a bummer, but we totally understand it is necessary and very much a first-world problem. So instead, we found a map at a playground and “visited” different friends around the country. 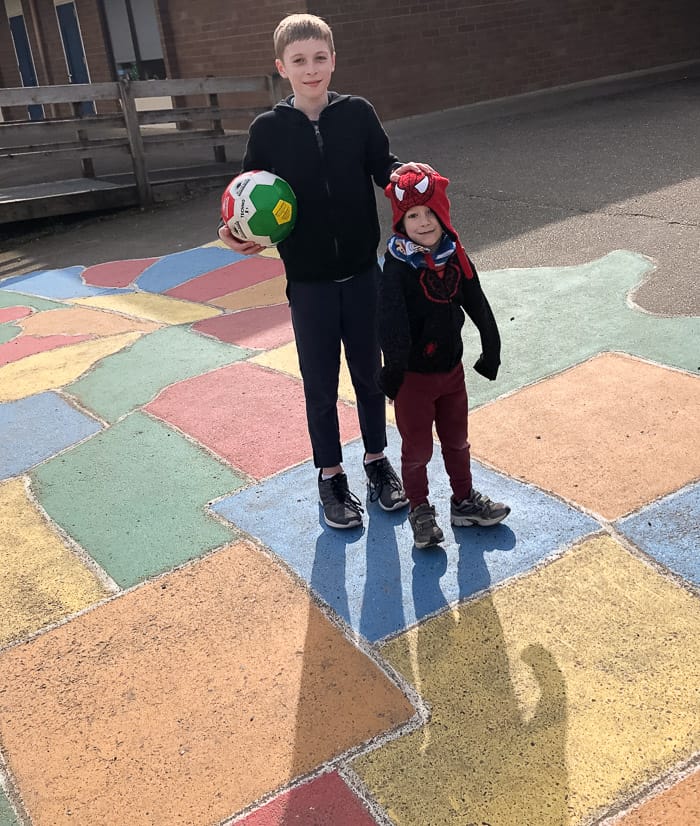 For the parents out there, how are things going for you? Are you doing a structured or unstructured set up at home? How much are you drinking? HA!

Our school district has started drive-through to go boxed meals for any kid under 18, and it makes me so relieved for the families who depend on this food. Now more than ever no one is immune to needing assistance and grace.

I’ve been incredibly grateful for the weather we had this week. Even though the mornings were quite chilly, the sun has been shining allowing us to get outside. I know not everyone is as lucky. 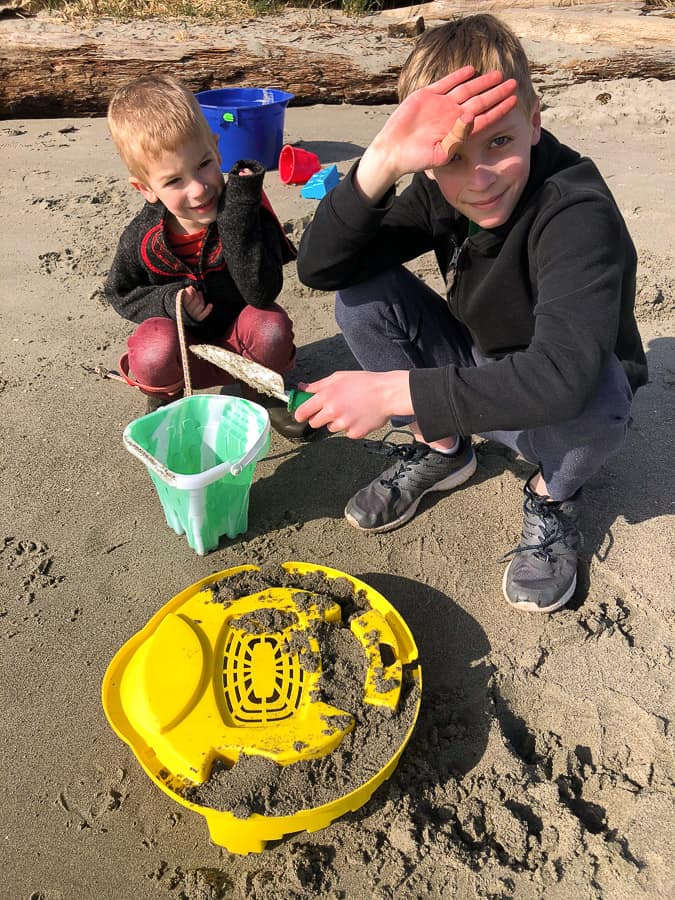 Even though temps weren’t very warm, I busted out our clothesline for the earliest outdoor drying I can remember! The weather this coming week is not looking too promising, so ish might be getting a little like The Shining very soon.

We often dry indoors during the colder months (we have three of these giant folding racks), but man oh man, I love using the outdoor line. It’s soooo much easier, and even though temps are only in the 40’s, I can still dry at least two loads a day. I bought our clothesline over five years ago as my own mother’s day present (yep, I’m weird), and I’m still so thankful for it. 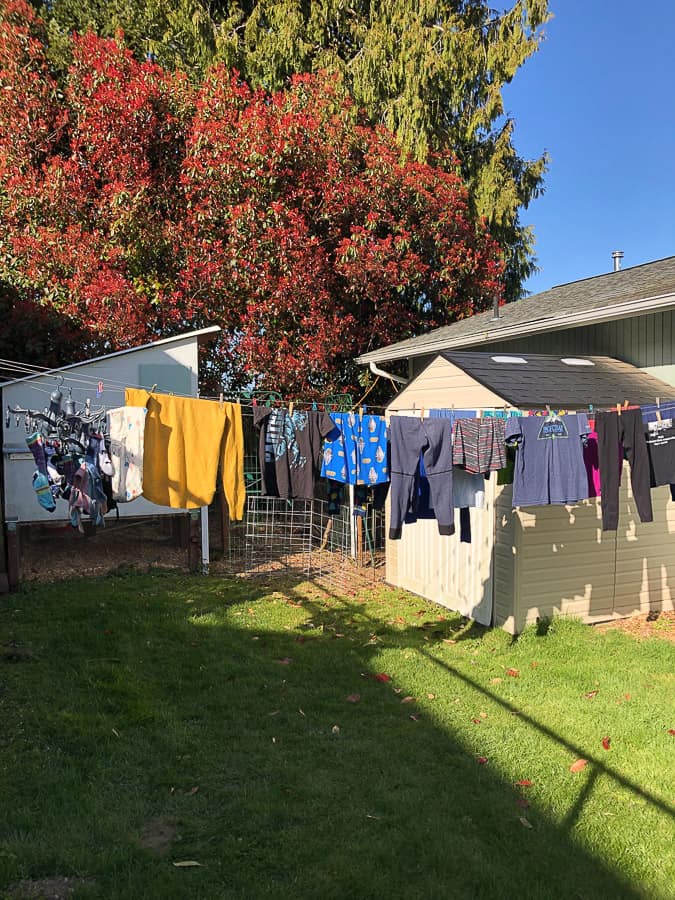 On the blog front this week, I installed something for you guy and would love any feedback. It’s the new search bar you’ll see on both mobile and desktop that shows related posts. It also lets you “favorite” a post so that you can easily find it again.

Honestly, it does nothing for me, and in three weeks I have to start paying for it. So if you’re not all in love with it, let me know. It is meant to better tailor your search and “saving” ability and it’s 100% user-driven. If it is awesome and helpful, then I’m totally fine with keeping it.

Hey, are you following me over on Instagram? I’ve been posting daily in stories tips on little ways to get involved with helping others no matter your budget (even if it is $0). I heard a great quote recently: “make yourself useful or get out the way”. Come on over and join us!

After twoish months, I finally finished watching all eight seasons of Monk on Amazon Prime. I was lost trying to think of my next series, but then I saw they finally released another season of Homeland on Hulu. And just like that, the decision was made for me.

It’s a pretty heavy show, so I like to watch something funny in-between episodes. Currently trying to decide if I should rewatch 30 Rock or Brooklyn Nine-Nine. A few weeks ago I was really wanting to rewatch The Last Man on Earth, but now I’m thinking that might not be the wisest of shows given the current climate. But maaaaaaan, it’s funny. 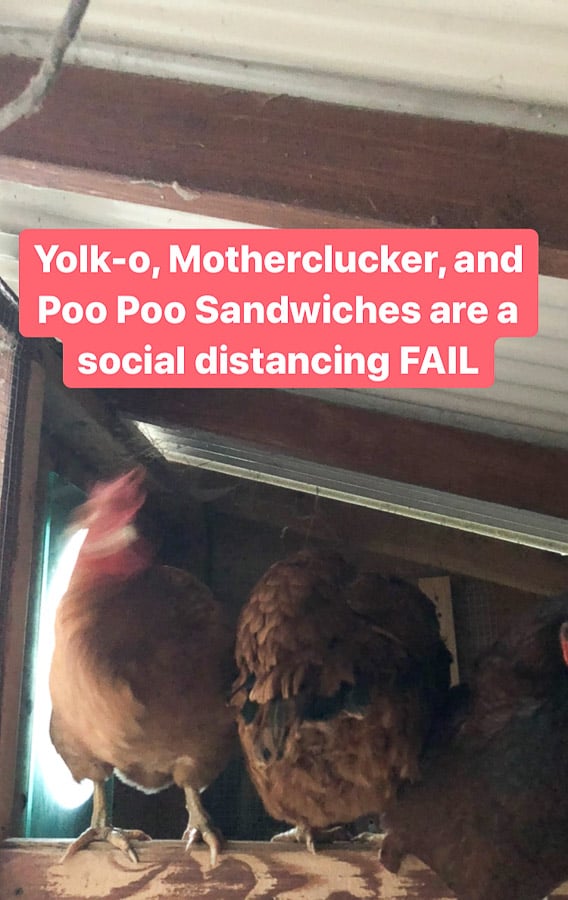 If you are in the US, Azure Standard is still delivering fresh, shelf-stable, and frozen foods in communities. I have an order coming on Wednesday this week! Check out their site and see where the closest drop location is to you.

The podcast Make Me Smart has been a favorite of mine for a long time. They’re now doing daily quick episode to discuss the current state of the world from a financial standpoint. I find their info to always be solid, balanced, and proactive.

This recipe is amazing! I had stew beef to use and thought I’d give this recipe a try. I am blown away by how easy and delicious this was. My husband was so impressed and said we’re adding this to the meal rotation! Also, I made your IP garlic parmesan rice with this (also terrific!!) – and I highly recommend the two together for sure!! 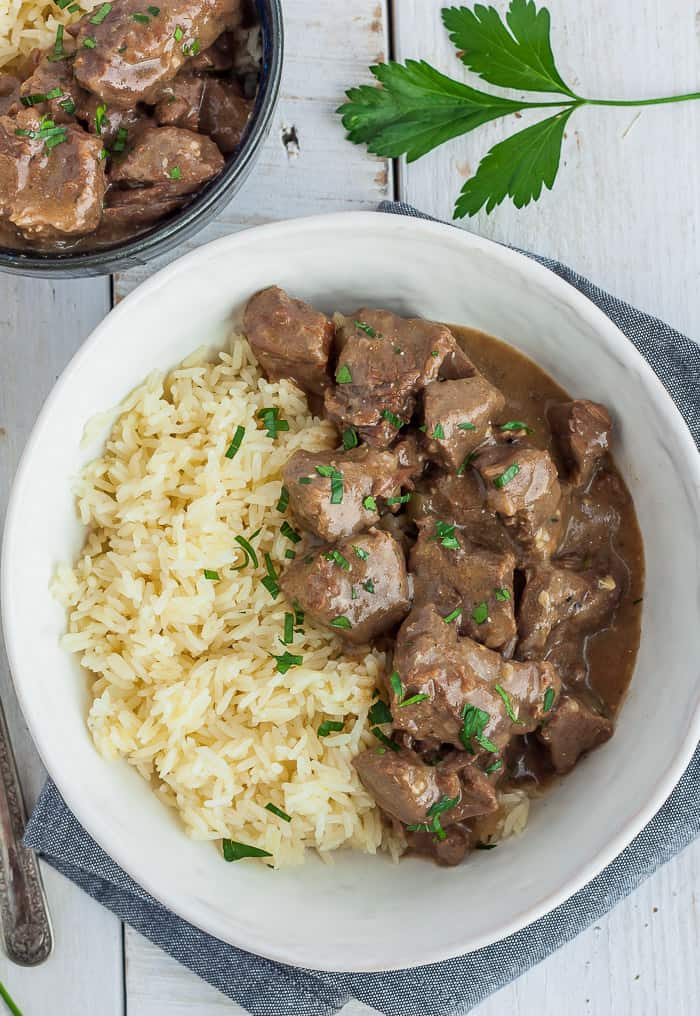 How to Freeze Fresh Produce – Learn all the tips and tricks for how to freeze fresh produce to stock your freezer and prevent food waste. Freezing fresh fruit and vegetables can be accomplished with basic kitchen equipment and without needing special preserving skills. {Pin these recipes} 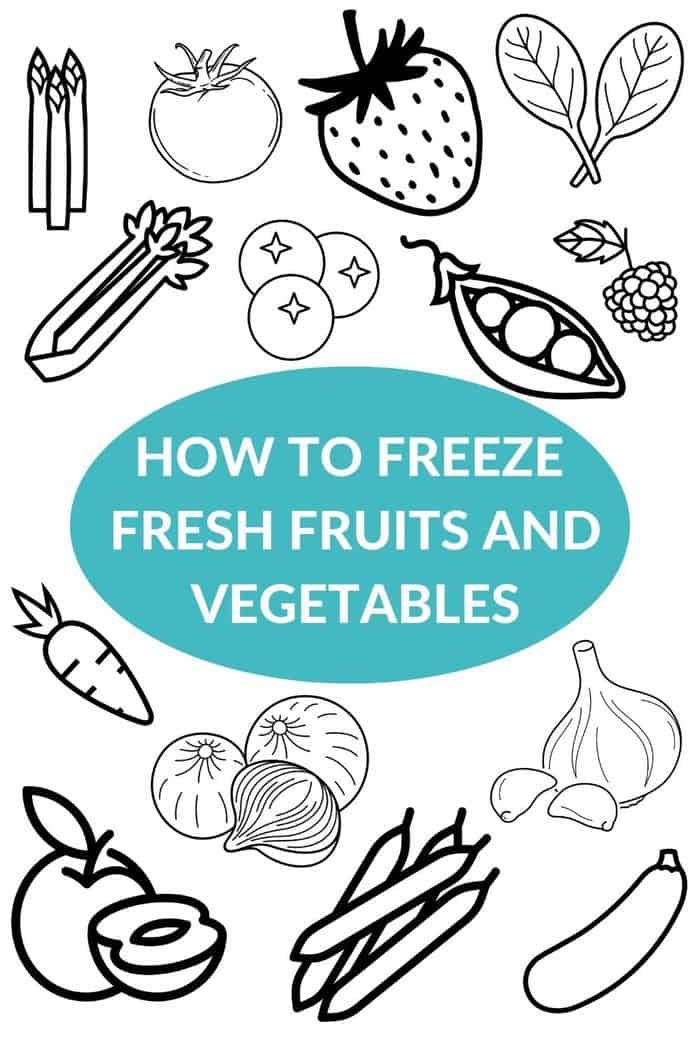 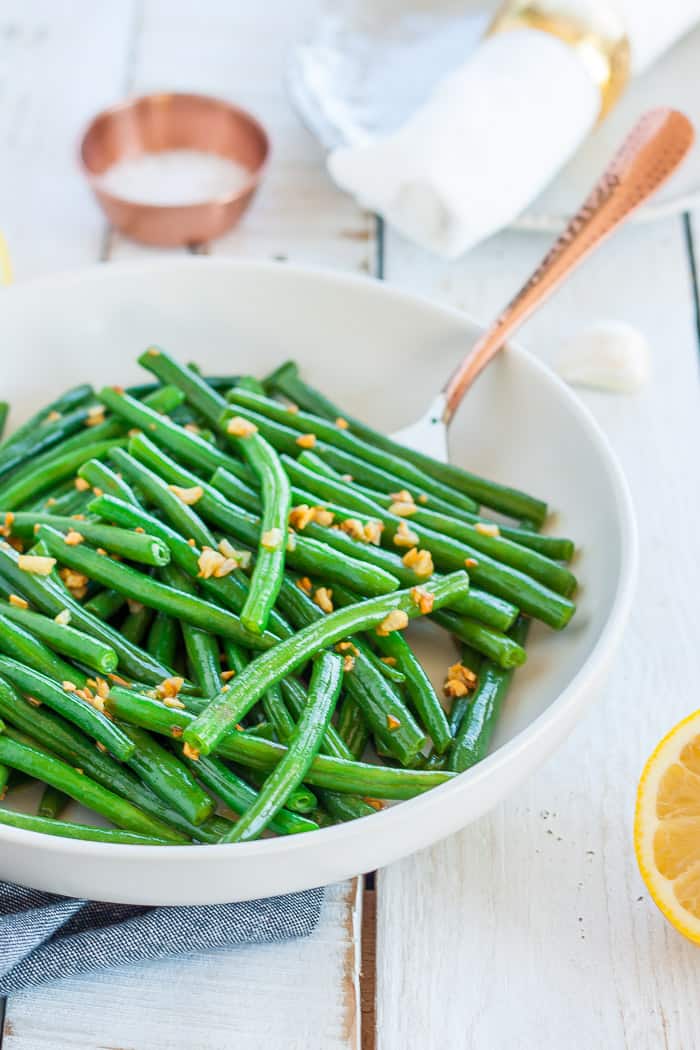 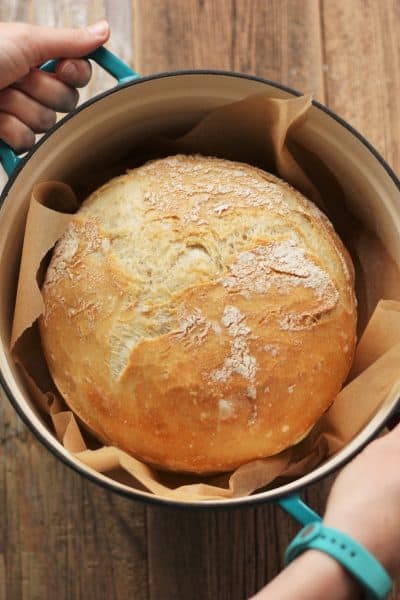 All the cool people match their Fitbit with their dutch ovens.

People were stressed and the non-drinkers were getting LIT this week because the Virgin Mojito was on fire. Here are the other top posts:

Monday:: Breakfast egg rolls. These didn’t happen last week! Probably smoothies with kale from the garden on the side.

Tuesday:: Instant Pot Matzo Ball Soup and salad. We have everything we need for it already chopped up in the freezer or pantry and it’s a quick meal that we all love. Related: How to Freeze Carrots, How to Freeze Garlic, How to Freeze Celery, How to Make Chicken Bone Broth, and How to Freeze Onions.

Thursday:: Takeout. We’re committed to supporting small local restaurants 1-2x per week. We usually bring our own glass containers when we do takeout, but we realize in this day and age that’s not safe. We’ve found a few places that have compostable to-go containers and that is a start!

Saturday:: Butternut Squash Chili because we have everything, it’s filling, and I need to photograph a recipe that goes with it.

This post contains affiliate links and we may earn a commission at no additional cost to you if you click through and make a purchase.