Whomp. Whomp. This guy broke his arm this week. 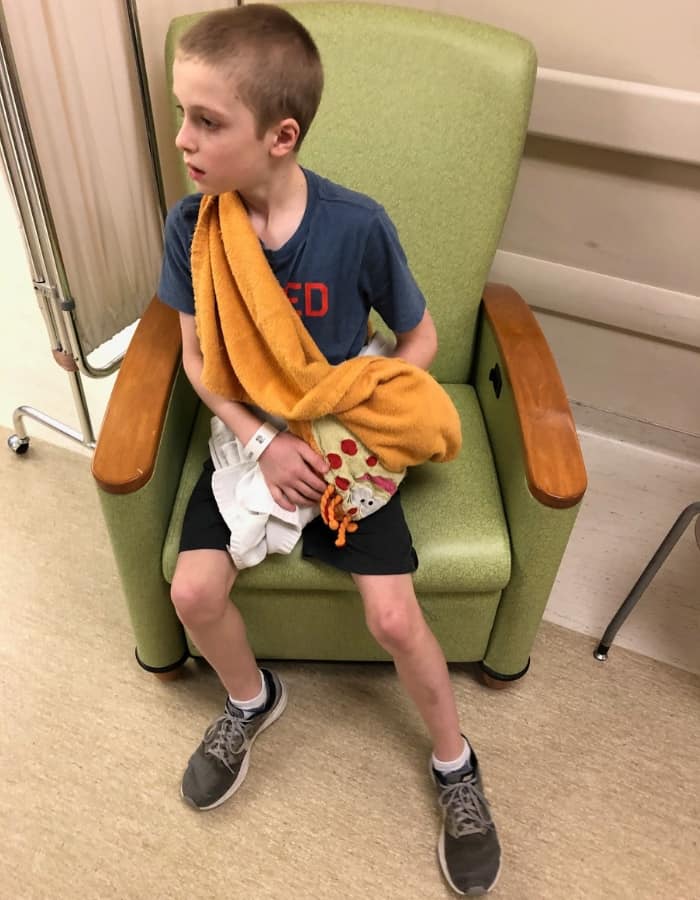 Every Sunday that Troy is not at work he will take the boys to the YMCA for swimming, and then they do the Costco run and hit up Target if needed. That gives them some boy time and it gives me 3-4 hours at home alone in silence to get some blog work done.

I can knock out 2-3 recipes or just really hunker down and get shit done on the admin side.

Well, last Sunday the boys chose to not swim but just wanted to play at the indoor play structure and adjoining kid gym. There had been a birthday party earlier in the day and a bunch of obstacle courses made with big foam blocks had been left out.

Jack is taking parkour courses at a local gymnastics gym and kept leaping over some of the foam blocks at the Y. He dove over a huge foam circle once and did an awesome (by his own account) tuck and roll and decided to try it again.

Troy said he saw the whole thing happen and knew the wrist was broken as soon as Jack landed.

Longtime readers know that Jack has zero chill when it comes to injuries and illnesses. Zero. But Troy reported he only cried a little bit and was pretty composed at the ER.

I went to the ER to pick up Bennett who was bitter that he hadn’t been able to go to Costco and have samples. Yes, I wanted to stay. But have you ever tried to keep a two-year-old entertained at an ER?

Everyone was happier I took him out of there. And yes, we went to Costco.

Are you impressed with Troy’s DIY sling? It had just been mostly removed when I took this photo, but his wrist had been stabilized with Jack’s swim towel and a sling made out of Bennett’s and packed with ice all around. If MacGwyver were a firefighter. With big freak calves.

He broke it in two places and was given some meds and a splint. We woke him up every three hours that night to give him pain meds. Forty-five minutes after his 5:30 am dose he came out to the living room to ask why we hadn’t given him any meds that night. #strongstuff

He decided to be med-free after that point and seriously has been a trooper. Except of course when it comes to the itchy factor. He has kept us up until late for the last few nights because of all the desire to scratch.

We’ve pulled out every bag of tricks we had (we built things with Legos, zip ties, chopsticks, etc.,) but nothing really moved the needle.

His permanent cast was scheduled to be put on Friday morning at children’s orthopedics. The doctor informed me that given his style of break, Jack was eligible for a brace instead of a cast and that it could be removed for itching and showering. Winner, winner!!

Unlike the hard cast for 6-8 weeks that we were told about at the ER, Jack can wear a brace as long as he is extremely careful (no comment). And it will only need to be on for 3-4 weeks.

The velcro on that thing is industrial strength and I really had to put my back into it to adjust it for him at home. 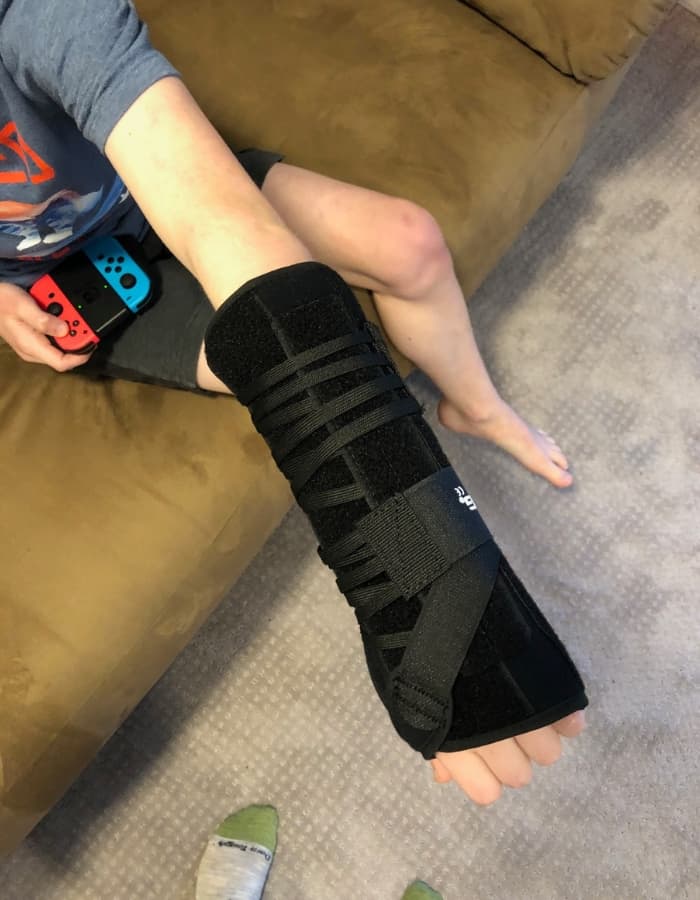 For anyone who breaks a limb in the future, we did find out that there are now totally waterproof casts available! The brand was Aquacast (though I am sure there are also others) and you can shower and swim in it. I called our insurance company and if we did have to go the hard cast route it was totally covered. How is this just now a thing?! We walked on the damn moon already but you had to put a plastic bag over your arm to shower?

In other news, I have an almost three-year-old for sale! I’ll give you a good price.

Dear God, the whining. So.Much.Whining. Despite being fully potty trained for months, Bennett randomly decided last week that he was scared to poop on the potty and thus decided to just not go anymore (we offered him a diaper instead).

As his belly grew, the whining reached epic and very puntable proportions. Given our experience with Jack as a three-year-old, I already think that age leads to certain Satan-like tendencies. But yikes.

We have taken um, control of the situation and he finally went to the bathroom and within minutes he was back to sweet and happy Bennett. But we’re leery the potty terror will continue and we’ll go through cycles where we list him on ebay. 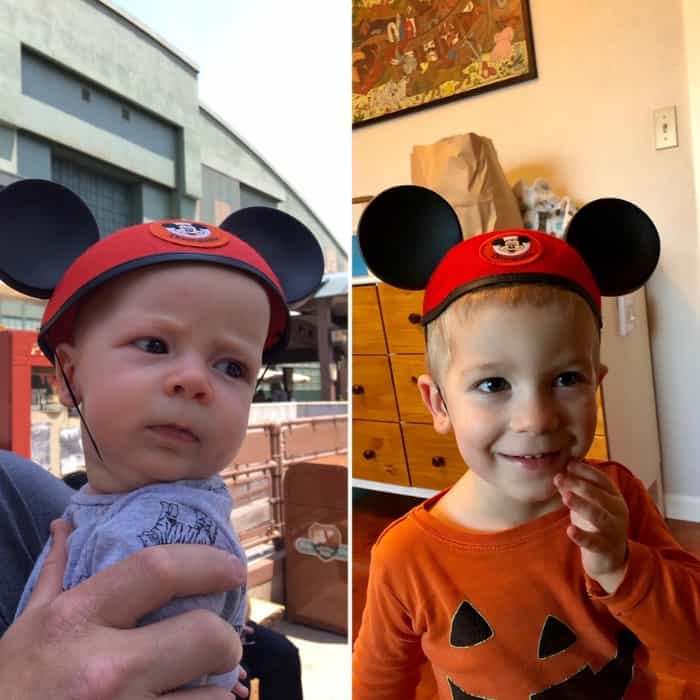 His cuteness is what keeps him safe.

I discovered an amazing and versatile new kitchen tool this week! It’s this little silicone spatula, and while it seems basic, it’s not. Just like guac, it’s so extra baby! Side note, I hate when people say “baby”. I want to punch myself in the face right now.

I heard Elaine talk about it on the Dishing With Delishes podcast (I was even on her show before!) and thought I’d give it a try. It was true love at first stir. It stirs, scrapes, and does a bang-up job of breaking up ground meat while cooking it. It totally rules and I’m sad I lived life without it until now.

After a delicious but sugary diet of homemade fudge and homemade Almond Roca from December 15th-31st, I’m relieved to be back to normal eating. For me, normal means a pretty standard breakfast of make-ahead scrambled eggs (topped with a shit ton of arugula and an ill-advisable amount of green Tabasco, a strip of bacon (I bake a big batch of it all at once), and some sort of fruit. Sometimes I’ll add one or two Gluten-Free Banana Chocolate Chip Pancakes.

I like a biiiiiiig breakfast, but because everything is already made, it takes me less than 60 seconds to get it on a plate and microwave it for 60 seconds.

Lunch is usually leftovers from dinner the night before or some sort of soup I have hanging out in the fridge. And well, you guys see our meal plans for dinner. I try really hard during the week to keep a nighttime snack to an apple with cinnamon almond butter (sometimes with mini chocolate chips. OMG so good).

And then I go bonkers on Sundays and eat whatever sounds good. And all the desserts. I never see how I eat as restrictive or following a way of eating, but it’s intuitive that keeps me from feeling like crap most days.

Even with it being the rainy season in Seattle, I have been working really hard on walking every afternoon that Troy is home. It’s a nice 1-hour loop that I consider my “lunch break”, but it isn’t just fun exercise for me. It’s more like mental health clarity that I have come to depend on.

Randomly this week I started to run during one of the walks and ended up running a little over a half of a mile. Many of you may remember that after my mom died I vowed to run 31 miles in October (2017). Having random challenges or projects is how I distract myself from reality, so you know.

During that month I tracked my time and made it a goal to run a 9-minute mile. Which I did. I always worked to improve and get faster and better.

And I ended up quitting at about 19 miles in because my Achilles tendon was making me scream when I leaned back on it.

This time? I run until it doesn’t feel interesting or fun anymore. Some days I realize I went a little faster than the previous day or maybe got a bit further, but I don’t track it and honestly, I don’t care what my “stats” are. I’m just doing it for the sake of doing it and seeing how it goes.

Ohhhhh, the most amazing thing ever happened this week! Troy and I agreed on a design element in our house. It.NEVER.Happens. Which is why 95% of our house is grey, white, or light blue (except my bright and bonkers Harry Potter sewing closet).

Our area rug that we love dearly was getting pretty busted thanks to having booger-picking children. I found one at a (regional) store and it was 30% off and then an additional 10% off (Only $130 with tax!).

And Troy actually liked it. And there is color!! I should buy a lotto ticket. 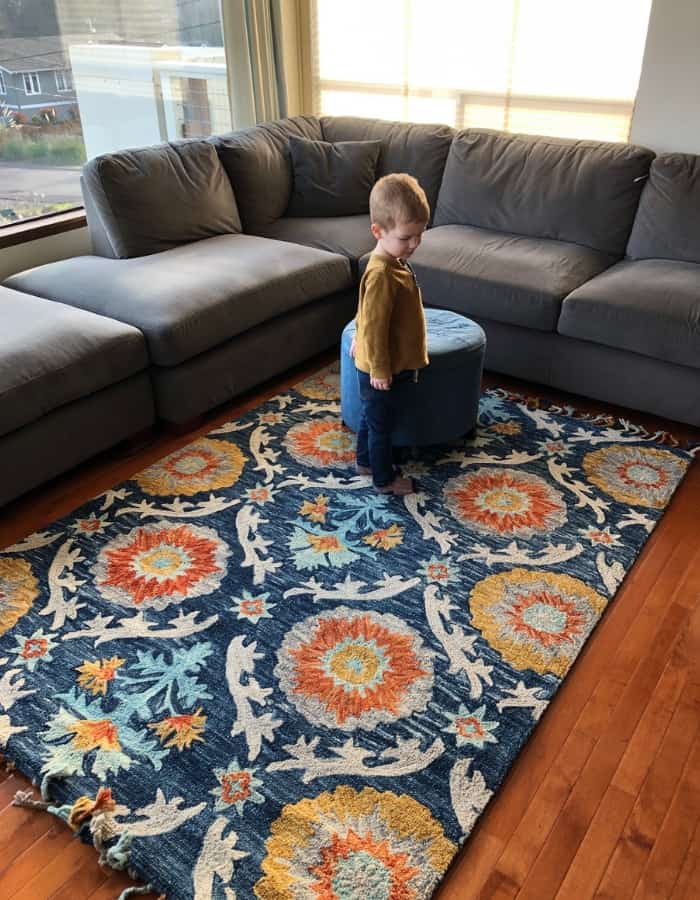 ^that super comfy (and gray. of course) couch is from Costco and is almost four years old. It’s held up so well to kids and is so cozy. The big square footstool on the far left of the photo is where I take 99% of my food photos thanks to our huge windows giving me great light. I’ve legit spilled 1/3 cup of olive oil on that thing and wiped it off. Costco couch for the win!

The comment of the week comes from Megan who left a five-star review on Roasted Brussels Sprouts With Garlic:

OMG!!! I made these last night and they were AMAZING!!! My husband is an incredibly picky eater who usually only eats canned veggies and canned fruits, but he actually ENJOYED eating these!! This recipe has definitely been placed in my tried & true recipe book!! Thank you for this amazing recipe!! Happy New Year to everyone!! May it be blessed!!

Yahoo Megan and yay for winning over picky eaters! 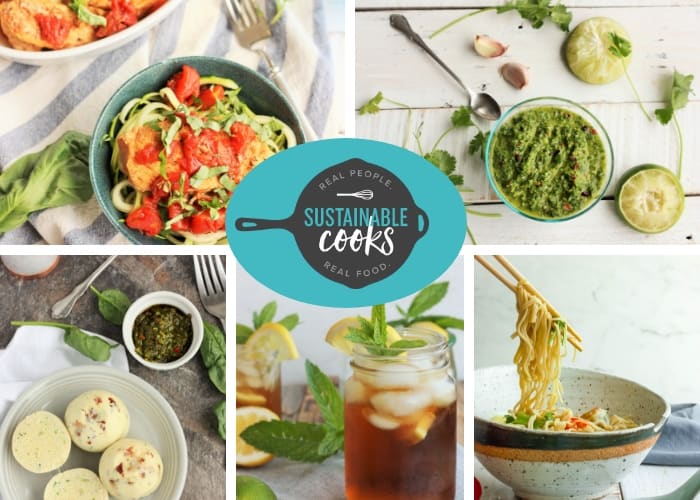 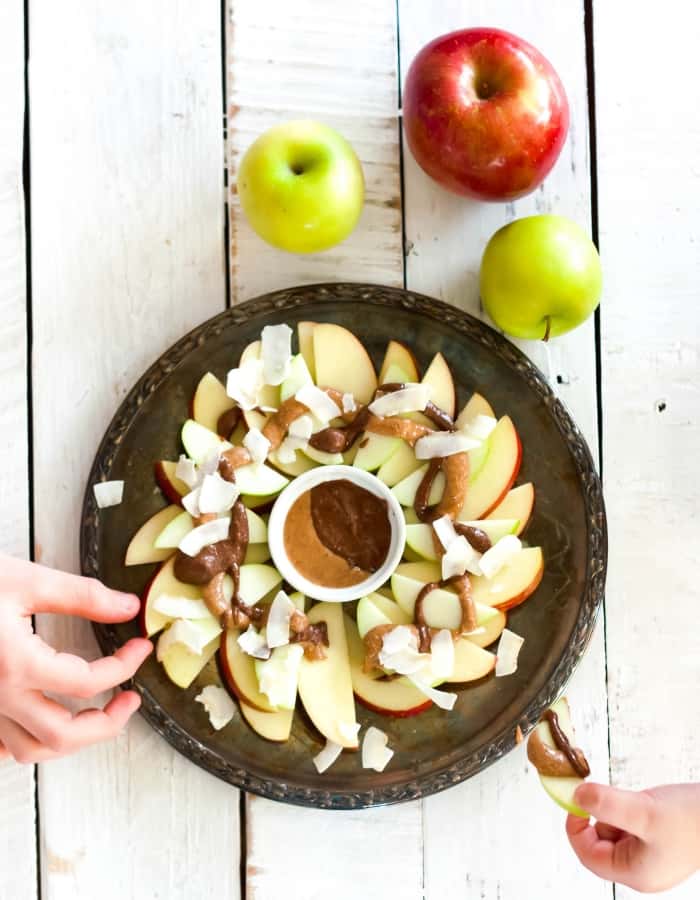 21 Easy Whole30 Dinners You’ll Actually Want to Eat – 21 easy, healthy, and compliant Whole30 dinners that you’ll actually want to eat week after week. 21 delicious quick recipes that can be made in the Instant Pot, crockpot, or stovetop.   {Pin it} 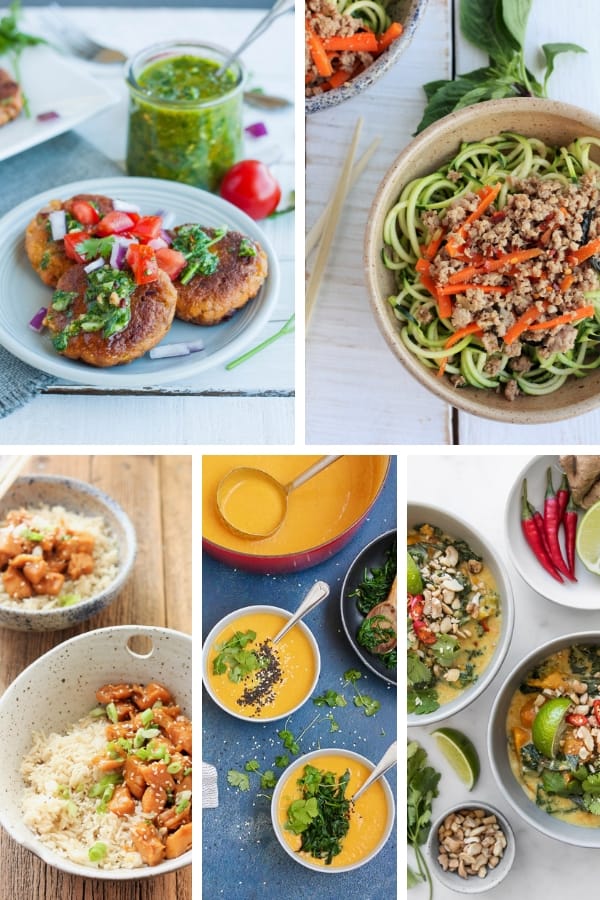 Hop in the DeLorean

Tuesday:: New recipe I am working on. Secrets are fun!

Friday:: Out. We started a tradition last year to go out to my mom’s favorite (crappy) Mexican restaurant on her birthday.

PS. “What We Bought This Week” should return next week. With the holidays and broken arms and a general feeling of laziness, we have been terrible about remembering to get photos.