I have currently declared war against a spider in our chicken coop. Spiders and insects inside my home are fair game in my opinion, but once I’m on their turf, I have a bit more respect. This freaking spider is up in my face every time I go in and out of the coop to refill the water or food, or simply let them out in the morning. He built his web right in the middle of the doorway, so I tried ducking down. Then that eight-legged ahole lowered his web and laughed while I floundered and ripped webbing off my face. There are other corners of the coop where he would be happy and undisturbed, but nooooooo. Things are about to get real. Real crushing if you know what I mean. 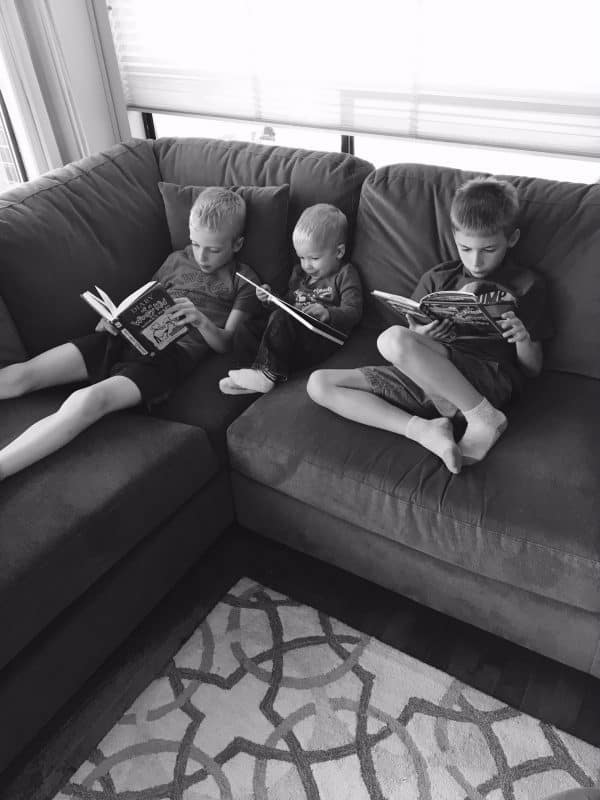 I remember being a little girl and seeing Princess Diana on the tv all the time. She was always at some charity event, visiting an orphanage, or an HIV/AIDs treatment center for children. She seemed like a gracious woman who was as down to earth as her position would allow.

You could have knocked my nine-year-old ass over with a feather the first time I heard her speak. She had an English accent!? Well of course she did. She literally lived in England.

I’m not sure what it was about that situation that made me realize that even though people looked one way, how they really are is something entirely different. And that different is ok. And that perhaps my perceptions about others were based on my assumptions and not reality.

That realization is something that has stayed with me since then and is a lens I try to use to view others. We can all be different, have different beliefs and priorities and still be part of this big world. Maybe it’s just nine-year-old naivete, but I am ok with that. Kids are still innocent and most haven’t yet been taught to treat their fellow human beings with contempt. Let’s all be nine more often.

Dear Target. You need to stock more than xs sizes in this shirt. I neeeeeeeed it!

My dad is off on his next motorhome adventure. He is headed to Central Washington for fishing and camping. He’ll drive back for my mom’s memorial in two weeks and then head back until “my arm gives out from fishing too much”. We’ll miss him and the boys will really miss playing in “their” RV. On the plus side, his apartment in the house has amazing morning sun. So, when he is gone, I park my indoor clothes drying racks in there and use it for line drying on rainy days. And I leave the stroller in there too. 🙂

Dad and mom were always people who were surrounded by lots of stuff. Things were much better when they moved in (less space meant more forced purging, and plus I was like a clutter hawk), but my dad still has piles everywhere outdoors. Makes Troy and I a bit crazy. In his absence, we’re going to be doing some “fall cleaning”. 🙂

Why in the hell has Sir Topham Hatt not fired those lazy ass trains? Thomas, Percy, and Edward are little screw ups. They really want to be useful, but they end up constantly bringing the train yard to a halt. Is there some crazy train union that is protecting these knuckleheads? And don’t even get me started on those troublesome trucks and aggressive cranes. Seriously, who is running the HR department on the Isle of Sodor?! 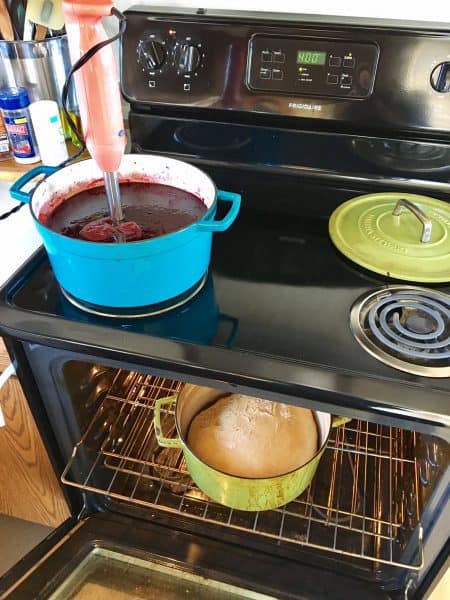 Blackberry syrup on the top, and homemade bread fresh from the oven. Yep, my house smelled amazing. Oh, and that is the worst range ever. Please don’t ever buy it. I hate my oven/stove so very desperately.

As people on Facebook and Instagram already know, the end of this week was a challenging one for Jack and me. Jack has been a challenging kid, even as a baby. I’m sure my mom’s passing hasn’t helped anything, but our problems were there prior to that. I’ve read all the books, tried everything, and I feel like I am screaming into a jar. Troy is experiencing it too to an extent but as the fun parent, he does less disciplining than I do. Jack and I are just so similar in many ways and I am trying to deal with him in ways that my parents dealt with me (that were effective). Life can be really hard sometimes, right? This too shall pass, but I’m exhausted from the process of trying to do the right thing. I want to eat all the sugar. Tomorrow is a new day.

Question for you East coast people. How in the world do you stay up for sports games that start at 5:30 pm ET? Football takes approximately elevenity billion hours, and you don’t even start until 8:30 pm your time. You must be really dedicated I suppose?

And since we’re on the subject, what is it like for you Central time zone people and your crazy start times for network tv? It just seems unnatural to me for an episode of Law and Order to start at 7 pm. Unnatural I tell you. Also, can I say how thrilled I am to have Law and Order back on tv?

I have a super unexciting announcement. Ugh, I hate even typing the words. I’ve decided to run 31 miles in October. I already hate myself for even saying that. I played tons of sports as a kid and was a super fast sprinter. Distance was an issue with me, but I could play a whole soccer game and be fine. At some point, I just stopped doing any running activities. At Jack’s soccer practice a few weeks ago, I was running with one of our slower kids. I was trying to encourage him to run faster by making it a bit of a fun race. I realized in that moment that I am still pretty fast. Not like racing against a slow eight-year-old fast, but actually fast. I won’t win any track and field events, but I still have some speed on me. The 31 miles is more just to see if I can do it. It works out roughly to one mile per day, but I know that isn’t realistic. Which means at some point I’m going to want to punch myself in my own boob for coming up with such a stupid challenge.

Many of you have noticed that I have been busy updating old posts lately. Here is how that happens. Let say I am writing a new post and need to reference an old post. I go back to that old post to get the link to put in the new post. Then I start reading the old post, find typos or something I need to tweak. Then I realize the photos are from the old platform I originally used (Blogger). While they were terrible photos to start with, the transfer over to WordPress made them even worse. I then plan ahead for the week and see when I have time to remake that recipe so I can take new photos of it.

Once I take new pictures, I also realize that the recipe wasn’t easy to print, so I input it into my recipe system to make it printable. Then I decide to rework some of the verbiage in the post. Which leads me to make sure I am using best SEO practices. After I reread it a few times, I realize for example that I talk about a great pan I used or an awesome kitchen tool, but I never linked it. Maybe someone wants to check it out or add it to their holiday wishlists, so I go back and link the items that may be of note.

After all is said and done, reworking an old post takes just as much time if not more as writing a new post. And it is 100% worth it for me in the end. Taking a post that I thought was fine before, and making it something to be proud of has been an exercise in humility and grace. Every single time I take new photos, I find things to critique about them. I don’t have great photography skills (but I am trying) so every new “photoshoot” is painful for me. It is a skill that absolutely does not come naturally to me and is something I am constantly trying to figure out how to improve. I work to improve every time I pick up my camera.

I see a new photo and will critique it as not being good enough. Take this one for instance: 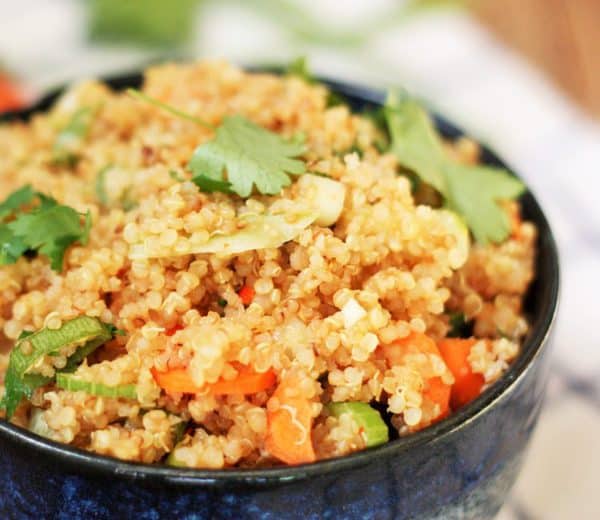 I don’t have good editing software yet, so the colors don’t pop like I want it to.  The background is too fuzzy. I need to work on staging to make food look more interesting. But then I see an old post and an actual old blog photo (which are always super small), and I realize that maybe I have made bigger strides than I realize. 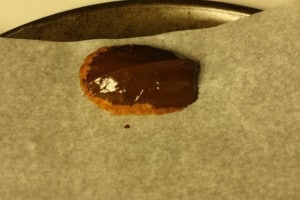 Is it a chocolate-dipped cookie? Is it poop? Who will ever know.

I suppose it is all perspective. 🙂

Tuesday:: Sigh. My crockpot chicken pot pie again. I know the crockpot instructions well, but I am also trying to formulate it for the Instant Pot. I forgot a very important rule about Instant Pot vs. Crockpot (you need less liquid), and last week the dish turned into more of a soup. Oh well. These things happen. Everyone thought it was a delicious soup. Salad with the pot pie.

Wednesday:: Out! Going out for my early birthday dinner because we have soccer on my birthday. And also because kids eat free on Wednesdays at this local restaurant. We’re going to a place where they serve fried pickles. Because I want fried pickles. #logic. I have had good fried pickles exactly one time in my life when I was on a work trip to Nashville. And it was love at first bite. I have not found a good version here since. I have attempted to try them twice at this restaurant – once they were out of pickles, and the second time their kitchen was closed for repairs. So help me, if I do not get to try these fried pickles on Wednesday, I will cut a bitch.

Thursday:: Another new (secret) dish I am trying out for you peeps. It is kinda like a grain bowl, but better. Biscuits on the side. 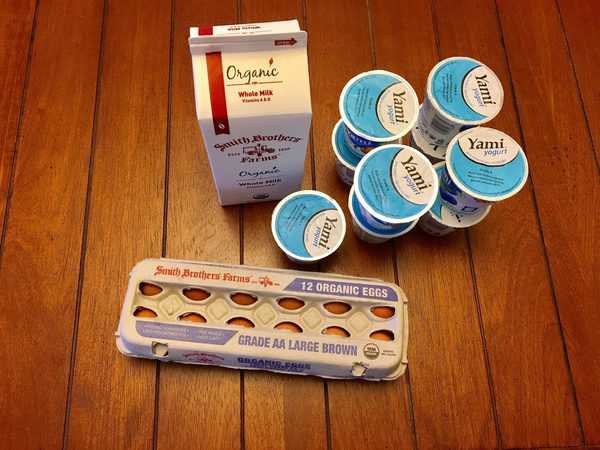 Farmer’s Market – $69 (not pictured a bit ole box of peaches to slice and freeze). Only two more weeks left in the market season and I am stocking up where I can. My pickling cucumbers did terribly this year for some reason, and I bought some to make a few batches of fridge pickles. 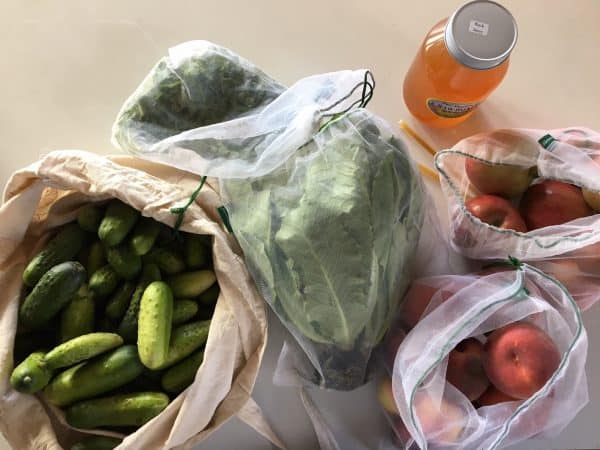 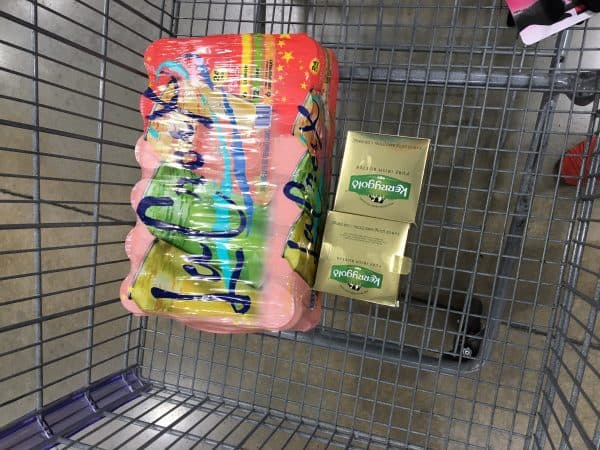 Fred Meyer – $9.87. There were a few side trips this week, but I forgot to keep track of the expenses. 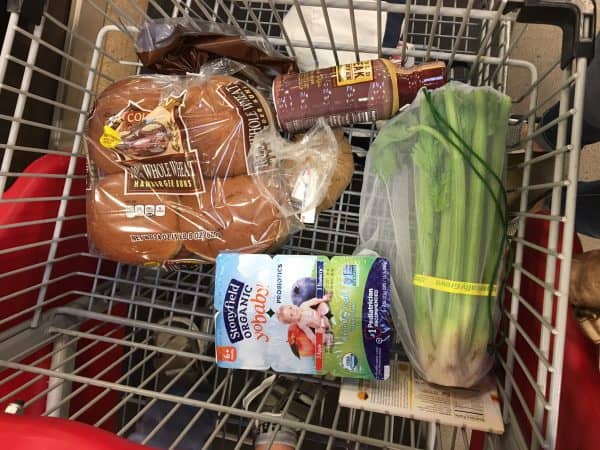 The bottled coffee was the Friday freebie. It had 54 grams of sugar in it. I gave it to Troy. Yogutt was 50% off because it expired within a week.