Well, the “0.0” sticker on the back of my car is officially a lie. Apparently, I am a runner now.

Ha, not really. My 31 miles in 31 days in October challenge is off to a start. Not a great start. Not a bad start. Just a start. Still not enjoying it, but I don’t mind it as much as I thought I would. I start my walking route with the one-mile run and then I’m done for the day. Well I mean I keep walking. I actually ran two miles (not in a row) on Wednesday because I had to make up for a non-running day. Honestly, with weekends and a mini trip to Denver later this month, I’m pretty much going to have to double up most of the next few weeks to hit my goal. And that is ok.

The first time I did the mile I had no idea what the actual distance would look like. I have a Fitbit Alta that I use for my steps and it also tracks mileage. Since I push a stroller, I have to wear the Fitbit on my shoelaces in order for the steps to count. You have no clue how pissed I was the first time I took a 9,000 step walk and it only gave me like 680 steps. Since my Fitbit was on my shoelaces during that first run, I was trying to track my mile by constantly synching to my phone. There was one point where I thought my heart was going to explode and I would pass out. When I finally got to the mile mark, it had been a whopping 14 minutes. 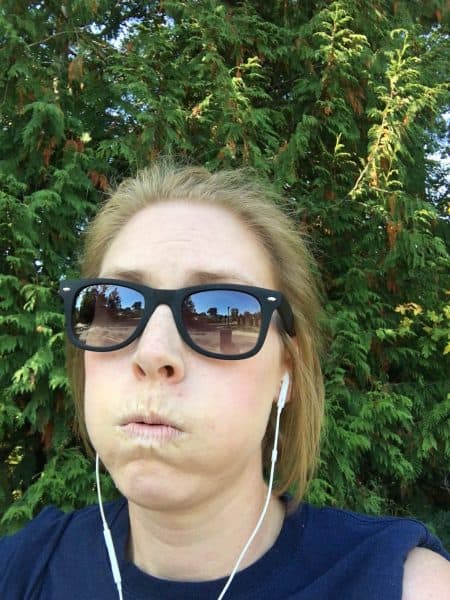 Now I know I haven’t run in forever and a day, but 14 minutes seemed excessive to me. Thankfully, the awesome people on Facebook helped me out and recommended the free app, Map My Run. I felt vindicated the next day when I tracked my mile and not only was the actual route so much shorter than the previous day (and no hills), I did it in 11:04. Jack came home that afternoon from school and announced he broke his personal mile run record in P.E. at 6:53. Whatever. Freak.

I’d like to see if I could get to a nine-minute mile before the end of the month. I have no desire to do marathons or train or anything like that. But I love to challenge myself in small ways, and it is always pretty amazing to accomplish something that I previously thought impossible. Whenever I am at the start of something hard (TWSS), I picture myself on the other side of the task. I don’t think about how much each step is going to suck, or how much I will hate it. I just pretend I have already completed it and I feel what it is like to celebrate that win. It is how I got through two med-free labors. Especially with the first one having a 99th percentile head. I just disappeared in my head and thought about holding him. And of taking a shower. The greatest shower in the whole world.

So maybe a nine-minute mile within the next 23 days. We’ll see. It’s fun to try things. 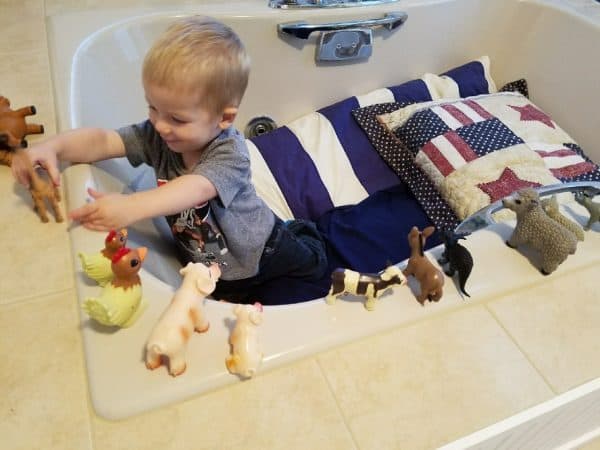 Getting spoiled at the in-laws

My in-laws took Bennett on my birthday, and let me tell you I was out doing some crazy shit without a kid. I went to my favorite grocery store because they do free knife sharpening every week. I then went and got some chicken food at the feed store. Then a pedicure, Trader Joes, and a few hours of work at Panera. It was like a Girls Gone Wild Video. I’m assuming?

The day before my birthday we went out to dinner, and I finally found a restaurant in our small town that does fried pickles correctly. They were dill (sweet pickles are the devil’s ferment), super crispy, and served with a spicy dipping sauce. Now I need to forget that the restaurant exists for another six months. Let’s be honest; one doesn’t need fried pickles all too often. 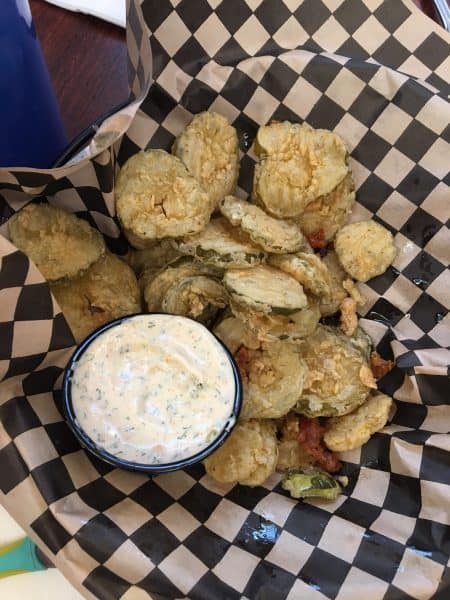 We all woke up last Monday to the horrible news about Las Vegas. I feel like the coverage and our reactions are all on auto-pilot at this point. Too much violence and too many deaths in the last few years. One life lost is too many. I am still processing the horrible tragedy as I am sure most of you are. I will say that as a family that owns multiple firearms, I don’t have a single problem with smart legislation to fix the issues we have in this country. I say smart because I am tired of politicians throwing shit at the wall to see what will stick. We need to stop putting band-aid solutions on the table and sit down and have the uncomfortable conversations that no one wants to have. The second amendment is alive and well in my home, but so is reality and common sense.

My mom’s celebration of life is tomorrow. I think we’re ready for it to be over with, and at the same time, we don’t want it to ever happen. Once it happens, that means things are real. Troy made a beautiful slideshow with photos for the service. It took forever for my sister and me to choose the pictures and the song. I think delaying was our coping mechanism of choice. My mom loved music that I would classify as…crappy and very soft rockish. Nothing from her CDs seemed to fit the occasion, so instead, we went with this song from Michael Buble. She loved him and he doesn’t annoy me. So I have that going for me at least.

Troy did a great job with it, and I keep watching it a few times a day. I have this idea in my head that if I inoculate myself against it, I will be able to hold it together tomorrow. I’m also speaking and reading a tribute/eulogy that I wrote for her. I think it goes without saying that I’m not going to be wearing mascara on Monday. I have blonde eyelashes, so I’m going to spend the day looking like a naked baby mole rat. It’s going to be fiiiiiiine. 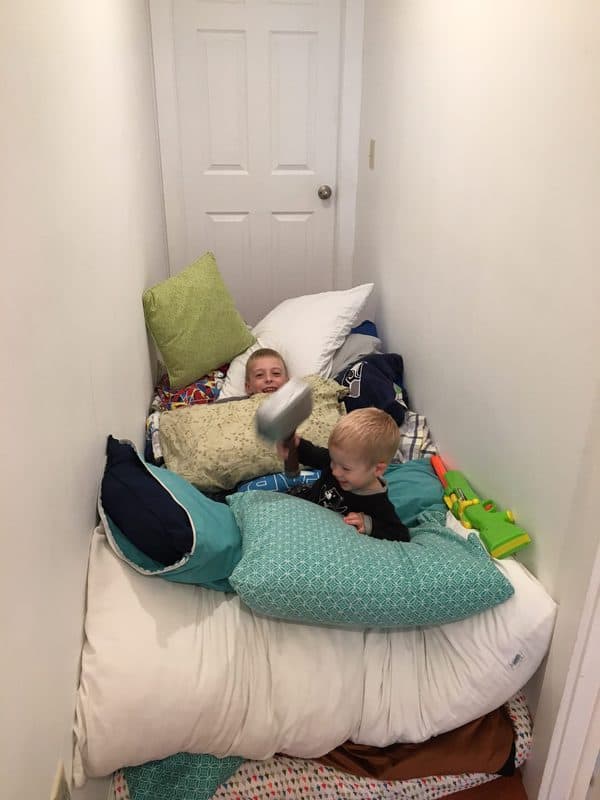 If you missed any post this week, let me help you catch up! Monday was “My Day With Justin Trudeau“. Wednesday I shared our Halloween tradition with you and told you about The Candy Fairy. Thursday I finally (does the Dance of Joy from Perfect Strangers) was able to publish my Crockpot (or Instant Pot) Chicken Pot Pie recipe. This beast pissed me off. I had the crockpot version down pat, but could not get the Instant Pot part juuuuuuustright. Thankfully, even though it took awhile, all the versions were tasty. Friday I shared my mom’s Nordy Bar recipe. I have to make another batch this evening for the memorial tomorrow. It makes my hair smell like marshmallows and butterscotch while I make it, and that should always be a thing. 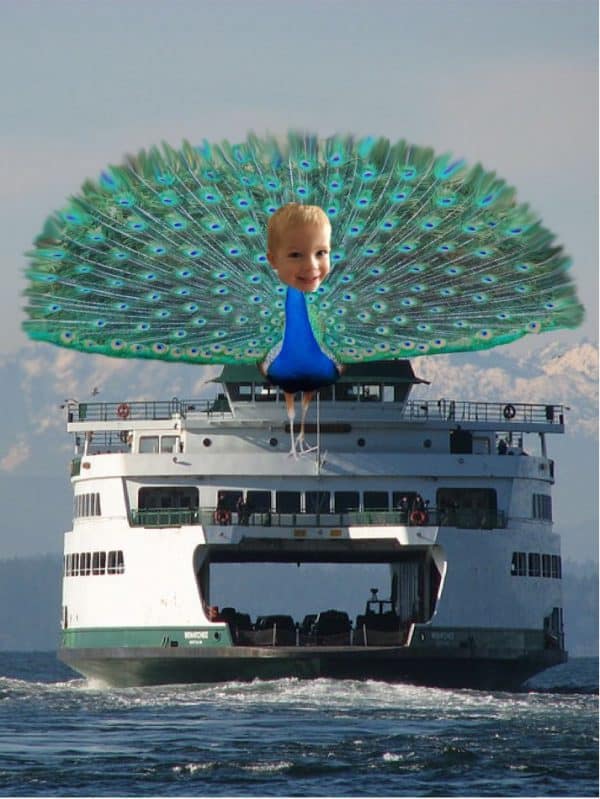 Monday:: The boys will walk down to the restaurant in our town. I’ll have leftovers or something. A friend from California is coming in for the memorial and I get to drive her (solo!!) back to the airport. Nothing like some quality friend time in the front seat of a Subaru.

Tuesday:: Paninis and veggie sticks. Jack has lacrosse and then soccer back to back.

Wednesday:: Chicken peanut satay, rice, and some sort of veggie. I have to go grocery shopping on Tuesday and I’ll see what looks good.

Thursday:: Browned butter and mizithra pasta and crispy broccoli that I am trying in the air fryer.

Saturday:: Chicken grain bowl recipe I’m working on. It didn’t happen last week because we had so many leftovers from family dinner. 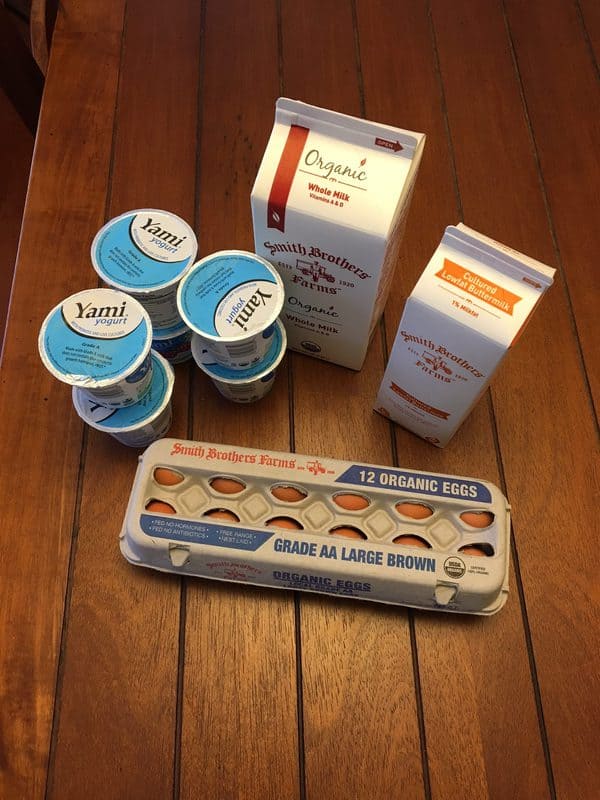 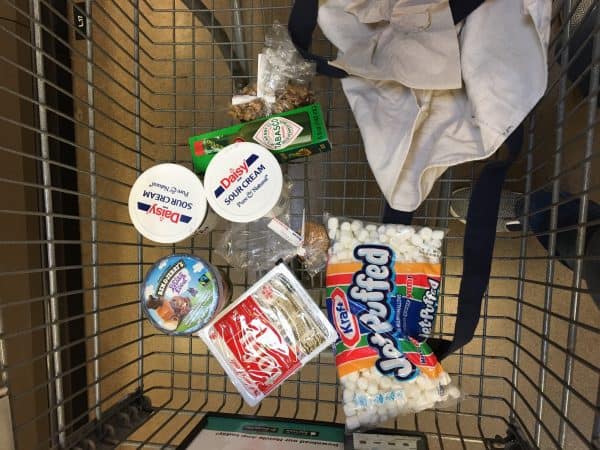 Costco –  I can’t find the receipt, but it was under $30. My favorite discovery of the summer – Nonna Pia’s was at Costco for a roadshow. I bought four bottles for the price of two in the grocery store. 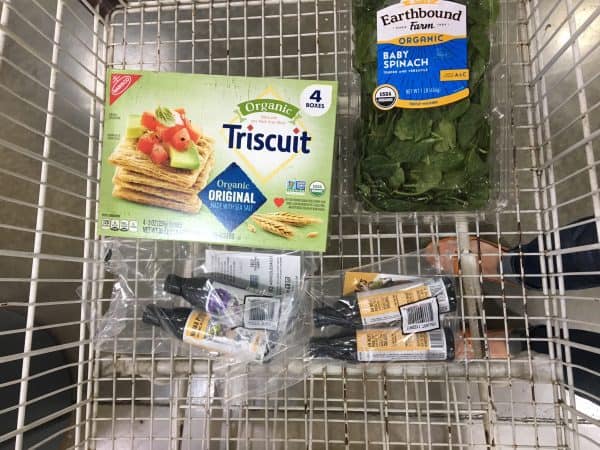