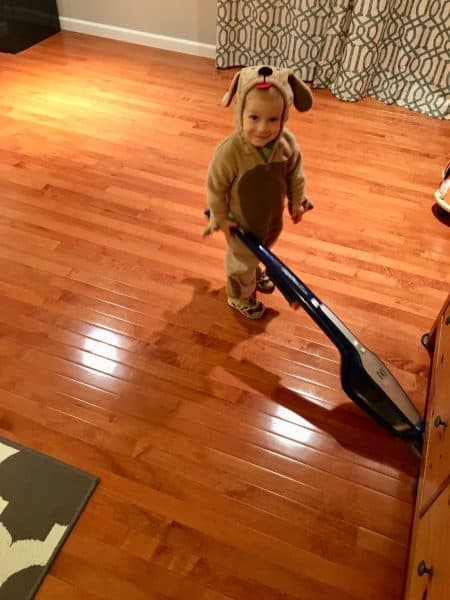 Once he realized what was going on, he was all in. ALLLLLL in. He hated being in the stroller and just wanted to be with Jack and my nephew. He would whisper “tip of teet” at the doorways and then would proclaim “honey” when he was given candy. With a shout of “happy ween”, he’d get ready to head to the next house. We didn’t hit up all that many houses, but all the kids cleaned up in the candy department. We let Bennett have a Kit Kat mini that night, and he liked it but didn’t ask for more “honey”.

The Candy Fairy came and blessed the older boys with Star Wars mugs, a Lego figurine, and $1. Bennett got none of that, and I sold his candy on Thursday to a dentist in town. Four dollars went into Bennett’s bank, and the dentist donates the candy to be sent to members of the military.

We live in a neighborhood with very steep hills. Growing up, we’d be part of a giant herd of kids climbing the hills in search of sugar. It would be like an ant colony of candy-crazed insects. Today, kids seem to be too lazy to trek these steep roads. We see the occasional car driving kids from house to house (that isn’t earning it. Slacker asses.) but spotting a rogue tricker or treater is like seeing a naturally tan person in the middle of London.

At the start of last week, I was at the post office in my wee little town. No one gets mail service at their house in my hood (see above re: steep hills), so the post office is kind of the heart of the community. I saw a poster advertising a small housing development about five minutes away. It was basically a plea from the homeowners saying they really wanted trick or treaters and loved Halloween. At first glance, you think “awww”. Then on second thought, you think “are these a bunch of creepers”?

The boys made the decision to make the trek, and I’m so glad we went. Not all of the houses were decorated or participating, but those who were went balls to the wall. I asked at one house if they knew who had put up the flyer at the post office. The woman beamed and said “I did. Thank you so much for coming”. It was a 10-minute walk uphill, but the smile on her face made it all worth it. They say Halloween is about the kids. I say it was about that woman. 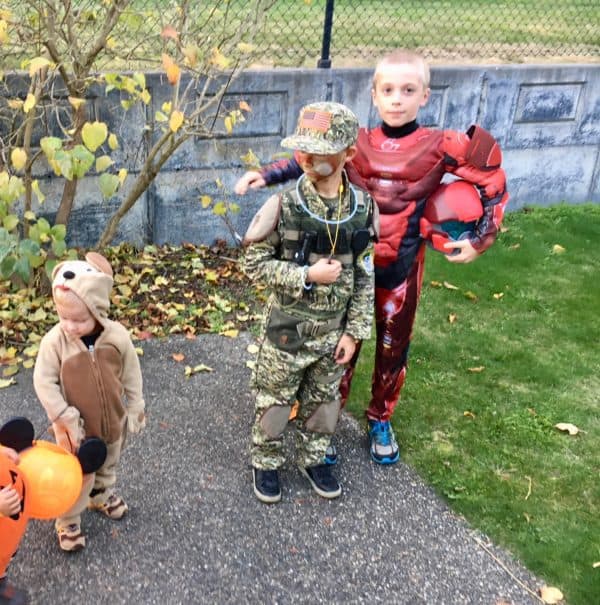 My sister and I spent much of our teens and twenties convincing my parents that their stuff was old and needed to be replaced. They had dishes they got for their wedding that were bordered by mini tulips. They were hideous and not microwave safe. Remember a world when you had to have special dishes to use in the microwave? We teased them about their old dishes, the old pots and pans that were flimsy and dented. We laughed at their threadbare sheets and shredded towels.

I got out of the shower the other day and dried off with a towel that I realized I have had longer than I have had Troy. The edges were shredded and the towel had the thickness of medium-grade toilet paper. I learned it by watching you ok, I LEARNED IT BY WATCHING YOU.

The next day I hit up Target and got four new soft and fluffy towels. They were on sale, but most importantly, they looked like they could absorb more than one teaspoon of water. I moved a few of the older towels down to our junky towel stash, and I broke the family cycle. I will not be a statistic. 🙂 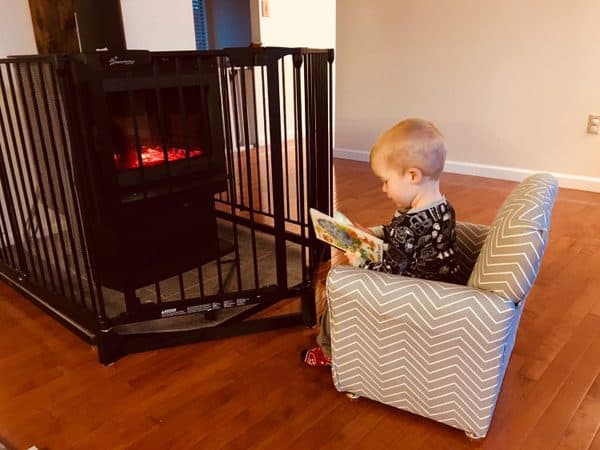 During my walk with Bennett in the afternoon on Halloween, I was sporting shorts and a t-shirt. It was chilly in the shade but felt just about right in the sun. That evening was super cold, and the rain started the next day. I woke up Friday morning to snow on a car parked on the street. That is definitely the earliest snow I can ever remember in the Seattle area. As unabashed lovers of snow, Jack and I were pretty excited by it. We hope it is a beacon of things to come this winter. With a new wood stove, an awesome snow car, a fully-stocked pantry, and steep sledding hills, the boy and I are ready. 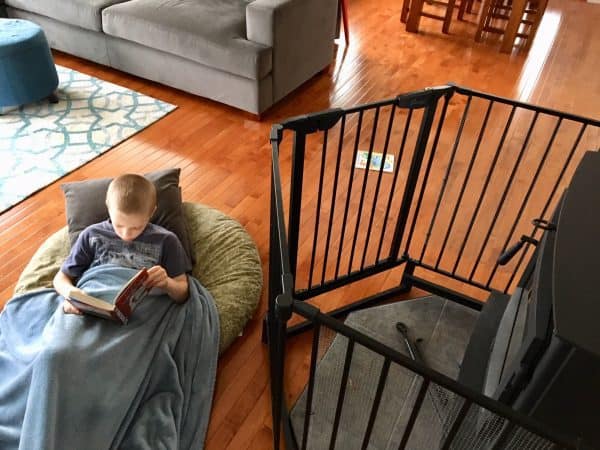 After the snow discovery, I decided to build a fire. And then I almost died.

Woke up at 4:30 to a dusting of snow. In November. In Seattle! Decided to build a fire before anyone else woke up. The fact that this ????started at all is amazing. I only had a few pieces of wood and kindling in my hands from our porch box, when an evil ???? dropped from the rafters and almost fell on my head. I am still amazed I didn’t scream and wake the neighborhood, but I hauled ass inside and started the little fire that could. A miracle of miracles. ????????????

Troy’s beloved 93-year-old grandmother has been placed on hospice and has been given a limited window. With a chronic infection that won’t go away and some dementia, her life is currently about maintaining. She has lived a full life and loved her family deeply. May we all be so lucky and blessed in our own lives. And amen. 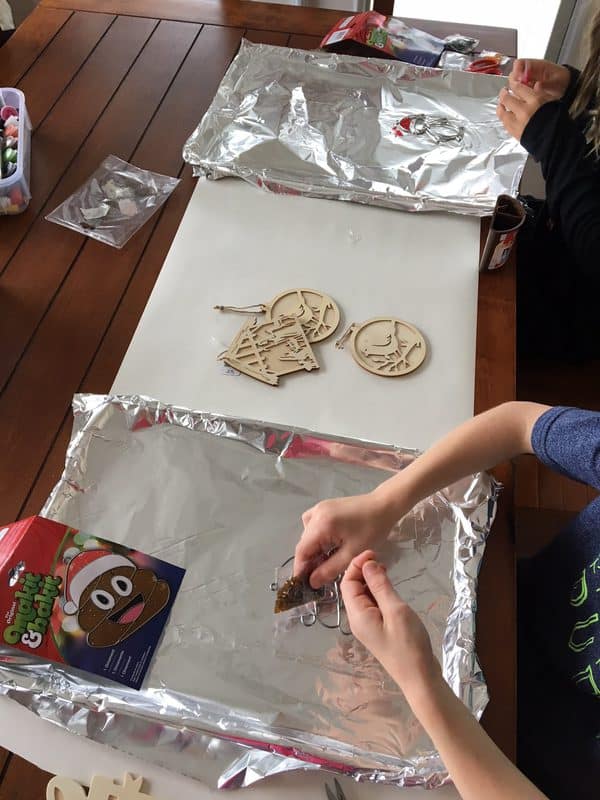 Between the weather and my desire to not spend the afternoons cooking, I have been trying more and more Instant Pot (<—- still on sale) recipes lately. Last Sunday during family dinner I served this Minestrone Soup with my homemade Cheesy Garlic Bread – AKA Crack Bread. It took forever to come up to pressure, probably because I stuffed that sucker so full of veg. At first, I thought the tomato taste was overwhelming, and I even used less than the recipe recommended. After more bites, the tomatoness of it all grew on me. The next day the flavors were still great, but it had thickened considerably (which was fine). I wish I had used more pesto.

The other recipe was Mac and Cheese in the Instant Pot. This was incredibly easy. Like stupidly easy. I ended up using 1/2 cup less water than it called for, but I almost had to double the cheese to get a solid cheese taste. I used a mix of medium and extra sharp cheddar. My sister tried the same recipe a few days later and didn’t have a lot of success with it. She used the same pasta I did but said hers fell apart. Have you tried any new recipes lately that I need in my life? 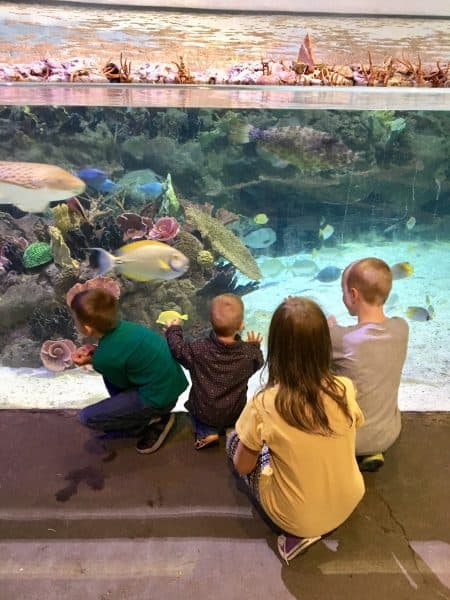 We had Jack’s fall conference this week. His teachers for the last two years were known entities to us. They did team teaching, so he had both of them for part of each day for two years. They were amazing and changed our lives for the better. Jack’s teacher this year has been great about communication and he says she is really nice, but we just hadn’t gotten a great feel for her yet. The conference went very well and she was lovely. She said Jack is well-behaved in class (he saves all his naughtiness for home?) and helpful to others. Things seem to be going really well and we’re thankful. It’s so funny to think we have a third grader. Even though this is year three of great reports in school, I still keep our kindergarten disasters in the back of my mind. I keep waiting for the other shoe to drop. That is an exhausting way to live and I need to do better about looking forward. 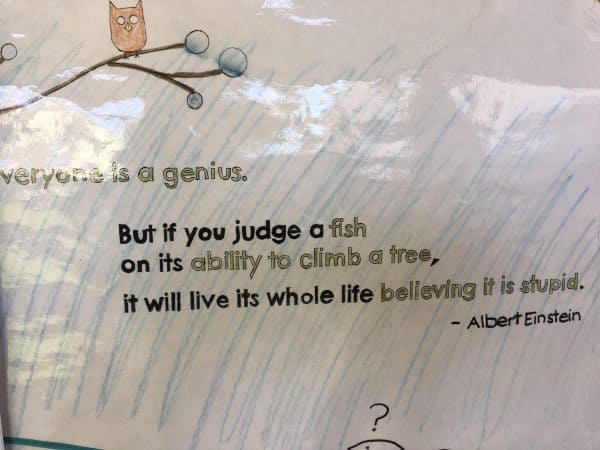 One thing that has never wavered since Jack started school is his love of learning. While behavior has been an issue in the past, academics are not something that we have to be stressed over. His teacher gave us a print out of the reading assessment they recently took. The star on the right is where they need to be by the end of the school year. The middle triangle is where he tested last week. I love my nerd. 🙂 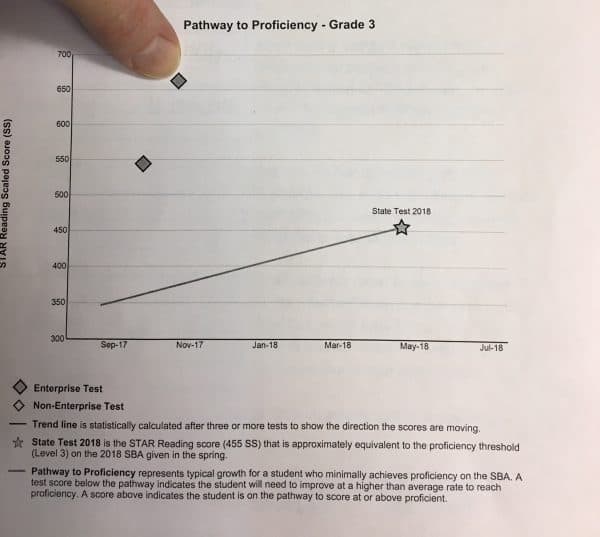 We made the decision last week to have Bennett start preschool in January or February. He’ll be two at the end of January and I’m not fooling myself into thinking that preschool at that age will teach him anything other than how to share germs and not hit when someone else takes his toy.

He’ll go two days a week for three hours each time. The price is insanely low because it is a co-op preschool. But I found there is an option to pay more to not volunteer. That is the route I am going because honestly, that would drive me to drink. We’re more in it for the socializing and immunity building. I’m more into it for the six hours a week I’ll be able to devote to blogging without distraction.

Did you miss any posts this week? Pity. But don’t you worry your sweet head cause I have you covered.

Homemade Teriyaki Sauce. Gah, this is so good! Adapted from the recipe of an aunt of a friend. 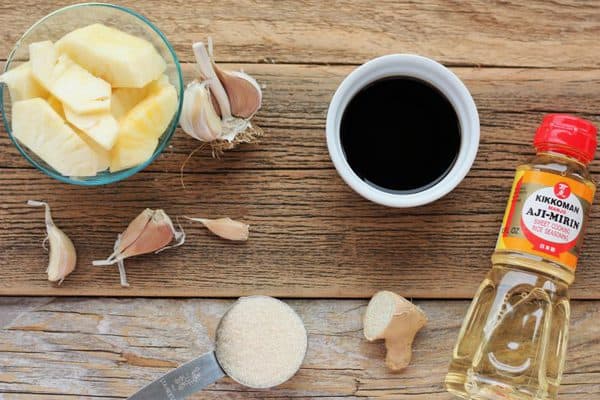 How to Plant Garlic. It isn’t too late in most zones to plant your garlic for next year! 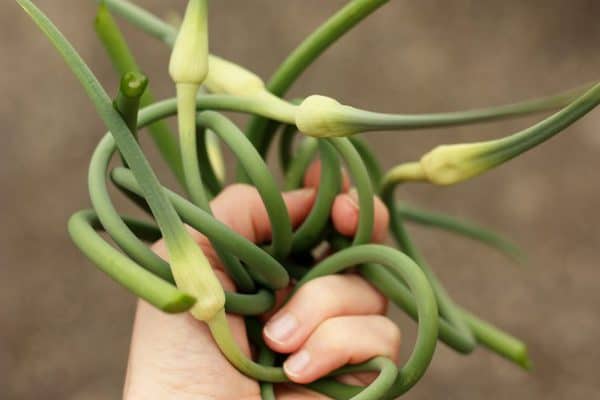 Natural Cold Remedies. Normal colds and man cold season are upon us. Be ready! 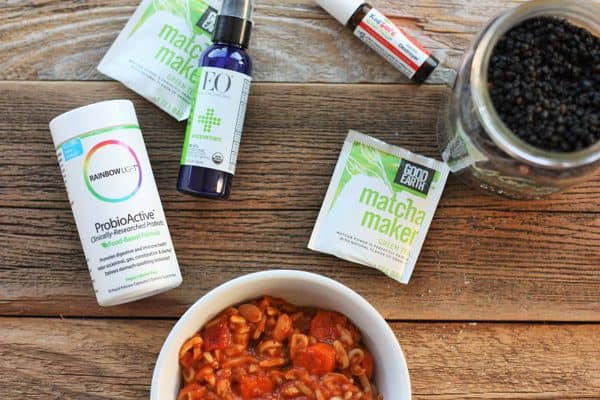 Candied Pecans. Two ingredients – one being pecans – can produce such tasty results. And this is a make-ahead gift and holiday dinner component of epic proportions. 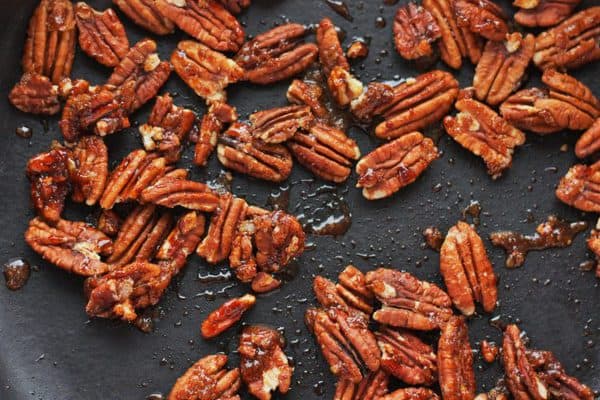 Monday:: Baked potato soup! I’m taking my base recipe and trying to adapt it to the Instant Pot (and take some better photos in the process). The soup will be paired with a salad.

Tuesday:: Jack has foolishly signed up for running club at school on Tuesdays and Thursday. It’s free (yay!), but it also means I want Tues/Thurs dinners to be super warm and comforting. So we’re going with Puffed Pastry Sandwich Bake and grilled veg in the toaster oven. Boom. Easy.

Thursday:: Working on another sheet pan dinner for ya’ll!

Smith Brothers Farms: $20 on the nose. The button? 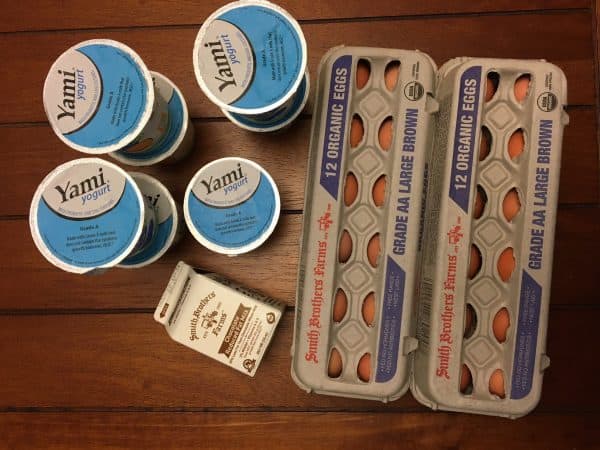 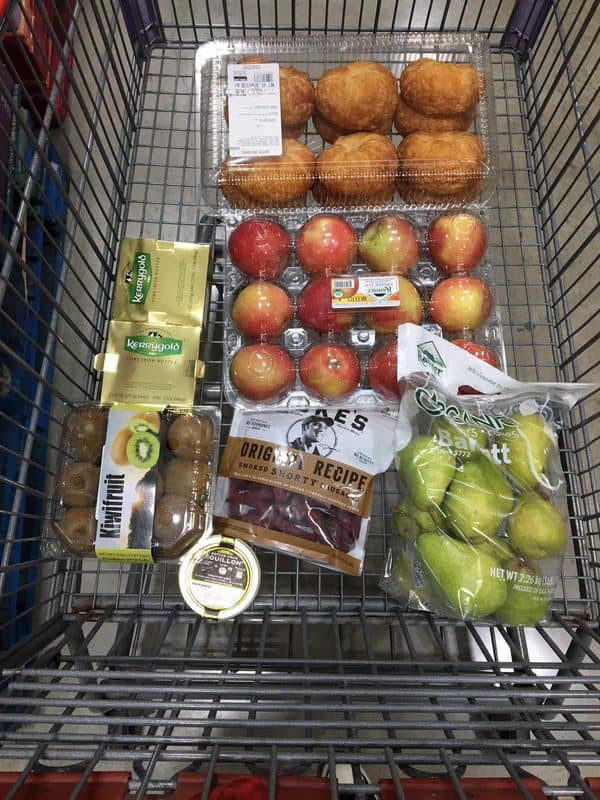