Do you know what the most terrifying part of my morning is? Of course, you do! It is right after I have put on mascara and I feel a sneeze coming on. It is like bargaining with the devil to not let that sneeze come to fruition.

This week marked a turning point for us to get into the holiday mindset. Troy put up lights on the house and in Jack’s room. Jack and Bennett got their Lego advent calendars from my friend Anne. I think she misinterpreted being their godmother with being their fairy godmother.

My mother-in-law also dropped off their homemade advent gifts. Each year, she fills a treasure chest with 24 little presents wrapped in paper bags. This is the first year (obviously) that Bennett gets to play along. It’s not the easiest thing to explain to a 22-month old that he can only open one of those presents a day. Thankfully at this age, things can be out of sight and out of mind. Unlike Jack who never shuts up about gifts.

We never bought Jack birthday or Christmas presents until he was about five. With the grandparents and aunties in his life, he never even noticed or understood which things came from us. We just realized that Jack will be on the lookout for Santa bringing gifts to Bennett as well. It is a good thing that Jack understands that Santa brings little boys practical gifts.

It is also the time of year for giving tree/angel tree gifts at church and Jack’s school. Second only to buying new school supplies for a charity my church supports, these gifts are my favorite shopping trip of the year. I save up my Ibotta and Swagbucks rewards all year and am cashing them in for our giving gifts. It is free money and I love spending it for kids more worthy than my spoiled ass kids (see previous two paragraphs). 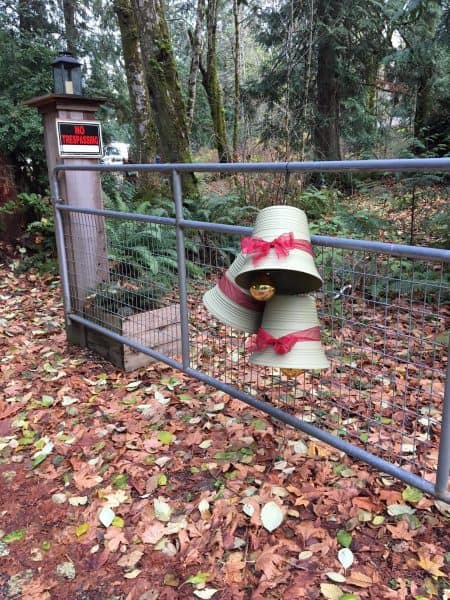 I read that sign as “please trespass and take a photo of my amazing large garden planters turned into Christmas bells”. And plus I was technically still on the public road. The stroller, however, was not. Bennett is the trespasser. I’m innocent in all of this.

Bennett’s best friend is our neighbor’s little boy who is six weeks younger than him. We met them when we were having a garage sale. It was over for the day and I was upstairs nursing Bennett. Troy comes bounding in and said “I saw a woman walking up the hill with a stroller so I opened the garage door and invited her in to look”. A bless her heart, she was lured into our garage by a strange man…and we’ve been friends ever since.

I am making her son a little quilt for Christmas. There is nothing like starting a big sewing project with less than four weeks to go. Right? Right? 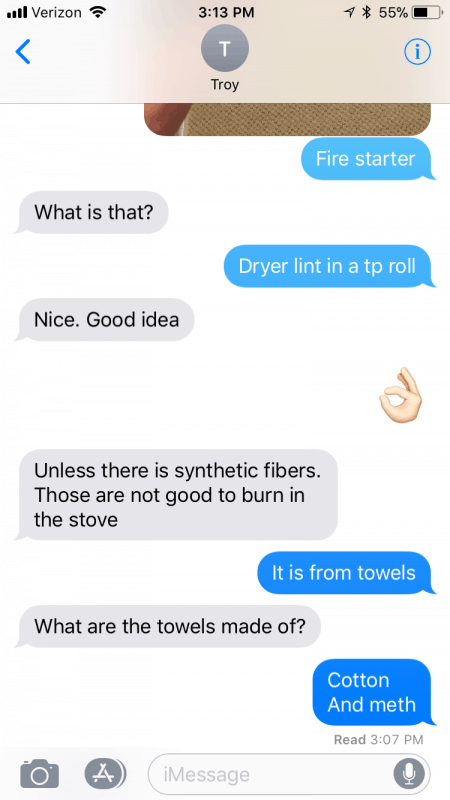 I get up between 4:30 and 5 am every morning. I hop in the shower and then park myself with my laptop to work until Bennett gets up. I often have Law and Order on in the background. It’s so funny to observe what the population is that watches cop procedurals at the butt crack of dawn. The ads are all about skim firming cremes, security systems (it’s 5 am and you’re alone in the house. Bad guys are trying to get you!), ambient noise-canceling earbuds that seem borderline crazy (I had never heard of this company before so it must be a new ad), and make up and skin care for women over 50. I get it ok? I have a mature taste in television. Thanks for driving that point home. 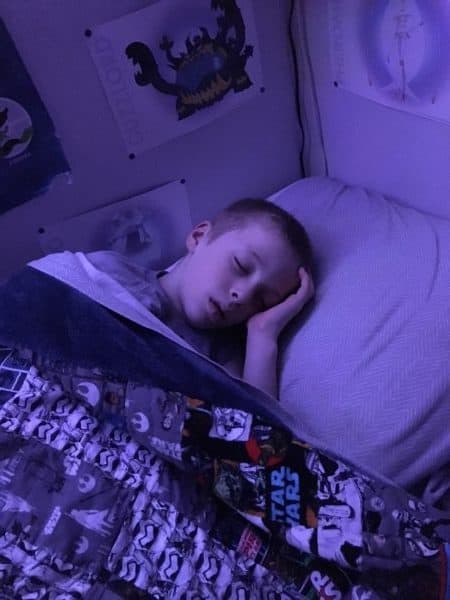 Neither of them has ever slept like this. And they both did it on the same night. 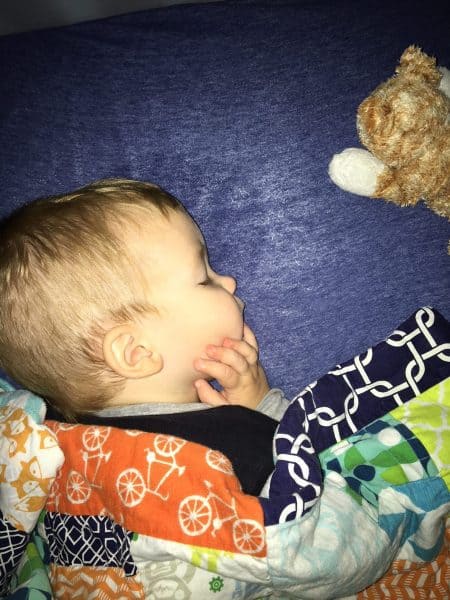 Yes, that is a puddle of sweat around his head.

Jack has been training for the last month to run a 5k with his running club at school. I started to panic at the start of the week when I realized that the teachers wouldn’t be responsible for the kids during the race. They recommended finding a pacing buddy to run with your kid. Usain Bolt wasn’t available at such short notice, so we had to get creative.

Bennett and I waited at a restaurant at the halfway point to cheer them on. They were there so fast and I couldn’t even understand how Jack got midway in just a matter of minutes. Troy said he could barely keep up with him on the bike, and Jack never once slowed down or dropped his pace. Apparently, at one point his shoe came untied, but he wouldn’t stop.

Troy took a video of Jack passing someone on roller blades and his stride is insane. The chipped/timed runners started out five minutes before the rest of the runners, and Jack passed about 75% of them. He did the whole 5k in 22 minutes! We need to look into cross country for this child. No idea where he gets it. I seem to remember our mailman in Los Angeles loved running… 🙂

Three years ago during the coldest week of the year, we replaced an old drafty slider in our dining room with a french door. During that process, some of the drywall around the doorframe got banged up. With the remodel, removing all the popcorn ceiling, new floors, and a new baby, that damaged drywall just sat there. And mocked us on a daily basis. Oh sure, eventually we just stopped noticing it. But we knew it was there.

Maybe two months ago, Troy made the decision that we should paint that wall. And by “we”, of course, he meant himself. Our living and dining rooms are two different colors of white, so matching the paint would be impossible and a waste of time. I spent three minutes at Lowes picking out two colors that I thought I liked. I brought home two little samples and one was a clear winner. What in the world did we do before those little $3 sample bottles? Goodness, those things are brilliant. 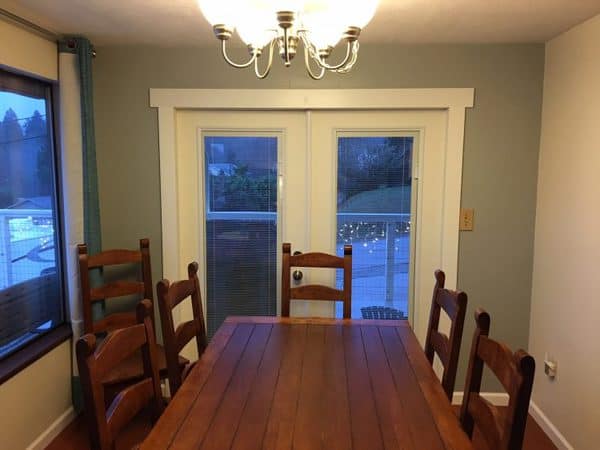 Like many of our projects, the sample swatches stayed on the wall for weeks (months?) and became part of our decor. Troy tackled it this week and the color is perfect. We both love it. It’s a nice perk that we no longer have to look at the busted drywall or paint samples. The color is hard to capture on a camera, but it’s a slate blue/grey and it’s stunning.

Leftover Turkey, Rice, and Black Bean Bake – this easy dinner is the perfect and versatile way to use up holiday leftovers. Someone on Instagram told me she used chicken and some chickpeas; so clever! 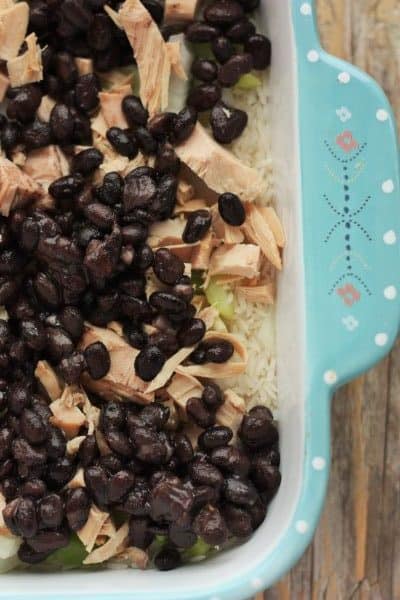 Peppermint Bark – having this in my house for the last week has been torture. TORTURE! I love peppermint bark with all of my heart. 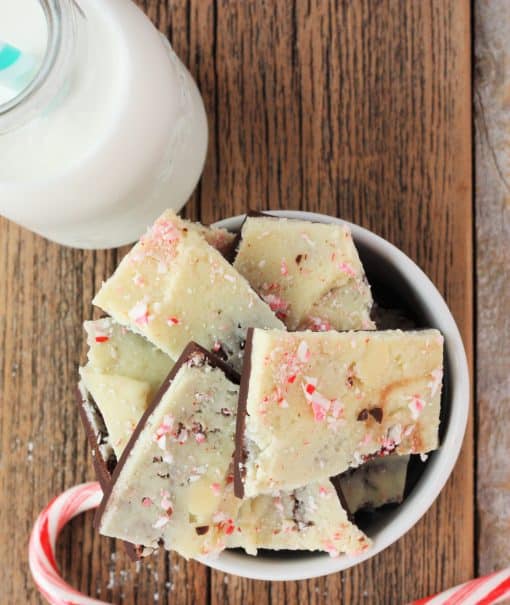 Gift Guide for Book Lovers – sharing some of the books that have impacted my life over the last few years. 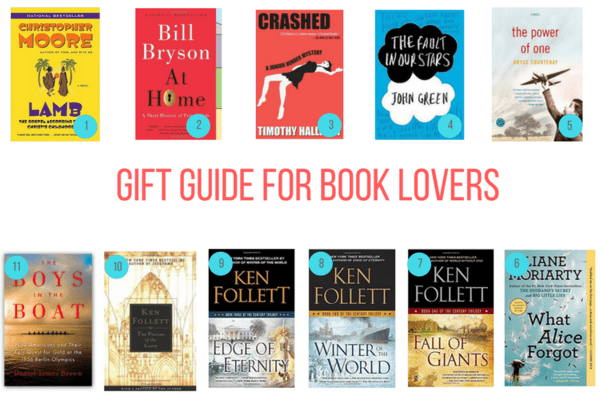 Orange and Chocolate Madeleines – these cookies are loved by everyone in our house. I left a few “un-dipped” for Bennett to enjoy over the week, and it’s such a blast to watch him savor his cookies. 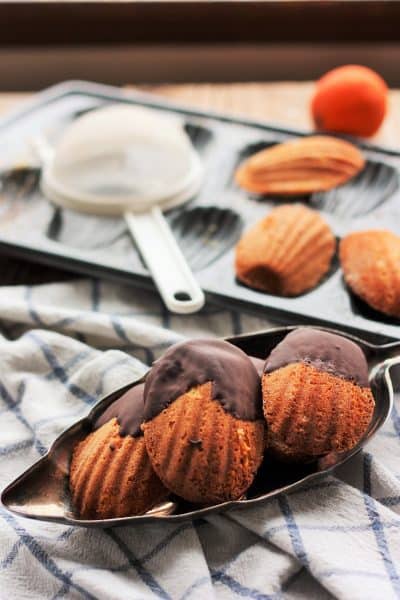 My favorite part of these cookies are the new photos. As you all know (because I never shut up about it), taking photographs of my recipes is something that takes me out of my comfort zone. It isn’t easy, and I am always uncomfortable to do things that don’t come naturally to me. 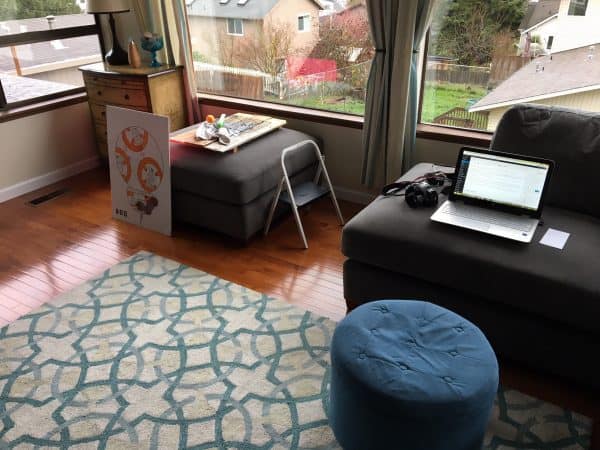 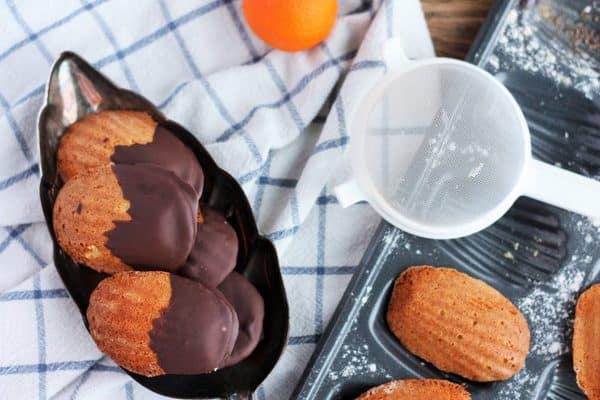 These cookies are an updated version of a post I published six years ago. At the time, the best photo I took of them was what my friend Angela now affectionally refers to as “the poop nugget”. 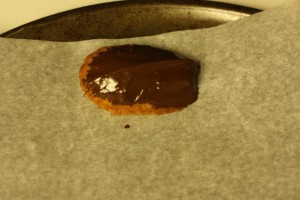 Best Gifts for 6 to 10-Year-Old Boys – if there is one thing I know in life, it is what boys this age want for Christmas. Why am I so well-versed in it? Because Jack never stops talking about this stuff. Ever. I’m not sure there is ever a time when this kid’s mouth isn’t moving. 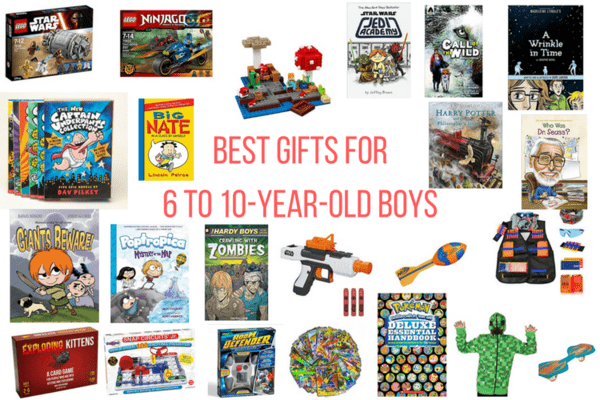 We are supposed to have nice weather this week – cold and sunny. I love when it is crisp and gorgeous out in Seattle. Perfect walking AND soup weather. Who am I kidding…any weather is soup weather!

Wednesday:: Chicken Gnocchi Soup and salad. Ack, this is one of my favorite meals.

Saturday:: I have no clue. I’m leaning towards leftovers or pasta if the fridge is empty. 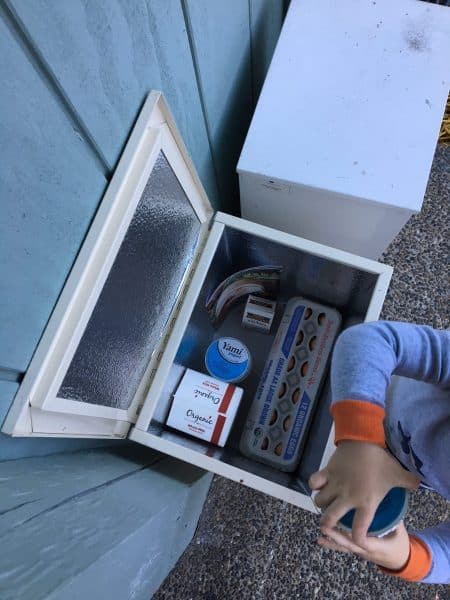 Costco::  So pissed about that broccoli! I cut it and prepped it on Thursday and then went to pick up Jack from running club. I came home and my entire house smelled like farts. It clearly was bad, so I looked at the bag and it was packed on November 1st! I bought it on November 26th! But it’s Costco, so you can bet your butt I’m returning it this afternoon. That stank ass broccoli has been on my front porch since Thursday night.

And I don’t know how much we spent on this grocery run. I know the cheese is $15.99 (5 lbs), the broccoli is about $5, and the croissants are under $6. We ended up randomly buying a tv on a post-Black Friday deal (whoops) and everything got lumped into one bill. I have to say how much I love my car. We got a flat screen tv, two kids, Troy, and myself in my car along with groceries, a diaper bag, and a swim bag. Best car ever. 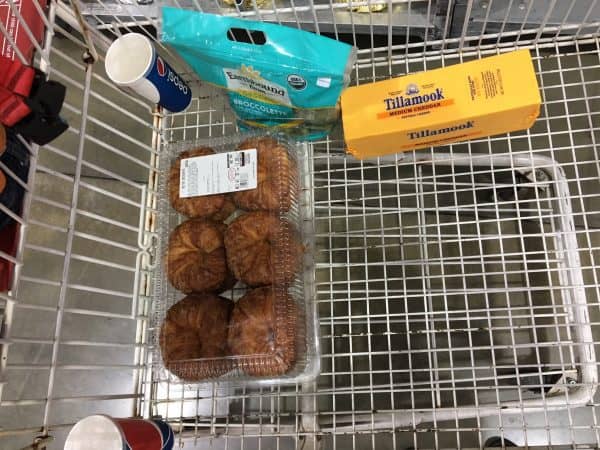 Fred Meyer: $22.18. That salad went bad four days before the pull date. It was not a good week for me and fresh veg. The yogurt was clearanced out though because it expired in less than eight days. I tell Bennett I only love him enough to buy him discounted yogurt. 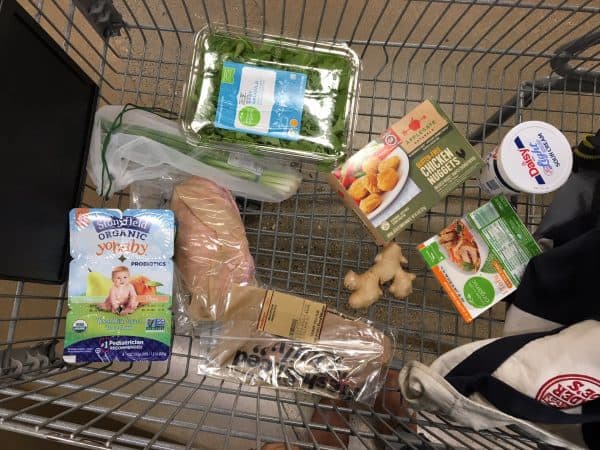 Local butcher: $17.14. I got sausage and grassfed burger.