The Instant Pot is getting a workout over here people. Did you get yours on Amazon Prime Day? I shared on Facebook that the 8 quart Instant Pot was only $89!

Rice has been an “instant” favorite, and the chicken stock I made this week was insanity. I made rice last Sunday for family dinner, and after my first bite, I told Troy we were getting rid of our rice cooker. The Instant Pot doesn’t make rice all that much faster than the rice cooker, but the texture was crazy pants. And getting rid of one more thing is always fun.

I used to make chicken stock in my crockpot for 8-10 hours, but I achieved even better results in the Instant Pot in only two hours (plus 30 minutes of time to pressurize, and 15 minutes to depressurize). I will say one thing I prefer about making stock in the crockpot is that I can make more. Since you’re not supposed to fill the Instant Pot too full, I ended up with almost a quart less of stock with this batch. I think going forward, I may make it in the Insant Pot, but on their crock pot setting so I can add more water. Who knows. I’m obviously a pretty wild person, so we’ll see. Rebel without a crock. 🙂

Next on the list will be had- boiled eggs and yogurt; recommended by you all. I’m also going to dive fairly deeply into Instant Pot desserts. I put in the research for you. I’m a giver like that. 🙂 If you’re on Pinterest, follow my Instant Pot board (and others) as I pin my favorites.

This week was a complete blur, as once again, Bennett was dealing with a fever. He seems to get one every other month for no freaking reason. It is like his fever period. My friend Angela put it best when she said: “Bennett is just going to be your fever kid”. It always seems to happen when Troy has a day off, so that is good from the perspective of not having to go it alone. But clearly, Troy’s work schedule is causing our kid to have fevers. I’m super behind this week on everything because of that damn fever. Every time I scheduled work time away from the house, I had to cancel it because he was so clingy and only wanted me. If you have emailed me in the last week, I promise I will respond soon! 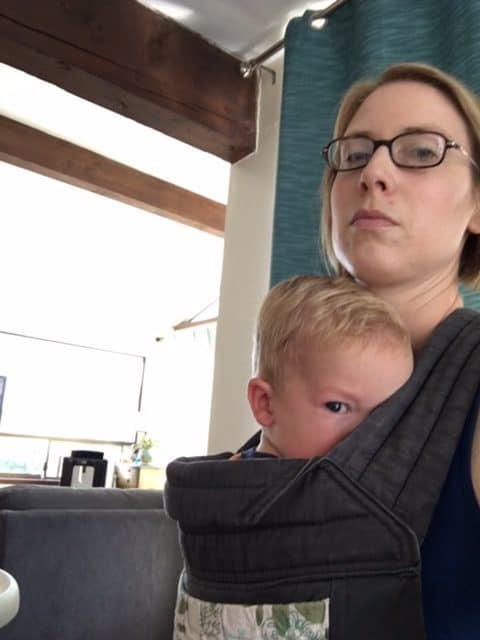 How many of our meals were eaten this week. I have a case of unrested bitch face. 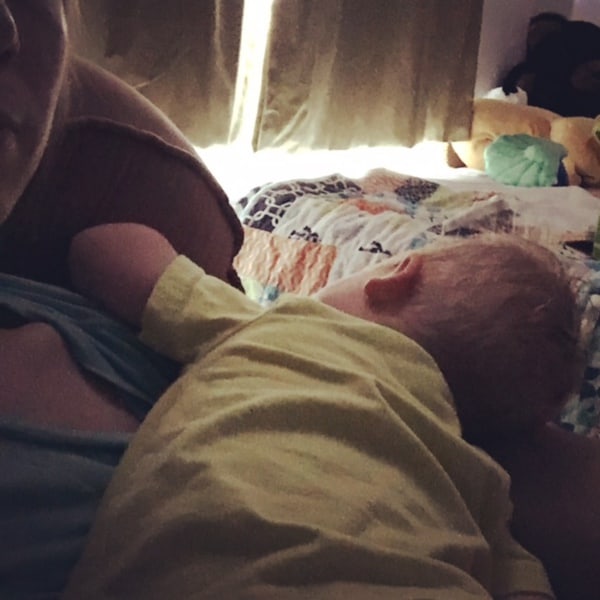 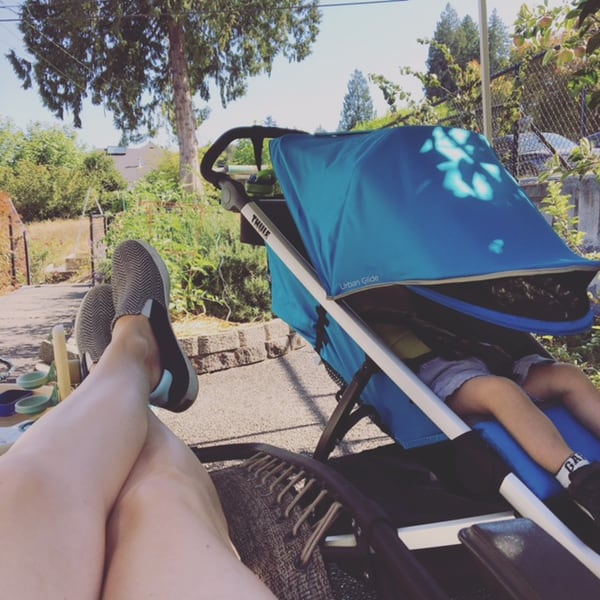 My most comfy and new favorite pair of shoes. Also, I am clearly angling to become a product rep for a company that sells tan accelerating lotion. Call me!

Jack had a great week at the library. He hit his 100-hour mark for the summer reading program, went to a Minecraft party (and is back to talking about Minecraft non-stop. Hold me), and had an afternoon chemistry club event. Jack looks forward to the summer schedule all year. This coming week he is doing a three-day workshop based on a book all the participants had to read ahead of time. I have no clue what it entails, but Jack is stoked. All events this summer are free and mostly happen due to the hard work of one part-time children’s librarian and volunteers. Public libraries are the freaking best! 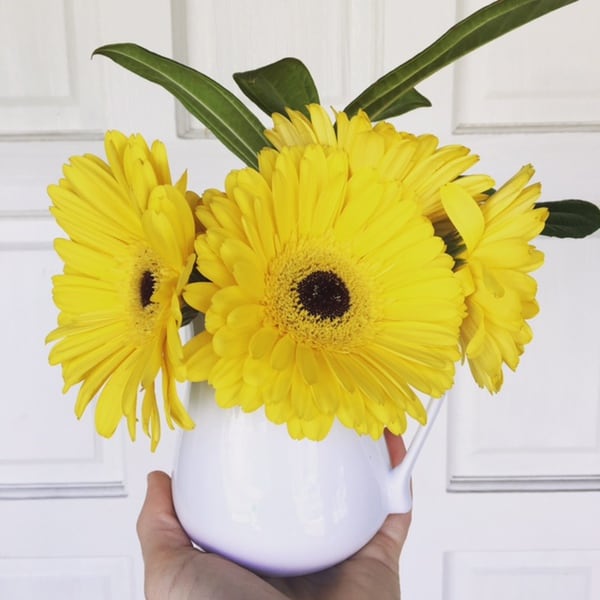 Troy and I had a date “afternoon” yesterday. We went to see Spiderman and have lunch. I was really batting a thousand because I got the time of the movie wrong. We showed up and found out it didn’t start for 40 minutes. So we decided to go to a local Italian sub place because their website said they opened at 10 am. We got there at 5 to 11, and Troy was informed (loudly and kind of aggressively)  that not only did they not open at 10, but they hadn’t for 30 years. A woman whom I assume was the manager yelled at someone back in the kitchen to check the website because “these people out here are saying the site says we open at 10 and I have no idea where the heck they’re seeing that”. She yelled it so loudly that everyone, including us, could hear it. Our waitress came over looking embarrassed and said “don’t mind her. She just has a big damn mouth”.I showed them on my phone where the misinformation was and didn’t even get a “thanks” or “sorry for implying that you’re a liar in front of everyone”.

Yeesh. So, we’re not going to be going back there for a bit.

We ended up seeing Spiderman, and it was fine. Ok. Meh. The movie I really want to see is Atomic Blonde, but that doesn’t come out for another two weeks. And it will easily be six months before we’re able to see another movie, so it will be a Red Box kind of night this fall. I always love summer movies, especially for the air conditioning. The day after we got married, we had 11 hours to kill between when we had to be out of our hotel, and when our red eye left for our honeymoon. We went and saw the original Spiderman, then had lunch, and watched one of my favorite movies of all time, the Bourne Identity. When I think about our wedding, I always think about the day after, because it was so relaxing. And the heat. It was 104 degrees on the day we got married. Grossssss.

Guess what? We’re getting air conditioning this week! I fought against it because while it will be amazing, it isn’t 100% necessary. But it’s happening, so that’s that. In order for them to install it, we have to take all the storage off of our two huge shelves in the garage, and everything out of my Harry Potter sewing room. I guess they’re laying pipe through those areas. Hee hee, laying pipe.

While it will be a bit of a pain in the butt to move all that stuff, I had been thinking the garage needed some reorganizing anyway. You thinking what I’m thinking? Label maker! 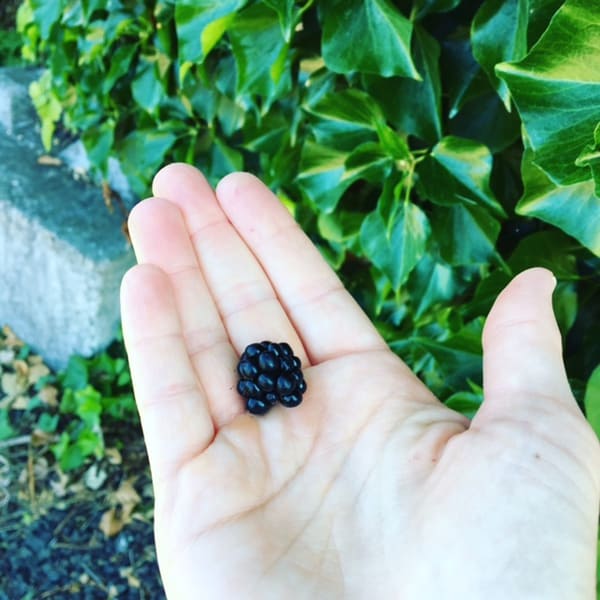 This week we have been harvesting a decent haul of raspberries and blueberries from our micro farm. I took the peas down off of the trellises Troy made from cattle panel last year and planted the beans and cucumbers. Cukes seems to be a colossal failure thus far, but the summer is still young. Garlic is up next for harvesting, and I should be pulling it within three to four weeks. Tomatoes are coming along nicely, and I am looking forward to eating punchbowls of tomatoes and mozzarella for lunch soon(ish). Jack and I picked the first wild blackberry of the season, which is always a pretty big freaking deal in our household. I still have two one-gallon bags of frozen blackberries from last year. I opened one the other day to grab a handful for a smoothie, and it smelled like August. I love free wild fruit.

Monday:: Homemade frozen pizza, grilled zucchini, and fresh corn on the cob from the farmer’s market.

Tuesday:: Chicken tacos (were supposed to be pork. See below. Whaaaaaa), rice (Instant Pot), corn, and black beans (previously made in Instant Pot and frozen).

Saturday:: Probably a slice of Costco pizza on our way home. Jack has a birthday party at a pool an hour away from us that lasts for three freaking hours. 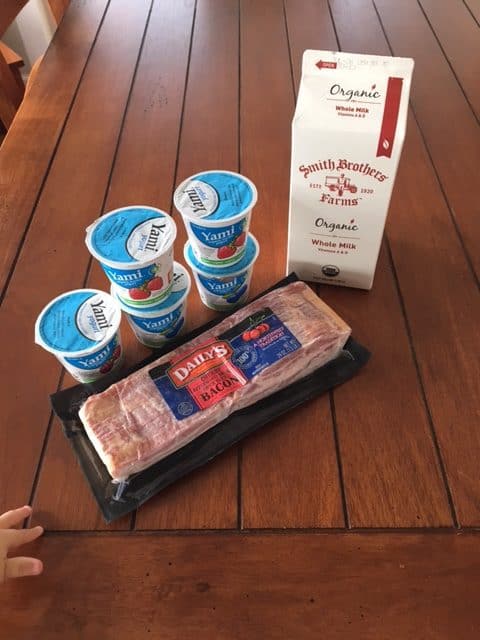 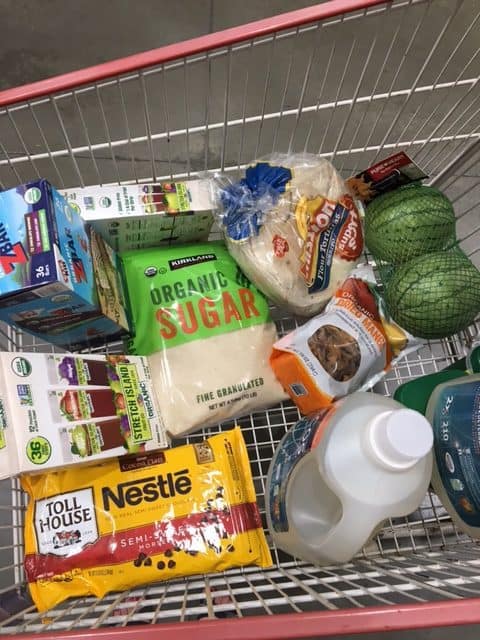 Farmer’s Market: $27.80 (not pictured were a big bag of tomatillos and cilantro that I picked up for our neighbor). We have two bags of apples, because Jack dropped the first bag he was carrying. The vendor was so nice and knows us as loyal shoppers, and gave Jack a whole other bag of apples for free. Someone has earned himself some chocolate chip cookies for next week. 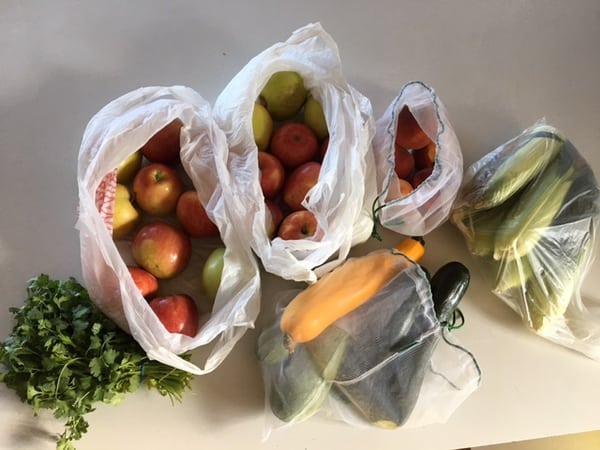 Someone emailed me about my reusable produce bags. They’re these ones. 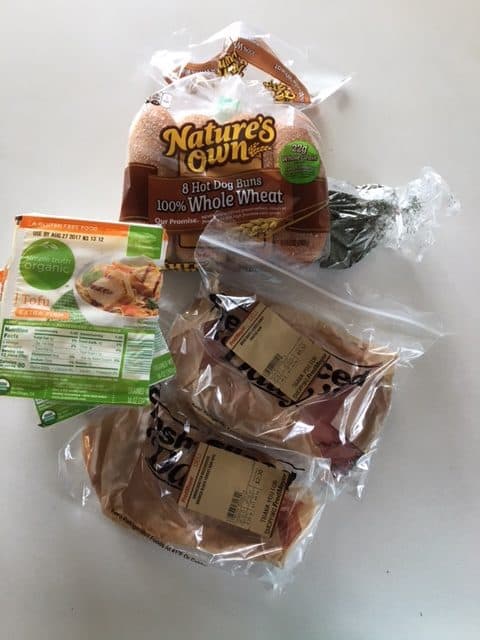 Local butcher: $23.48. It was a giant pork butt that I was going to make into carnitas in the Instant Pot. And wouldn’t you know it, I got home from the butcher, put it on the counter, and in the scramble to get out the door in time for our movie, I FREAKING LEFT IT SITTING ON THE COUNTER FOR THREE HOURS. I could have cried when I realized it.