Ya’ll. Y’all. All ya alls. Everyone. People. Listen up. I have finally found an under-eye concealer that works, stays all day and is light enough for my translucent skin. It’s called Bye Bye Under Eye and I bought it at Ulta (<—not an affiliate link and not sponsored in anyway). It may be the best $24 I have ever spent. I have found good concealers before, but they were all too dark (i.e., they contained actual pigment) and orange on me. This stuff freaking works and it really does last all day.

Now I only feel tired, but I don’t look it.

Oh crap. I just looked at the link online and it says it is anti-aging. Well, I guess I am 36 and officially headed down that road. 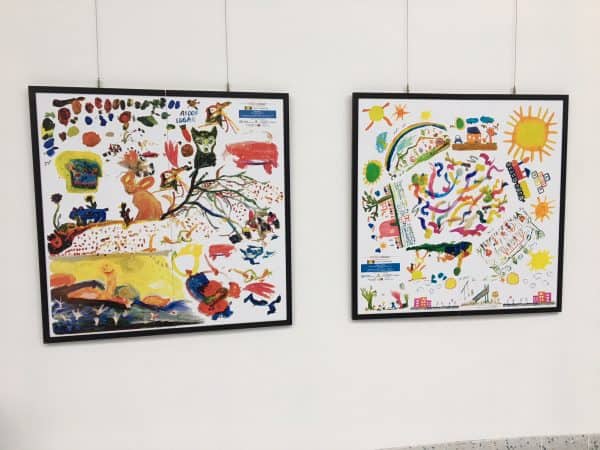 How was your Christmas? Our church hosts a Blue Christmas service every year for people who don’t necessarily find this time of year happy and joyful. Let’s check in. Everyone doing ok? Good day? Rough day? Meh day? It was bittersweet for us with my mom’s absence. It’s hard to describe but anyone who has experienced such things will know what I mean. I had a challenging day a few days before Christmas when everywhere I turned I was reminded of her and my friend who passed away in October from a brain tumor. In those moments I take a pause and a deep breath and remember how lucky I was to have people in my life that I miss so much. The sadness is a reminder that those people were a gift. 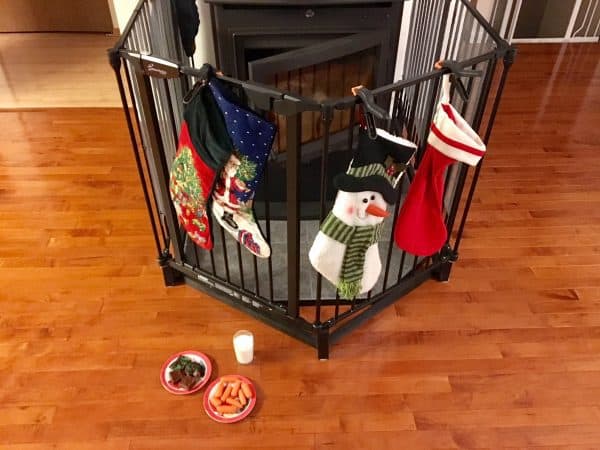 As I mentioned last week, our normal Christmas didn’t happen because Troy’s poor aunt caught a horrible case of the flu. His sister, her husband, and her mother-in-law came over and we had appetizers, popcorn, and watched movies. It was relaxing and I think exactly what I needed this year. Thank you all so much for the movie ideas and selections! Elf was our first and was a given. Jack chose A Christmas Story for the second one, and randomly Strange Brew was the third film watched. Jack had never seen it before and laughed so hard, even if there were parts he didn’t really get. In-between the first and second film, I suggested that we all go take a 20-30 minute walk around the neighborhood for some fresh air and movement. Every single person either yelled “shut up” or threw something at me, so that was a firm “no”. 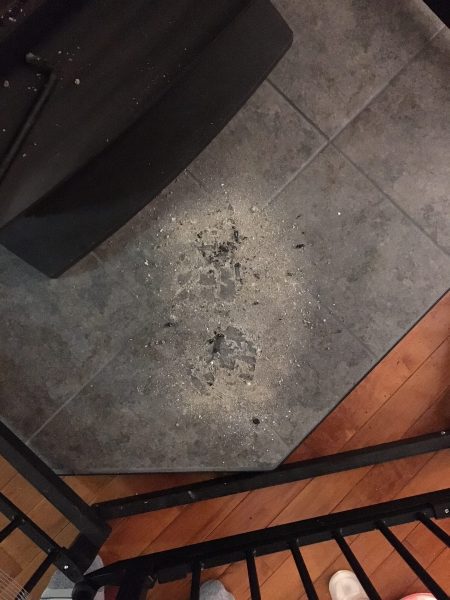 Santa was messy this year and knocked some ash out of our wood stove. He left a boot print as proof.

The day after Christmas we went to my sister’s for my side of the family’s holiday. She made her delicious stuffing/dressing, and we had turkey, some sides, and a butt-ton of Christmas cookies and fudge. The boys got some new books, a few toys, and a membership to the Pacific Science Center. I’m so all about experiences as opposed to more shit I have to organize, put away, and then haul to Goodwill in a year or two. No thanks. 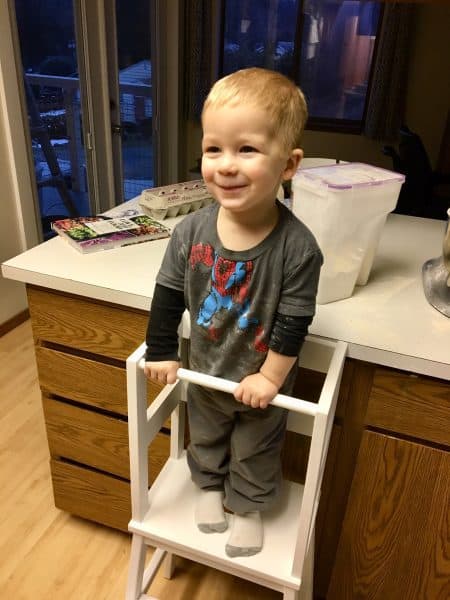 So pleased with the learning tower Troy made.

Just like last year, Jack gave me the best gift of all. He let me declutter his room and get rid of crap. I took three bags to Goodwill, gave a bag of clothes to my nephew, and tossed one bag of garbage. And that was just surface cleaning and I didn’t even really dig down into his toys. It was great. That kid gets me.

But the best thing I got this year?

Of all the gifts this year, a white Christmas with these two was the most special. Merry Christmas everyone. ??❄️?

Snow on Christmas is unheard of in Seattle. I can remember two, maybe three snowy Christmases in all my years here. It’s so special and was a memory that Jack at least will have for years. There is a house under construction at the top of our hill and their newly poured driveway is crazy steep. Jack and I, of course, used that as our starting point for sledding. Sledding is one of my favorite things and I’m a giant child while flying down a hill on a toboggan. 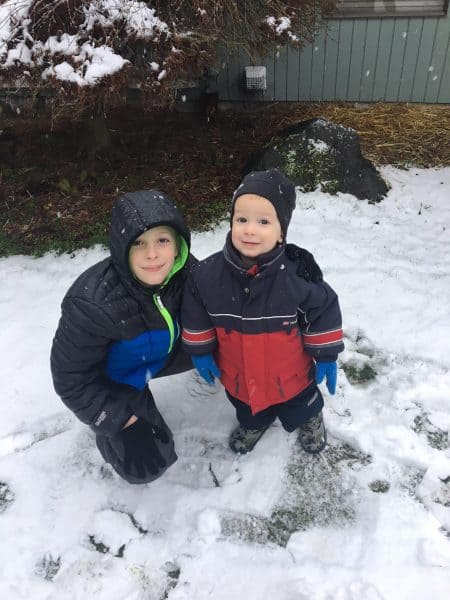 On Christmas Eve I rushed to Trader Joes to get a bunch of appetizers for our apps/popcorn dinner. Major props to our branch of TJ’s because they had a ton of people working and it was seamless. I zoomed in and out very quickly. But holy snikeys, premade food is EXPENSIVE. The amount I spent on hummus, appetizers, chips, etc., was what I would have spent on making a full Christmas dinner. I couldn’t believe it! My homemade hummus costs like $3 for 1.5 quarts. I paid $3 for 12 oz.

Back when we were incredibly broke, I didn’t have the time to make homemade stuff – I had to find the time because it was our only option. I am thankful that I still prefer to cook from scratch for most meals because there is no way we could eat the way we eat on our budget if it included more premade food. If only so many dishes weren’t involved! 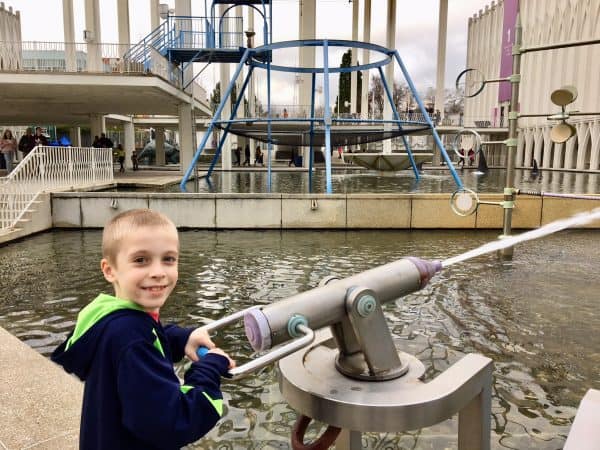 We went into Seattle yesterday to use our science center pass. Great weather, awesome sciencey stuff, and the boys were both great. Bennett was a dream even though he was two hours past nap. And Jack had a blast even though everything these days is just a constant running commentary. I challenged him to go five minutes without asking any questions. He made in 30 seconds and then said “I don’t really ask that many questions do I, and oh look is that a real owl” while pointing at a ceramic owl on a rooftop. 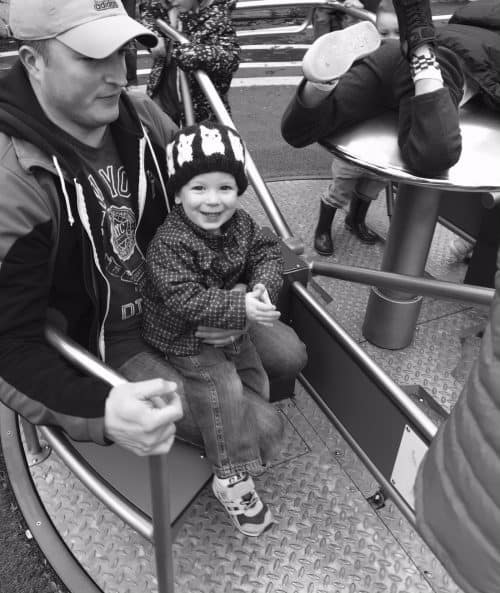 My ears are exhausted by the end of each day.

Monday:: Lentil soup, garlic bread, and salad. Haha, yes this WAS on our list for last week, but it didn’t happen. Our friends invited us to dinner for our annual “let’s not do presents but have dinner somewhere and no one does dishes” get together. And that pushed popcorn dinner back a night. 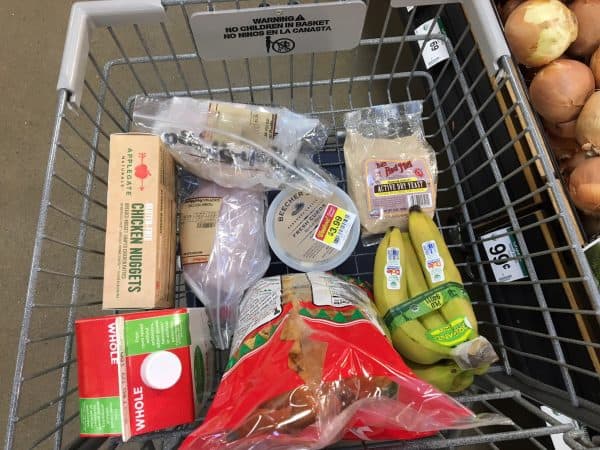 Trader Joes: $96. Holy crap packaged food is expensive! I don’t have a photo of it because it was Christmas Eve and I was rushing around like a crazy person.

Costco:: $63.22 That giant 4 lb block of butter was for church. Our church is part of a network that provides a warm dinner to any member of the community who needs it a few times a month. Butter was on their needs list for dinner last week. 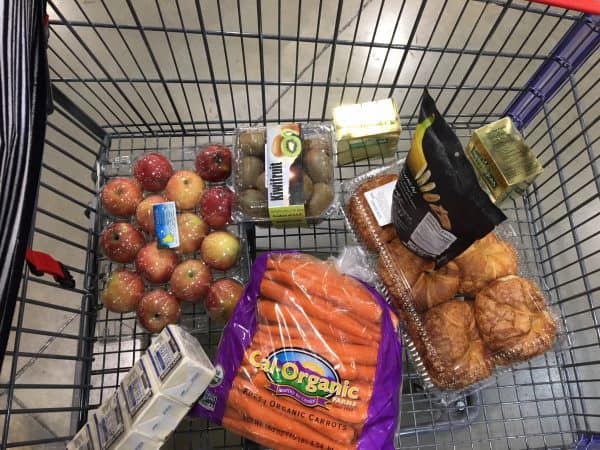