Nothing in the news this week. Super tranquil and calm last seven days, right? 🙁

Good freaking gosh, I wish I could explain what has happened in the last week. Never did I think I’d have to explain to my eight-year old that “yes, Nazis ARE bad. Always. No exceptions. Nazis = bad. End scene”. I’m tempted to create a video game for today’s youth called “Hey Kids, Remember the 1940’s, Cause We’re FREAKING LIVING THEM”. It will be just like Minecraft, but instead of diamond swords and hunting sheep, kids will learn about peaceful resistance and the importance of a fully-staffed State Department. Look for it Christmas of 2017. It’s going to be huge. I feel like I am screaming into a jar people. A freaking jar.

My neck hurt so badly this week that I went to see our chiropractor. Troy and I both also get sports massages from this amazing massage therapist who does killer work and a combo of sports and Thai massage. Yes, please climb on my butt and stretch my arms back in a way that makes me feel like Bob from What About Bob. I’m sailing! I’m a sailor!

Anyhoo, as the chiropractor was attempting to crack-a-lack (industry term I’m sure) me back in to place, he said “you get massages, right”? I told him I did. He then asked “why are you so tight then”? Well, I said “it’s been a tough few weeks. CRACK. “I’m stressed out about the news”. CRACK. “You know, Nazis and white supremacists are taking over towns with hate”. CRACK. “Oh, and my Mom passed away last week”. CRRRRRAAAAAACCCCCCCCK.

You probably heard that last crack reaching you wherever you live. I thought my head popped off for a second. I’m a tidy person and I did not want to have to clean that mess up. Thankfully it was still was where it should be.

Just when I think I can’t make sense of what the fuck is going on anymore, I read this article. And while the world still did not make sense to me, the feeling of “there is nothing I can do” ebbed a bit. Seriously, read the article. I would Kickstarter the shit out of that idea to use here in the US. 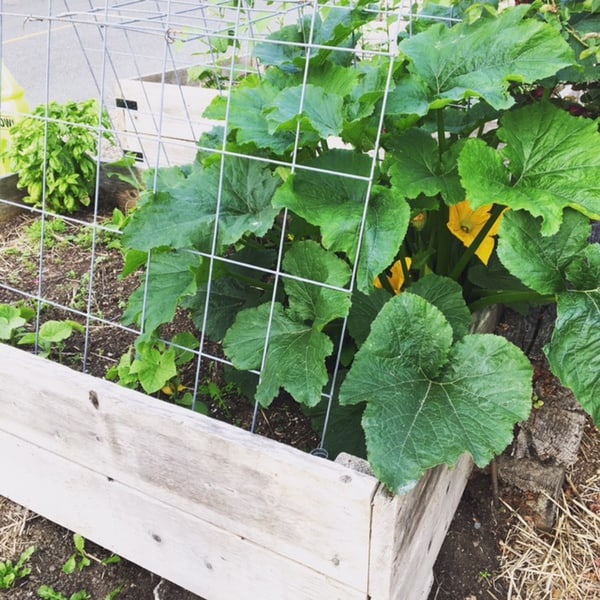 Remember how people warn you as a new parent about the “terrible twos”? That is bullshit. Three-year olds are actually the devil. The twos are a cake walk compared with the demon exorcism that is the threes. But no one bothers to tell you about the fact that eight-year-olds randomly become little assholes all of the sudden. What is up with this freaking attitude that is coming from my little snaggle-toothed (initial orthodontist appointment next week!) punk? It would be easy to explain it away as the tough time our family has experienced lately. Or the fact that he is out of school and thus his routine is off. But this has been going on a lot longer than either of those events.

We would hear amazing praise from his teacher, and he even won Primary Student of the Year for his whole freaking school. But at home? Total a-hole. I guess I should be thankful he isn’t a punk out in public, but I want the student of the year kid in my house too. Back when he was having so many problems in kindergarten, I read all the books and looked at all the articles. Please note, I have thought of everything you are about to suggest. 🙂 I think I just need to adjust my patience level a bit. Or potentially throw all of his toys in a bin and light them on fire in front of him while I roast marshmallows. We’ll see how it plays out. Could go either way.

I really think I need to start drinking. I feel like it would make me a calmer parent. But booze makes me feel like I’m instantly about to pee my pants, it tastes like crap, and it’s expensive. Just doesn’t seem super worth it to me, ya know.

Jack had basketball camp this week. Five hours a day of basketball drills, games, and new skills. This week was also the start of soccer practice for us. On Tuesday and Thursday, he had both five hours of basketball followed by 1.5-2 hours of soccer. On Tuesday, I finished putting Bennett to bed and came out to this scene on the couch. 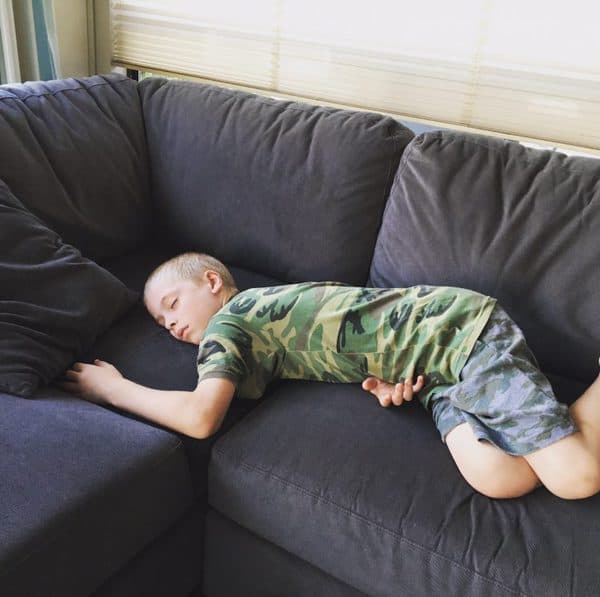 Yep, same camo on camo outfit as last week. That thing needs to get shredded.

Straight up fell asleep during Jeopardy. You know that kid was tired when he misses a chance to remark about Alex Trebek being a passive aggressive jerk.

While Jack was at basketball camp one day, I took Bennett to a free puppet show. Bennett is a complicated kid at times. He comes across as so brave most of the time but spent most of last year terrified of bubbles. He loves animals, but the zoo was really scary for awhile. I thus assumed that a puppet show would be a two-minute terror fest before I took him out of there and walked home.

Turns out the kid loves puppets. These puppets were interactive, so they hugged kids in the audience, the animal puppets nibbled on the kid’s toes and he was practically pushing five-year-old kids aside to get more puppet interaction.

I worked hard this week at getting my eating back on track, and I think it went really well. Earlier this week I shared meals and snacks that I had eaten over the course of 48 hours. Seeing things in photos and written in black and white kept me accountable to my goal of more veggies, more clean eating, and fewer sweets. I even made it out for a walk this past week and crushed that day’s step counts at 21.5k on my Fitbit. It felt great to get my sweat on.

Ohhhh, before I share our meal plan, I have to report back about this dish I made last week. It was ammmmmmazeballs. So good. We had our neighbor over for dinner, and she loved it so much that I gave her some to take home. I’m totally doubling the recipe and making it weekly until tomatoes go out of season. The chickpeas barely stayed crispy, so I’m not sure if it is worth it to cook them for 30 minutes. I didn’t have coriander, so I used smoked paprika, garlic powder, and a pinch of sumac. For the chickpeas, I added chopped garlic to the pan about five minutes before I took it off the heat. They were little crunchy flavor bombs in my mouth. I also doubled the lemon it recommended.

Dibs on Crunchy Little Flavor Bombs in My Mouth as a band name.

Tuesday:: This quinoa and chicken dish that was supposed to be served last week. It wasn’t. I slacked. Garlic bread and fruit on the side.

Saturday:: Dinner with our neighbors

I didn’t track our grocery spending this week. I suck. I know I spent $35 at the farmer’s market and got three huge canvas bags worth of watermelons (3), ears of corn (10), peaches, pluots, cherries, nectarines, apples, and a green pepper. 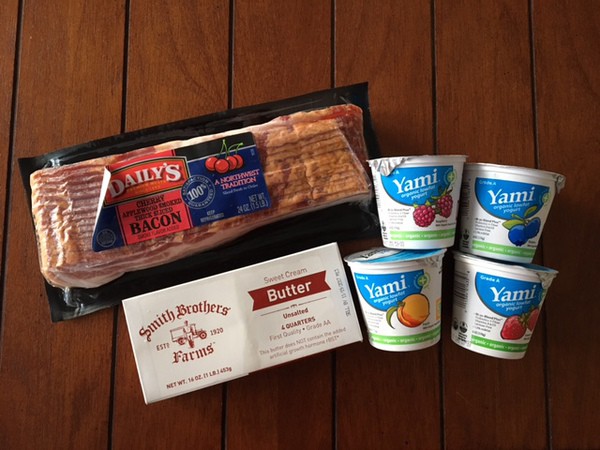