My dad bought a used motorhome! If you follow me on Facebook or Instagram you’ll already know that Jack and Bennett are obsessed with it. We spend hours in it every day, and B’s new favorite word is “RV”. In fact, I accidentally left the gate to the stairs open the other day, and as B made it halfway down the stairs, he kept saying “RV, RV” and was headed down to spend some solo time in there. 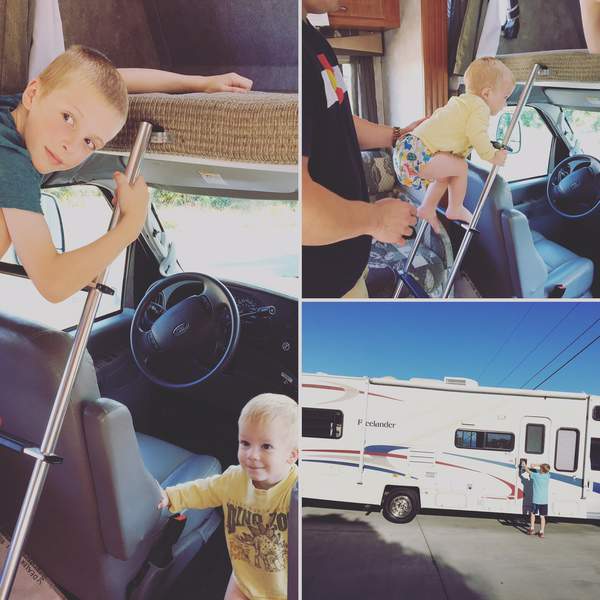 Jack keeps referring to it as “mine and Grandpa’s motorhome”, and he has big plans on where “they” are going to take that thing. 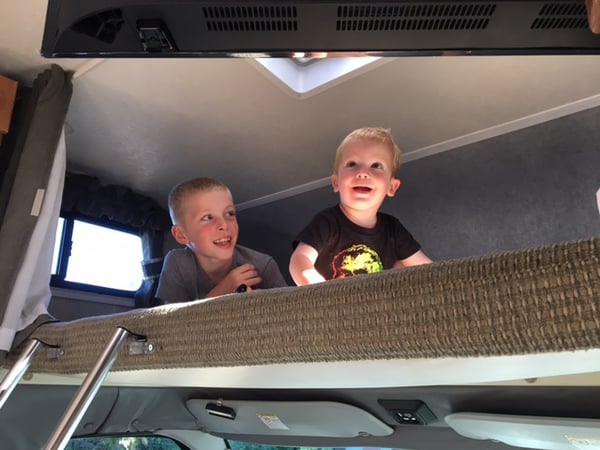 Watching pre-season football in the RV…parked in our driveway

My sis and I couldn’t be happier for Dad. He loves to wander, camp, and fish. For the last 20+ years, he has stayed close to home (except for two weekends of fishing each year) since Mom couldn’t participate. He has more than earned some vagabond time.

The motorhome came with a very special gift for me. My dad is letting me put in shelf liner and get things organized!!! I’m nice and am letting my sister help a bit too. Seriously, it is my early birthday present. I loooooove organizing new spaces and would open a business called Sarah Puts Away (Your) Shit (or SPAS) if I thought there was a market for it. A blank space AND shelf liner? I may have squealed a bit. I’ve been checking out a few RV organization hacks on Pinterest, but so far nothing has really stuck out to me. Do you have any tips you can share?

I made quinoa in one minute in the Instant Pot this week! I used this recipe from Pinterest. I rinsed and then toasted the quinoa with a tsp of olive oil on the saute setting. Instead of water, I used chicken stock because it gives more flavor. The cooking (pressurizing) time was only one minute, but it took a few minutes to get up to pressure, and then 10-15 minutes to depressurize. I wouldn’t say all in all it was that much quicker than doing it on the stovetop, but it sure was a lot easier and more hands off.

I used the quinoa in this recipe and it was really good. I made extra quinoa and had it as part of every lunch for the rest of the week. Any random leftovers that would be decent with it were thrown on top with some feta and this chickpea/cucumber/tomato salad. I had leftover grilled chicken, some odds and ends from our kebabs last week. I have always tolerated quinoa as a side dish, but never as a main course. I was surprised this week how full I felt after eating it. But not that gross full feeling. My afternoon desire to snack was totally gone, and I didn’t feel hungry until dinner. A big ass batch of quinoa will be part my new go-to lunch plans for the foreseeable future. 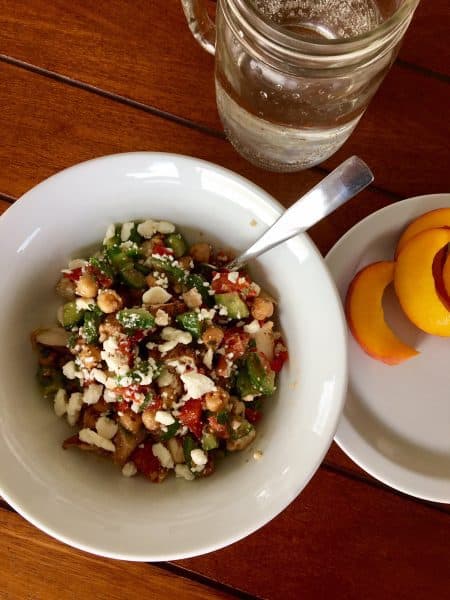 Last weekend, Troy and I saw Atomic Blonde. I love Charlize Theron and I love action movies, so this one was a no-brainer. It was really good. A lot of her walking around Berlin (Troy called it part fashion show), but the fight scenes were amazing. The clothes and music were insanely delicious as well.

For anyone who likes intense and nutso movies with good action, check out What Happened to Monday. Troy found it on Netflix, and it’s three kinds of crazy. The scenes are pretty graphic, so I warn you in advance. But it’s good! Just have a glass of wine first, m’kay? Or at least some cocoa. 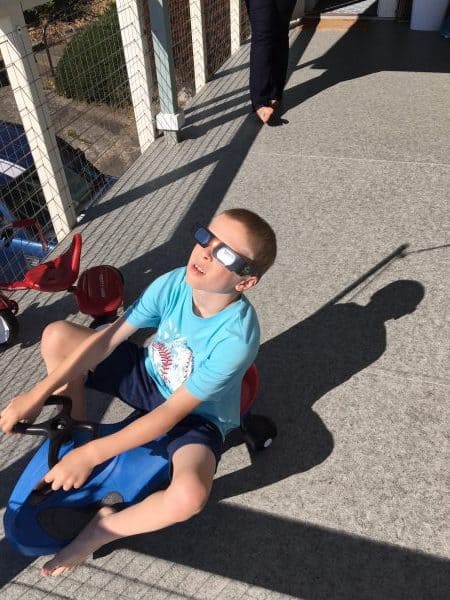 Jack has been obsessively talking this summer about having a Nerf gun sale. Like a garage sale, but just selling his old Nerf guns. When he gets an idea in his head, he doesn’t/won’t let it go. We finally were able to have it on Friday, and he unloaded about 15 various-sized guns. I usually applaud anyone with an entrepreneurial mind, but I had a lot of issue with this event. His main motivation for selling old Nerf guns was to buy new Nerf guns. He explained to me that he didn’t want the old ones anymore because they “were old, and not cool”. This has caused me a lot of angst and “where did I go wrong with this kid” moments. Troy thinks I am overreacting, but I think I am underreacting. Sure, all kids like new stuff, but Jack seems to take that to another level.

He is extremely blessed with family and friends who are generous, and the presents and gifts pile up. We almost never buy him toys for holidays, and try to stick to books and experiences. It isn’t to be righteous or anything; I just know with all the toys he gets from everyone else, he won’t notice we don’t give him any.

I’m starting to get anxious about his insistence that new is better and something no longer has value because it is more than three months old. And frankly, I don’t know how to fix it. I’ve done a lot of self-reflection about words that I use around the boys. Am I talking a lot about new things, or wanting more? I know I complain a lot about wishing we could remodel the kitchen. It’s something I have to work on along with them. We’ll figure it out. All I know is that the desire for more stuff and cooler stuff isn’t going to decrease as he gets older, and this issue won’t become easier to resolve. And as he gets older, he’ll be of age to volunteer at various community organizations, so hopefully, that will give him both perspective and a heart for serving others.

We had a three game soccer tournament yesterday. It was pretty much all soccer, all day. Jack had fun, and none of the kids managed to hurt themselves too seriously (despite the hysterical sobs a few times). Jack’s coach has never coached before or even played soccer, but she is awesome with the kids and makes sure they have fun. I played (fairly poorly) for almost 10 years, so I volunteered to help out on days when Troy is there and can watch Bennett/The Squirrel/Stinky. I was able to help at all three games yesterday and will lend a hand at the upcoming practices this week. Ya’ll, I had a BLAST yesterday. I didn’t realize how much I missed soccer, and the kids were mostly receptive to feedback. None of them actually internalized it, but they listened. 🙂 And since his coach has never played, I was able to help the kids with the technical aspects of the game. It got me thinking about coaching his team next year. I’m not sure how to make it work on the practice and game days when Troy is at work. Maybe I’ll put Bennett in a giant hamster wheel on the sidelines and throw some snacks at him from time to time.

I had a sports massage this week, and she did cupping on me. I’ve had it done before, but never by this therapist. I decided to forego tank tops for a few days to avoid scaring small children and the elderly. 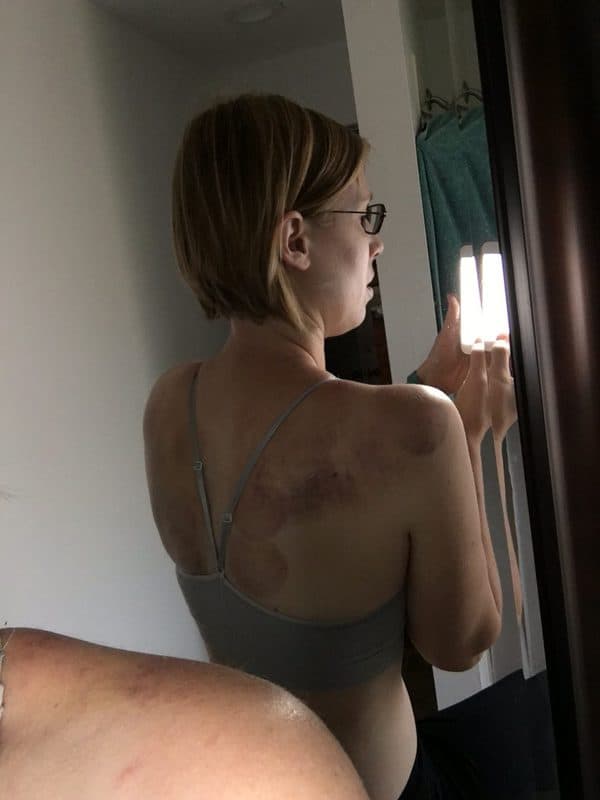 Monday:: Asian lettuce wraps (the shredded pork is in the freezer already), scallion pancakes from Trader Joes that my friend Kristina convinced me to buy, and spicy Asian green beans.

Tuesday:: Weeknight Eggplant Parmesan (basically this recipe but with eggplant instead of chicken), pasta on the side, and salad.

Wednesday:: Puff Pastry Sandwich Bakes, with green beans on the side.

Thursday:: Giving these Greek Turkey Burgers a try, paired with grilled zukes, and the cucumber/chickpea/tomato salad I can’t stop eating.

Friday:: Popcorn/movie/leftovers/fend for yourself night 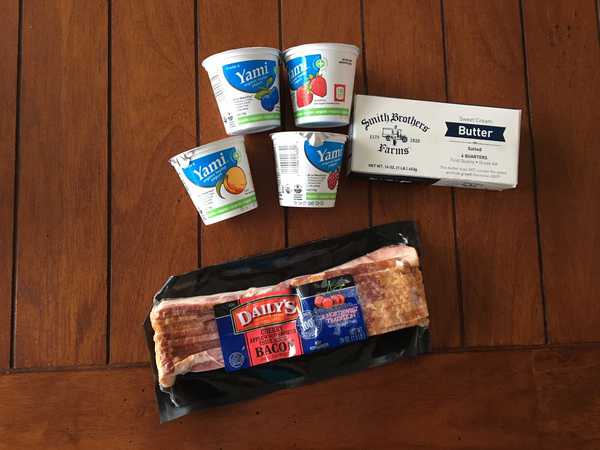 Costco – $55.14. I really hate single packaging items like yogurt tubes, but…they were on rebate and I can’t deny the convenience of throwing a frozen one in my purse for Bennett when we’re out and about. And freezing them and putting one in Jack’s lunch. Once these are gone, they’re gone. 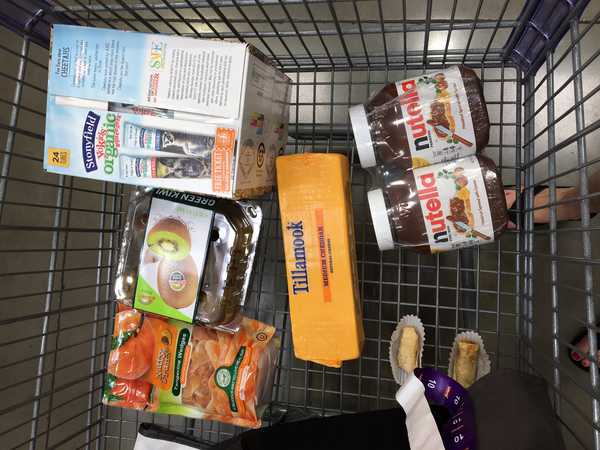 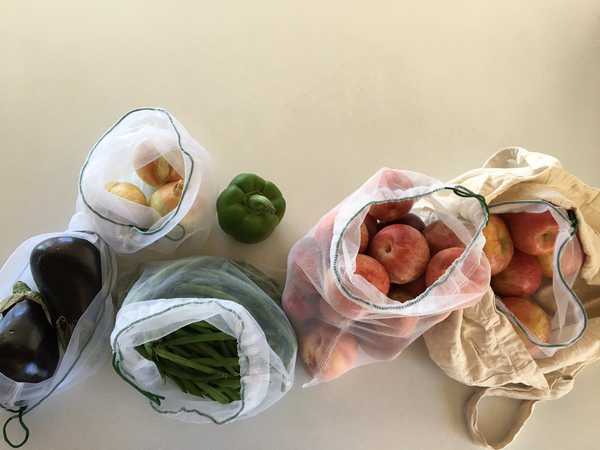 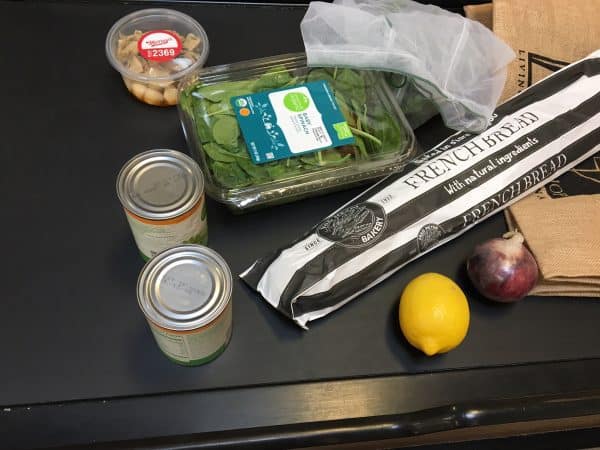 Parsley in the mesh produce bag

We were buying a ton of baguettes because the boys are super into them right now. At $1.99 a pop, I was getting annoyed with the cost. Not because $2 will break my budget, but I hate spending money on things that I know I can make myself and that taste better. I have a baguette pan that I found at Goodwill and have always used the fool-proof recipe in this book. I made a batch (two loaves) on Friday and will make more this coming week.